Every year, between February and June, the wildlife of South-western West Bengal’s biodiverse forests face an alarming threat. Thousands of hunters from local communities (both tribal and non-tribal)  venture into the wilderness to hunt animals -- purely for recreation, according to the Human and Environment Alliance League (HEAL). During these months, dozens to hundreds of such ‘hunting festivals’ may occur, attracting anywhere between 2,000 and 15,000 people each. Since 2016, HEAL has been working tirelessly on-ground each year to highlight these hunts and reduce the number of killings. Sanctuary received the following update from HEAL co-founders and Sanctuary Wildlife Service 2020 Award winners Meghna Banerjee and Suvrajyoti Chatterjee on the organisation’s work to reduce the impacts of the hunting festivals that were conducted in April 2021.

In addition to the mindless devastation of wildlife, the hunting festivals pose a public health concern, as they could even be a super spreader event with thousands of participants while the second wave of the COVID-19 pandemic is ravaging the country. Moreover, consumption of bushmeat risks the spread of zoonotic diseases among human communities. 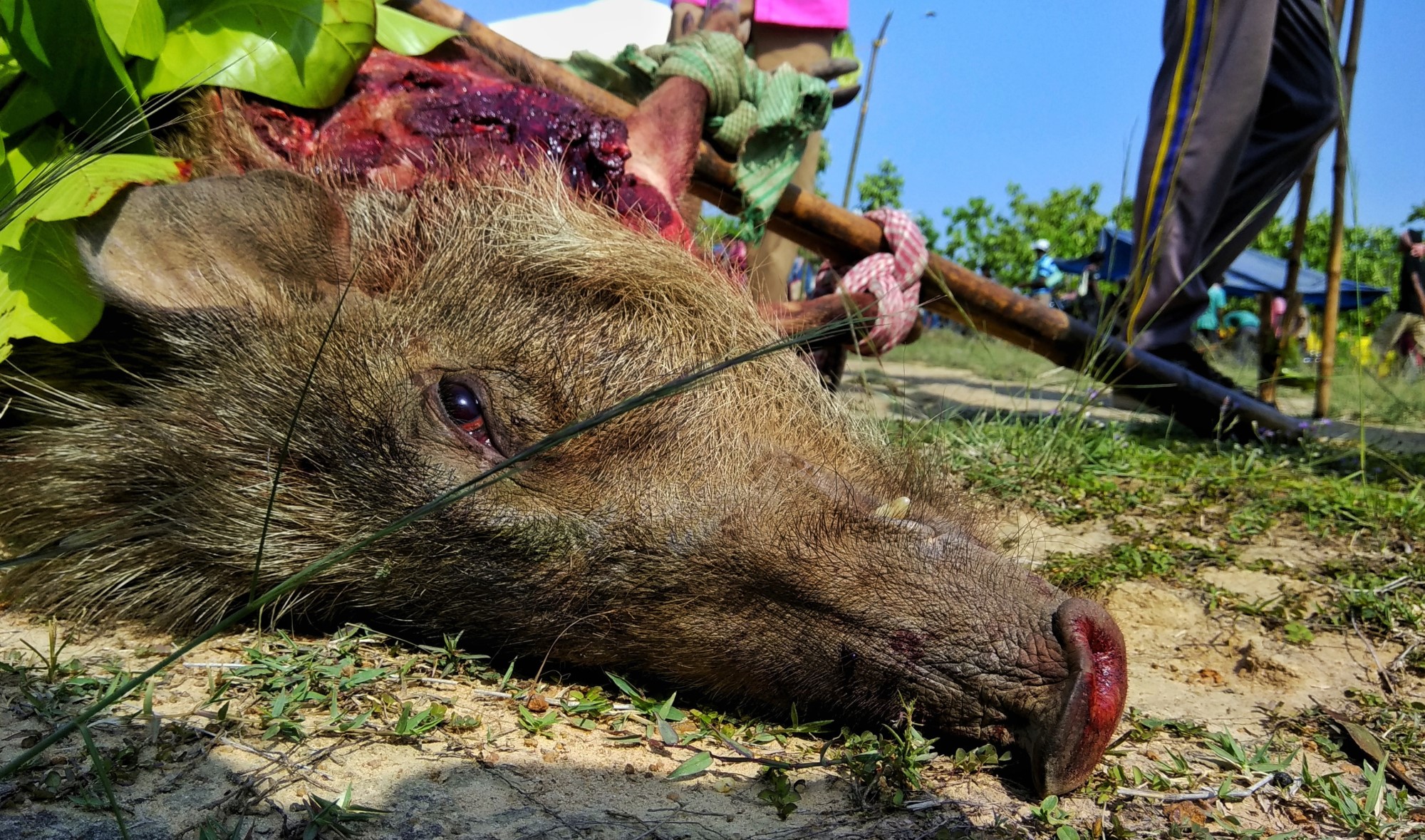 A wild pig killed by hunters during the Pakhibandh hunting festival on April 13, 2019.

The active involvement of the Police Department played a major role during the hunting festival on April 13, 2021, at Pakhibandh area of West Medinipur-Jhargram. With their aid, a large number of hunters were prevented from congregating to kill hundreds of wild animals in the garb of ritual hunting.

The West Medinipur Forest Division, along with the West Medinipur Police, set up checkposts at various strategic locations to monitor the entry of hunters into the Pakhibandh vicinity, the main congregation spot for the Chaitra Sankranti hunt. A significant number of police personnel patrolled the checkposts and the surrounding areas and stopped transport vehicles, including cars and mini-trucks, from taking hunters to the forests.

The effective intervention strategies adopted by the police and Forest Department helped reduce the number of killings on this day by tenfold! Instead of the usual 12,000-15,000-strong crowd, only about 1,000 hunters managed to reach Pakhibandh. Those who managed to defy the authorities’ restrictions did not have the comfort of their vehicles and were forced to walk seven to 10 km. in the sweltering summer heat. No kills were found at the congregation point where thousands of poached wild animals were unabashedly displayed in the open during the previous years' hunts.

Around 45 HEAL members and volunteers, including the members of the Howrah-based conservation group, Howrah Jela Jautho Paribesh Mancho, and Jongol Sathi team from Jhargram, were present at about six checkposts. Along with the West Medinipur Police and Medinipur Forest Division officials, they worked around the clock from early in the morning to engage with hunters and thwart them. Without their active involvement, the operation could not have gone so smoothly.

Jungle cats, tigers and various other species that are vital to their ecosystems are killed during the countless hunting festivals that take place across West Bengal. These images were taken on April 13, 2019 (jungle cat) and April 13, 2018 (tiger) at the Pakhibandh hunting festival.

In the past, HEAL has documented the hunting of hundreds of wild animals safeguarded under the Wild Life (Protection) Act, 1972, like jungle cats, wild pigs, monitor lizards, black-naped hare, numerous species of birds and even a tiger at the Pakhibandh hunting festival, and has been campaigning against this unlawful massacre. It is to be noted that hunting of any kind is prohibited under the Wild Life (Protection) Act, 1972, and there is no exemption provided for ritualistic hunting.

In 2019, HEAL had approached the Calcutta High Court, seeking immediate directions on the State authorities to stop hunting festivals in several districts of south Bengal, including West Medinipur and Jhargram. Pursuant to this public interest litigation, on April 18, 2019, the Calcutta High Court placed a complete embargo on ritual hunting or Shikar Utsav in various districts. The Court directed the Chief Wildlife Warden of West Bengal to take immediate steps for preventing the killings. The Court also directed the civil administration and police authorities to provide all possible cooperation to the Chief Wildlife Warden.

In a further order passed by the Calcutta High Court on March 26, 2021, in a suo motu action,, the Court reiterated its earlier stand regarding killing of wildlife during hunting festivals. The Court ordered that all such illegal activities, including hunting festivals, have to be completely stopped by the State by exercising police power, if needed. The Court also stated that non-implementation of this order in its letter and spirit will be looked upon as dereliction of duty and violation of this order by the officers of the state authorities entrusted with its implementation.

Hunters congregating openly during one of the hunting festivals that took place on April 19, 2021.

After our massive, collaborative efforts on April 13, we had assumed that the same success would be repeated at other hunting festivals. However, during the Dilli Shikar hunting festival at Arabari in West Medinipur and Jaypur in Bankura, major hunts were underway on April 19, 2021, where at least 3,000-4,000 hunters gathered at each of the two sites, and succeeded in killing a significant number of wild animals.

Our volunteers were present at Arabari since the early hours of the day, and we did not notice any police activity before 8 a.m., by which time vehicles carrying hunters had already reached Arabari. No checkposts were present, and many hunters were able to drive upto the hunt area. Even when the police and Forest Department arrived, their forces were not enough to control the large mob that had gathered unhindered at the hunt location. In contrast with Pakhibandh, no vehicles were seized. Emboldened by the lack of action, the mob grew aggressive. Hunters proceeded to capture wild pigs, monitor lizards and even bats (which is dangerous with the possibility of spread of zoonotic diseases). We managed to document some of the activities, but given the aggressive nature of the mob, it was difficult to estimate the actual number of kills. No dead animals were seized. Later, the hunters staged a roadblock on the highway, in protest of the resistance from administration and NGOs.

In Jaypur, a similar story played out, with hunters killing wild pigs, Indian hare, porcupines and birds. Reportedly, the Forest Department apprehended three hunters with a wild pig, but had to release them after being surrounded by a large and aggressive mob.

Unlike Pakhibandh, no pre-emptive measures were taken, such as manned checkpoints to stop vehicles or cordoning off the hunting spots. There appeared to be lack of adequate planning and coordination among the authorities.

Carcasses of several Black Francolin and Indian Pitta, caught by hunters on April 21, 2021, at Tamakbari, were seized later by the Forest Department.

In yet another violation of the Calcutta High Court's orders, Indian Pitta, Black Francolin and many more vital species were killed by locals during two hunting festivals in Tamakbari and Gopegarh in West Medinipur on April 21, 2021.

Tamakbari witnessed a congregation of about 2,500 armed hunters who captured Indian hare, wild pigs, Black Francolins (at least six) and other birds. Our team did not note the presence of enforcement authorities in the parts of the forest where hunting took place. We interviewed the hunters, who admitted that they were aware of the illegality of their activities. They further informed us that they were now taking home their catch without congregating at the end of the hunt, as was customary.

The hunts in Gopegarh took place in the same forest area where on April 3, 2021, HEAL encountered a large group of hunters carrying over a hundred dead wild animals, a few of which were later seized by the Forest Department. The gathering on April 21 was smaller and were able to carry out the hunted animals inconspicuously. Several species of birds were caught this time, including the Indian Pitta.

No hunters were arrested and no kills seized from either Tamakbari or Gopegarh on April 21, 2021. 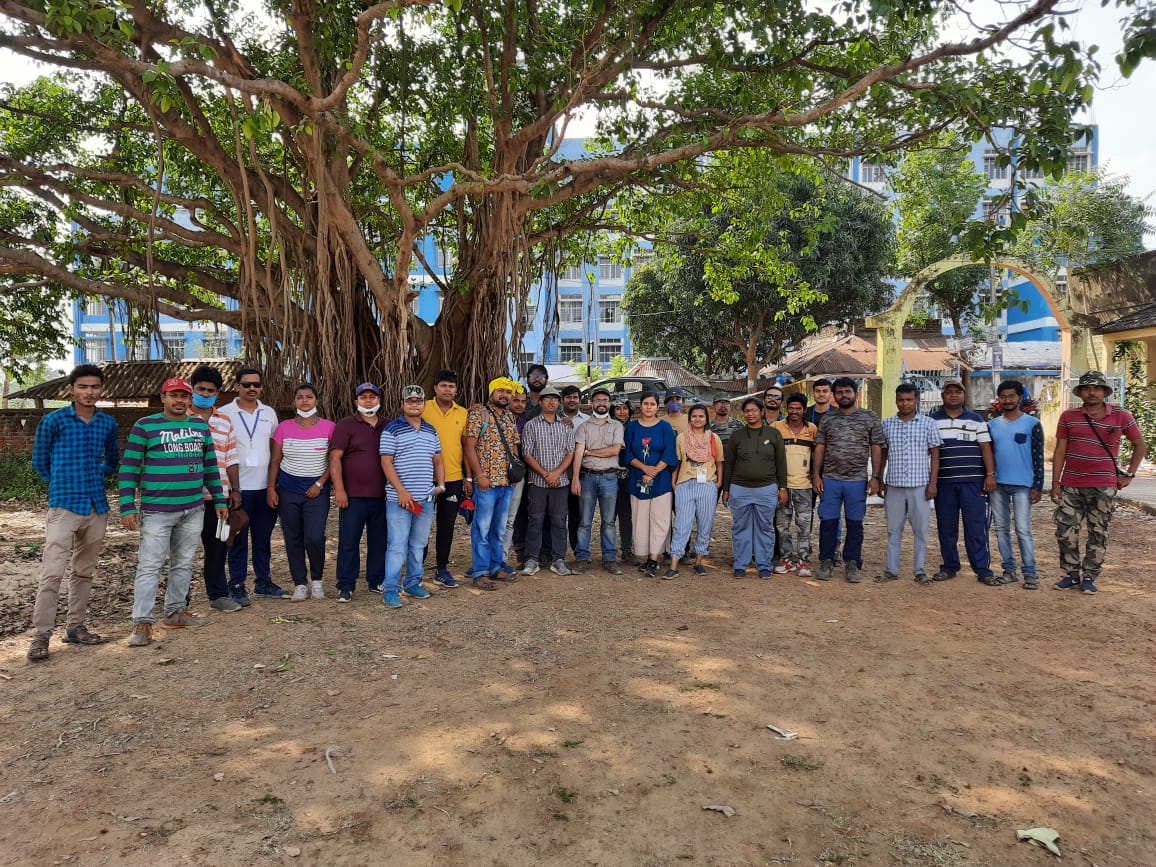 HEAL's team of dedicated volunteers helped curb many of the relentless killings that may have taken place at the various hunts that took place in the month of April 2021.

The entire months of April, May and June are populated with hunts. Sometimes several hunt fests happen at multiple locations on the same day. Hunters’ groups were also found by HEAL members on April 23, 27, 28 and 29, 2021, at various locations in West Medinipur, particularly inside forest patches, Even though congregations are being averted to some extent by the forest department personnel and police, hunters continue to enter forests with weapons to hunt wild animals even in the proximity of enforcement authorities.