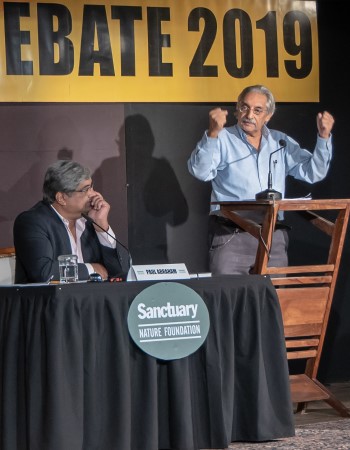 The Sanctuary Nature Foundation held its second annual debate on Friday, August 23, 2019 ween 7 p.m and 8.30 pm at the Godrej Theatre, NCPA, Nariman Point, Mumbai. An annual event the debate brought together luminaries from diverse fields to discuss pressing challenges to our environment and economy.

Mr. Paul Abraham, COO, IndusInd Bank, in his capacity as the Chair of the House, invited Mr. Adi Godrej, on behalf of the Godrej Group of Industries and Ms. Rohini Nilekani on behalf of Rohini Nikekani Philanthropies welcomed all guests.

The proposition put forward was:

“This House Believes that India’s Economic Security is Being Undermined by Biodiversity Protection Concerns”.

Speakers FOR the motion:

Speakers AGAINST the motion:

QUOTES FOR THE MOTION

Ajit Gulabchand: "Ours is a country gripped by poverty. This issue needs to be addressed immediately, and the question of biodiversity protection and its cost should be weighed against this carefully.... Economic development is the only way to bring the impoverished out of misery."

Rohit Bansal: "Poverty, hunger, economic growth - I agree all these are subsets of biodiversity. That being said, the issue of biodiversity clearly holds us in an antithetical position when it comes to weighing it against economic development."

R. Mukundan: "Environmental policies should be written to enhance the environment without hampering the living conditions of the people. The best way to protect the environment is by developing the economy. For instance, the interests of 200 million were put at stake to save all of 4 square feet of coral when the Coastal Road Project was stayed. Is this really the best way to go about it?"

QUOTES AGAINST THE MOTION:

Vandana Shiva: “Our pollinators that supply 1/3 of the world’s food and contribute €1.3 billion to the economy are dying. If the destruction of biodiversity creates a larger negative impact than the profits gained, you’re not running an economy.”

Nitin Desai: “I recall a study on the productivity of a crop field surrounded by trees Vs. one that was not. The one surrounded by trees had a significantly higher productivity. In Punjab, where trees have been cut down, farmers now pay beekeepers for help to pollinate crops.... The floods that recentlly ravaged India are a product of urban design that is not mindful of biodiversity protection."

Paul Abraham, in his capacity as Chair of the House commended both team for putting forth compelling arguments, and for agreeing to disagree without being disagreeable.

The Chair then asked the very engaged audience to vote by a show of hands, which saw the House Proposition defeated.

Thank you for registering!