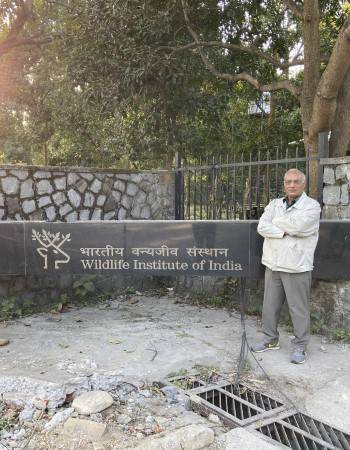 One amongst the old guard of India’s wildlife conservation movement, Vinod Rishi’s contributions span parks, states and disciplines. Born in Jalandhar, Punjab, he graduated as an engineer from IIT Delhi in 1968, and went on to complete a post graduation in AIFC, FRI, Dehradun (1971). Over his near 40-year-long career (Apr 1969 - Dec 2006) with the Indian Forest Service, Rishi has worked in every imaginable discipline in this field, discovering an India that few get to experience. He has worked for the management and conservation of several pristine sanctuaries and reserves, including the Sunderban Tiger Reserve, Buxa Tiger Reserve, Singalila National Park, Neora Valley National Park, Jaldapara Wildlife Sanctuary, and many more. His Government of India postings include: Additional Director General for Wildlife Conservation in India, Director National Forest Academy, First Director of Project Elephant, and positions in Project Tiger, Project Elephant, and the Central Zoo Authority. He was also the manager of the Darjeeling Zoo, an experience that taught him about animal biology which later helped him set up a successful projects in wildlife conservation - such as a captive breeding programme for snow leopards in southeast Asia, and the Red Panda Conservation Programme in Singalila National Park.

Vinod Rishi has also contributed greatly in implementing human-wildlife conflict resolutions in challenging landscapes like the Sundarbans. Beyond his direct contributions to wildlife conservation, he has always believed in imparting wisdom to the next generation. He was a Founding Faculty Member of the Wildlife Institute of India (WII) and served as Director of the Indira Gandhi National Forest Academy.

After retiring from the IFS in 2006, he is now based in Dehradun where he continues to work for the protection of India’s wild citizens. A man both humble and determined, Vinod Rishi is a guiding light for young men and women stepping into the fold of the Indian Forest Service.