"It was just a palm-sized baby; in four months it has grown to almost half a metre now,” Baba informs me, using his amputated forearm as a reference to the size. Donning a scarlet kurta with a mustard-coloured lungi and a pair of hawaai chappals that are about to give up, Sitaram Das, aka Baba, leads me to a mugger Crocodylus palustris, which is reportedly basking in a paddy field. Baba’s looks can be deceiving as there’s more to what meets the eye. He can be a Baba and a sought-after naturalist in a matter of sentences. 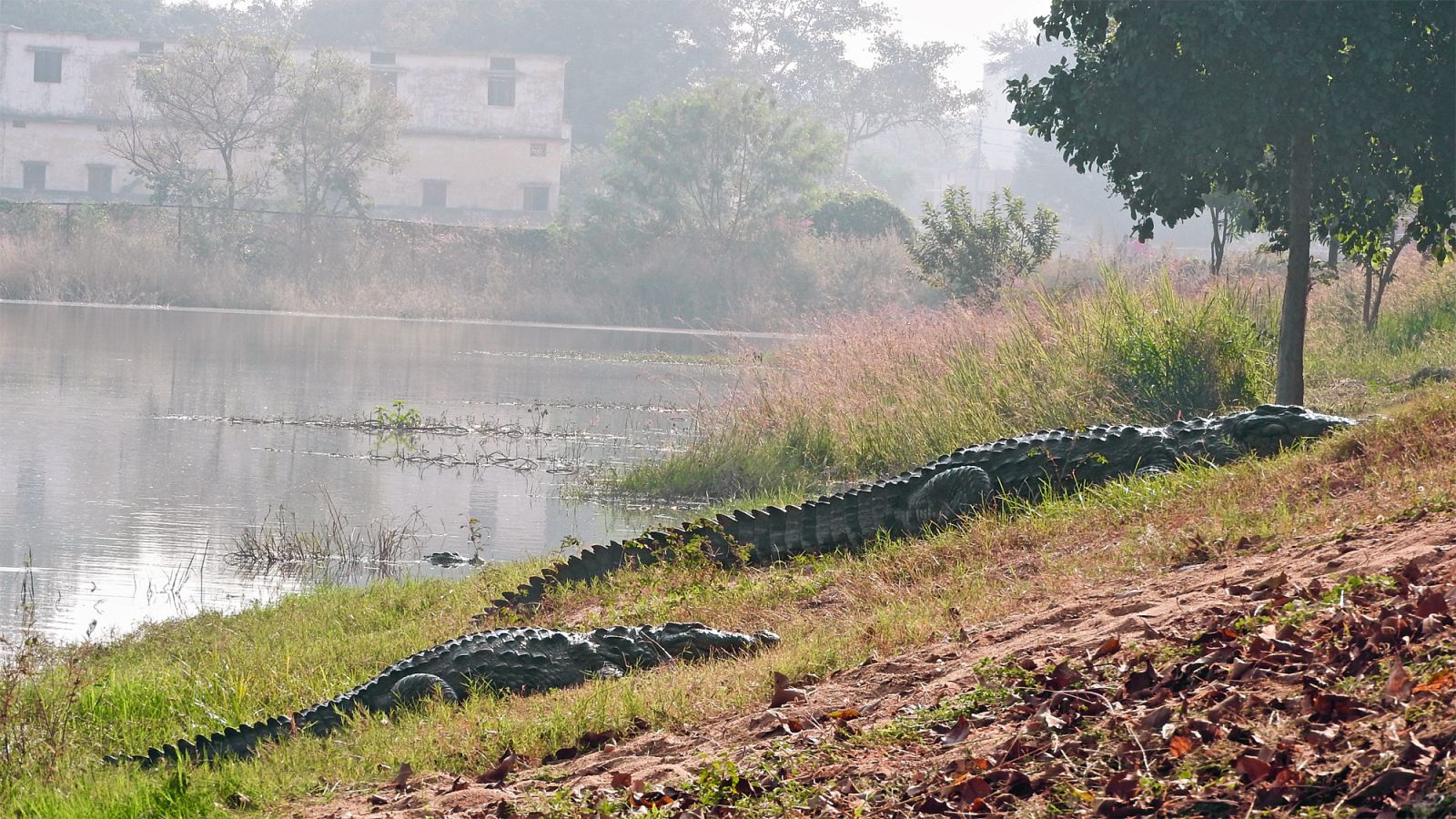 Baba has become synonymous with the natural habitat of Kotmi Sonar for devoting his life to the welfare of its resident mugger crocodiles.

We’ve been in the fields for hours now but there’s no trace of the mugger yet. While Baba strides forward with ease, I struggle to keep up. “It is a lethargic animal that gets tired easily and sometimes it takes days to move,” he quips, indicating that we may be moments away from finding it. “Six months ago, during the summers, a female mugger had laid around 20 eggs. It takes about two months for the eggs to hatch,” he adds. During our conversation, Baba casually passes on a great deal of species specific behavioural and nesting observations. The knowledge, attained in the wild through many years of observation, would perhaps impress the likes of John Thorbjarnarson even more. Inquisitive as I was, I asked about the people who were specially trained a few years ago to perform this task. “I don’t know, perhaps they’ve been trained to be scared,” he jokes.

We are in the Kotmi Sonar village of Chhattisgarh in the Janjgir-Champa district, 150 km. northeast of the state capital, Raipur. ‘Kot’ means a fort and ‘sonar’ is a goldsmith. Since there exists a plethora of Kotmi villages in Chhattisgarh, the suffix sonar was attached to distinguish this village (more so because the influential family here were goldsmiths). The Kotmi Sonar Fort, as referred to in ancient scriptures is a ‘Mrid durg’ (Mud Fort), identifiable by mud ramparts (PrÄkÄr) surrounded by a ditch (ParikhÄ). It is now in ruins. Its magnanimity and historical significance can be estimated through its physical features and archaeological findings suggest that the fort is around 2,500 years old. 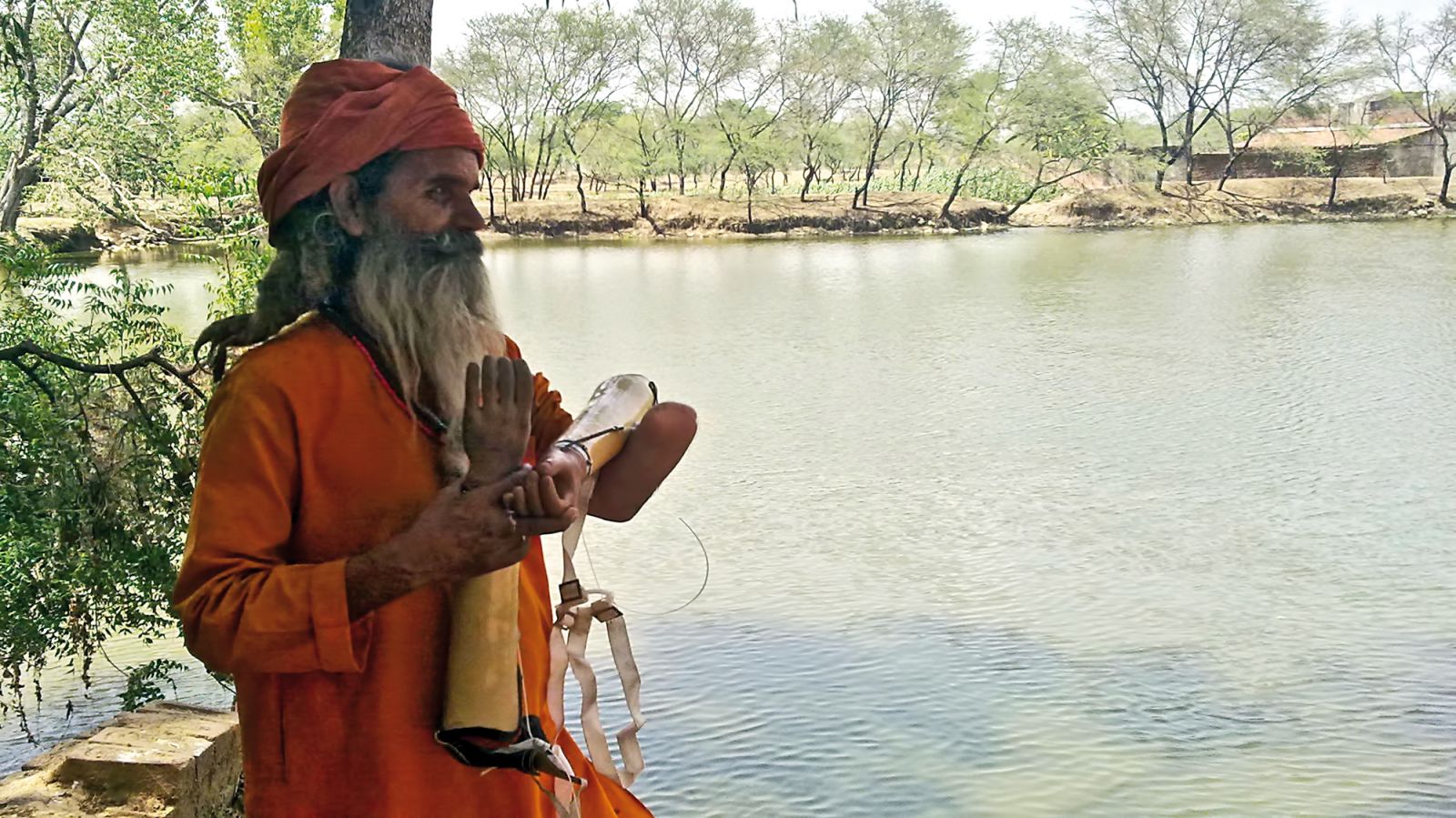 Baba has become synonymous with the natural habitat of Kotmi Sonar for devoting his life to the welfare of its resident mugger crocodiles.

Crocodilian science is relatively new, with studies dating back nearly 300 years. Barring the two species, namely the New Guinea crocodile and the Philippine crocodile that were described in 1928 and 1935 respectively, all known crocodile species were described between 1758-1828. However, our associations with crocodiles are well reflected in mythology and folklore, which provides us with a deeper sense of association with the reptiles. Mugger or ‘makara’ in Hindu mythology is the vehicle of the river goddesses Ganga and Narmada. With their motionless vigilance and revered mystical powers, the crocodiles provided the Kotmi Fort with an added layer of defense and in return the muggers had a suitable habitat in the moat that surrounds the fort. Intruders had to cross the ParikhÄ to reach the PrÄkÄr. Needless to say, no one dared to.

In 1961, British Zoologist Hugh B. Cott first drew the attention of the scientific community towards the need for crocodilian conservation. Around the same time, a 25-year-old Sitaram Das came to Kotmi from Uttar Pradesh. Leaving behind the responsibilities of family life, he began residing in the Ram temple adjacent to the Jogia talab. Over the years, Baba became familiar with the natural habitat around him and soon discovered that Jogia talab was a nesting site for the muggers. “As there are various ponds around this area, it is ideal for muggers to live in and in particular, the Lilagar river, a tributary of Shivnath flowing by the village completes their habitat requirement,” explains Baba. Wetland estimate studies still reflect the Janjgir-Champa district with the highest wetland area in Chhattisgarh. 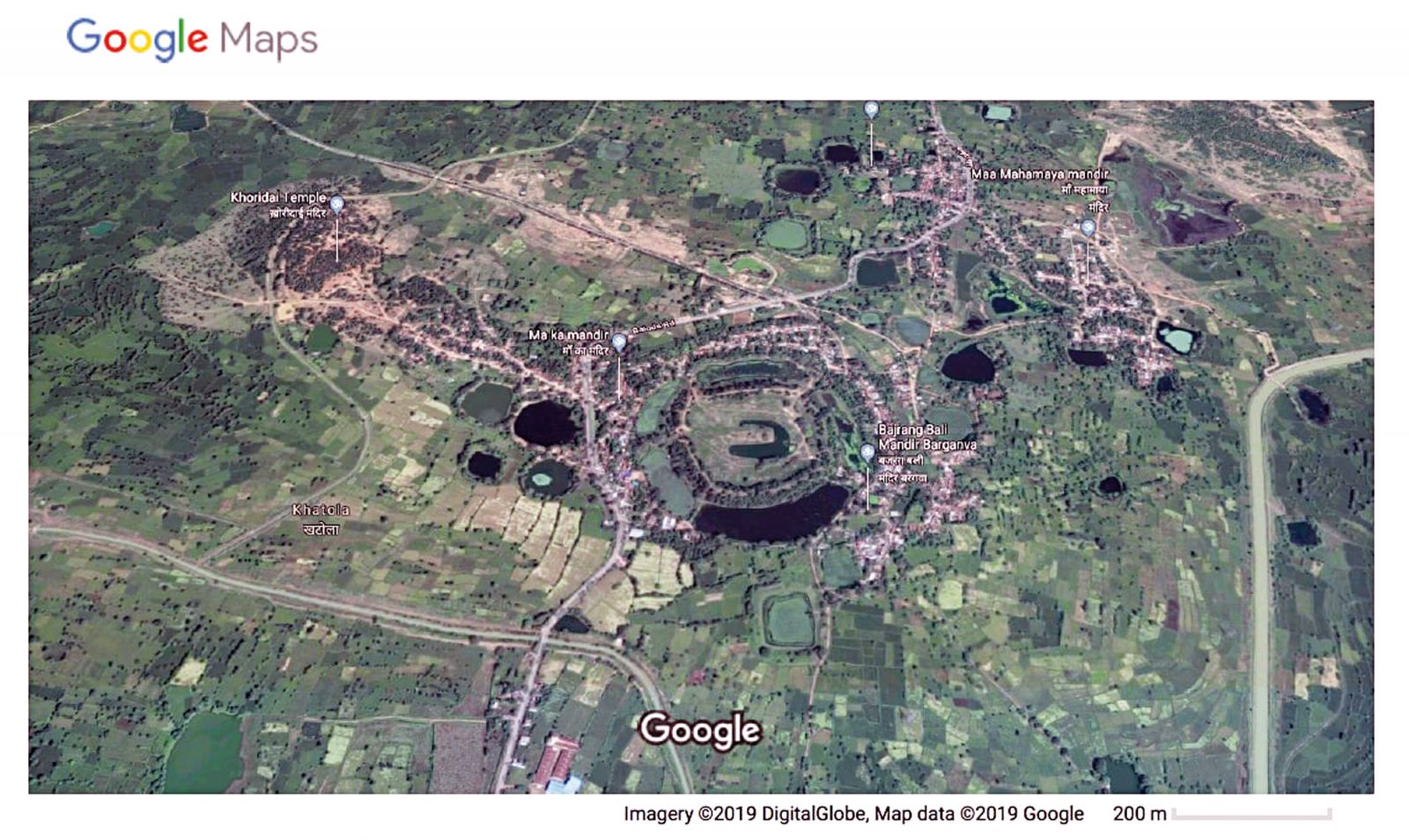 A Google Earth view of the mud rampart and its surrounding moat adjoining Kotmi Sonar village.

Worldwide concern for crocodile conservation gathered pace in 1971 when the IUCN created a CrocodileSpecialist Group, chaired by Hugh B. Cott. India responded with the Wildlife (Protection) Act 1972, which extended protection to all three of its crocodile species plus a host of other plants and animals. By 1976, the Madras Crocodile Bank Trust had been established by Zai and Romulus Whitaker to safeguard crocodiles. All this, while other developments were also taking place in the central Indian region of Kotmi Sonar where Baba was protecting crocodiles and their habitats. According to Baba, serving Lord Ram meant serving the creatures around us. Jogia talab was gradually turned into a monitored, relatively safe hatchery for muggers.

The world was, of course, totally unaware of Baba, and he, the world. “Usually they do not require any special care, but some farmers give them a lift to the waterbody. Muggers make their land-water movements early in the morning here. When farmers start before dawn to prepare the field for sowing, they tilt their buffalo carts to act as a ramp for a mugger to climb up. On reaching the waterbody, the cart is tilted again to allow the muggers to slide out into the waterbody.” Baba narrates this with childlike joy in his eyes. In Kotmi, there have been only a few stray instances of mishaps involving muggers and humans.

After the failed attempt of finding the mugger in the field, we return to his home, the Ram temple. Baba points towards the three ponds adjoining the fields and concludes that it could have walked into any one of them. At the temple, he serves me with cow’s milk and I let the naturalist in him expound on the muggers in the area. “They love eating fish. Turtles are also relished and I have also seen them eating babies of other crocodiles. For nesting, they dig burrows in soft mud by the ponds in summer. Once the rains arrive, the thunder and lightning assist in cracking the eggs open.” Modern crocodilian science may discard this observation, but ‘The lost hero of science’ Alexander Von Humboldt surely would have conducted an experiment to test this. Baba has been shifting the juveniles to the bigger ponds safely, year after year. “They are all my children,” he adds. 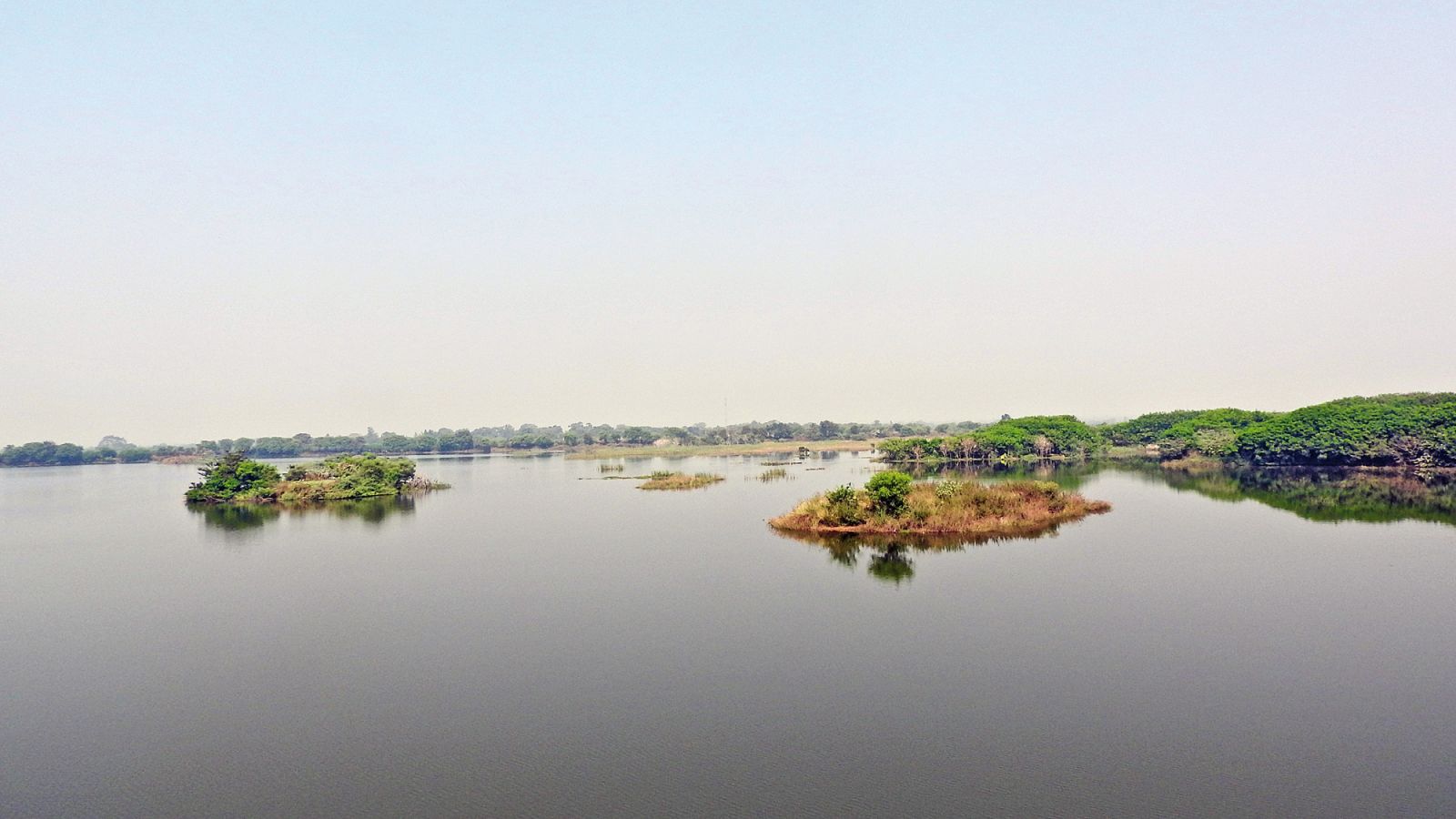 Muda Talab in the Janjgir-Champa district of Chhattisgarh harbours a sizeable mugger population and has become increasingly popular with tourists.

By 1989, we were celebrating the increase in the population of crocodiles in India and at the same time Whitaker highlighted the importance of ameliorating the locals’ fears, and he began educating them about conservation. It was becoming increasingly difficult in many areas to release crocodiles, because of opposition from locals who were unfamiliar and afraid of muggers. Jogia talab, by then, had begun witnessing an increase in the number of visitors, and Baba used the opportunity to enlighten children and locals about the muggers in their village. He began entertaining visitors and villagers by speaking about mugger behaviour, so that their nesting period would be respected. Baba had little idea about the global conservation imperatives and still has little idea of the global concern for the reptilians. At a time when crocodilian conservation was moving towards population biology, captive management and husbandry, Baba was implementing his own brand of conservation through ecological associations that involved no cost at all and were not part of any ‘project’ apart from his lifestyle.

I guess it would not be completely accurate to state that there was ‘no cost’ incurred. On April 1, 2006, Baba chased some kids who were harassing an incubating female mugger. Unaware of just how close he had approached the mugger, a sudden lunge and a jaw-clap left Baba’s forearm badly tattered and torn. Laughing loudly, he recollected the incident, saying: “I thought I had been called back by Ram, but when I realised I was alive, I understood that my services were still required.” “But you did not feel angry?” I asked. “Momentarily yes, but it was a misunderstanding. They are very sensitive while incubating eggs,” he clarifies. This incident led to the Forest Department laying the foundation stone for the Crocodile Park on May 9, 2006, which was inaugurated on August 23, 2008. Supported by a rich history, suitable habitat and a full-time naturalist, the creation of a crocodile park in Kotmi was only natural.

The only consolidated checklist of 45 species of reptiles under 29 genera of 11 families from Chhattisgarh, was published in 2005. Surprisingly Crocodylus palustris was not included on the list despite its obvious presence… for reasons yet unknown. 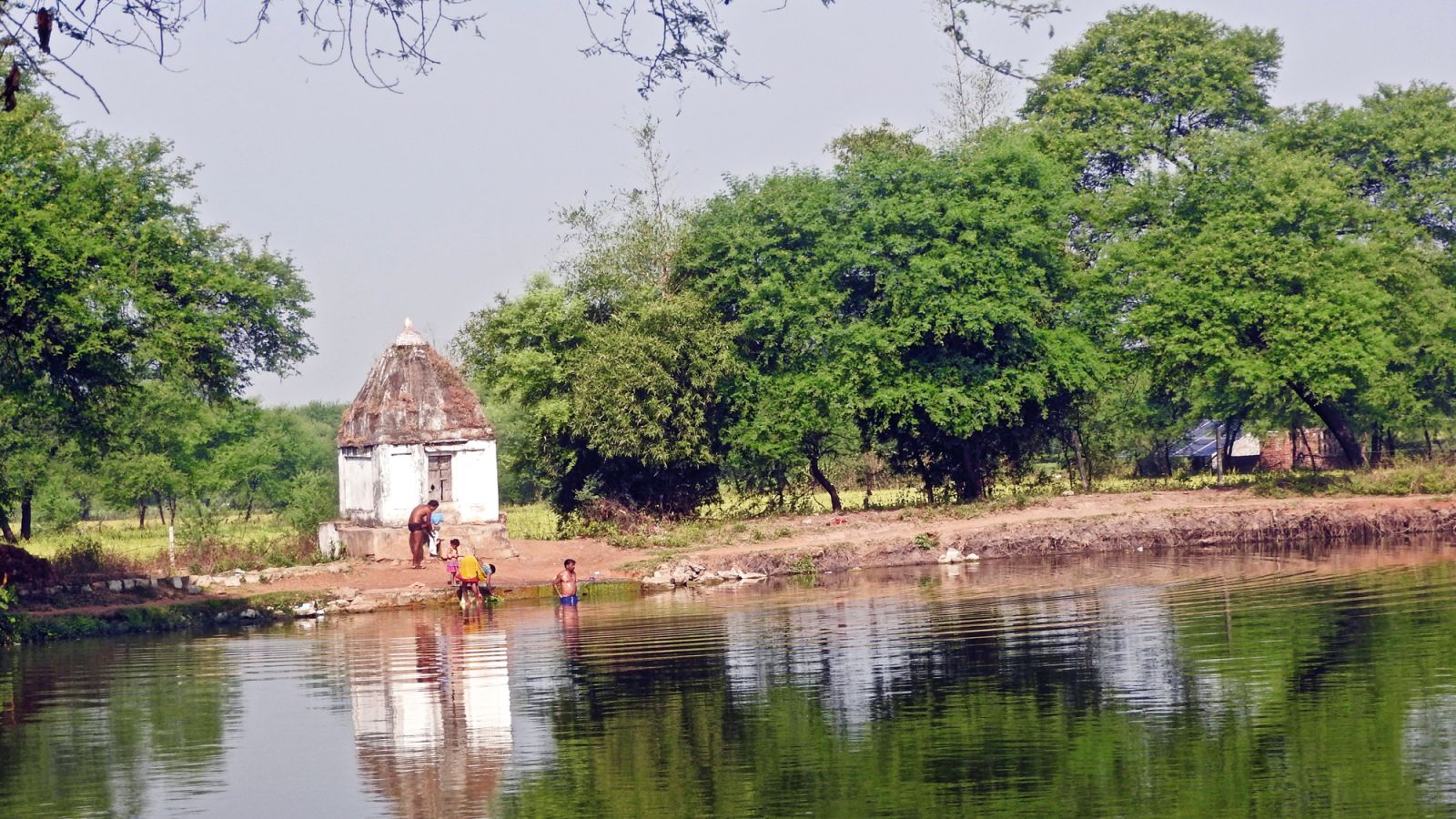 Allaying the fears of locals living with the muggers and educating them on their critical service to water bodies helped foster coexistence.

Thirteen years since the fateful day of Baba’s interaction with the croc, his lifestyle remains unchanged. He continues to protect and nurture muggers in the area, safeguarding their habitat, monitoring their breeding and assisting juveniles to safely negotiate their landwater movements. Often, when visitors fail to sight a mugger, Baba makes a distinct ‘Aao aao’ (come come) call, to which the muggers respond by showing up near the banks of the pond.

“You have dedicated your life to serving these Rams, what next now?” I ask. With his eyes still set at the paddy fields scanning for the kid, he responds as if narrating his will, “Bas, jab mai maru to mujhe inhe hi khila dena (not a lot… when I die, just feed me to them). 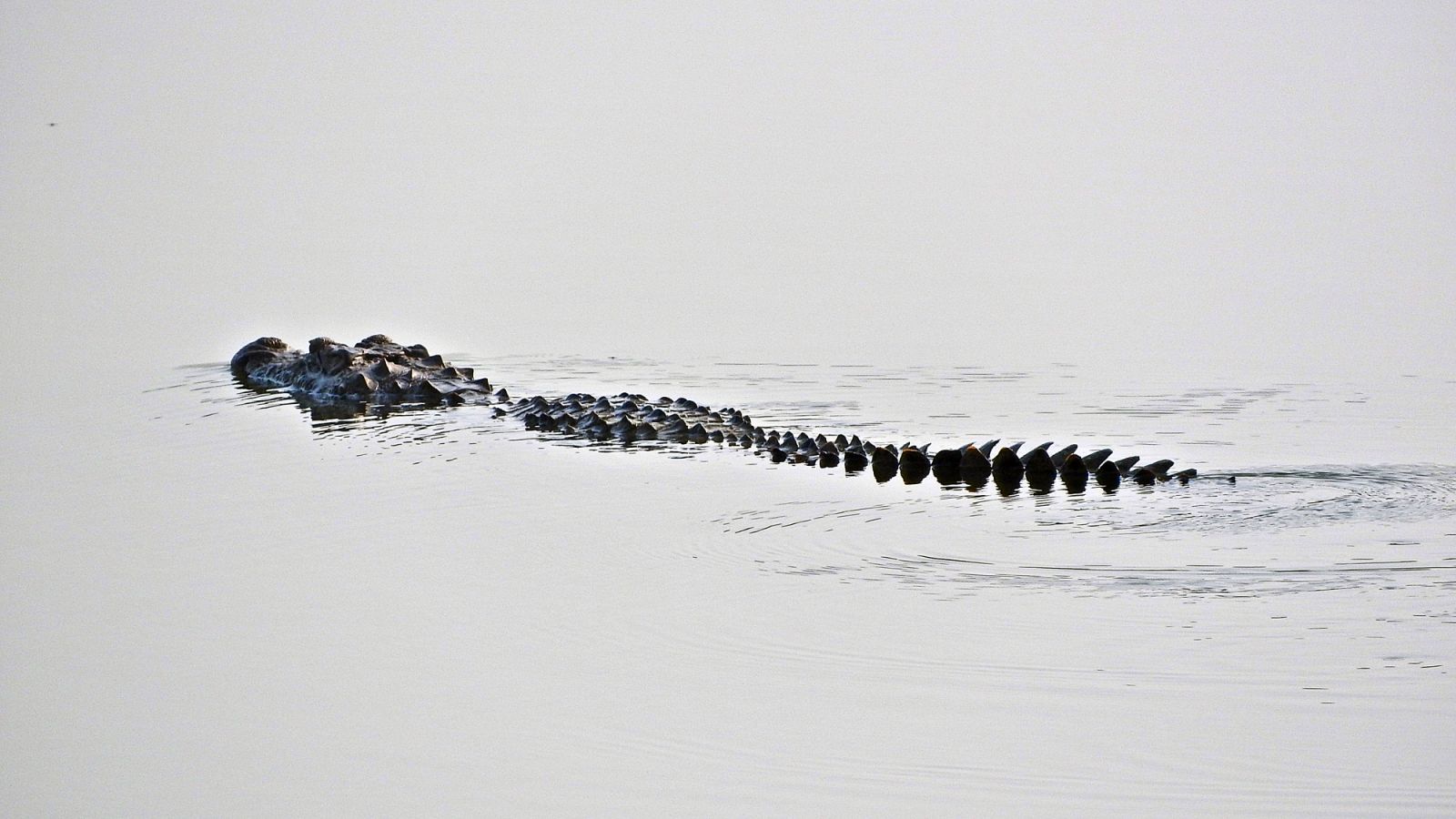 Since 1989, the concerted conversation efforts of several organizations such as The Crocodile Bank and individuals such as Baba, have enabled muggers to make a comeback in India.

Unlike in Kotmi Sonar, no crocodile savior has been able to stop the displacement of crocodiles in two waterbodies – Pachmuli lake and Khalvani lake – near the ‘Statue of Unity’ in Gujarat’s Narmada district. Several Indian crocodiles or muggers were lured into cages using fish bait and transported via pick-up trucks possibly to the reservoir of the Sardar Sarovar Narmada Dam. Dr Jitendra Gavali, Director, Community Science Centre, Vadodara, expressed his concern to DailyO saying the transfer of reptiles in such large numbers for making a seaplane terminal are “against the principles of the Wildlife Protection Act”. He also warned that if the slope of the dam was more than 40 degrees, female crocodiles would not be able to nest. A whole slew of other issues also come into play. No carrying-capacity study has been undertaken of the new site or efforts made to take cognizance of the behaviour of the crocodiles. India muggers are territorial animals and introducing so many animals into a reservoir could result in territorial fights and mortality.