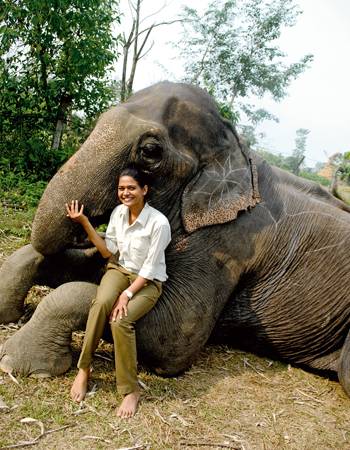 When 22-year-old Vineeta Yadav arrived at the Pugdundee Safaris lodge in Nepal’s Chitwan National Park as a naturalist, the management had little idea about the waves she was going to make. For the first month, she was a novelty specimen – gawped at by forest staff and villagers, who were unused to seeing a woman take the lead, as she drove the safari vehicle around the community forests and introduced tourists to its delights. Intent on assimilating, Vineeta intuited that the first barrier she would have to cross was that of language. So she befriended communities and colleagues, and persuaded them to
teach her Nepalese. As her language skills improved, she turned to the mahouts of the Elephant Camp to take her on as an apprentice and was soon spending all her free time with them and their mammoth wards. As her bond with the gentle giants blossomed, she worked to improve elephant upkeep, and established a Standard Operating Procedure for their welfare.

Dismayed by the portrayal of Nepal after the 2015 earthquake and the consequent slump in tourism, she convinced lodge management to join the ‘Safe To Travel Nepal’ campaign and began capacity building workshops for local talent. From teaching computer skills, to English and First Aid, these workshops empowered 50 individuals from the community. Even as Vineeta worked on social issues, she continued to hone her skills as a naturalist by attending training programmes and religiously walking in the wilds. A social-worker, naturalist and writer, she is currently pursuing an MBA in Business Sustainability from TERI University.

On clear nights, Vineeta Yadav would take tourists in Chitwan to see the camp’s elephants as they slept under a canopy of stars. The stillness of those nights and the peaceful slumber of the elephants – her reward for a long day’s work.