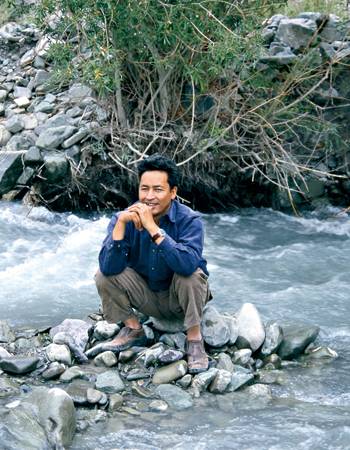 Sonam Wangchuk is the Founder Director of the Students’ Educational and Cultural Movement of Ladakh (SECMOL). Founded in 1988 by a group of students who had themselves been ‘victims’ of the alien education system foisted on Ladakh and its people, SECMOL strives to rebuild the lost pride and self-confidence of the Ladakhi people through its educational reforms programme ‘Operation New Hope’.

With the exception of religious training in monasteries, traditional Ladakhi culture had no separate process called ‘education’. Education was rather a product of an intimate relationship with the community and the environment, through which children learnt about the flora and fauna of their native land, their uses and how to adapt their life to the peculiarities of their environment. The Ladakhi culture has traditionally been one of self-sufficiency and harmony with the environment, as generations grew up learning how to make clothes from the wool of their sheep and shoes from yak skin, and building houses out of mud and stone. ‘Education’ thus imparted allowed successive generations to utilise resources in an effective and sustainable way. The advent of Western education in the 1970s, however, saw the steady erosion of this knowledge and respect for the Earth. School became a place to forget and even look down on traditional skills and knowledge. The medium of instruction was Urdu and English, alien to the vast majority of Ladakhis, leading to a failure rate of 95 per cent. This caused people to lose their self-reliance, self-esteem and connections to their roots.

Himself a victim of this failed system, Wangchuk decided to return to Ladakh and try and bring in educational reform. With this in mind he founded SECMOL and launched Operation New Hope in 1994 to overhaul the public education system in Ladakh, making it culturally and environmentally relevant. An engineer by training, Wangchuk is passionate about solar energy and has designed a low cost solar water heater that provides hot water to all residents on the SECMOL campus. All the buildings on the SECMOL campus have been designed such that they trap the maximum amount of heat in the day. As a result the 20,000 sq. ft. SECMOL building does not use any fuel for heating, even in winter when temperatures are as low as -250C! SECMOL is currently helping to design and oversee construction of several school buildings in Ladakh so that these principles get implemented in a larger way, reducing Ladakh’s fuel burden.

Wangchuk has also been instrumental in publishing Ladakh’s Melong, the only magazine in the region (in English and in Ladakhi), devoted to regional news and environmental issues such as garbage, tourism impacts on Ladakh’s high-altitude wetlands, community-based tourism in Protected Areas such as the Hemis National Park, etc.