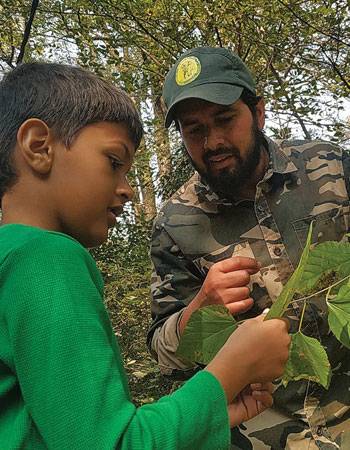 Think Jammu and Kashmir, and views of vast, snow-capped mountains and deep, unexplored forests spring to mind. And now, for us at Sanctuary… Shabir Husain Bhat!

A passionate naturalist born in Srinagar, he is one of Dachigam National Park’s most dedicated conservationists. Over the past 15 years, he has worked as a naturalist-guide, continuing an unbroken tradition passed down from the likes of the late Qasim Wani (Lifetime Service Award 2001 winner), Abdul Rahman Mir and Nazir Malik (Wildlife Service Awardees 2003 and 2016 respectively).

Even a short walk with Shabir through the magical forests of Dachigam, watered by the glacial Dagwan river, reveals the wonders of the park – the ‘old man’s beard’ Chionanthus virginicus billowing wispily by the path, bear droppings strewn on the forest floor and mulberries for them hanging on welcoming branches! Visitors who have walked with him call him the ‘Encyclopaedia’ of Dachigam.

Even as a child, Shabir was drawn to wildlife. He vividly remembers trekking mountains for birding and visiting the ‘Brein Nishat Conservation Reserve’ near his home to watch wildlife.

But it was one specific animal that gave Shabir definitive purpose and direction. And the Dachigam National Park was its only home. To date, the critically endangered and enigmatic hangul deer, or Kashmir stag Cervus hanglu hanglu (Sanctuary Vol. III No. 2, April/June 1983) continues to be the focus of his life. And joining the park as a naturalist and guide was the way he chose to wake up and sleep everyday in the proximity and service of the animal he loved.

Friends and distant family continue to exhort him to seek more lucrative jobs, but his resolve remains unwavering. The sight of elusive females with fawns, he says, is all the motivation he needs. His day is, of course, replete with creatures and plants he loves – the Himalayan black bear, for its critical role in seed dispersal in the forests, the golden-yellow autumn leaves of the mulberry plant, or the mighty oak and walnut forests that so typify Dachigam.

Shabir is fortunate to have the unconditional support of his immediate family for his life’s work. A visionary, he insists that the future of Dachigam and its natural wonders depend almost entirely on support from the hardworking communities living in Dachigam’s periphery. This is why we identified him as one of those chosen to be supported in every way possible. A son of the soil, he says with conviction born of experience that to conserve the endangered and not-so-endangered species of Dachigam, he intends to study their biology, ecology and behaviour.

Walking beside their tracks in the sand, lightly leaving his own prints behind, Shabir Husain Bhat belongs to Dachigam and Dachigam belongs to him. Like the hangul and Himalayan black bear, this jungle is
his home.