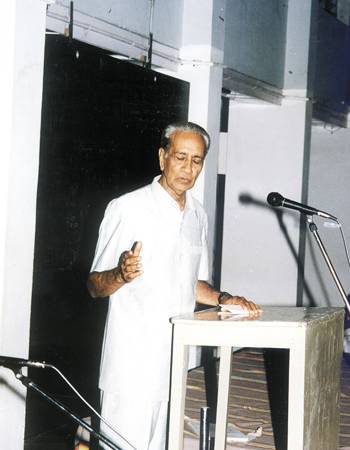 Tall, with a ramrod-straight figure and binoculars strung around his neck, 80-year-old S. Rangaswami seems to be living proof of Sálim Ali’s observation: “Those who watch birds need not age.”

Rangaswami’s range of interests is wide: teaching children about nature, admonishing their parents for using plastics, removing parthenium weeds, planting trees, creating compost pits, conducting systematic surveys of local flora and fauna, ministering to a flycatcher’s broken wing, devouring works of philosophy and nature, writing books, and letters to the editors of newspapers, lecturing to diverse audiences and drawing eminent naturalists to the Rishi Valley School, with which he has been associated for years. Birds, however, are his overriding passion.

Rangaswami came to Rishi Valley in 1973 to take on administrative duties as bursar, having sought premature retirement from the Air Force. He spent five years, devoting six days a week to accounts and administration, but on weekends he would set out birdwatching with a group of students in tow. In the process, he methodically listed 90 species of birds. He also presided over water conservation programmes, strategically locating small ponds and tanks for birds to drink from in summer. He also planted peepal and other bird-friendly fruiting trees, for an assured food source for the avians. He left Rishi Valley in 1977, but only after he had inculcated in a band of students a love for nature and an intimate knowledge of the flora and fauna of the region.

Rangaswami’s affair with Rishi Valley was far from over. He returned in 1990 with the specific purpose of creating an officially recognised bird sanctuary and to continue his field studies on the valley’s avian life. His survey indicated that earlier years of conservation had paid off as the number of species in the valley had more than doubled. (The most recent bird count in January 2001 stands at 201.)

In 1994, Rangaswami detailed these positive developments in a book, Birds of Rishi Valley and Renewal of their Habitats. Richly illustrated with photographs by his friend and co-author S. Sridhar, the book won favourable reviews in many leading newspapers and journals, including Sanctuary Asia.

In April 1997, he established a Department of Bird Studies at the Rishi Valley School, which was later upgraded to an Institute of Bird Studies and Natural History. The Institute draws visiting naturalists from various parts of the country. Mr. Rangaswami extended the range of the Institute’s activities further by designing an ambitious Home Study Course on Ornithology, for which he single-handedly wrote 24 out of 26 chapters in just two months! His contribution was not limited to just putting pen to paper. When it became necessary, he switched roles and became an assiduous fund raiser. The resultant corpus now supports a scholarship scheme for prospective students: housewives, senior citizens, school children and under-privileged members of society from most states in India.

Enough done, most might imagine. But Rangaswami now plans to conduct training courses in ecological restoration, bird identification in the field and bird census surveys for students in the summer holidays. Roger Tory Peterson, a world-famous naturalist perfectly sums up Rangaswami’s approach to conservation: “If we save the birds, in saving them, we will save the earth.”

He is a green teacher in every sense of the word and we honour and recognise him for setting an example for other teachers to follow.