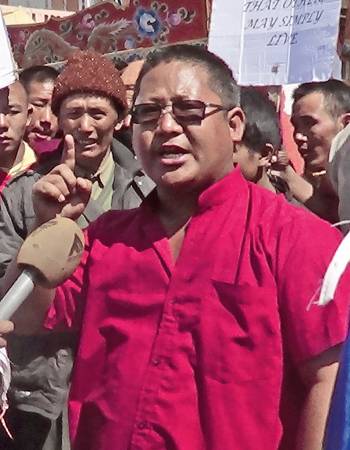 Lobsang Gyatso Rescuing helicopter crash victims in Tawang in 2011 changed the course of Lama Lobsang Gyatso’s life – drawing him from the monastery to active social engagement in the Tawang region of Arunachal Pradesh. Called ‘Anna’ Lama because of his fearless fight against corruption and rapacious development, his best-known contribution has been the campaign to protect the rivers, wildlife and culture of Tawang, home to the Buddhist Monpa community. Along with other Lamas and lay citizens of Tawang, this campaign has been spear-headed through the Save Mon Region Federation (SMRF), an organisation set-up to safeguard the ecological and socio-cultural security of the Mon-Tawang region. In response to an appeal filed by the SMRF, the National Green Tribunal (NGT) in April 2016 suspended the environmental clearance of the 780 MW Nyamjang Chhu hydroelectric project, which directly impacted a three kilometre stretch of the Nyamjang Chhu river, a critical wintering site of the vulnerable Black-necked Crane, one of only two such sites in India.

Locals consider the Black-necked Crane an embodiment of the sixth Dalai Lama, Tsangyang Gyatso, who was a local Monpa from Tawang and wrote about the majestic bird in his poetry. Since 2012, SMRF, led by Lama Gyatso, has fought the battle to protect Tawang’s rivers and culture at various levels – local rallies and campaigns, meeting parliamentarians in Delhi (resulting in a debate in the Rajya Sabha on the issue in May 2012), reporting environment and forest violations to the MoEFCC, media advocacy, community mobilisation, legal action and documentation of culturally and ecologically-sensitive sites affected by certain destructive hydroelectric projects. This included photographing the elusive red panda in proposed project-affected areas. The lamas in SMRF have also been unafraid to ask questions of authorities within the monastic institutions, which were silently watching the destruction of culture and ecology in the Tawang river basin.

Within weeks of the NGT verdict in favour of SMRF, Lama Gyatso was arrested when he was helping local villagers expose corruption in an under construction small hydropower project. Supporters demanding his release were shot at, leading to the death of two people in May 2016. Despite the major setback to the movement, Lama Lobsang Gyatso and SMRF continue their fearless battle to protect the rivers, wildlife and culture of Tawang. The public backlash after the deaths has forced the state government to take on board the crucial concerns raised by SMRF. Today, many villages in the area have also adopted Gram Sabha resolutions against destructive projects impacting cultural sites, livelihoods and wildlife species.