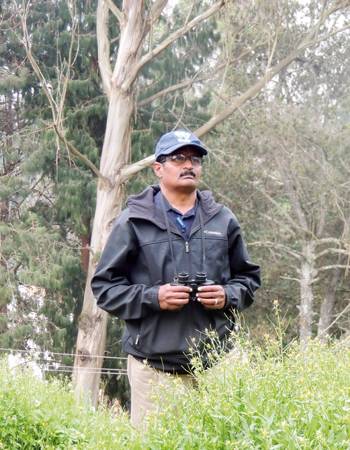 A seasoned warhorse, Jayachandran S. has been at the forefront of the fight to save the Nilgiri and Sathyamangalam landscape in Tamil Nadu’s Western Ghats for over three decades. It was in 1990 that he started the Tamil Nadu Green Movement and, ever since, this people-powered initiative has stemmed the onslaught of unscrupulous industries and the timber mafia on this global biodiversity hotspot.

Jayachandran has taken offenders to court with unwavering tenacity, opposing the construction of new roads such as the one along the Mettupalayam-Mulli-Ooty route in 1998-99; the widening of the Hasanur-Kollegal highway that runs through the Sathyamangalam Tiger Reserve and the  Biligiri Rangaswamy Temple Tiger Reserve; and campaigning against encroachments to secure the Kalllar-Jakkanarai elephant corridor in the foothills of the Nilgiris. These early victories saved thousands of hectares of prime forest, home to rare and endemic species, from brutal devastation.

As the Honorary Secretary of Nilgiris Wildlife and Environment Association, in 2009, his critical intervention in an ongoing case against the unregulated mushrooming of tourism infrastructure in the Sigur elephant corridor helped put an end to encroachments and illegal constructions in the area for good. He was also involved in protesting against the potentially-destructive establishment of the Indian Neutrino Observatory at Singara, a crucial elephant habitat. Through his untiring work, fighting legal battles, advocating for environmental rights and conducting educational workshops, Jayachandran inspires youngsters to join him as volunteers, many of whom go on to pursue careers in conservation.

He is a scrappy fighter, yes. But he’s also a solutions provider. By establishing a web of intelligence networks, he has been instrumental in helping the Kerala and Tamil Nadu Forest Departments bust poaching rackets, make seizures and apprehend hardened poachers. He has inspired many poachers to turn over a new leaf by surrendering their arms and ensuring alternate livelihood opportunities for them. Many of these ex-poachers today help the Forest Departments in blowing the cover on the modus operandi and operations of active wildlife criminals.

Jayachandran is a hero whose contributions it is impossible to justly chronicle. He is a man in whose steps we hope many more will follow.

And for this, we honour him.