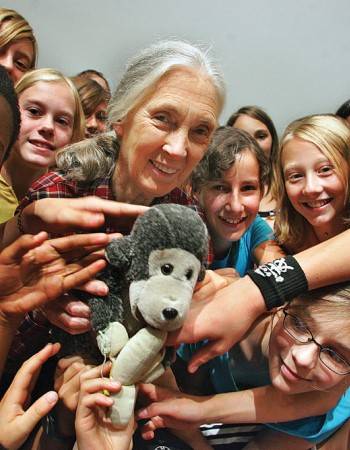 Jane began her life’s work of studying chimpanzee behaviour in July 1960, when she was in her early 20s. Following a childhood dream to watch wild animals in their habitat and learn about them through close and careful observation, she went to Gombe in western Tanzania to study chimpanzee behaviour under the guidance of world-renowned anthropologist and paleontologist, Louis Leakey.

In the forests of Gombe, Jane encountered many hardships and challenges, but eventually, as the chimpanzees got used to her presence, she was able to observe some of their most fascinating behaviours never known before. Among the many things she discovered was the fact that they made tools for extracting termites from their mounds.

One of very few people to be admitted into a Ph.D. programme at Cambridge University without a university degree, Jane received her Ph.D. in ethology in 1965. Her next goal was to defend a then-unpopular idea: that chimpanzees have emotions, minds and personalities of their own. That same year, National Geographic funded the Gombe Stream Research Centre.

In her decades-long career, Jane has written several books based on her research, been part of television documentaries and spoken to thousands of people around the world. In 1991, Jane and 16 Tanzanian students founded Jane Goodall's Roots & Shoots, a global environmental and humanitarian education programme for young people.

In  2002, Jane was appointed to be a United Nations Messenger of Peace. She was also made a Dame of the British Empire in 2004. In 2006, Dr. Goodall received the French Legion of Honor as well as the UNESCO Gold Medal Award. Her mission to take stories about the fascinating lives of chimpanzees to the public has taken her around the world, changing the way we look at wild animals.

Compassionate, courageous and undeterred, Jane Goodall is a living legend whose life story and legacy has become synonymous with hope.