The Rock Leopards of Chambal

Text and Photographs by Manish Hariprasad

I was in Kota, Rajasthan - a town known for Kota Doria sarees, Kota stone, and lately for the IIT-JEE/NEET coaching hub that it has become. However, it is not well-known as a major wildlife destination. While the town is on the banks of the Chambal river, famous for its gharial and skimmers, those are found more downstream towards Dholpur and Sawai Madhopur.

So, with little hope, but as is the habit of any amateur wildlife photographer, I began enquiring about the area’s wildlife, and received answers ranging from "You might see some bears, or maybe owls", to ''Nothing", especially given that it was the monsoon.

Given my affinity towards owls (my company is called Owlet Films), I decided to take my chances and head out on a recce. Mann Arya, a friend, and one of the finest local wildlife researchers and Conservator of Kota, accompanied me. Instead of on foot, we chose to take a Forest Department boat safari up and down the Chambal river for about 10 km.

A perennial river, the Chambal and its banks are home to a variety of species including two crocodilians – the mugger and gharial, freshwater turtles, smooth-coated otters, gangetic river dolphins, several birds and more.

We started off at 7 a.m., and within the first 10 minutes the landscape took my breath away. It reminded me of the Grand Canyon, the river flowing through the valley and sheer 90° cliffs on both sides formed by the crumbling Aravalis and the Vindhyas on either side. We saw a few muggers almost immediately, River Terns (which the boatman called White Kingfishers, perhaps because of a similar fishing technique), a few Grey Herons and a lone Bronze-winged Jacana.

Our eyes were glued to the sheer cliffs, the rocks and crevices. And then, quite abruptly, we saw it. A leopard, emerged from a dark cave, stretched, and after a short walk settled on a collection of rocks that resembled a giant lagori or pitthu, reminding us of its incredible balance and sure-footedness. One wrong step, and it would have fallen hundreds of metres down, into the Chambal, becoming a hearty meal for muggers. Having seen leopards earlier only in more forested habitats such as Kabini, or in Jawai where the rocks are at a lenient slope, I found myself a tad worried for its safety.

The female leopard navigating the rocky crevices of the steep cliff with uncanny ease.

As the leopard settled on the rock, so did we, stopping the motorboat mid-river. We realised that it was a female, and seemed restless. Was she injured? Or was she was pushed into these spaces by human movement above the cliffs (like every other hill/mountain/cliff in India, even these Chambal cliffs house temples, a Garadiya Mahadev temple in this case), or did she climb down to hunt and was now stuck… or was she troubled by the presence of a sloth bear that was a common sight on these cliff tops? Another likely theory was that perhaps there was another leopard in the area and she was looking to mate.

She began moving about, and suddenly disappeared behind a rock. We stayed on in the hope that she would emerge again. And she reappeared in a different spot, almost magically, highlighting how vast and labyrinthine the cave and crevice network was. This time, she was purring and growling, looking at a particular spot above her. We trained our binoculars there, only to see a huge male leopard sitting there, seemingly least interested in the female. We continued watching the pining female for the rest of the duration of the safari. The boatman confessed that he had never had such a wonderful sighting in the two decades he had been boating in this area. 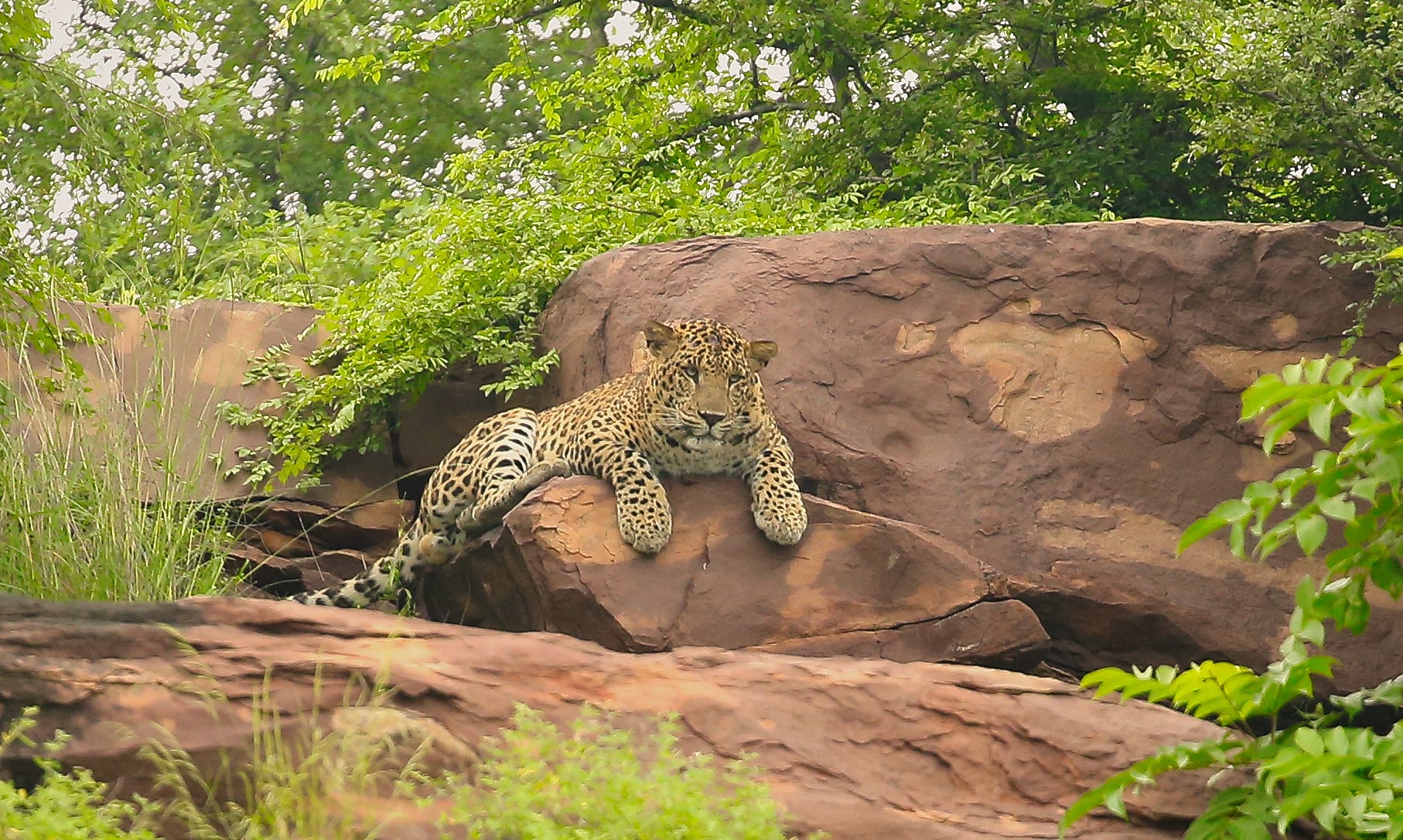 The male leopard resting on a cliff above.

I decided to do an evening boat safari a couple of days later, hoping to find the same couple. We didn’t. Maybe they weren’t there anymore. Or we couldn’t spot them amongst the rocks. While returning however, we were thrilled by yet another leopard sighting. Not the couple, but a solo male, in a completely different spot. On two subsequent evening safaris, I saw leopards, albeit a tad too far for reasonable photographs even with long lenses. I began wondering about the leopard population in this small area.

I soon earned a reputation for leopard sightings and word spread about the guy with ‘Cat-luck’, in part also attributed to the three tigers I saw on a solo Ranthambhore safari. Other actors and technicians took a few boat safaris and also reported seeing leopards on these Chambal cliffs. I had seen five different leopards in four safaris in a span of seven days! I was thrilled but still had a nagging wish to see the first leopard pair I had seen. They hadn’t been spotted post that sighting. Were they mates? Was the female leopard threatened by the big male, who wanted to take over her territory?  These questions were still unanswered, and the shoot was coming to an end. We had to leave the next day at one p.m.

On the last day, I decided to take another morning boat safari. Superstition took over despite being an atheist wildlife photographer. I decided to recreate the same circumstances as my first boat ride, asking for same boatman, the same boat, and even insisting that Mann Arya join me. He reluctantly came, without his camera gear, a fact he would later call the biggest mistake of his wildlife career, for we saw the pair again. A little further from where we had seen them last time, but unmistakably the same duo. It was even more dramatic, with clouds looming in the sky, the rocks still wet from the morning rains…

We saw the restless female first. Then we saw the male, and to our delight, he was a lot more active this time. Both occupied crevices on the cliff at different heights. The male occupied the higher tranches, and at one point the female walked right under him. If you imagine the cliff to be a Mumbai skyscraper, you could say that they were on 15th and 10th floor respectively. The female then looked around, standing on two feet like a sloth bear, and after having mapped her way up, began climbing towards the male leopard.

It was a spellbinding moment when they came face to face. Both growling at each other, the female being more aggressive and almost teasing the male. The growling and purring lasted for quite some time. And then, almost like snow-leopards chasing mountain goats in Ladakh, the male chased the female… The speed with which they ran in those inches of space, left us gasping, standing in a boat, seeing the mating drama unfold right above us. After a few memorable shots, we left the pair there, happy in the knowledge that they were a couple and not out to harm each other. 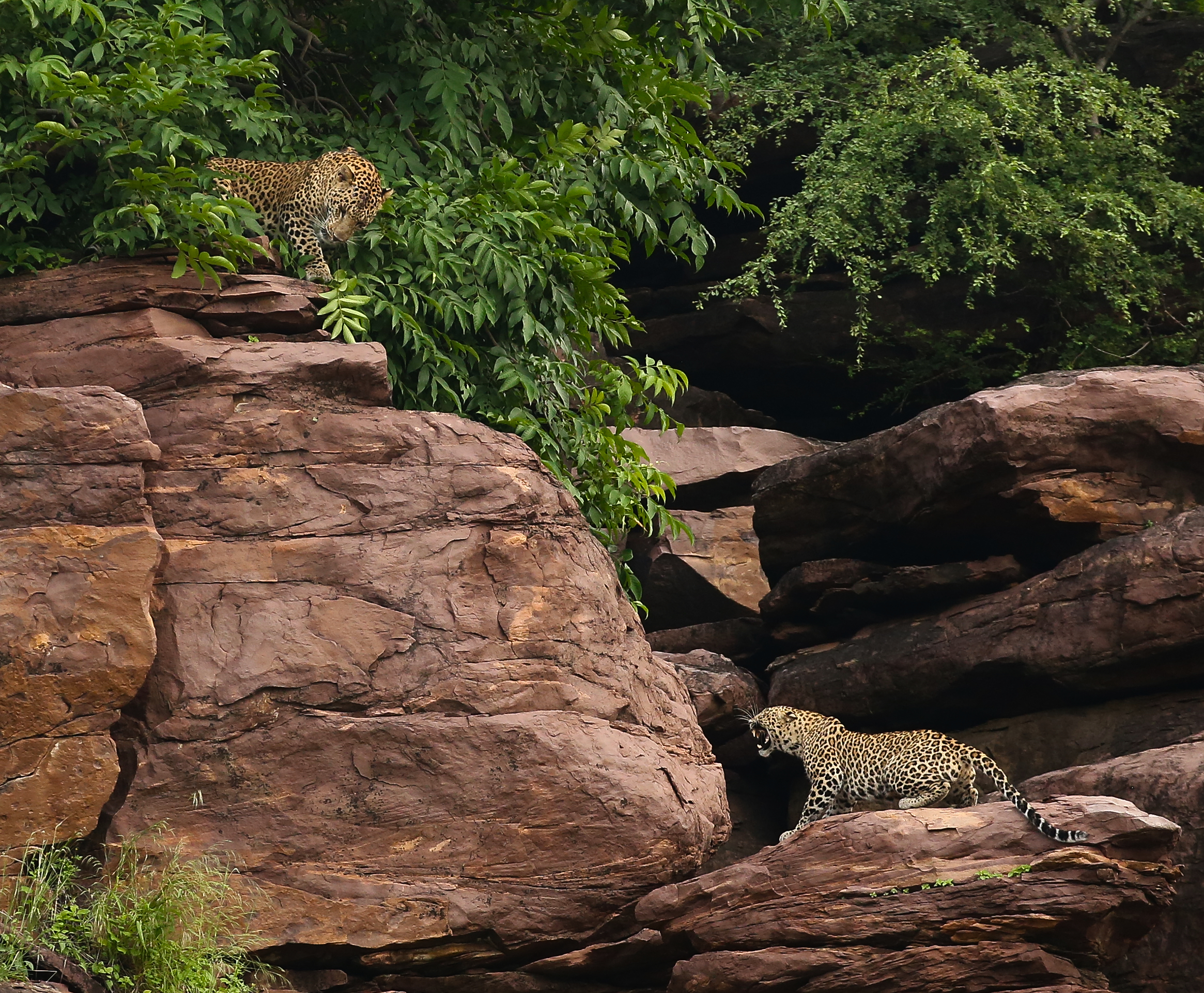 The couple engaged in a dramatic courtship, atop the cliff.

Other than leopards, on the Chambal boat safari in Kota I also spotted several Indian Long-billed Vultures, for the sheer cliffs are home to the largest breeding colony of these majestic and Critically Endangered birds. To see them soar from those cliffs, riding the thermals is a sight in itself. I also saw nesting colonies of Wooly-necked Storks, Peregrine Falcons, Grey Herons, Indian Eagle Owls, Dusky Eagle Owls, Shikras, Brown Fish-Owls, Bonelli’s Eagles as I waited for the ‘leopards of Chambal’.

I spoke to several local fishermen, engaged in solo fishing in the river, albeit illegally, when I was trying to follow the leopards. They had some fascinating stories of how the leopards here had learned to scare and push cattle down into a free fall from the cliffs, and then feast on the carcass. Black-faced langurs and rhesus macaques, that are often trapped in the city and released here, too make good prey for the leopards. The designation of Mukundra Hills as a tiger reserve would also provide extra protection to the leopards. 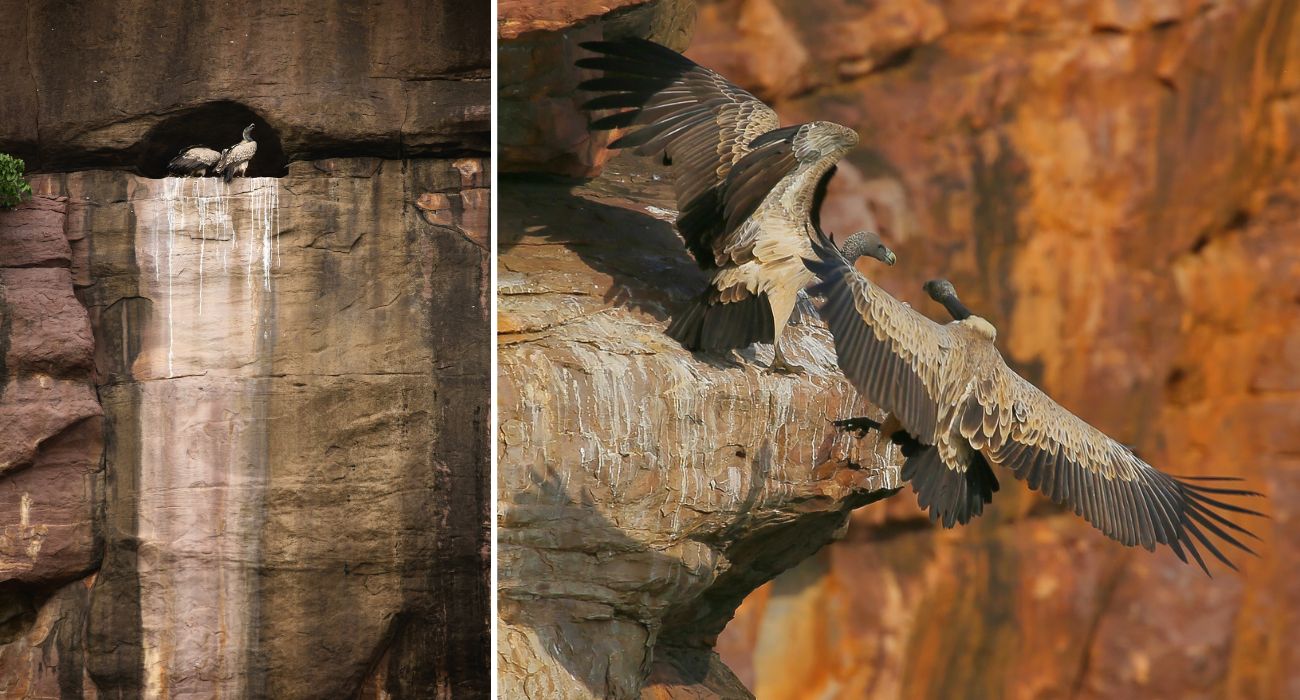 The cliffs of Kota host a large breeding colony of the Critically Endangered Indian Long-billed Vultures.

Uncontrolled human activity remains the biggest threat to these magnificent animals. In spite of the Forest Department doing a stellar job, there have been many shanties and temporary hutments that have encroached upon the cliffs, increasing the risks of human-animal conflict.

The fact that Chambal has remained one of the least polluted rivers, providing a home to muggers, dolphins, gharials and several other riverine species, while also housing a thermal power plant as well as a nuclear power plant, does give one hope that this habitat can be redeemed, and continue to be a home to the rich flora and fauna it supports. Only if it is protected.

Manish Hariprasad started his career with Ogilvy advertising, and soon moved to the movie industry with UTV Motion Pictures, where he was associated with making films like No One killed Jessica, Chennai Express, Dangal, Kai Po Che, Ghanchakkar, Saat Khoon Maaf and Luv Shuv tey Chicken Khurana. He now has a content production company named Owlet Films, that makes movies and web-shows. In his alternate life, he is a passionate birder and a wildlife photographer.