It is the height of the frost season – the driest part of the year in the Nilgiri plateau. The air is crisp and frigid, with not a trace of moisture. The dry, golden grass tillers seem sugar coated; ice crystals glittering in the sunlight. Inside a shola cloud forest, though, the air is usually still laden with moisture. Tree branches brim with mosses, ferns, orchids, wild impatiens, lichens, hornworts and clubmosses. The stream inside the pocket shola gurgles with nearly the same fervour as in the peak monsoon. This is the magic of the shola-grassland mosaic ecosystem that gives rise to hundreds of perennial streams. Yet, this year, as I stood inside one such shola patch, it was the first time I observed the stream reduced to a trickle – just a month since the end of the rainy season. All the epiphytes on the branches were drying and yellowing.

Spending years in this region, I know that landscapes, in their own way, protect their life forms. For instance, heterogeneity such as slope steepness and the sheer heights of hill faces can block out waves of habitat destruction that have otherwise swept across most of the plains. However, climate change introduces new pressures to these ecological spaces in the Nilgiris. 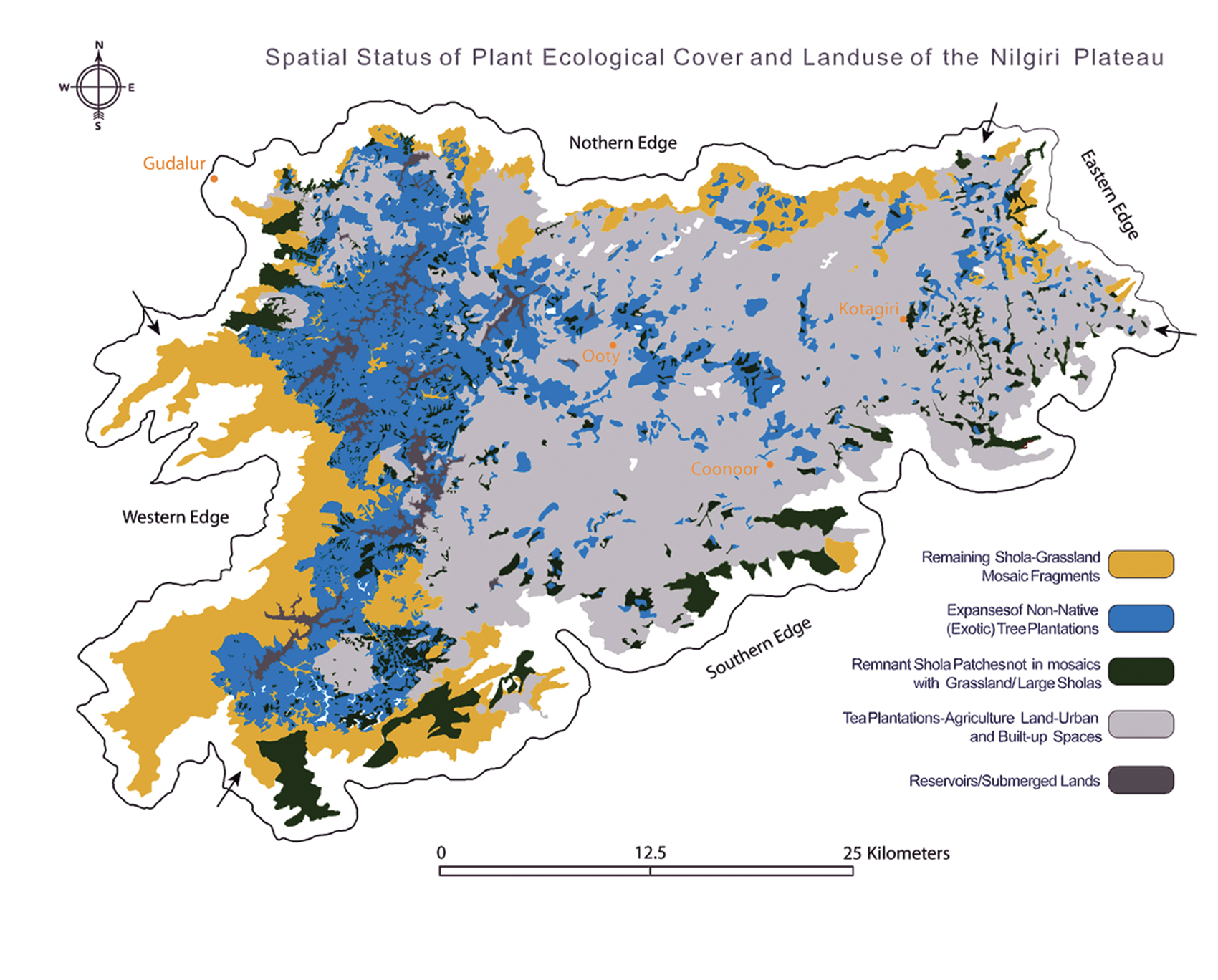 A Study In Restoration

Born in the Nilgiris, I studied at The School KFI in Chennai, where I grew up and lived. Nature education was a vital part of my childhood, and this, combined with frequent visits back home, led to my deep fascination for the Nilgiri biosphere.

Spread over approximately 2,000 sq. km., the Nilgiri plateau is an elevated tableland that connects the Western and Eastern Ghat mountains ranges. With an average elevation of close to 2,000 m., this entire plateau was home to the shola-grassland mosaic ecology, where 70 per cent of the plateau constituted grasslands and the remaining were sholas (forests). The shola-grassland mosaic ecology is extremely species-rich – home to over 1,200 species of plants and very diverse animal species. Many of the hill community’s lives and livelihoods were once intertwined with these ecosystems. But over the last few decades, destructive land-use patterns have taken over.

Non-native species such as Eucalyptus globulus (blue gum), Acacia mearnsii (black wattle) and cash crops like tea, all introduced by the British, disrupted the ecosystem and pushed back the native sholas and grasslands. Even after independence, the ecological displacement has continued apace. As a result, soil erosion, ground water depletion, soil nutrient loss and fertility reduction, the disappearance of streams and increased human-wildlife conflict have become commonplace. Climate change-related disasters including massive landslides, the hand maidens of extreme rainfall events, are scarring the landscape. Overall, less than nine per cent of healthy and pristine ecosystems remain.

I decided to learn about native plant ecology and restoration after participating in a course at the Gurukula Botanical Sanctuary, Wayanad. In these lush forests, I learned to observe and understand the complex interconnectedness within communities in nature. I looked at landscapes and ecosystems holistically to understand the complicated issues and pressures that affect them. I experienced working with nature’s regenerative capacities. Through individual projects, I developed the understanding that building true solutions is in fact a process of facilitating nature to unleash its magical self-repair systems. 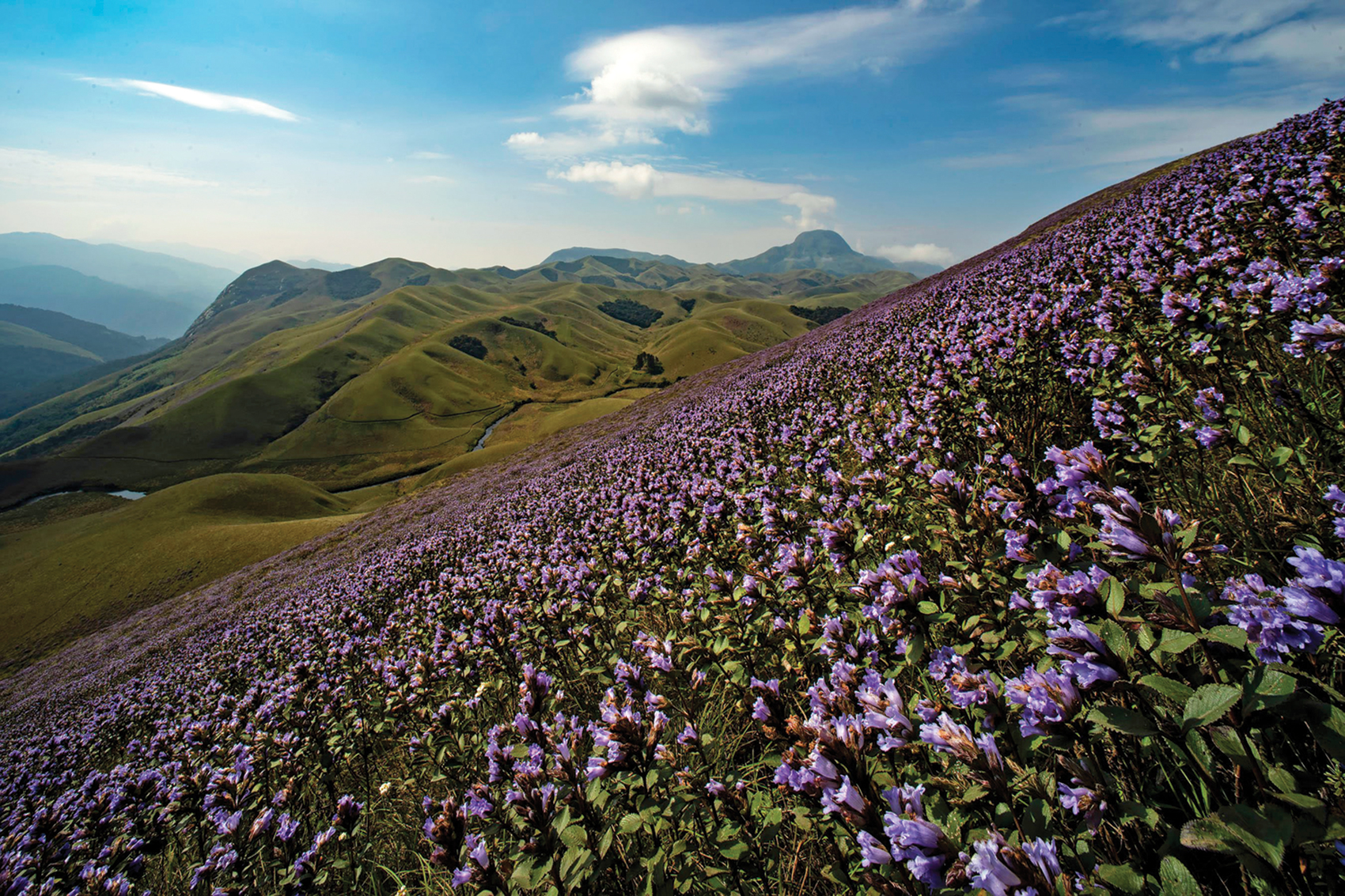 Grassland conservation is vital to protecting floral diversity. Species such as the neela kurinji Strobilanthes kunthiana, which flowers once in 12 years, need intact native grasslands to grow in and thrive. Photo: Sandeep Das/Sanctuary Photolibrary.

It’s Not Just About Trees

Returning to the Nilgiris, I spent the initial years learning about native plant ecology and their status, while conducting restoration drives to tackle the invasion of exotic plants into remnant grassland tracts. I soon understood that it was critical that I began working on restoring these habitats.

So far, across the globe, ‘greening’ initiatives and projects have largely focussed on ‘planting trees’. This trend continues to this day.  Such interventions are problematic when the planting is done with exotic tree species, or with a single, fast-growing species, or, as in most cases, done in areas that originally did not support a tree type ecosystem –  such as grasslands or shrublands. This is especially true in the case of the montane grasslands of the Nilgiri plateau. Grasslands were long considered as wastelands and subject to systematic ‘afforestation’ drives, using alien tree species from Australia.

I set up a native plant nursery around eight years ago – perhaps the first of its kind that nurtures grassland and shrubland species, though I also propagate diverse endangered shola trees. I grow all the major native tussock grasses that form the basal plant community of the grasslands here – such as Chrysopogon nodulibarbis, Themeda triandra, Andropogon polyptychus and Dichanthium foulkelsii. Some of the other rare and endemic species that are propagated are Anaphalis neelgheryana, Strobilanthes lanata, Strobilanthes consanguineus, Crotalaria formosa, Eriochrysis rangacharii, Syzygium calophyllifolium, Impatiens munronii, Magnolia nilagirica and Rhododendron arboreum var. nilagiricum. 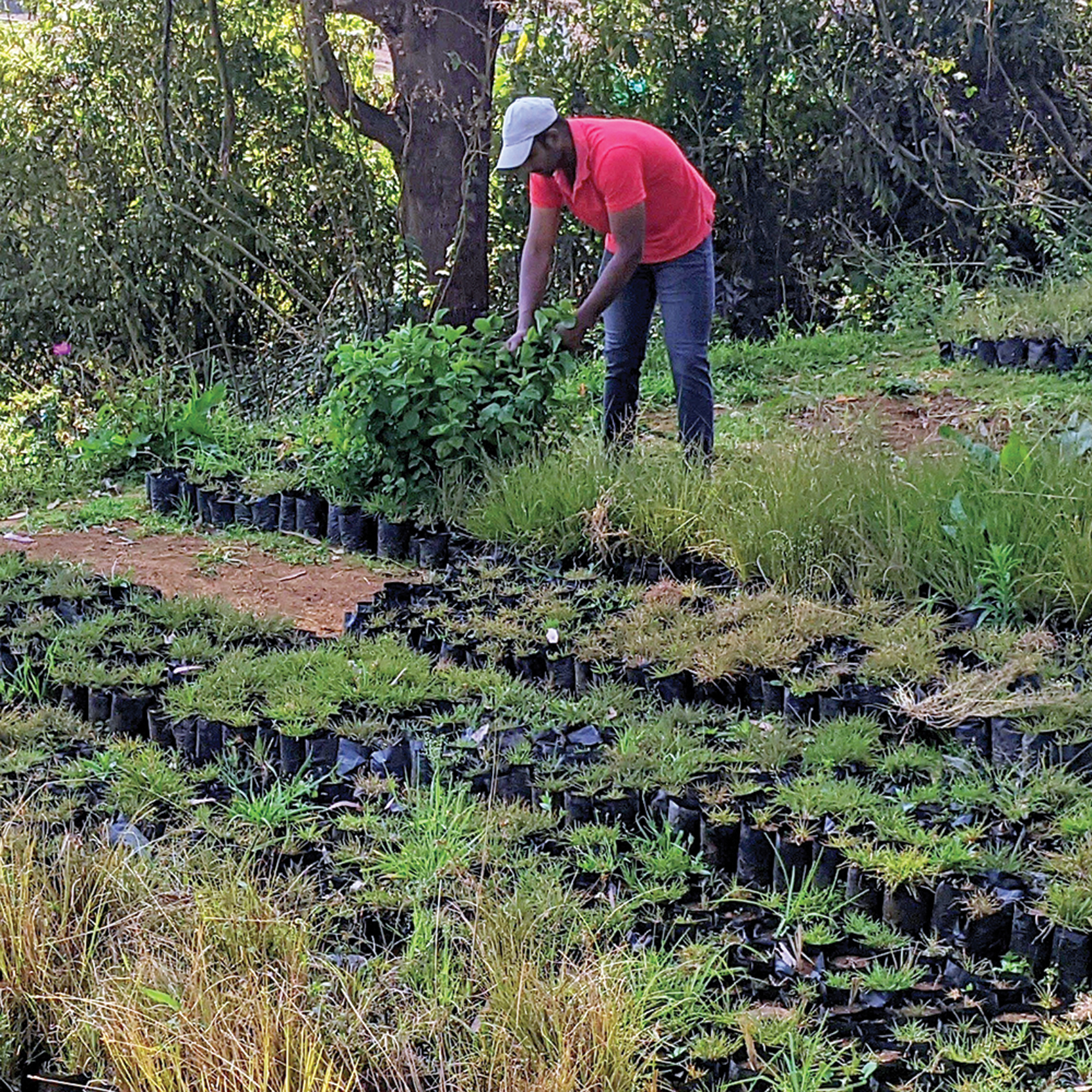 The author at work, at the native plant nursery he set up eight years ago, to nurture grassland and shrub species and to propogate diverse endangered shola trees. Photo: Pankaj Singh.

Unity Is The Best Strategy

Working with others committed to the protection of the Nilgiri biosphere – the local forest departments, indigenous communities, NGOs, educational institutions, local farming communities and private landholders – I focus on improving the ecological security of the landscape. Until now, there are over 300-500 acres of land that I have been involved in restoring across the plateau, which are in various stages of completion. I have also been promoting a concept of conservation gardens that showcase the aesthetic value of native species, along with their other countless benefits. This has allowed individual landholders to rewild their spaces instead of maintaining conventional gardens filled with non-native species. Through this work, the first populations of native tussock grasses have taken root in parts of the Nilgiris where once the grassland ecology had been lost. 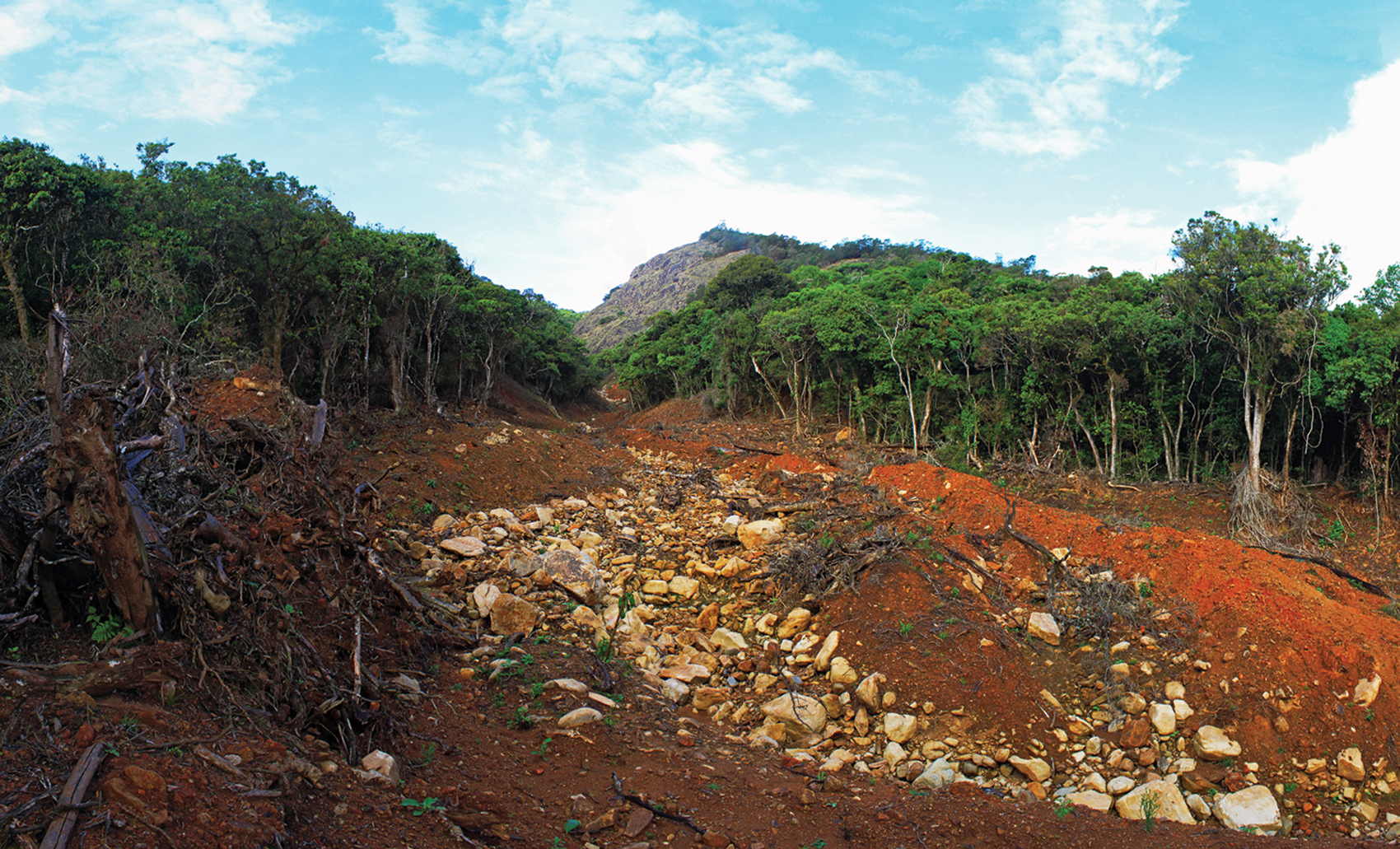 Massive landslides washed away thousands of shola trees, and grassland habitats, during the extreme rainfall event in 2019 in the Nilgiris. Climate-change related disasters including massive landslides, the hand maidens of extreme rainfall events, are adding to the challenges of a landscape that has already suffered under human-caused degradation and destruction. Less than nine per cent of healthy and pristine ecosystems remain in the Nilgiris. Photo: Godwin Vasanth Bosco.

Getting To The Root Of It

Each restoration project begins with a baseline survey of the soil, landscape, topography, weather and water conditions. To identify whether the space was previously grassland or shola, I study the micro-habitat. The types of plants used for rewilding differ if the chosen site is a stream, a wetland or a rocky area. Compositions of shola forests differ according to location and elevation in the plateau. Since this landscape has several invasive exotics, over the years I have developed a set of native tussock grasses and shrubs that can establish a first layer of native plant cover and withstand the pressures of invasion.

Shrubs form an important part of ecological restoration and rewilding efforts. They establish quicker than trees, and have important roles in maintaining the health of the entire ecosystem. For instance, there are several forest kurinjis such as Strobilanthes cuspidata and Strobilanthes papillosus, which are naturally attuned to grow in a tight skirting, where they are planted. In natural settings, these shrubs form a tight seal around shola forests, helping them maintain a suitable micro-climate that starkly differs from the grassland outside. I work along with this adaptation to help provide shade and shelter while trying to bring back shola forest trees in restoration patches.

I am also working with several native shrubs and herbs to understand their phytochemical potential in offering economically viable solutions for plantation and agricultural spaces. In fact, close to 60 per cent of the plateau is now covered in tea plantations (an intensive monocrop) and vegetable farming (chemical intensive). In our pharmacological lab, we conduct research on several species to come up with alternative regenerative solutions. 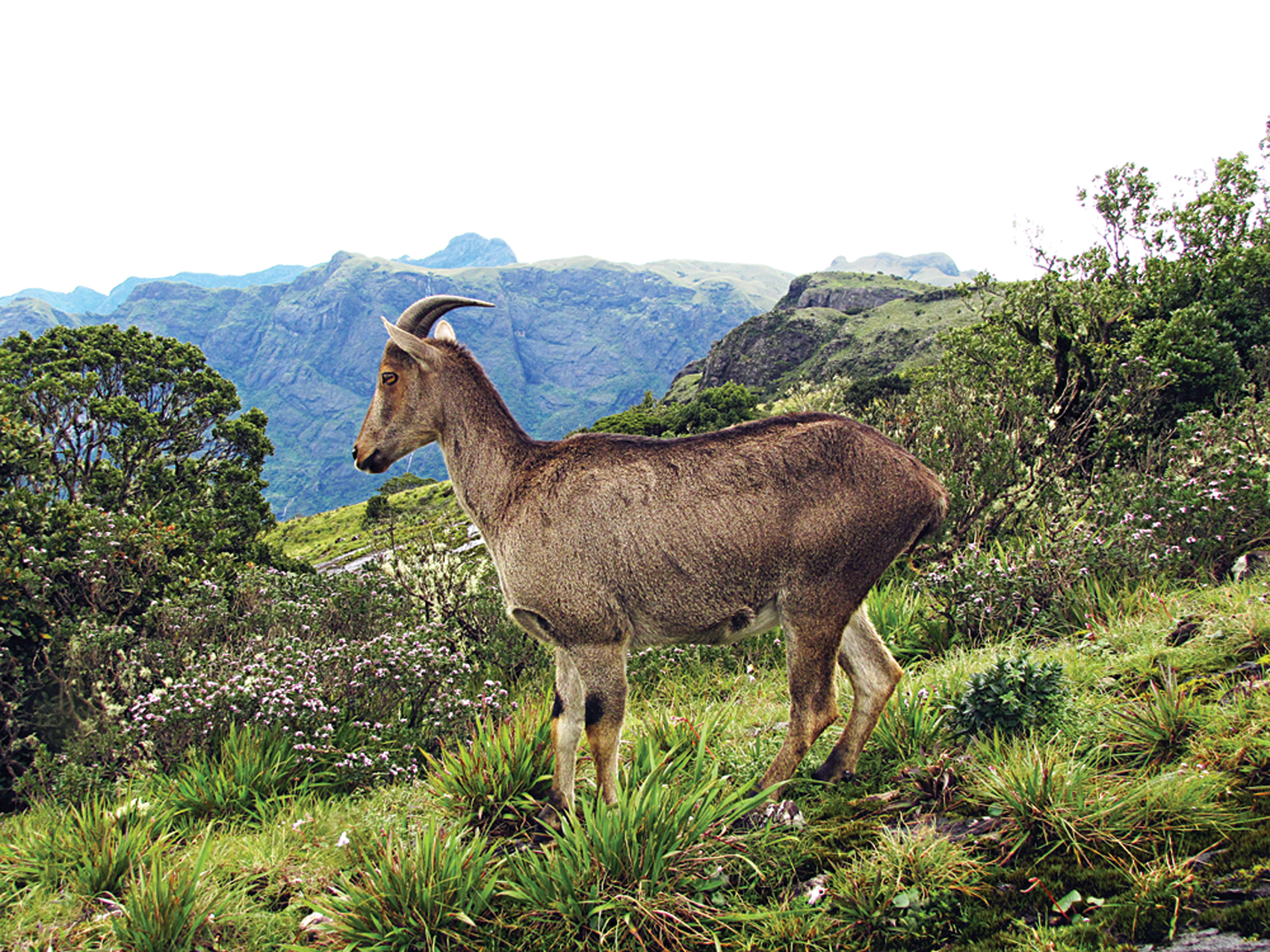 A female Nilgiri tahr amidst her preferred food of native tussock grass Zenkeria elegans. This grass often grows next to rocks and rock faces in montane grasslands, and is highly endangered. The author has helped restore native grasslands across several acres in different sites in the Nilgiris. Photo: Godwin Vasanth Bosco.

Grassland ecology is highly endangered, because the ecosystem has been reduced to slivers along the edges of the plateau. They play a vital role in supporting life and shaping the landscape. The deep root networks of these tussock grasses, and the shrubs that grow exclusively in grasslands – such as the kurinji species – all help build rich layers of soil and hold them firmly intact on slopes. Studies also show that tussock grasses, which can live for over 600-1,000 years, can sequester surprisingly large amounts of carbon in the soil. In fact, studies suggest that grassland and shrubland restoration are key to climate resilience and are actually more reliable carbon sinks than forests, because all the carbon storage happens below the ground surface. It is vital that we protect and restore our grassland and shrubland habitats.

In addition to working on local solutions within the landscape, the author is also trying to communicate the fact that this landscape holds key solutions for larger global crises. Within the colossal story of this ancient mountain, he says, exist secrets about nature so far unexplored by science. With nine years of interdisciplinary research on various aspects of this region, he has found scientific evidence that the land (at a geological scale) is alive and intelligent. Dominant human civilisations are based on the destructive utilisation of lands. With this set of evidence, which is illustrated in the author’s book Voice of a Sentient Highland, he hopes to remedy humanity’s fundamental disconnect with nature.

Godwin Vasanth Bosco is a restoration ecologiist and an interdisciplinary researcher-author based in the Nilgiris, India. He is also a singer and songwriter who composes songs about nature.