The recently-appointed Union Minister for Environment and Forests Veerappa Moily is on a project-clearing spree, which many believe is an attempt to get corporate India on the UPA’s side before the general elections in 2014. The EIA Resource and Response Centre (ERC) was set up to prevent the misuse of such power, which pushes destructive development projects, toxic chemical use, and the usurpation of natural resources belonging to communities.

In 2007 ERC was a division of the Legal Initiative for Forest and Environment (LIFE). The idea was to keep watch over and challenge falsified EIA reports that facilitated the destruction of India’s flora, fauna and communities by people seeking profit or popularity

Ritwick Dutta, the Supreme Court lawyer who founded ERC says: “The number of projects cleared by Minister Moily in such a short span of time is shocking. It is clear that he has not applied his mind before approving these projects and their validity is bound to be challenged. It is crucial to understand that these are not just files to be cleared off a table, but are issues concerning the survival of wildlife and the livelihoods of communities.” 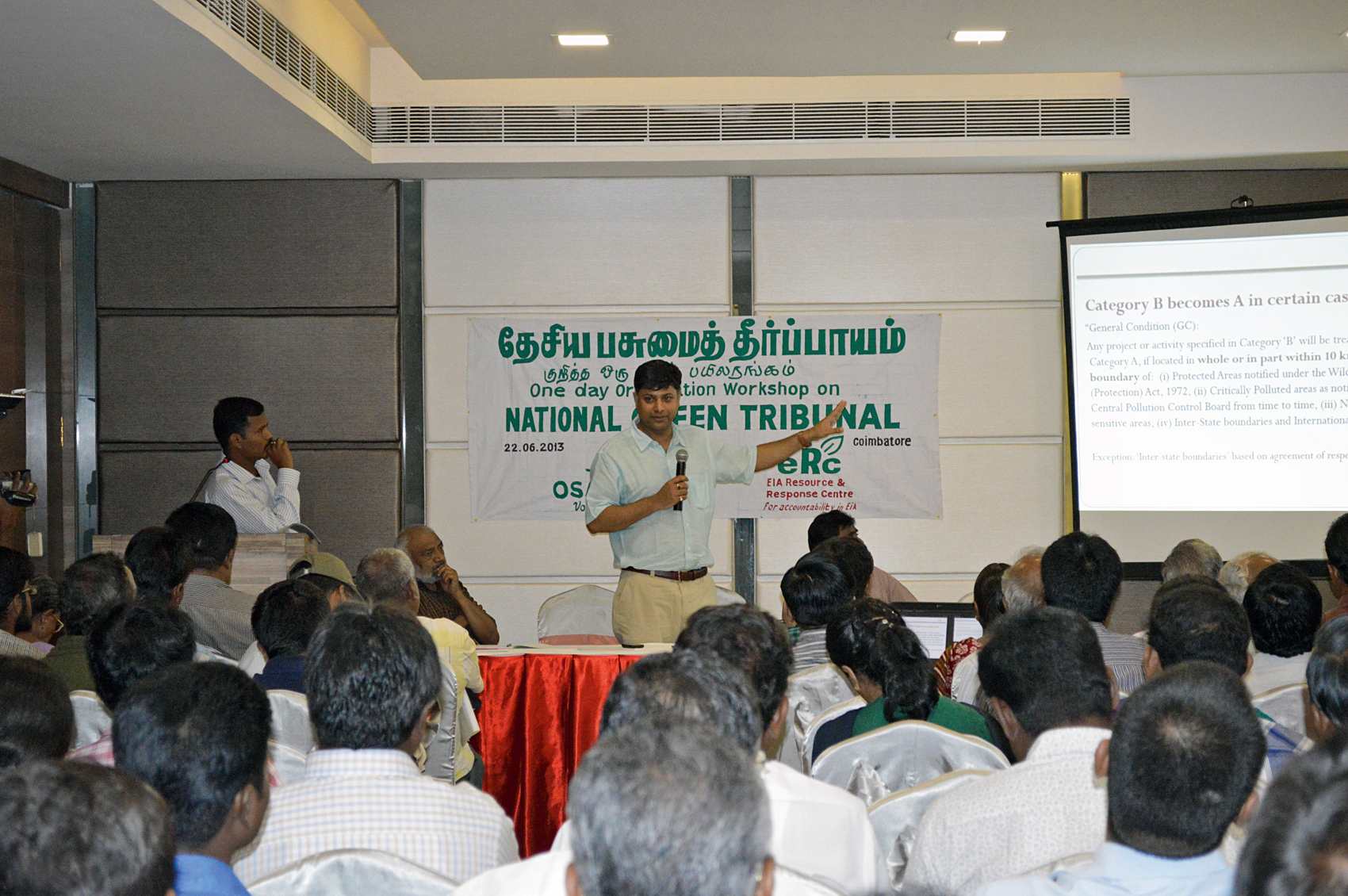 A. Pragatheesh (left) and Ritwick Dutta during a presentation on the EIA Notification, 2006, in Coimbatore.

ERC was the outcome of an Innovation Award received by Dutta from the Ruffords Foundation. Focused almost exclusively on EIA-related issues, ERC operates out of New Delhi, with two field units in Goa and the Nilgiris respectively, but its impact is pan-India. Over the past seven years, ERC has helped empower communities to more effectively participate in the EIA process through strategic interventions, particularly related to forest clearance processes. ERC also helps train NGOs and activists on EIA basics, forest clearance processes and the powers and functions of the National Green Tribunal.

Continuous research and analysis of EIA and forest clearance files enabled ERC to demonstrate in 2011 that the actual rate of rejection for projects under the clearance-authority of the then Union Minister for Environment and Forests, Jairam Ramesh, was just one per cent (the same as that of his predecessor). This blew the whistle on the loud claims that the MoEF had become a roadblock for investments in India. Then in 2013, ERC proved that the Forest Survey of India’s reports that claimed an increase in forest cover had been falsified and window-dressed. As against the claim of increased forest cover, India had really lost an astounding 333 acres of forest land – all legally diverted by the MoEF – every single day.

The news media and the environmental grapevine picked up these facts and today the courts are no longer forced to blindly accept the fiction trotted out by pliable officials under orders from political satraps. ERC today serves as an exchange and a platform for lawyers and scientists to apply their skills to challenge unprincipled approvals by creating a body of experts whose inputs can put a brake on runaway, anti-national destruction, disguised as development.

The ERC also intervenes when it observes the Expert Appraisal Committees (EAC) and Forest Advisory Committees (FAC) being arm-twisted into recommending approvals for large-scale projects. Demanding greater transparency and accountability, Dutta says: “In our experience, these committees very often approve projects as a matter of routine without applying sufficient thought. Our team keeps an extremely close watch of their functioning and provides scientific support to communities to challenge cases where faulty approvals have been given.”

A number of organisations within India and across its borders work closely with ERC. These include the Environics Trust, the Keystone Foundation and Samata in India, and the Environmental Law Alliance Worldwide. ERC’s scientific critiques on EIA reports are also made available to the National Green Tribunal to take informed decisions.

Sanctuary Asia readers who wish to benefit from ERC’s considered opinions and their ability to take on even the most powerful in the land should check out their website: http://www.ercindia.org.