By the Wildlife Conservation Trust

Small protection huts, or anti-poaching camps (APCs), dot tiger reserves across India. Forest guards, forest watchers, special tiger protection squad members and occasionally, senior staff may all use these camps, but the focus here are forest guards, the ‘lowest’ in the rung, but along with the watchers, the first line of defence for wildlife and the ecosystems that support our wilds.

Often a uniform renders the wearer invisible. We overlook the intelligent and sensitive human inside. These are people that the Wildlife Conservation Trust (WCT) wishes to acknowledge. Environment and nature conservation appear low down in the list of priorities of Central and State governments, consequently these sectors are given short shrift and forest guards, more so.

WCT has worked for the well-being of forest guards for years. Initially, we focused largely on improving work conditions by donating necessities (winter gear, vehicles, water purifiers, digital cameras, walkie-talkies, GPS, etc.), conducting health check-ups, trauma management training, and law enforcement and forensics training. It soon became clear that the mental health of the staff and their well-being determined their motivation and was therefore critical to the effective protection of our natural heritage. 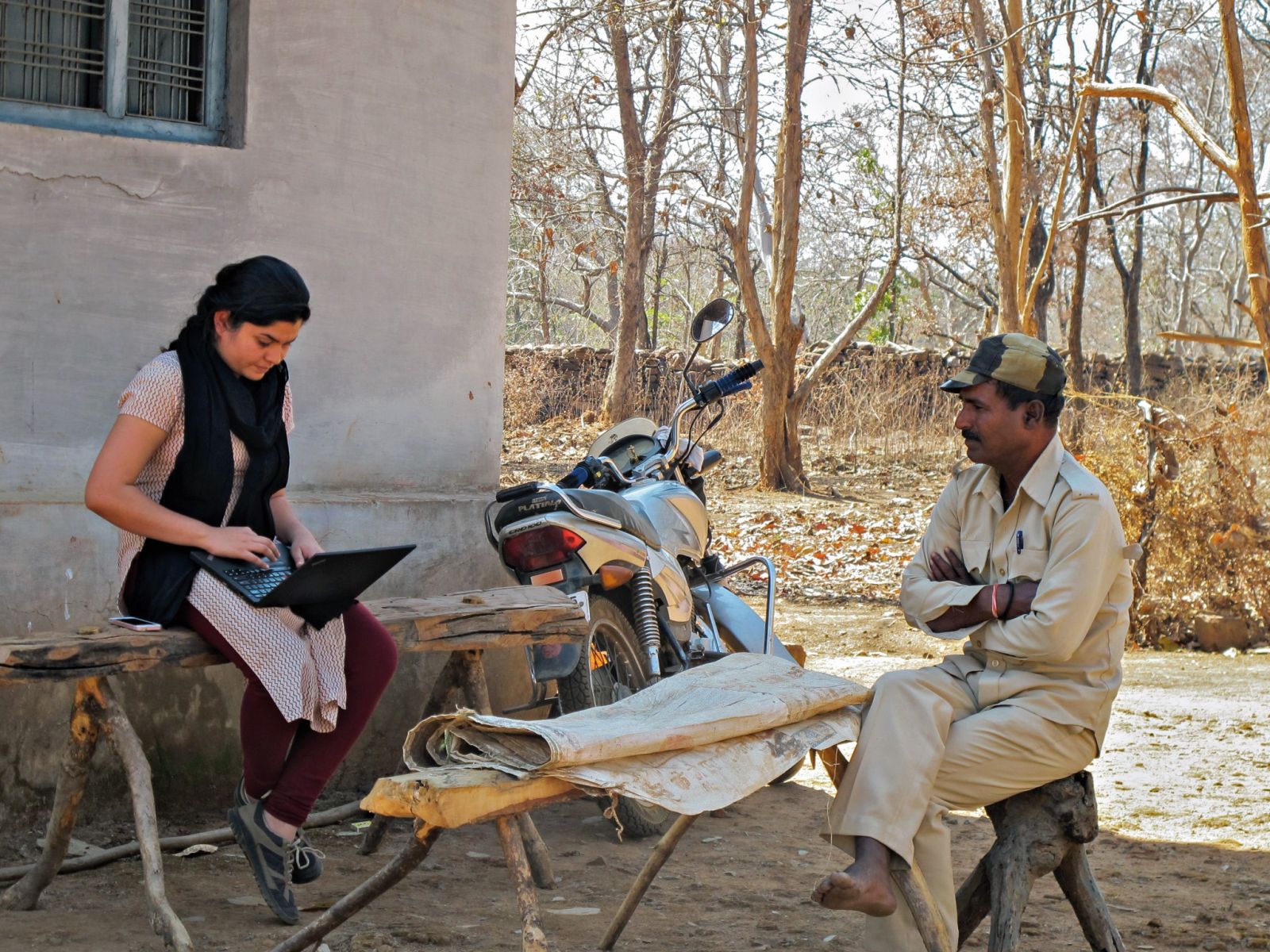 Conservation psychologist Prachi Paranjpye interviews a forest guard in the Panna Tiger Reserve. Conducting such interviews in a familiar environment is vital to creating the right atmosphere for them to express themselves. Photo courtesy: Wildlife Conservation Trust.

To deal with the myriad pressures intricate management interventions are required, including human-wildlife interface management, water and soil conservation measures, fire control, and a whole lot more in-between. Much of the onus for implementing these objectives falls on forest guards, whose jobs are challenging… both physically and psychologically

All employees need a conducive working environment with tangible benefits, to foster psychological well-being. Productivity and efficacy are directly proportional to good working conditions, as affirmed by extensive psychological and social studies. India has far to go in this regard, but investment of time and resources would greatly improve their work and living conditions and this would result in better forest protection and law enforcement.

A paper, authored by social scientists Deci E.L. and Ryan R.M. in 2014, on the importance of universal psychological needs for motivation in workplaces, argues that:

“…Human beings have deeply evolved psychological needs to be competent, autonomous, and related to others, such that, in contexts, where these needs are satisfied, people evidence more volitional, high-quality motivation and greater well-being, and when these psychological needs are thwarted, people display various forms of diminished motivation and more symptoms of ill-being.”

In the past, there have been surveys and studies conducted on forest rangers and workers in Asia, and specifically India, but few focussed on the psychological, motivational and work performance of these critical women and men. WCT’s social scientists have set out to address this gap by assessing the motivation levels of forest guards in the tiger reserves of Maharashtra and Madhya Pradesh.

The survey has been designed by psychologists, including Dr. Vivek Belhekar, Professor, Dept. of Applied Psychology, University of Mumbai; Aniket Bhatkhande, Conservation Economist, WCT; and Rushikesh Chavan, Head, Conservation Behaviour, WCT. We expect this initiative to deliver vital data that would help State Forest Departments to more sensitively engage with and enhance the working conditions in which forest guards operate.

Prachi Paranjpye, leader of the study is possibly one of India’s first professional conservation psychologists and is part of WCT’s Conservation Behaviour team. In her words: “We have data from roughly 40 per cent of forest guards in every range, in 11 tiger reserves and one wildlife sanctuary across Madhya Pradesh and Maharashtra. Each forest guard is guaranteed confidentiality, critical to putting them at ease.”
About 440 forest guards have been interviewed thus far. We now look forward to working with the Forest Department to translate the findings into meaningful policy-level interventions. 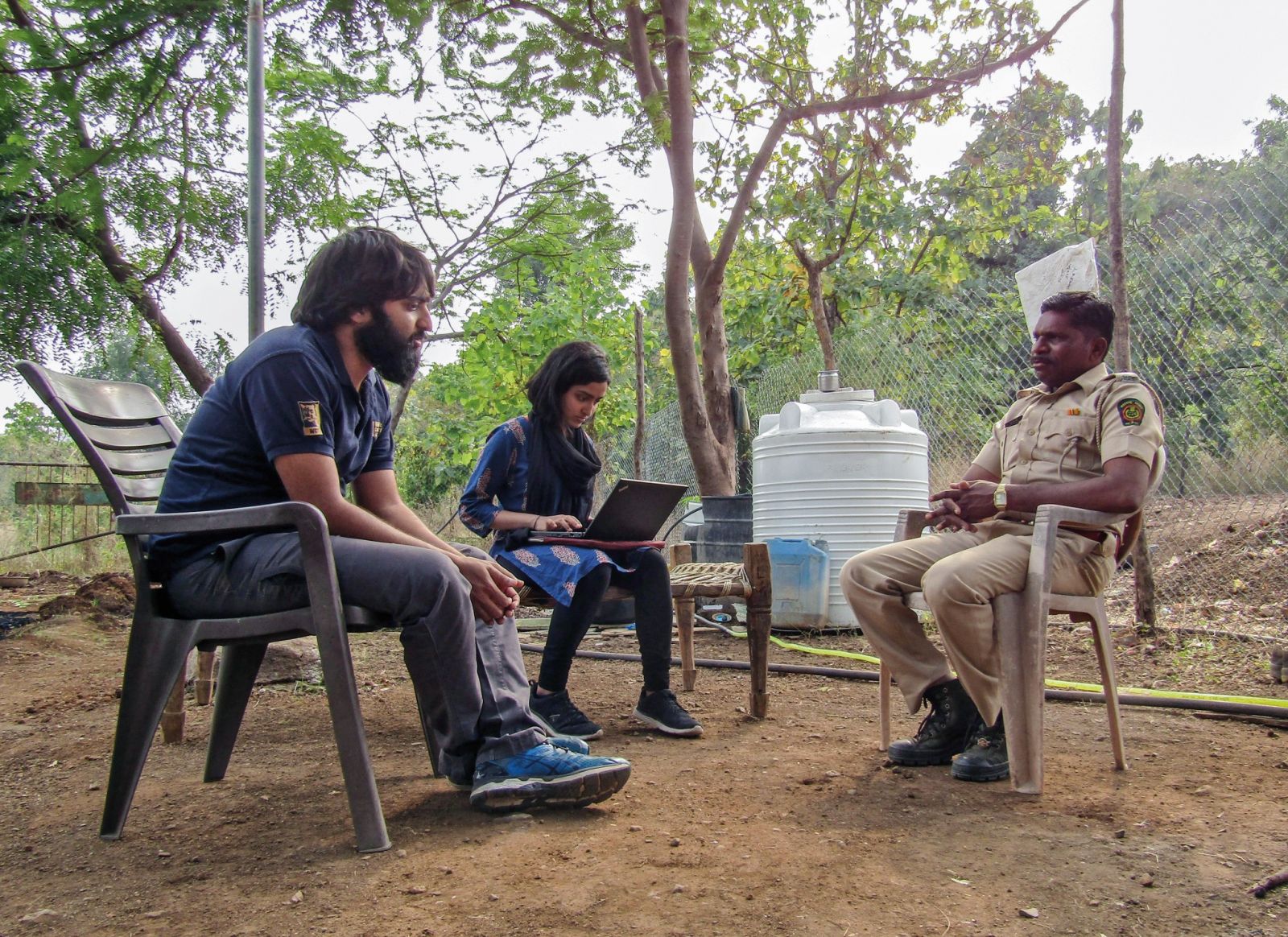 About 440 forest guards from 11 tiger reserves and one wildlife sanctuary across Madhya Pradesh and Maharashtra were interviewed by the Wildlife Conservation Trust (WCT). Specific policy and management recommendations were identified; if implemented, these will help to improve forest guards’ lives and in turn positively enhance their work. Photo courtesy: Wildlife Conservation Trust.

Heart of the Problem

Our findings feature in two detailed reports. In Madhya Pradesh, the degree of factors, namely, ‘work satisfaction and well-being’, and ‘association with work’ among the field staff, varied from one tiger reserve to the other. If Kanha and Bandhavgarh were high on ‘association with work’, they were comparatively low on ‘work satisfaction and wellbeing’. Vice-versa for Satpura, Pench and Sanjay-Dubri Tiger Reserves. While the former two risked increased instances of burn-out, the latter three underscored performance issues among field staff. In Maharashtra, three factors stood out – ‘sense of achievement’, ‘work conditions’ and ‘perception of policy’. One not very surprising finding revealed that forest guards feared for their safety, which hampered motivation.

While some expressed appreciation for working in forests they cared about, others expressed angst at working in isolation away from family, with low pay and a lack of family welfare policies. Some shared qualms about the lack of communication and feedback from superiors. In their moments of vulnerability, we were granted a glimpse into their apprehensions. One thing was clear – though the present study is focused on assessing work motivation levels, a deeper intervention to prioritise psychological health of field staff is vital.

Based on our data analysis, WCT has crafted specific policy and management recommendations for Maharashtra and Madhya Pradesh. These include improving the conditions of Protection Huts (or Anti-poaching Camps); instilling a sense of achievement; organising human resource management training sessions for senior forest officials; safety training for forest guards; setting up medical and counselling facilities. And, offering specifically-designed financial incentives. Each suggestion is accompanied by clear instructions for policymakers and if implemented sensitively (not an easy task) the outcomes would be nothing short of revolutionary.

Rushikesh Chavan says: “Nothing works in isolation. Being sensitive to and enhancing the motivation level of field staff will improve both efficacy and efficiency through appropriate interventions. The effort has been well received by the Maharashtra and Madhya Pradesh Forest Departments. But we still have a long way to go.” Adding that such change must stem as much from bottom up as top down and human resource management needs to be internalised as a part and parcel of the Forest Department’s ethos.

WCT’s conservation psychology interventions hope to positively impact such behavioural change in consultation with Chief Wildlife Wardens and Field Directors. Workshops are also being held for the Range Forest Officers (RFOs) and Assistant Conservators of Forests (ACFs). Ethical human resource management practices must percolate up and down the chain of command.

Dr. Anish Andheria, President, WCT, believes that the mission of the Forest Department is as vital as that of our armed forces and police. “Field staff risk their lives every single day, working in difficult terrains and braving a myriad hostile elements – ranging from unexpected attacks from surprised wild animals to water and vector-borne diseases. They must also deal with poachers, encroachers, smugglers, timber mafias and, in an age of advancing climatic extremes… forest fires that they must fight with inadequate resources and manpower.”

Yet, few people if any understand and appreciate their valour and dedication. No holidays. Away from families on even the most important personal occasions. Animosity from other villagers, even those who are neighbours. Few such brave hearts have possibly even heard of The Intergovernmental Panel on Biodiversity and Ecosystem Services (IPBES), yet they are the ones on the frontlines of preventing the next pandemic, sequestering and storing carbon and ensuring our food, water, air and economic security.

Meeting such people, shrouded in anonymity, is a humbling experience. But it’s simultaneously a lifting one. On a cool, misty morning, deep in the Melghat Tiger Reserve, we sat down with a forest guard and towards the end of our interview, visibly moved, he concluded: “This is the very first time anyone has shown any interest in understanding how we feel and what we go through every day of our lives. Normally, the only communications we hear are orders. This was different.”

In the line of duty
A look at a report by IndiaSpend indicates that India has seen more frontline forest staff deaths than any other country in the world between 2012 and 2017. Of the global figure of 526 ranger deaths, 162 (31 per cent) were recorded in India. The high-risk job of a forest guard demands extreme personal sacrifices. The report can be accessed here. The two study reports titled ‘Assessing the Work Motivation of Forest Guards’ for Madhya Pradesh and Maharashtra are available to read on www.wildlifeconservationtrust.org.
join the conversation