Journeys To The End Of The World

My Chinese colleagues and I scanned the jagged valley slopes for blue sheep while on a wildlife survey in the Datung Range on the Tibetan Plateau in March 2016. Liang Xuchang suddenly focused his binoculars on a round, furry head with frosty eyes peering at us over a boulder. Snow leopard! There were two of them feasting, we later discovered, on a five-year-old blue sheep ram. It was 8:10 a.m. and we watched each other for 35 minutes before the cats melted away. We were exhilarated at meeting these rare and elusive mountain ghosts, of which only a few thousand survive in a dozen Central Asian countries. Qinghai Province, where we were working, considers the snow leopard a symbol of its mountain realm. Its presence signifies ecological health, offering pure water and much biological diversity.  Here, as the sixteenth century hermit Milarepa said, “is a place where the snow leopards dance."

As a feral naturalist, I seek little-known species in remote places to explore the secrets of their lives and to help protect them. And Im especially drawn to the grandeur and solitude of mountains, their totemic space and silence filling me with delight. Thus the Himalaya and adjoining ranges naturally drew me inexorably into their heights. Having read the travel accounts of explorers and hunters from the late 1800s onward, I wanted to learn more about the animals that inhabit these rugged lands, much more: their current status and distribution, their social life and food habits, and other details of their lives, including answers to scientific puzzles. Is the blue sheep, in spite of its name, a sheep or goat? The chiru or Tibetan antelope looks indeed like an antelope. But is it? In brief, behaviour and DNA show that both are most closely related to ancestral goats. Luckily my affiliation with what is now the Wildlife Conservation Society enabled me to follow my dreams. 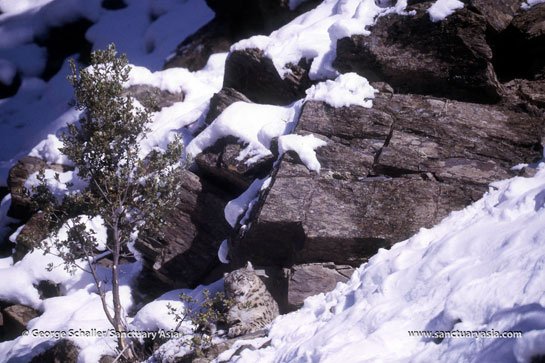 I made my first venture into the Himalaya in the late 1960s to study the hangul or Kashmir stag. Then, invited by wildlife enthusiast Reggie Davidar in South India, I also observed the behaviour of the Nilgiri tahr. To study blue sheep or bharal, I trekked across the Himalaya to northern Nepal in 1973 with Peter Mattiessen, the author of The Snow Leopard. My spirits soared when in 1984 Nepal declared the Shey-Phoksumdo National Park partly as a result of our research. To continue the pattern of my life, my wife Kay and two young sons moved to Pakistan for two years in the early 1970s so I could study mountain ungulates, such as urial, ibex, and Sind wild goat in the Hindu Kush, Karakoram, and other ranges. One of my quests was the Kashmir markhor, its males elegant with their spiraling horns and long white ruff.

Once on a bitter December day, while searching for markhor among snow-bounds crags, I spotted a snow leopard at rest on a spur. She had a kill, a domestic goat, and in a nearby rock cleft was her cub. I fetched my sleeping bag from camp and crawled into it on the slope just below her.  Bold and curious she returned to her meal. Darkness soon engulfed us, but I could still hear her, tooth grating on bone.  It snowed heavily that night, soaking my bedding. The romance of fieldwork and physical discomfort were perfectly integrated, and I felt privileged that the snow leopard tolerated my presence. Like all large mountain predators, including wolf, bear, and lynx, they are shot, poisoned, and trapped in retaliation for killing livestock. Though often a predator kills livestock because it is easily available and left unguarded or when poachers have decimated its natural prey. Conservation of wildlife ultimately depends on close cooperation with local communities. That is a difficult task, as I learned when my research began in China in 1980 and where it continues still. 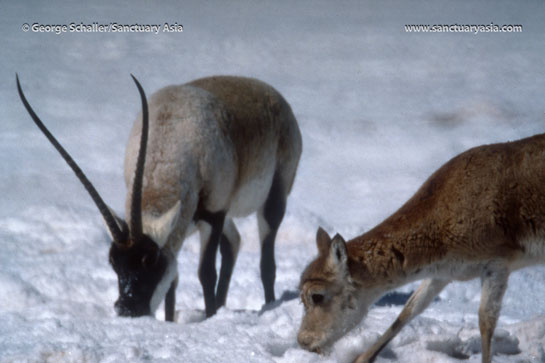 The huge Tibetan Plateau, most of which lies at an elevation of 14,000 feet (4,300 m.) or more, has a unique large-mammal community.  It includes the kiang or Tibetan wild ass, Tibetan gazelle, wild yak, and chiru. These are uncommon in Ladakh but still widespread on the China side of the Tibetan Plateau.  However, all are threatened by poachers.  Perhaps only 15,000 wild yaks remain. They are heavily hunted for their meat and hides, and their wild integrity is threatened by hybridization with domestic yaks.

In October 1985, a rare blizzard covered the uplands with a foot or more of snow. Chiru herds plowed knee-deep through the desolate landscape in search of forage.  Thousands died of starvation, as did other wild and domestic animals.  I examined many of the frozen chiru bodies; most were females and young. Temperatures at night dropped to an uncomfortable minus 400. The survivors vanished into the white void.  Where did they go?  No one could tell me.

I then spent years following the migrating chiru herds across hundreds of miles into the unknown where not even pastoralists venture because grass is too sparse for their livestock.  All I knew is that after moving north in May and June the chiru reappeared with their newborns in autumn. We found five more or less distinct migratory populations, each with a communal calving area.  No small reserve could protect them as they flowed by the thousands across hills and valleys.  In an extraordinary initiative, China established the Chang Tang Nature Reserve in 1993, covering a landscape of about 115,000 square miles (300,000 sq. km.) of the Chang Tang, as the ‘northern plain in Tibet is called.  This reserve is larger than the United Kingdom! 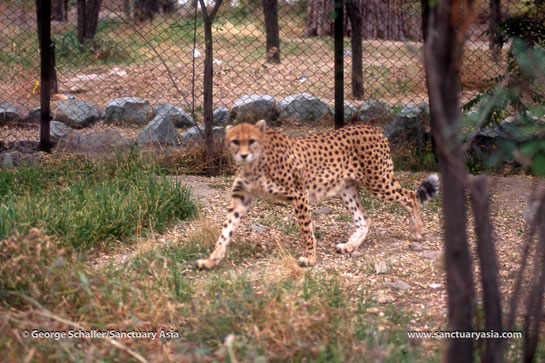 Now an urgent conservation issue supplanted any scientific work. Chiru are unfortunate in having the finest wool in the world. Weavers in India have produced ultra-fine shahtoosh shawls from this wool for centuries. In fact, Mughal emperor Jahangir in the early 1600s wrote caringly about the ‘Tus shawl.  Starting in the late 1980s, a mass-slaughter began on the Tibetan plateau for the valuable wool, females were even greedily butchered on the calving grounds as they gave birth.  The wool was then smuggled to Srinagar in Kashmir, often via Nepal, to be woven into exotic shawls for the wealthy.  I calculated that as many as 300,000 chiru were massacred for profit during the 1990s.  Many of us, including Belinda Wright of the Wildlife Protection Society of India, publicized the plight of the chiru and tried to ban the trade.  By the end of that decade only in Kashmir and Switzerland was the shahtoosh trade still legal.  The situation has improved, however, illegal wool still reaches Srinagar and illegal shawls continue to be exported, particularly to Dubai and other Gulf states. (For details of this carnage see my book Tibet Wild published in 2012 by Island Press).

New and complex conservation issues constantly confront any naturalist, as the chiru story illustrates.  He or she may have to continue for years to resolve such a problem.  If you turn your back, the natural treasure for which you have fought may be destroyed.  I continue, for example, to collaborate with Iran to help with the survival of the very last few dozen Asiatic cheetahs in the desert mountains and plains of the country.  These lovely cats are now extinct elsewhere, including India where once they were quite common.  I have also made many journeys to Mongolia to study snow leopards, as well as the great herds of Mongolian gazelles.  And in the Pamir mountains live the Marco Polo sheep, the grandest of all sheep with rams having great curling horns as long as 75 inches (190 cm). As early as 1273, Marco Polo had noted these ‘wild sheep of great size. I have surveyed their numbers in China, Pakistan, Afghanistan, and Tajikistan since the 1980s. Because these sheep wander back and forth across international borders, I have promoted the establishment of a four-country trans-frontier reserve or peace park of about 20,000 square miles (51,800 sq. km.).  This would help in the protection and management of the Marco Polo sheep, promote the livelihood of the local Khirghiz and Wakhi peoples, and maintain the ecological integrity of the land. Three of these countries have established protected areas and agreed to cooperate in their management.  Tajikistan remains a holdout, and Marco Polo sheep remain on the menu in restaurants here. 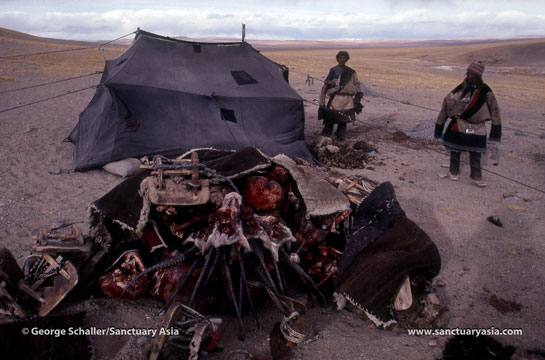 After nearly half a century devoted to Asias mountains, I know that these are part of my spiritual geography.  The beauty and harshness of the mountain landscapes have infused me, and I must return to them again and again to continue my quest to help all living beings, including the local people, endure.  We all need to be devoted to nature.  Everyone.  So, as an Afghan would say: Barakat. Lets go!

The author is an American mammalogist, biologist, conservationist and author. Dr. Schaller is recognized by many as the worlds pre-eminent field biologist, studying wildlife throughout Africa, Asia and South America.

George Of The Jungle!