My association with the late Ambika Prasad Khare began in 2010 when I was the Field Director of the Panna Tiger Reserve (PTR). I joined PTR in May 2009, when the tiger reserve had been declared ‘empty’ of tigers. My job was to assess the issues that plagued the reserve. There were many of course, but an important concern was that the Protected Area (PA) did not have the support of the local community. This was a sad statement, but not surprising given that few locals had even had a chance to visit and appreciate the tiger reserve. I realised that without the support of the community, the future of Panna would always be questionable.

To bridge this gap, I conceived the idea of organising nature camps for locals. I requested Sanjay Thakur, a Pune-based naturalist, to help me tailor such a programme for Panna. I also roped in WWF-India as a partner to strengthen the credibility of the programme and was well supported by Ravi Singh, Secretary-General, WWF-India.

I first met Ambika Khare when he was selected along with his student Devidutta Chaturvedi after a stringent screening process to run the Panna Nature Camps. I worked with Ambika Sir and Devidutta during all the camps organised in 2010-2011 and continued to meet them frequently. From the second year, all sessions were fully booked as soon as the camp dates were announced! Ambika Sir soon became one of the most important pillars of the Panna Nature Camps, which ran successfully for almost a decade before the COVID-19 pandemic brought them to a halt in 2020 (we did manage to organise three virtual camps). To date, 236 camps have been conducted, with 7,220 participants. The duo’s success in running the programme found recognition when they were bestowed the Sanctuary Green Teacher Award in 2016. 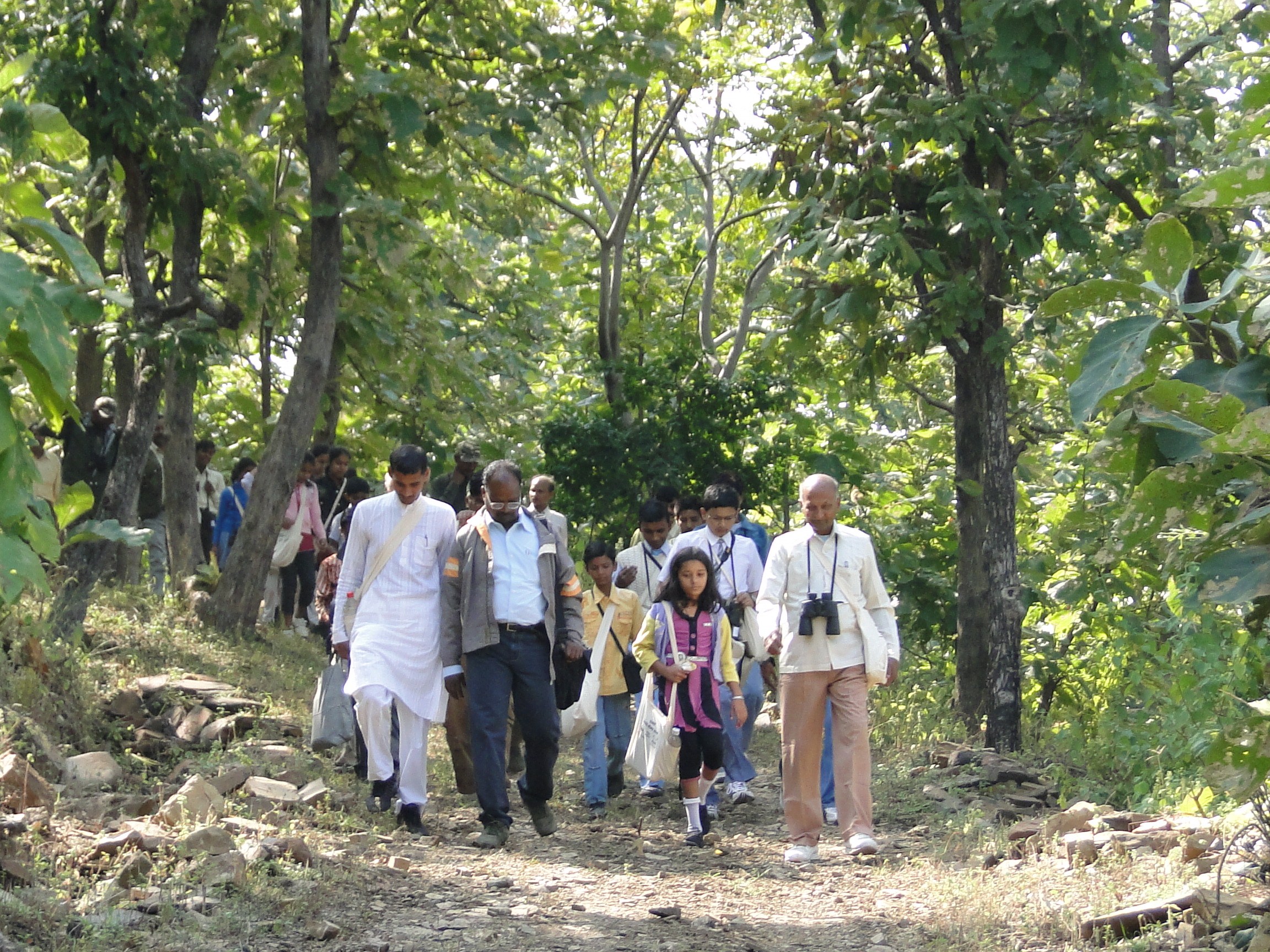 Ambika Sir was energetic and enthusiastic, despite being in his 80s. I often introduced him as the youngest member of the camp. Donning his signature white safari suit, white cap and shoes, he was a fixture at any event conducted by the Panna Tiger Reserve. In 2010, during Wildlife Week, we had organised a rally to win public support for the park. Ambika Sir quickly mobilised hundreds of kids from local schools and it became one of our most successful rallies. I fondly remember him sharing newspaper cuttings of the first-ever global tiger summit in 2010 held at St. Petersburg, Russia, when 13 tiger range countries endorsed a Global Tiger Recovery Programme. Ambika Sir said we were on the right track and that we were already working toward a tiger recovery in Panna. He would say that the Panna Nature Camps had extended his life by a decade, by encouraging him to become a nature-teacher. For me it was the reverse – having such a dedicated teacher as part of the Panna reconstruction process added so much to my strength.

Panna’s tiger numbers gradually improved and helped Madhya Pradesh regain her ‘Tiger State’ title in 2019. People like the late Ambika Prasad Khare and Devidutta Chaturvedi were key bridges connecting people with the park, and turning the Panna tiger reintroduction into a real “Jan Samarthan se Bagh Samrakshan” (Tiger Conservation with People’s Support) model. I hope this example will be emulated by all in the future, for there could be no better homage paid to this great soul. 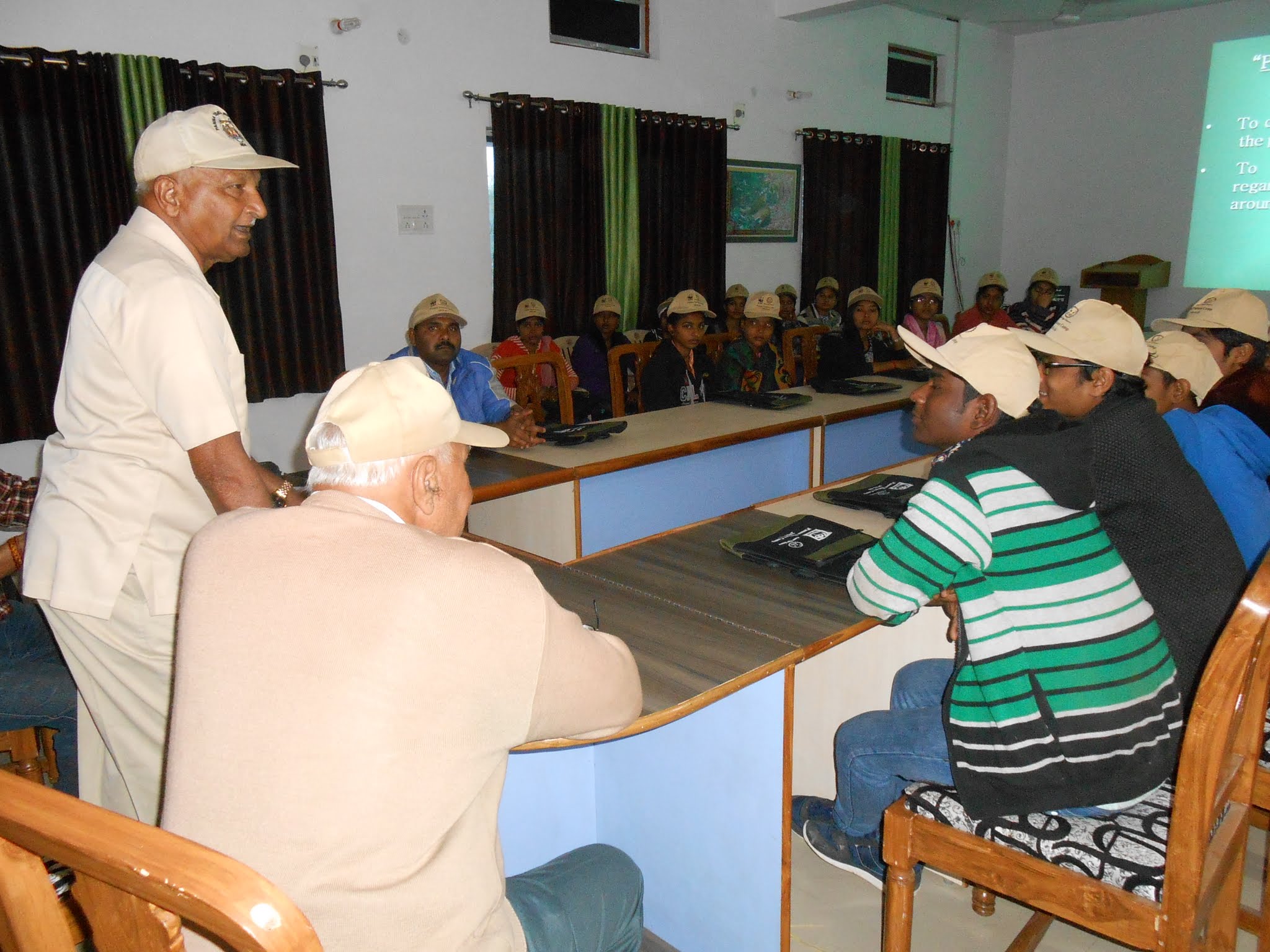 Ambika Khare and Devidutta Chaturvedi, a teacher-student duo, were awarded the Sanctuary Green Teacher Award in 2016. Together, these committed educators nurtured generations of young naturalists in Panna. Photo: Sanctuary Photolibrary.

Born in 1932, Ambika Khare’s schooling was completed in Panna before he left for Rewa for his intermediate education in 1953. He became an educator by 1954 and simultaneously graduated from the Sagar University with a B.A. in English Literature, and then a B.Ed. from the Regional College of Education, Bhopal. An amazing academic, he also completed his L.L.B. as a night student, and then L.L.M. as a private student. A follower of Aurobindo, he believed in yoga and lived a peaceful, ethical life, ably supported by his wife Sahodra and his children, Poorna and Ritam. After 31 years of service, he opted for voluntary retirement in 1985 to establish the Shri Aurobindo English Medium School in his own house in 1986. This turned into a Higher Secondary School in 2004. He greatly contributed to the education of Panna’s young. Many of his students continue to shine including Devidutta Chaturvedi, a Presidential Medallist.
join the conversation