Tucked between once-rolling meadows of grasslands and shola forests, is the scenic hill station of Kodaikanal in Tamil Nadu. Quintessential problems of most hill stations in India are found here – rapid urbanisation, exotic species and commercial plantations, increasing human population, and unchecked tourism. But a nascent, homegrown organisation – shaped by a dedicated group comprising the town’s long-time, former, and part-time residents – offers a glimmer of hope for this part of the Western Ghats.

“There are many challenges to overcome in order to successfully and sustainably manage mountain biodiversity. The growing demand for water, the rapid increase in tourism, the consequences of climate change, all contribute to the degradation of the mountains,” says Lathika George, landscape designer and author of Mother Earth Sister Seed. Over the 35 years she has resided here, she has witnessed the landscape erode, the climate become more unpredictable, and conflict with wildlife more prominent. “We rarely saw bison [gaur] in town when we were young, but now it’s a common occurrence!” says Rajni George, Lathika’s daughter. A writer and editor working in climate change adaptation with a non-profit based in Thailand, Rajni returned to her hometown when the pandemic began in March 2020. “There are several wonderful organisations, which have done and are doing great work here, like the Palani Hills Conservation Council (PHCC), the United Citizens Council Kodaikanal (UCCK), Rotary Kodaikanal and others, but the conversations around action are spread out,” she says. 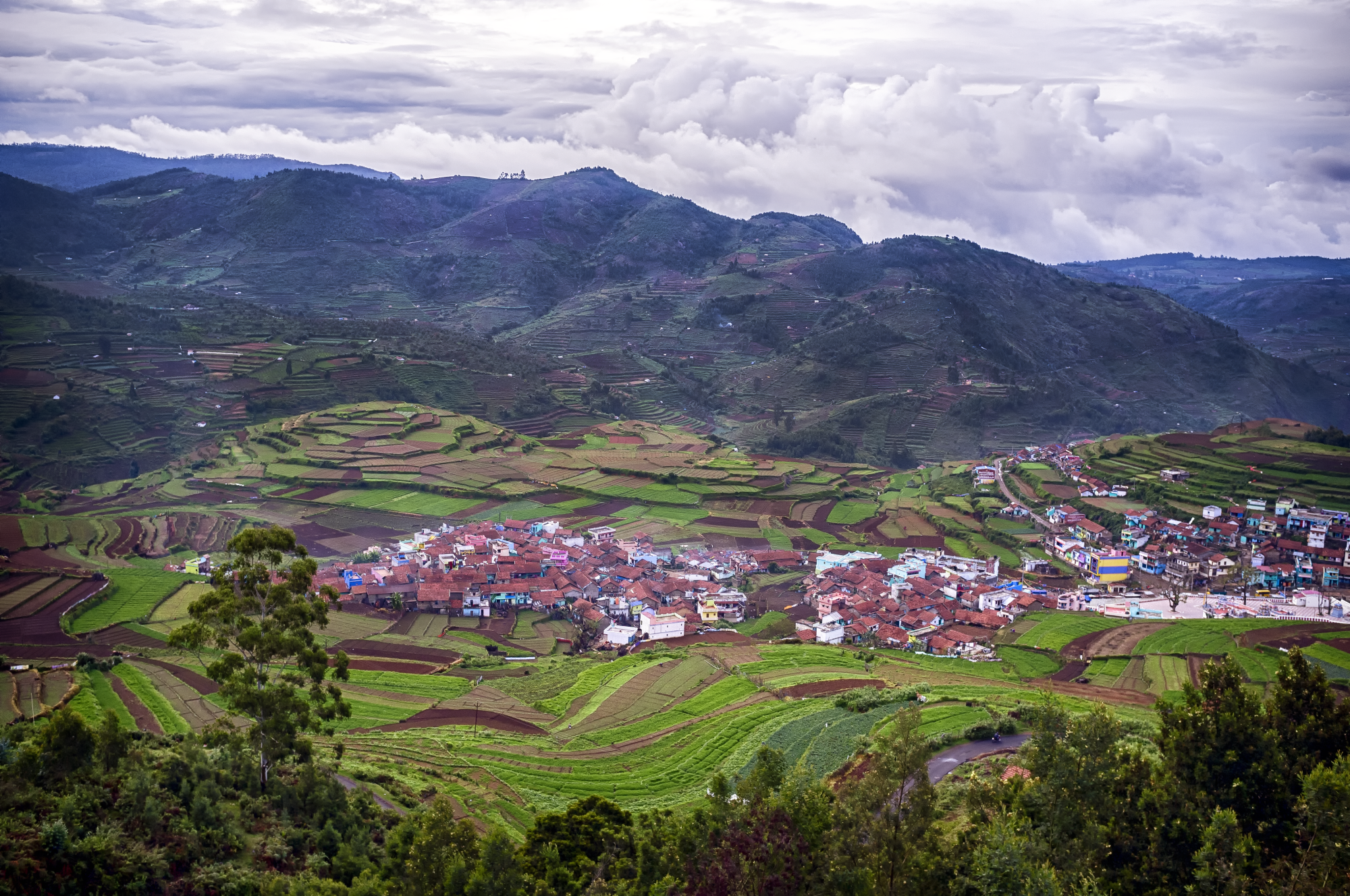 Rajni George has 15 years of experience in publishing, development and journalism at organizations such as Penguin Random House, The Caravan, Granta, and the United Nations Development Program. Over several conversations with like-minded folk during the onset of the second wave of COVID-19 last year, she set out to help launch a publication for the town – its first source of news and a space for reflection. The Kodai Chronicle’s first issue rolled out in June 2021, online. As Founding Editor, Rajni wrote in the Editorial, “Through storms, cyclones, poor connectivity, and lockdowns, as well as the demands of social distancing, around 50 of us planned, shaped and contributed to this pilot issue, Zoom meeting after meeting, dropped call after dropped call, in and around Kodaikanal – and, across the world…. Together, old, new, and former Kodaiites wrote in and volunteered time, expertise, and contributions, in classic Kodai fashion – through networks of trust, love and camaraderie.”

Given the diversity of people involved, from young professionals in their 20s to retired senior citizens, and the scope for efficient action, running the publication under the aegis of a trust as opposed to a straightforward business seemed most fitting. The idea was to sustain the larger objective of environmental awareness and community action, to work towards long-term change; while operating a profitable publication, so as to ultimately offer a viable source of income in a small town dependent on tourism for revenue. 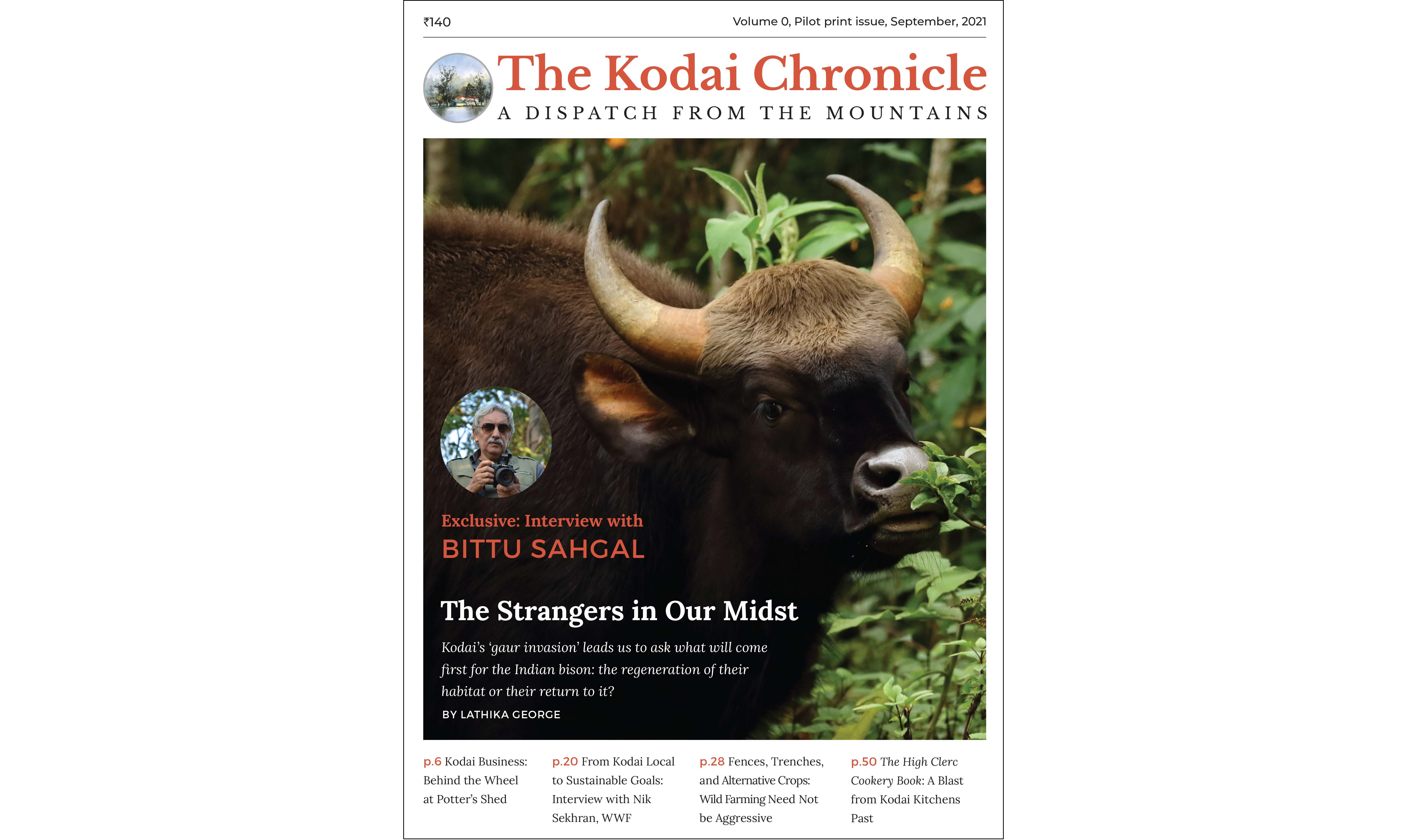 The Kodai Chronicle Trust was set up a month later in July 2021, with a board that includes Avijit Michael, cofounder and managing Trustee of Jhatkaa.org, and Lathika George. Policy analyst Radha Kumar, who helped set it up, ran the second edition of the Kodaikanal Gandhi Prize via the Trust, reaching students all over India.

While the trust sustains The Kodai Chronicle, it extends beyond the publication and is part of a campaign to help protect Kodai. Though it has been just over six months since they started, they have already succeeded in getting a dedicated group of local organisations and volunteers together for a waste management initiative to clean up Kodai and set up systems for long-term conservation in this region.

“Kodaikanal has a poorly managed waste management system, which needs to be modified. Even the segregated waste ends up in the community dump yard together. Also, the boundary wall of the dump yard had broken and the waste was seeping into the adjoining forests, thereby affecting wildlife and polluting the waterbodies that supply several towns in the plains,” says Lathika. The problem was extensively covered in the first issue of The Kodai Chronicle that was published last July.

The trust has been working on several initiatives to bring this issue to the attention of the local municipality. “We have been working at different levels; some on education and creating content for locals to understand segregation. I have been working more on the backend with the municipality and the commissioner in ensuring that there are changes happening with the landfill and waste management at the systemic level,” says Avijit Michael. A Sanitation Workers Welfare Programme was launched in November 2021, providing hygiene and safety gear for sanitation workers through a crowdfunding campaign by Jhatkaa.org. “We’ve also been discussing with the commissioner about installing the town’s first biogas plant to deal with biodegradable waste, and also set up a machinery for segregating the dry waste. The recyclable waste can be recycled, and whatever is left can be pressed into Refuse-Derived Fuel (RDF) for waste-to-energy plants. Segregation is key for this process,” he says. 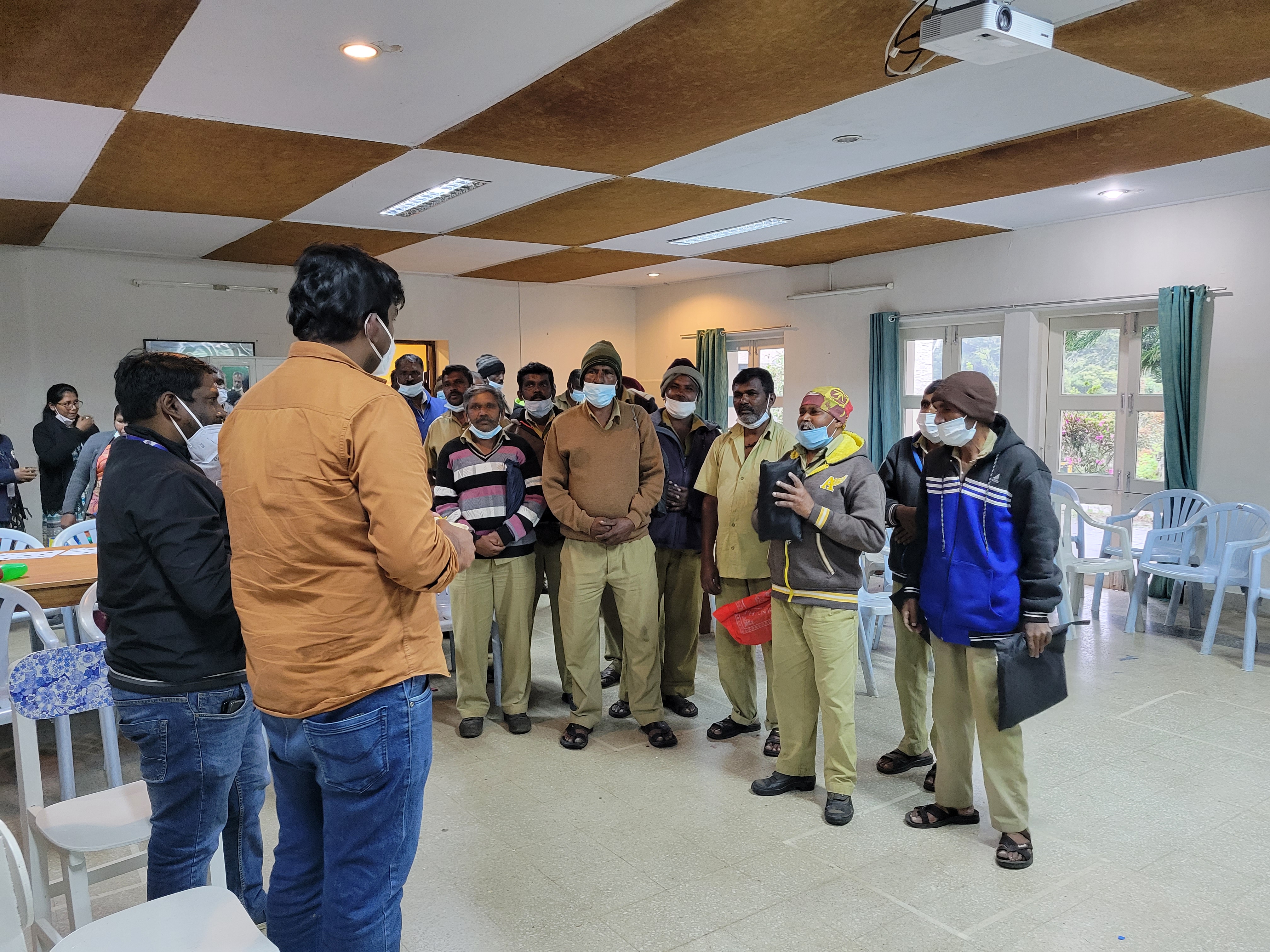 Kodaikanal has a poorly managed waste management system, and The Kodai Trust is focusing on addressing this vital issue. A Sanitation Workers Welfare Programme was launched in November 2021, providing hygiene and safety gear for sanitation workers through a crowdfunding campaign. Photo courtesy: KIS' Centre for Environment and Humanity.

Future plans for the trust include issues that concern the town: the infamous Hindustan Unilever Factory mercury leak, ecological restoration of the sholas and pesticide-free farming. Additionally, members are also looking into creating trekking maps that could guide tourists on non-invasive treks.

Though a small team, The Kodai Chronicle’s strength lies in the community that has poured their heart into establishing and running the trust. Made up of young writers and working professionals, all have a common aim: to improve and to protect Kodaikanal’s environs, including air, water, land and biodiversity. The Chronicle has a diverse editorial team. Jacob Cherian, director of sustainability-oriented communications agency TerreGeneration, is a member of TKC’s editorial board and its Environment Editor; Neha Sumitran, a writer and editor who practises regenerative farming and conducts workshops, is the Food Editor. Karuna Jenkins, a holistic educator and trustee of the educational off-grid community Sholai School, is Community Editor; and Nitin Padte, former journalist and educator, is Editorial Consultant. With contributors such as writer Zai Whitaker and photographer Ian Lockwood, plus waste management specialists, travellers, scientists, and adivasi writers reporting in Tamil, the monthly publication has had almost 100,000 website visitors across India and the world. 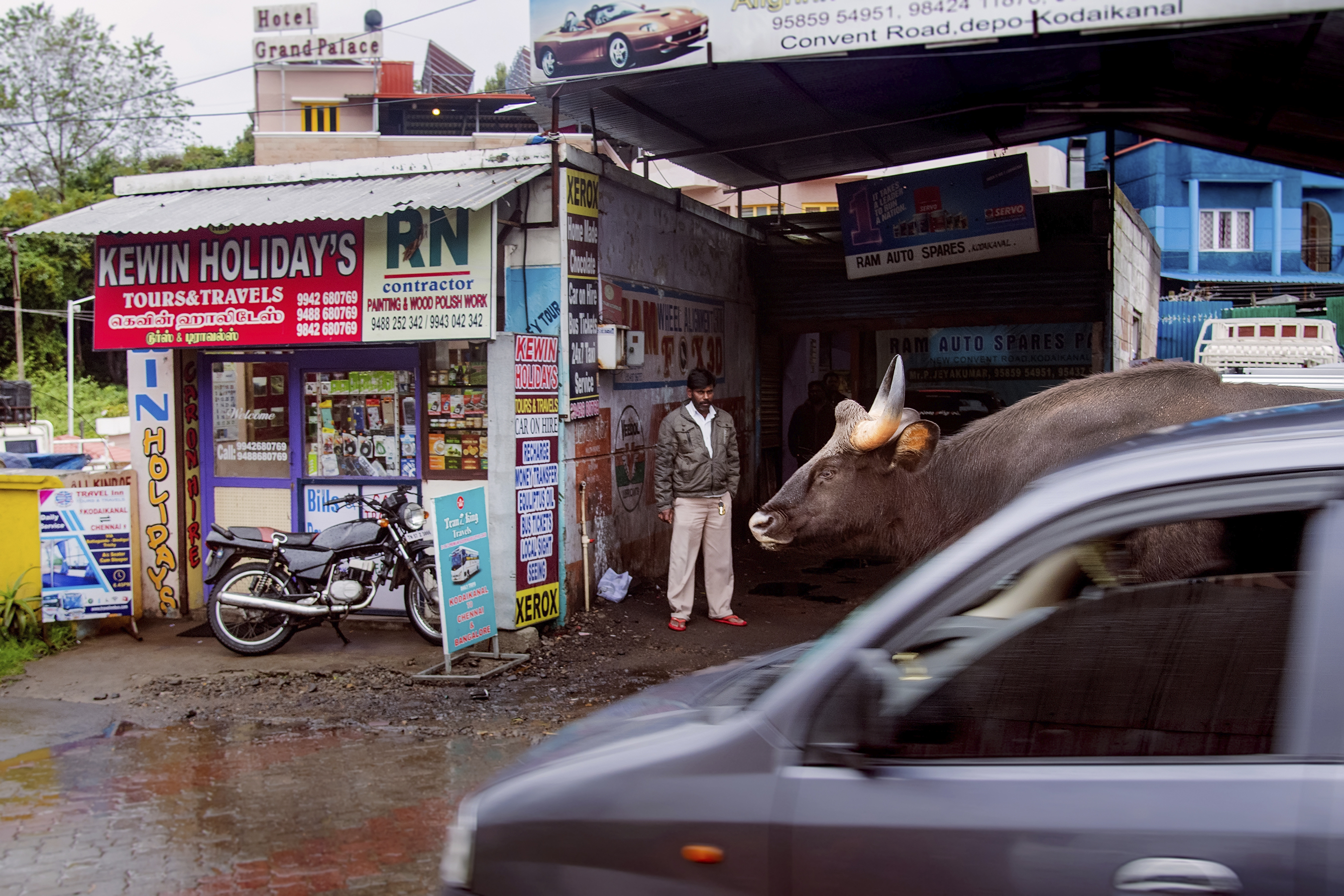 Kodai’s citizens are witnessing greater landscape degradation, more unpredictable climate patterns and more conflict with wildlife such as the Indian bison that is increasingly being pushed to human-occupied areas as its forest habitat is disappearing. Photo: Abhiroop Ghosh Dastidar.

“I think the mountains have to start connecting. From the Himalayas to the Western Ghats, we all have similar problems, and we must have the same goal: to protect our fragile ecosystems. As we share our stories, we’re going to find new solutions. What works in the mountains of Europe and America may not work here. But in connecting with other mountains in India, we are going to find ingenious ways to address these issues,” says Lathika.

“We are local – focussing on Kodai and nearby areas, the Palani Hills and the Western Ghats. And, far-reaching, in terms of the impact and appeal of our stories,” adds Rajni. “There are so many people here who are doing incredible work. It’s our generation’s turn to carry on the legacy of the conservation legends and civic-minded people who have helped conserve Kodai, thus far.”

Keep The Kodai Chronicle thriving by contributing to their fundraiser!