Chasing the Grey Ghost: A Man in the Wild

A year ago, my team and I were packing our bags to set out on what we hoped would be one of the best experiences of our lives. Our destination – Udaipur range, Lahaul, Himachal Pradesh. Little did we know that at that very moment, a forest guard named Shiv Kumar, was living the best experience of his life – he had spotted the elusive grey ghost of the mountains.

Shiv Kumar introduces himself as a senior forest guard in the Udaipur range of Lahaul Forest Division, but anyone who has had the opportunity to work with him would describe him as a passionate wildlife enthusiast. He joined the Himachal Pradesh Forest Department (HPFD) when he was 19 years old. Since then, he’s had 15 years of what he describes as “adventures and challenges". 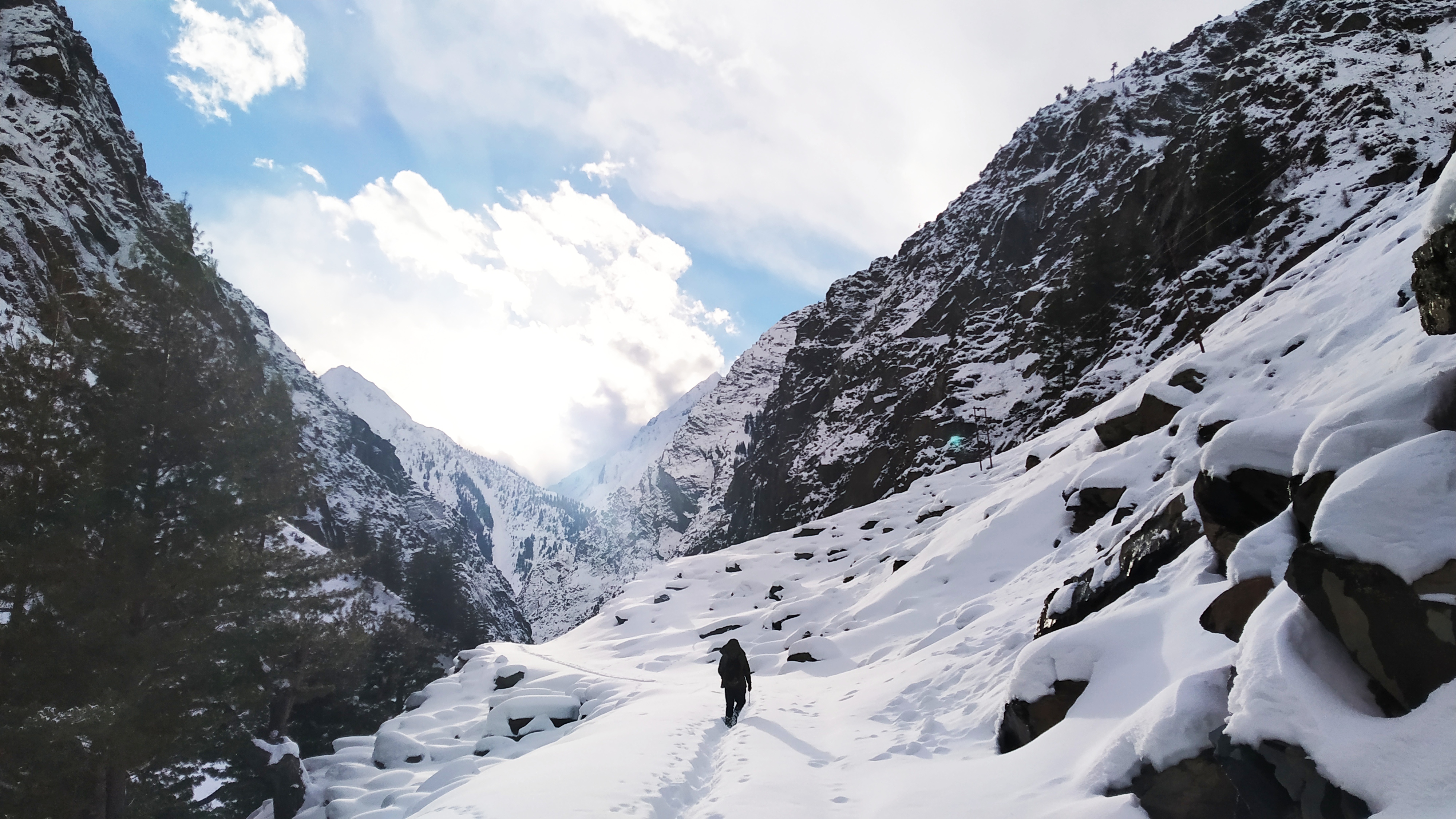 “People visit the Himalaya from so many parts of the country and the world, but we are fortunate enough to have been born here, so why waste any opportunity to explore and learn,” he asks.

Shiv is a talented wildlife photographer who has recorded around 160 birds from the region, and nearly every mammal too. “Identifying birds was a difficult task initially, but I have had the opportunity to work with some great scientists and researchers. I have learnt a lot from them, and books and Google have been quite helpful too,” he says. He is also the first person to document the snow leopard from his range in Udaipur. 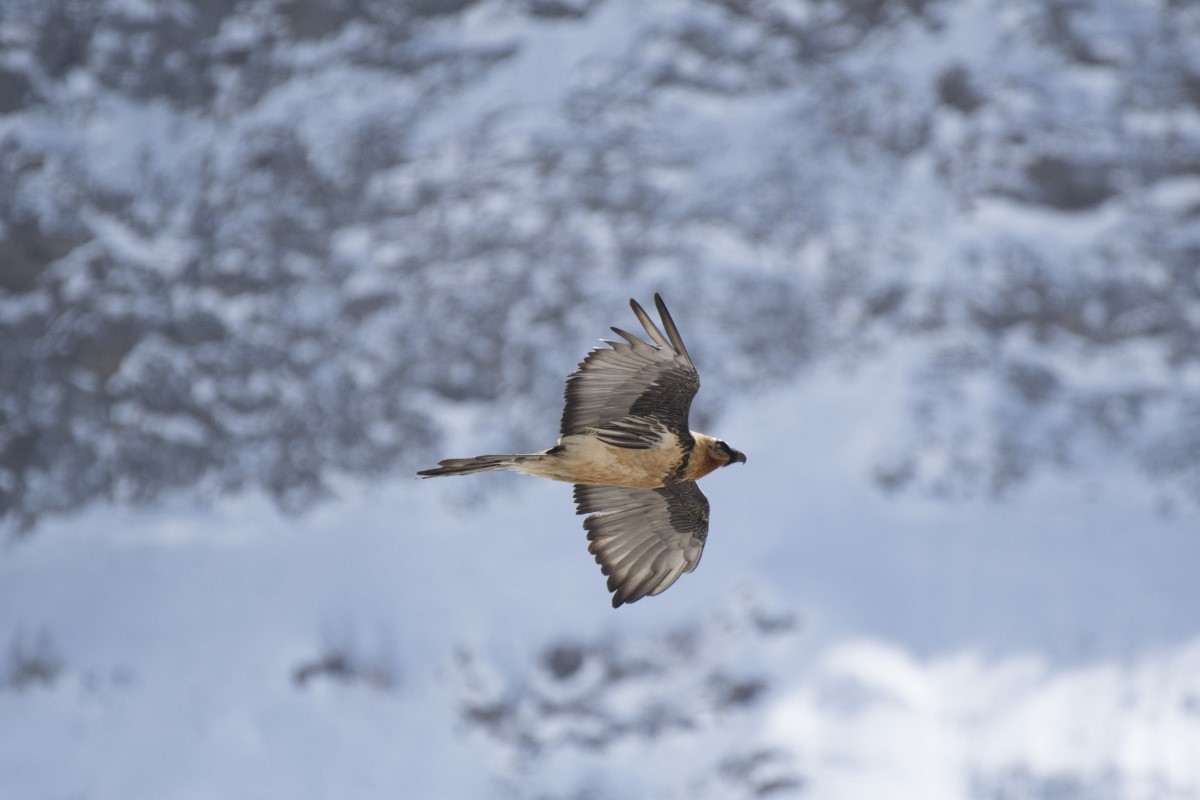 Bearded Vulture – a threatened bird species according to the IUCN –  photographed in the Keylong range of Lahaul Valley. Photo: Shiv Kumar.

“I had heard many stories about the snow leopard from locals and herders, most of which were conflict-related. In 2011, Dr. Kulbhushan Singh of the Nature Conservation Foundation posted a video of a snow leopard from Spiti valley. I decided then that I have to see this majestic creature, and if possible, in Lahaul itself,” says Shiv.

But spotting the rare and elusive species is not an easy task as it is a master of camouflage. In 2013, Shiv saw signs of the grey ghost -- pugmarks, scent, and scrapings -- but no direct sighting. Nevertheless, it was certainly a morale booster. A Facebook post about camera traps inspired him to try that method. “Our department didn’t have camera traps. I realised that if I want to pursue this ghost, camera trapping was the way to go. A Range Forest Officer (RFO) in Kaza, Devinder Singh Chauhan, lent me two very basic camera traps. In October 2016, I placed my first camera trap and the next year, in 2017, it captured my first photo of a snow leopard. It was a thrilling moment but I was not satisfied; I wanted a live sighting,” he says. 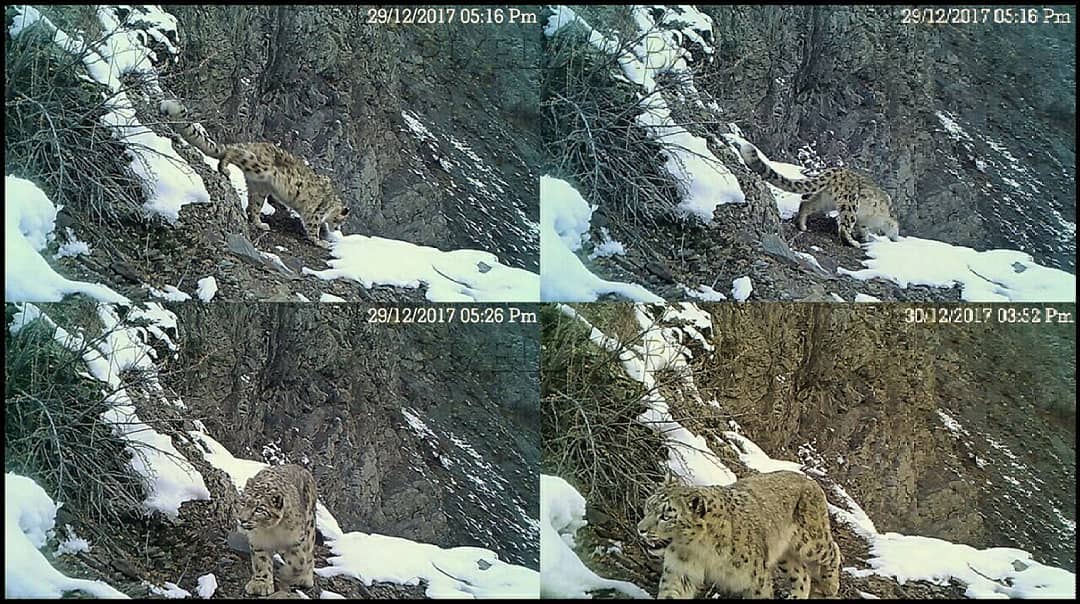 The first camera trap image of the snow leopard in Miyar valley, Lahaul valley, captured by Shiv Kumar in the winter of 2017. Photo: Shiv Kumar.

Over time, he collaborated with researchers for various projects. One such collaboration was with Dr. Trevor of the University of Chicago and Pratap Singh of the Wildlife Institute of India. “When they were leaving, they generously gave me three camera traps,” says Shiv. “With these, I managed to capture the same individual as earlier, but this time with a female. Placing camera traps in a landscape like Lahaul has its own challenges. Of the three camera traps I placed, I lost two – one was stolen by migratory herders and the other destroyed by shooting stones. In 2019, I purchased my own. It is motivating to know that this majestic species lives amidst us and that we are working to protect it.”

It took another two years of exhaustive camera trapping in various parts of the valley but his most cherished dream came true in 2019. He spotted a snow leopard in his range, in the Miyar valley.

“It was the usual dark winter evening. I was with a friend and the Miyar valley was covered with snow. We saw pugmarks and a trail as if something had been dragged upslope. At 5 a.m. the next day, I walked to the same location and went down the slope to find the blood and hair of a prey. I climbed upslope and followed the drag-markings, and there I found a kill. It was an Asiatic ibex. I was positive and hopeful that the snow leopard would come back for it. Luckily, I had a camera trap placed nearby. So, I climbed the glacier on the opposite side, retrieved that camera and placed it at a sufficient distance from the kill.”

“I returned that the evening with my friends Amir and Guru and a camera. We waited for a long time; it began to get dark. Disappointed, we were just about to call it a day when I quickly looked around for any sign of a snow leopard. And there it was…”

“It was looking straight into my camera, almost like it was on guard duty. It was magnificent. After that, the next direct sighting happened in Billing near Keylong. It has been an experience of a lifetime. Sadly, we also found a dead individual in the Pattan range.” 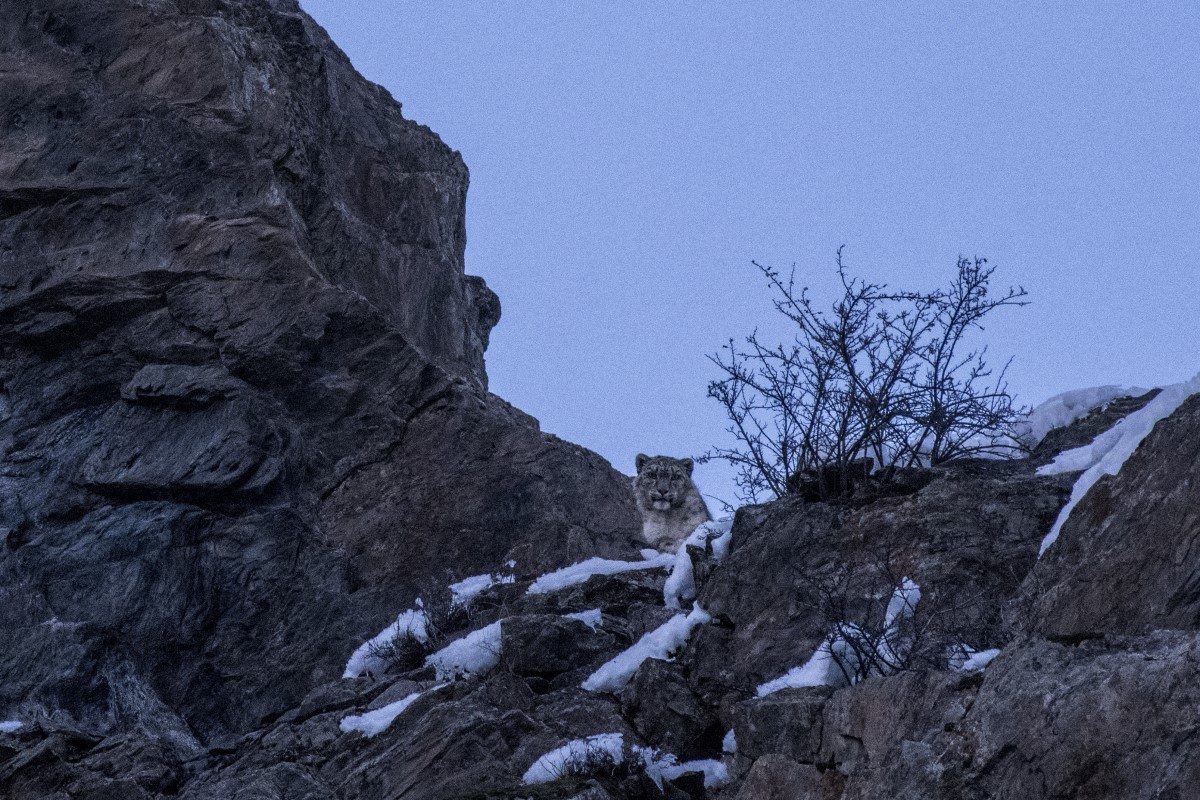 Shiv’s first direct sighting of a majestic snow leopard in the Miyar valley in the winter of 2019. Photo: Shiv Kumar.

Shiv Kumar’s drive is relentless. “There is a lot more that needs to be accomplished. I am hopeful because I am aware that I am not alone. Some senior officers from my Department like B.S. Rana, S.P. Dhiman and others have been very supportive throughout. I also have a team of wildlife enthusiasts in Lahaul valley. We share and discuss various issues with each other. It is a collective effort by the entire team and the community to protect the valley’s wild denizens.”

What does the future hold?

Throughout the years, Shiv has tried to engage more with the local community to spread awareness and involve them in his work with the Forest Department. In 2019, Shiv was nominated for the Sarvotam Vanya Jeev Mitra Puruskar, an initiative started by the Himachal Pradesh government to motivate forest officials. Shiv Kumar won the First prize under the ‘Wildlife Conservation’ category. 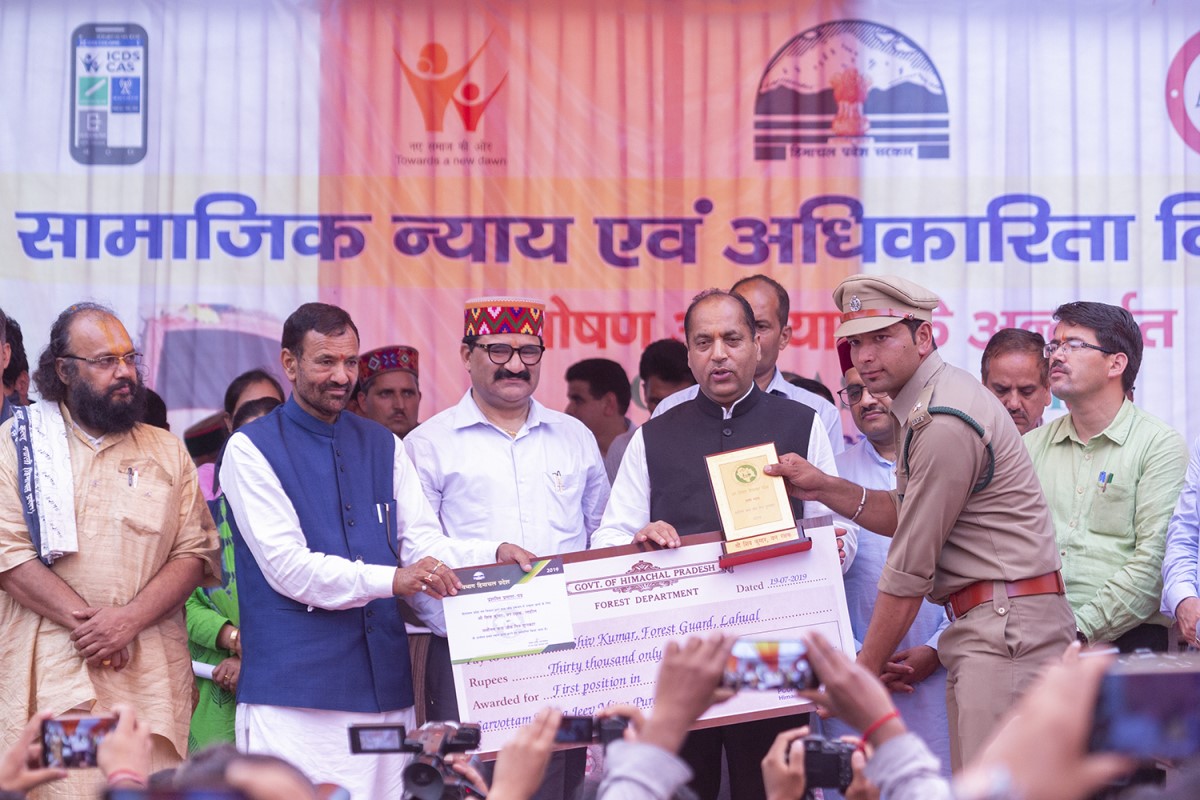 Shiv tries to attend as many conferences, meetings and workshops as possible including those conducted by UNDP in Delhi and Shimla, under the SECURE Himalaya project. “It gives me a chance to meet esteemed scientists and researchers. I can share information about my work and learn from them,” he says.

He is also a Project Leader of Sanctuary Nature Foundation’s booster programme, Mud on Boots. With the resources and funds received from this programme, he is able to go to local schools and interact with students to make them aware about the biodiversity that thrives in the valley around them. 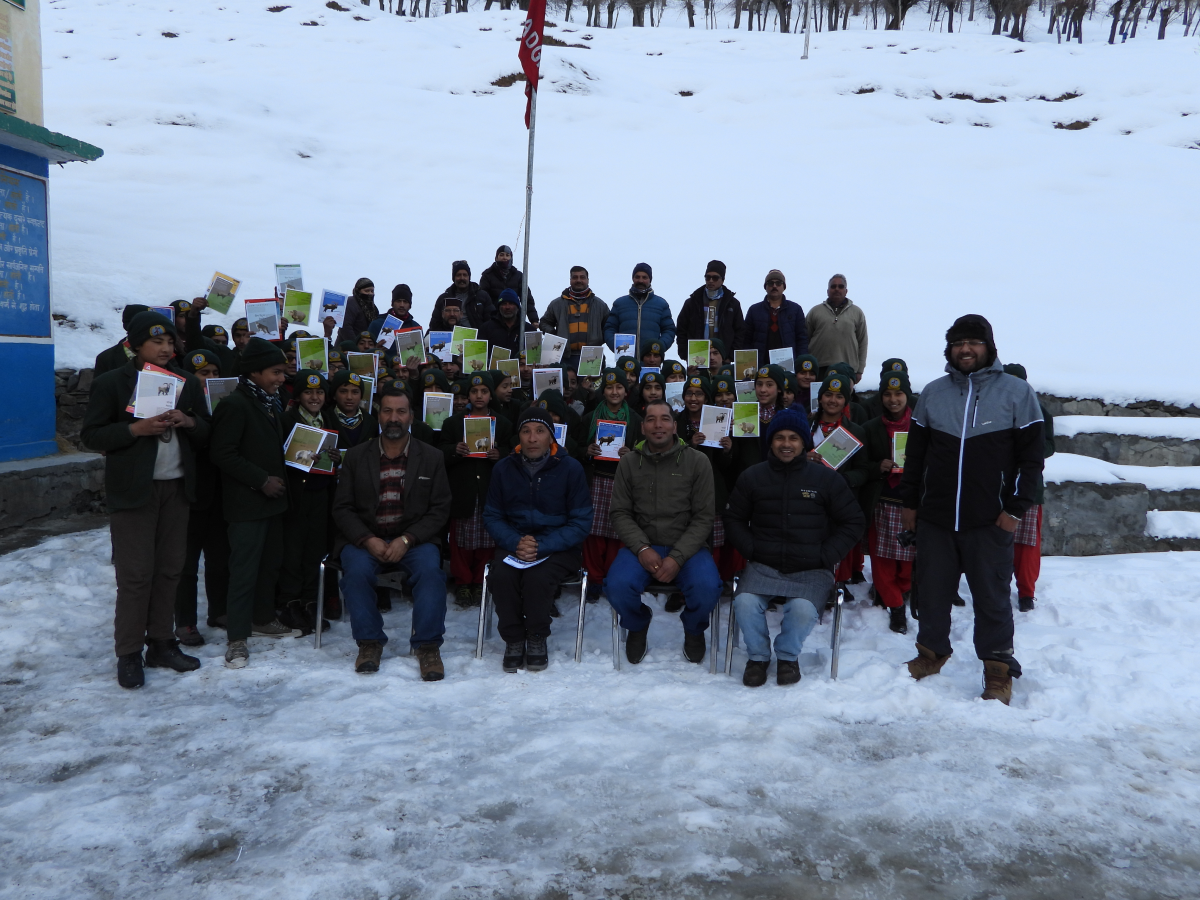 Wildlife awareness programme organised at a primary school in Madgram village of Udaipur range by Shiv Kumar and his team under ‘Mud on Boots’ project of the Sanctuary Nature Foundation. Photo: Team Wild Lahaul-Spiti

Besides his job as a senior forest guard, Shiv has currently taken up an independent study. He engages with migratory herders who suffer major losses due to bear and snow leopard attacks, which leads to negative attitudes toward the species. He makes them aware about their compensation rights, and motivates them to claim it in case of livestock loss. “I want to make sure that they know that help will be given by the Forest Department if they need it. The idea is to discourage a revenge-driven frenzy every time a bear or a snow leopard kills their livestock. I try not to scare or intimidate them but if they know that forest officials are out in the field keeping an eye on illegal activity (mostly, attacking wild animals), they would be careful. If we could convince these herders to collaborate and work with us, it would bring about some amazing changes on the conservation front. The herders have been in the pastures for many years and they know the landscape and paths really well. They could be the eyes of the Forest Department in areas where one can’t reach easily,” he says.

Shiv is also working to understand the tourism model of Spiti valley, and trying to replicate the same in Lahaul. “I went to Spiti earlier this year, mainly as a tourist. I wanted to see the rates and arrangements of safari and home-stays. If some of the ideas could be applied in the Miyar valley, it could generate good livelihood options. In fact, people have even contacted me directly to ask if I could take them for trekking and wildlife sightings. But being a forest guard, I have other commitments. I can’t become a tourist guide, but there are others in our valley who are capable. I also want to promote the idea of co-existence amongst our people as it would help with both livelihood opportunities and conservation of wildlife. I know I lean a bit towards the snow leopard but sighting any species of bird or an animal in the field is such a beautiful experience. Why would you not want to save it?” he says.

Author’s Note: I met Shiv Kumar during my research work as a part of the SECURE Himalaya project in the summer of 2019. Everyone, from forest guards to the Divisional Forest Officers in the four ranges of Lahaul, knows him and appreciates his work. Even the locals of the region talk about his love for wildlife, especially the snow leopard. He has worked with various institutions including the Wildlife Institute of India, Zoological Survey of India, Nature Conservation Foundation and several foreign researchers. He is calm, down-to-earth and always excited for new adventures. Shiv Kumar is an inspiration for many. I am glad I had the opportunity to work with him, to trek with him, and learn so much in the process.

Nidhi Singh holds a master’s degree in Environment Management from Forest Research Institute, Dehradun; and is currently working as Project Biologist at the Wildlife Institute of India, in the Trans-Himalayan landscape.