Who’s Watching Over The Forest?

Marvel ghaas hona… usko zyada janwar khaate, isko nahi khaate (Marvel is the favourite grass of wild herbivores, not this one),” Keshav Jamunkar tells me, as he poses for a picture in a thicket of sorghum grass, over 1.8 m. tall. The land he stands on was once his home. Trying to shoot his portrait through the tall grass, I almost step on gaur dung. He points to a broken water-pipe rising from the ground: that used to be the bathroom. I look for sadness in his eyes, but he avoids eye contact.

Jamunkar is a forest watcher, or van majoor, living and working inside the Melghat Tiger Reserve in Maharashtra for the last three decades. His village, Kelpani, stood inside the reserve, and was voluntarily relocated by compensating the inhabitants in 2014-15. The Kelpani round has three beats, and three forest guards, but Jamunkar, though lower in rank, is the most experienced staffer with unmatched traditional knowledge, which he often shares with freshly-recruited forest guards. Starting as a ‘temporary’ daily wage labourer in 1991, he was made permanent only in 2012.

Who cares for the watchers?

Forest watchers like Jamunkar are the foot-soldiers of forest and wildlife protection in India’s tiger reserves. Along with the forest guards they are posted with, they patrol 8-12 km. every working day, even in extreme weather and on treacherous terrain; make fire breaks by clearing strips of vegetation and combustible leaf litter in January and February, to control the spread of wildfires in the ‘fire season’ that follows; manage rewilded meadows by regularly uprooting grass species unpalatable to wild herbivores, and propagating the species favoured by them; clean and fill waterholes for wildlife; build check dams on stream-beds for accumulating water for wildlife for the dry summer months; and take on any other work that is required.

The majority of forest watchers in tiger reserves across India are not employed with the Forest Department, but are hired as ‘temporary’ daily wage labourers. A permanent watcher like Jamunkar is the exception, not the norm. Having worked as a daily wager for 22 years, he knows the pain of not getting wages on time. “Har saal ka vohi rona hai unka, March ke baad paanch-chhah mahine tak payment nahi hoti (It’s the same story every year for them; after March, their salaries are delayed by five-six months),” he says. Being a permanent watcher, he gets some essential items – like a pair of shoes, a raincoat, a backpack, a torch, a baton, and a first aid kit – in two to five years, but these are not made available to the temporary watchers, who are expected to do the same job, he says. 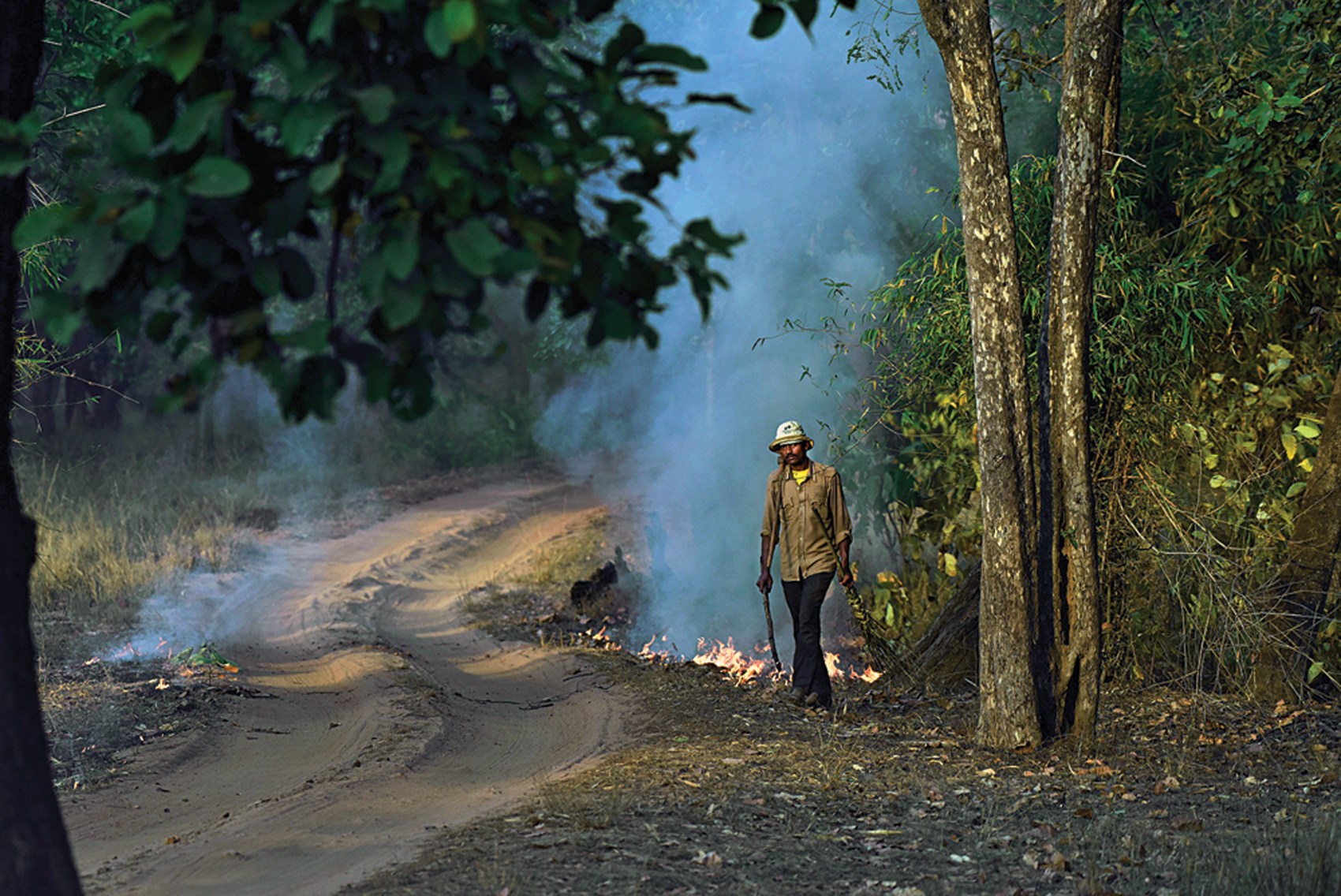 A fire watcher in the Bandhavgarh Tiger Reserve creates a fire break by burning combustible leaf litter. In addition to the watchers hired on daily wages for routine protection work, ‘fire watchers’ are hired specially for fire prevention and control during and ahead of the ‘fire season’.

Experienced watchers like Jamunkar are invaluable, knowing not just the lay of the land like the back of their palm, but also everything that grows, walks and flies over it. “Kelpani mein main chhote se bada hua… hum jab chhote the tab ye dono ghaas nahi thi yahan (I have grown up in Kelpani… these two grasses were not found here then),” he tells me, after showing two more species of grass that are not favoured by wild herbivores. Large tracts of this village-turned-meadow are dominated by marvel grass, thanks to the vision of the senior officials at the Melghat Tiger Reserve, and the traditional knowledge and hard work of forest watchers and forest guards. While surveying the meadow from the communal water tank that once supplied water to his house, he tells me that now gaur herds, sometimes 40 animals strong, enter the meadow late in the afternoon and leave late the next morning, only when the sun gets harsh.

Like Jamunkar, most watchers come from local communities that have been living in and around the forest for generations. They don’t just know the local topography, vegetation and wildlife, but also understand the perception of local communities towards the forest and the Forest Department, the factors that drive them to extract forest resources, and the complex motives behind indulging in illegal activities like lighting forest fires.They can act as a bridge, and help improve the relationship between local communities and the Forest Department. But first, they need to get their due.

Since its inception, the Wildlife Conservation Trust (WCT) has worked to improve the living and working conditions of frontline forest staff, by equipping protection huts (anti-poaching camps) in tiger reserves across the country with essential items. Though some benefits reach forest watchers, a lot needs to be done to give them their due. Job security, timely payment of wages, healthcare, sanitation and insurance are just some of the areas that need urgent reform. “The protection of India’s tiger reserves can literally be attributed to the grit and commitment of forest watchers. Despite hardships, isolation from their families, and insufficient and delayed wages, they have continued to be the first line of defense for innumerable forests that act as repositories of biodiversity and provide ecosystem services that benefit big cities and towns miles away from those forests. It is
high time these unsung heroes get the facilities and respect they so deserve,” says Dr. Anish Andheria, President of WCT.

WCT has launched a new campaign to address the needs of forest watchers, and help them get their due, titled, ‘Support our Forest Watchers’. To build a granular understanding of the living and working conditions of forest watchers across the country, data collection has begun to assess the ground realities of wage structures and disparities across states, leave structures, access to healthcare, availability of safety gear and first-aid kits, insurance coverage, and ex-gratia support. The objective of the campaign is to create public awareness about their important role in forest protection, and collaborate with the Forest Departments to improve their living and working conditions. “Without forest watchers, India’s tigers stand a lesser chance of survival. Yet, our preliminary investigations into the welfare and employment measures for these unsung heroes point to the fact that they are not catered for substantially,” says C. Samyukta, Head of Forensics at WCT, who is also overseeing the campaign. “We seek to create awareness about our forest watchers, and to lobby all tiger-bearing states to follow in the footsteps of their contemporaries who have already implemented good welfare for them.” 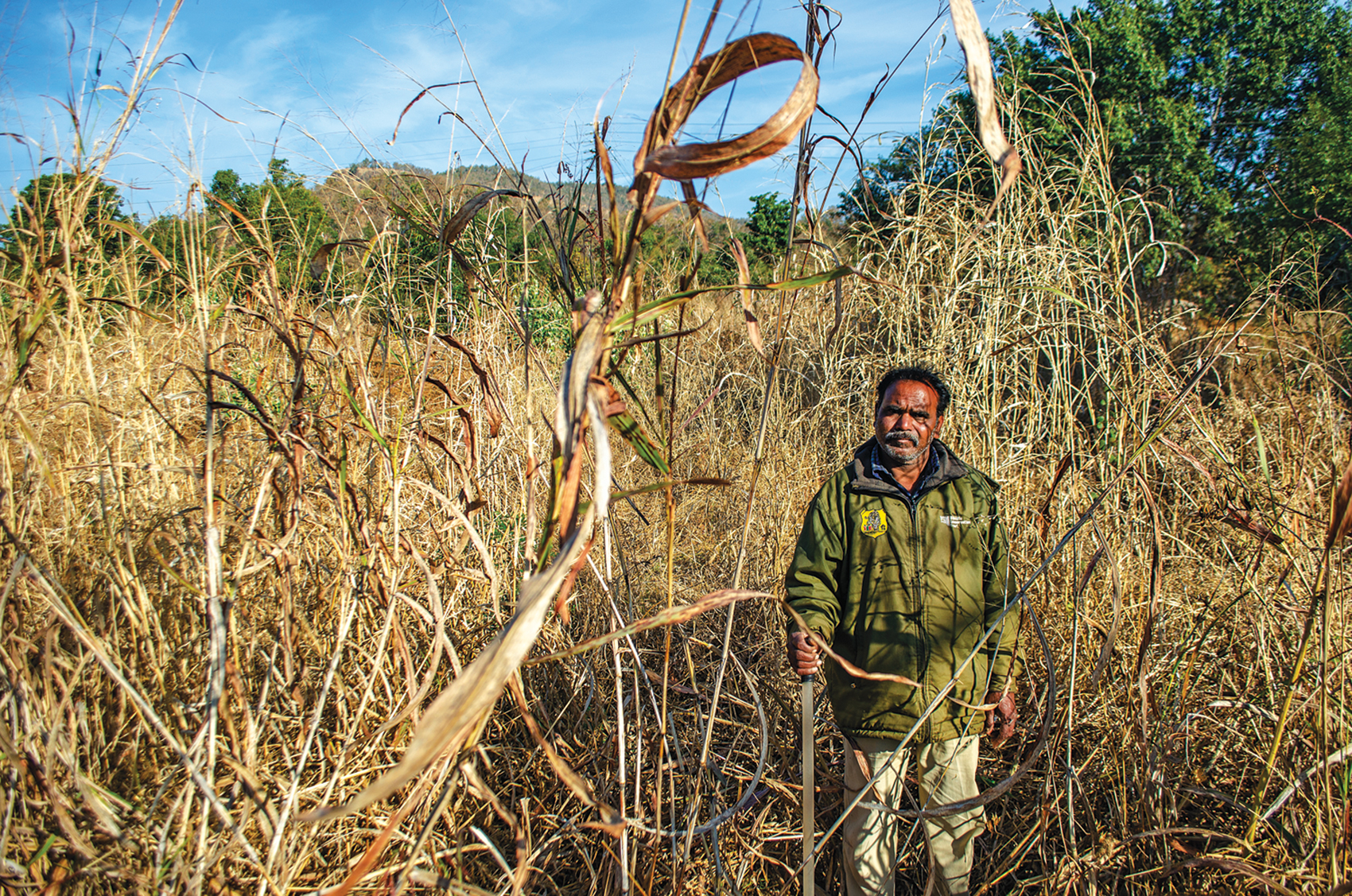 Keshav Jamunkar, a forest watcher, or van majoor, has lived and worked inside the Melghat Tiger Reserve in Maharashtra for the last three decades.

After walking around the meadow with Jamunkar in the morning, I spent the rest of the day clambering up and down forested slopes with him, stopping to observe the tracks, scrape marks and droppings (and the contents within: fruit seeds, insect exoskeletons, monkey hair and more) of several animals. He cooked a simple and delicious dinner in the evening, and then we stepped out again. He carried a stick in one hand, and a torch in another. I just carried my phone to record the nocturnal soundscape of the rewilded meadow: the continuous drone of crickets chirping, punctuated by chital alarm calls. At the spot where his home once stood, Jamunkar suddenly stopped and shined his torch into the meadow. Several pairs of eyes glowed barely a hundred metres away. A gaur herd enjoying a late dinner! We quietly traced our steps back to the camp.

WCT and Sanctuary partnered for the Save Our Tigers campaign during 2010-15, which reached over 100 million people worldwide and generated INR 95 million for tiger conservation. The funds were used to strengthen the protection mechanisms of tiger reserves across the country by equipping forest staff and their anti-poaching camps, and deploying specially designed conflict mitigation vehicles, called rapid response units. Apart from equipment that would help forest staff patrol and protect forests efficiently, several essential items – like blankets, cots, mosquito nets, first-aid kits and water purifiers – were provided to improve the living conditions in the camps.

The next morning, I had to say goodbye and make my way to the next camp, to spend twenty-four hours with another watcher and another guard. Close to the camp, Jamunkar showed me solar panels that power the water pump used to fill waterholes for wildlife. “Urja plate se achhi suvidha ho gayi janwaron ke paani ki (The solar panels have facilitated the regular filling of waterholes for wildlife),” he said. “Some basic facilities for people like you have been long overdue,” I told him. “Sahab log bohot sudharna karke diye hain (The senior officials have improved a lot of things for us),” he replied with a faint smile.