Tightening the Noose on Wildlife Crime

“Nowhere but in India can the big-game hunter get so much for his money,” says the narrator of the documentary film Tiger Shikar in India made in the mid-1900s. The camera follows a group of armed white men on elephant back, their pursuit of a tiger being guided by a local shikari. As the shikari blows his whistle and shouts the instruction ‘jao, jao’, the ‘beaters’ start flushing the tiger out of the thicket with sticks and stones, unsettling all creatures of the forest. The tiger, annoyed, finally comes out growling. The moment it comes in full view of the hunters, two rounds are fired at it. The majestic predator falls on the ground, shrouded in smoke. After two more rounds, the tiger lies almost lifeless. The mahout prods the reluctant elephant that gingerly lifts its leg to trample the tiger.

India’s wildlife has endured persecution over hundreds of years. Before the British were the Mughals. Akbar’s legacy of bloodlust for big game was carried forward by his successors – history is replete with accounts of their hunting expeditions – until the end of the dynasty.

Tigers, leopards or sloth bears, all were fair quarry for princes and sahibs alike, till hunting was finally outlawed by the Indian government in 1972. “Over 80,000 tigers, more than 150,000 leopards and 200,000 wolves were slaughtered in the fifty years from 1875 to 1925,” writes historian Mahesh Rangarajan in his book India’s Wildlife History: An Introduction.

Trophy hunting has now been replaced by poaching, fuelled by the insatiable demand for animal parts from the Asian luxury and medicine markets. Looking at the demand for body parts of just one species – the tiger – helps uncover the scale of the problem.

From its bile, blood, bones and brain, to its eyeballs, penis and whiskers (the list is longer), almost every part of the tiger is mistakenly believed to be a cure for disorders ranging from serious to mundane and even bizarre: arthritis, malaria, rabies, laziness, pimples, evil spirits and fever caused by ghosts.

Wildlife Crime on the Rise

India lost more tigers to poaching in 2016 than any year since 2001. According to data on poaching cases compiled by the Wildlife Protection Society of India (WPSI), we have lost 1,147 tigers in the last 24 years, an average of 47 tigers each year. But this is likely to be a fraction of the actual number. WPSI’s website suggests that Customs authorities multiply detected offences by 10 to estimate the size of an illegal trade! 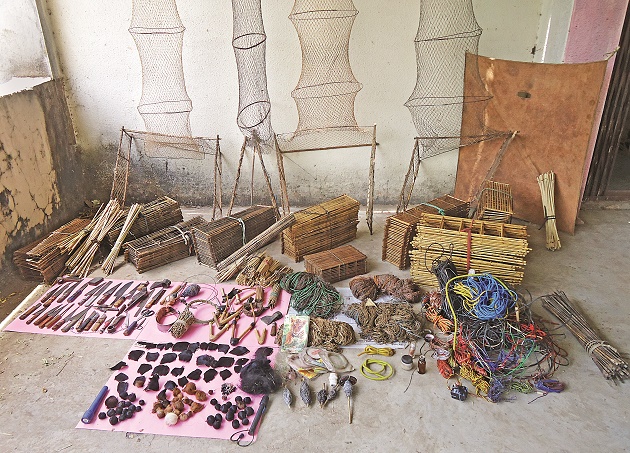 Poaching and other wildlife crimes increased by 52 per cent between 2014 and 2016, states a report titled State of India’s Environment 2017: In Figures published by the non-profit Centre for Science and Environment. More species are now under threat from poaching and illegal trade than ever before – the number of species has gone up from 400 in 2014 to 465 in 2016.

Another disturbing trend, also reported in Sanctuary (Vol. 28 No. 2, April 2008), is of the Internet facilitating illegal wildlife trade. In July 2016, the MoEFCC listed 106 websites that were ‘advertising’ the sale of rare animals and their parts. The list included Amazon, Snapdeal, Ebay, Quikr and even YouTube!

Conviction rates in wildlife crime cases are abysmally low across India. If one looks at Maharashtra, the conviction rate stood at a dismal 11.56 per cent according to media reports in 2015. A review of judgments delivered in six years showed that of the 147 court orders under the Wild Life (Protection) Act, 1972 (WPA), only 17 had recorded convictions. These figures throw light on the lacunae in the investigation, documentation, and prosecution; and explain why law has little deterrence value when it comes to wildlife crime.

According to data analysed by an independent agency, the conviction rate for cases relating to Schedule I animals is barely one per cent in Maharashtra. “This is predominantly because the accused are casually let off on bail. Once out, they tamper with evidences and witnesses, making it difficult for the prosecution to establish a clear case of conviction,” says wildlife lawyer Kartik Shukul who currently serves as special counsel for the Forest Departments of Maharashtra and Madhya Pradesh. There is an urgent need to increase the quantum of punishment for wildlife crimes. “For a first-time conviction in a case involving a Schedule I animal, the quantum of punishment is only three to seven years. Because the quantum is so low, it is considered a very trivial offence by the judiciary,” he says. “To improve the rate of convictions in India, it is imperative that this be changed as has already been done in Assam, where it has been increased to life imprisonment in case of a second conviction. All other states which either have Schedule I animals or are facing the problem of rampant poaching need to change the quantum from seven years to at least life, if not more. Also, the quantum of punishment should not be the sole yardstick on the basis of which the seriousness of the offence is decided; the same must be established by the consequences of the offence and its ramifications on the society at large.”

On its part, the Wildlife Conservation Trust (WCT) has adopted a practical approach to tackle the problem of poor conviction rates. Its Wildlife Law Enforcement Training (WLET) team has been training frontline forest staff in law enforcement since 2012. So far, 180 training sessions have been held for 11,500 forest guards across 30 Protected Areas (PAs) in nine states, and 15 forest training institutes.

Since 2017, forest staff have also been receiving training in evidence collection, site security and the application of forensics to build watertight cases. The trainings are focused at addressing the lacunae in current enforcement responses to wildlife crime that contribute significantly to poor conviction rates across India. These include weak implementation of the existing provisions of the WPA, poor evidence collection practices, improper crime scene processing methodologies and insufficient or improper legal case documentation. The trainings are a mix of classroom and field sessions. The latter involve activities in which teams process different crime scenarios, collect evidences, and make presentations after preparing casework.

To build a strong case, forest staff must apply the right sections and provisions of the WPA. “The old approach was to apply as many sections as possible, and hope that the accused will be found guilty of violating at least one,” says Kiran Rahalkar, the lead trainer in WCT’s WLET team. “If the forest officer charges the accused of violating four sections, out of which he/she is acquitted in three, the benefit of doubt swings in favour of the accused. To prevent this, we teach them precise and sharp application of sections to reduce the possibility of acquittal.”

An old practice still prevalent in Forest Departments is to apply Section 9 of the WPA, which deals with the prohibition of hunting, in every case of wildlife crime. “Sometimes, it becomes difficult to build a case on that charge; and proving it becomes even more difficult in the absence of the linked evidence,” adds Sanjay Thakur, an integral part of WCT’s WLET team. “We make forest guards familiar with other strong sections that attract the same quantum of punishment and are easier to prove.”

"Humko saari khabar mil jaati hain; hum sahi aadmi ko pakad bhi lete hain…," says a forest guard during an interactive training session, indicating that their information network almost always helps them nab the perpetrator of the crime. He then goes on to explain the real challenge – establishing links between the criminal and the crime in the court of law. To plug this gap, WCT trains forest guards in forensically sound processes of evidence collection and preservation. “Wildlife crime usually occurs in places where access to eyewitness testimony is rare. Hence, it’s important that forest staff increasingly rely on scientific evidence rather than eyewitnesses that frequently turn hostile,” explains C. Samyukta, the forensics trainer at WCT. 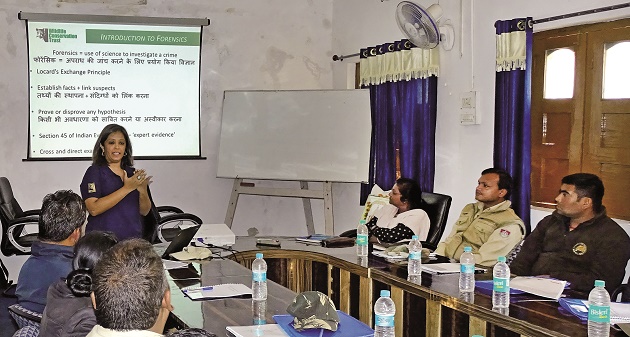 Clearly, wildlife crime has evolved over the years; and spears and bullets have been, to a considerable extent, replaced by silent killing mechanisms like poisoning and electrocution. “It’s important to establish the fact that the crime was intentional and not a mere accident. In proving that a crime has been committed, and linking the criminal with the methods and tools used, and the scene of the crime, scientific evidence plays a crucial part,” she says.

“If an animal has died of poisoning, it’s important that the forest staff collect a body organ or tissue that would exhibit the poison. Similarly, it is important for the forest staff to understand the effect that different hunting methods have on animals. Equally important is to know what kind of clues and traces criminals are likely to leave behind in the process of hunting,” she says.

Guards learn these finer aspects of forensics during WCT’s classroom sessions as well as mock crime scene exercises wherein they process a crime scene, and collect and seal evidences using tools that are part of the evidence collection kit (see "Using Forensics to Tackle Wildlife Crime" below) distributed during the training. 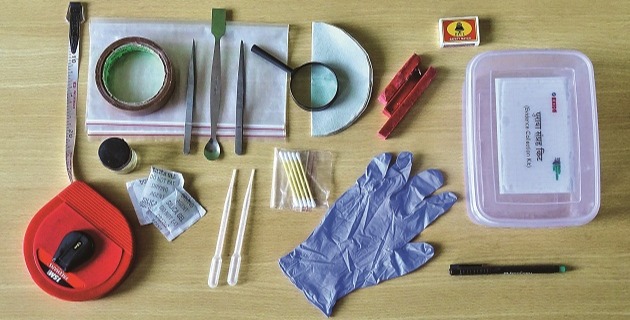 Law enforcement training is an indispensable cog in WCT’s 360° approach to conservation. As we chart new frontiers to tackle the ever-evolving threats to India’s wildlife and ecosystems, the tiger burns bright in our hearts. For the tiger is not just one species; it is the indicator of the health of our forests. For forests are not just pretty places; being biodiversity vaults, they are our insurance against climate change, and food and water scarcity.

During the wildlife law enforcement training, WCT distributes forensic evidence collection kits to forest guards. The purpose of the kit is to ensure that all evidence is collected and preserved complying with robust forensic standards, so the most can be got out of it through laboratory analysis.

To meet this purpose, the kit contains 18 essential items. Two pairs of disposable, easy to replace gloves help preserve the integrity of the evidence. A magnifying glass helps guards detect and observe microscopic traces of evidence. While spatulas and forceps aid in collection of solid samples, droppers help in collecting liquid samples like water from a poisoned waterhole. Apart from cotton swabs and filter paper as an aid to collect blood from a crime scene, the kit also contains a glass vial to collect and preserve biological samples like meat. Packets of silica gel ensure preservation of the samples and aid in preventing spoilage of biological evidence. While ziplock bags, brown paper envelopes, brown packaging tape and a permanent marker come in handy to package and secure the evidence at the crime scene itself, sealing wax can be used to seal the evidence once it reaches the forest department office. Forest staff are also required to prepare a rough sketch (nazari naqsha) of the crime scene. To prevent guesswork in measurements, the kit also contains a measuring tape. 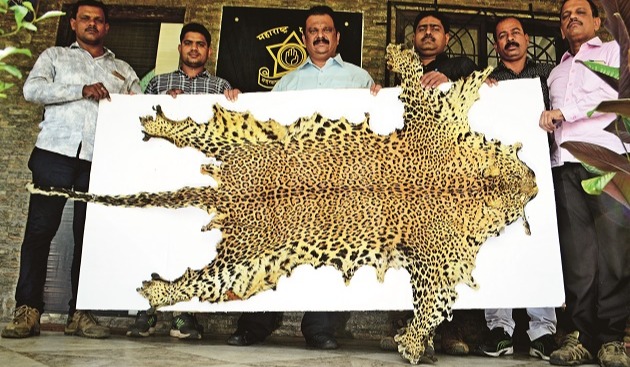 Courtesy:
1.    Reports by the non-governmental organization TRAFFIC: Reduced To Skin And Bones – Re-Examined, and Scale of Pangolin Trade in India between 2009–2017.
2.    Report by the non-profit Centre for Science and Environment: State of India’s Environment 2017: In Figures.