The Making of 'The Wild Meat Trail'

Tai set down his backpack of cane and bamboo at the base of the tree. Barefoot, he clasped the trunk with his arms and legs and climbed up to about nine metres high. Swiftly he slid across a thick horizontal branch and extracted a dead red-bellied squirrel out of the hand-made trap he had set two days earlier.

Cameras in hand, Shilpi and I stood below on the rainforest floor with Jarjo and Maga, the other Nyishi hunters who were guiding us through the community forest surrounding their village. Dense forests crowded around us and it was impossible to see further than a few metres ahead. For us, travelling with camera equipment and camping gear, it was an experience unlike any other.

Tai slid down the tree and was on the ground in less than 30 seconds. Maga picked up the squirrel and turned it over, then placed it in his pack. As we continued along the same steep path that had taken us this far, slipping and slithering across leaf litter, our companions pointed out other traps on the way. We crossed gushing streams on bridges made of single tree trunks. On our way, Jarjo mimicked the sounds of a barking deer fawn in distress, in the hope of luring its mother, and pointed out the tree gum that hunters used for trapping birds.

The Nyishi tribes, like many of the other tribes of the Northeastern states, have been hunting these forests for generations. In addition to using traditional traps, today’s hunters catch wild animals using guns and metal traps. The meat, fur, feathers and bones of animals are consumed, sold, used for decoration, and for rituals during festivals. Wild meat from forests such as those around Rachi Village has reached the marketplaces in bigger towns, where it is sold at high prices.

When we first visited these markets, we were deeply shocked by what we saw. Hundreds of birds were bunched together in clusters – hornbills, barbets and many rare species. They were being sold for Rs. 500 to 800 per cluster. Civets and squirrels were on sale for under Rs. 1,000. A barking deer was sold to a government officer for Rs. 6,000. While the meat is mostly traded for local consumption, the gall bladders of Himalayan black bears is retained by hunters as these could be sold at a premium ranging from Rs. 3,000 to 15,000 in different parts of the Northeast. It can be assumed that the buyers were usually dealing with illegal wildlife trade on a larger scale.

The women selling the wild meat had straight answers – they were earning about Rs. 2,500 a month from vegetables and fruits, and about Rs. 15,000 from the sale of wild meat, which meant instant cash for them.

The sheer abundance of wild meat in the markets was an indicator of what is found in the forests of the Northeast. But that abundance was clearly on the decline. Forest after forest is silent as bird populations decline. On the forest floor, deer, civets and many other mammals are disappearing while Himalayan black bear cubs are becoming orphans. 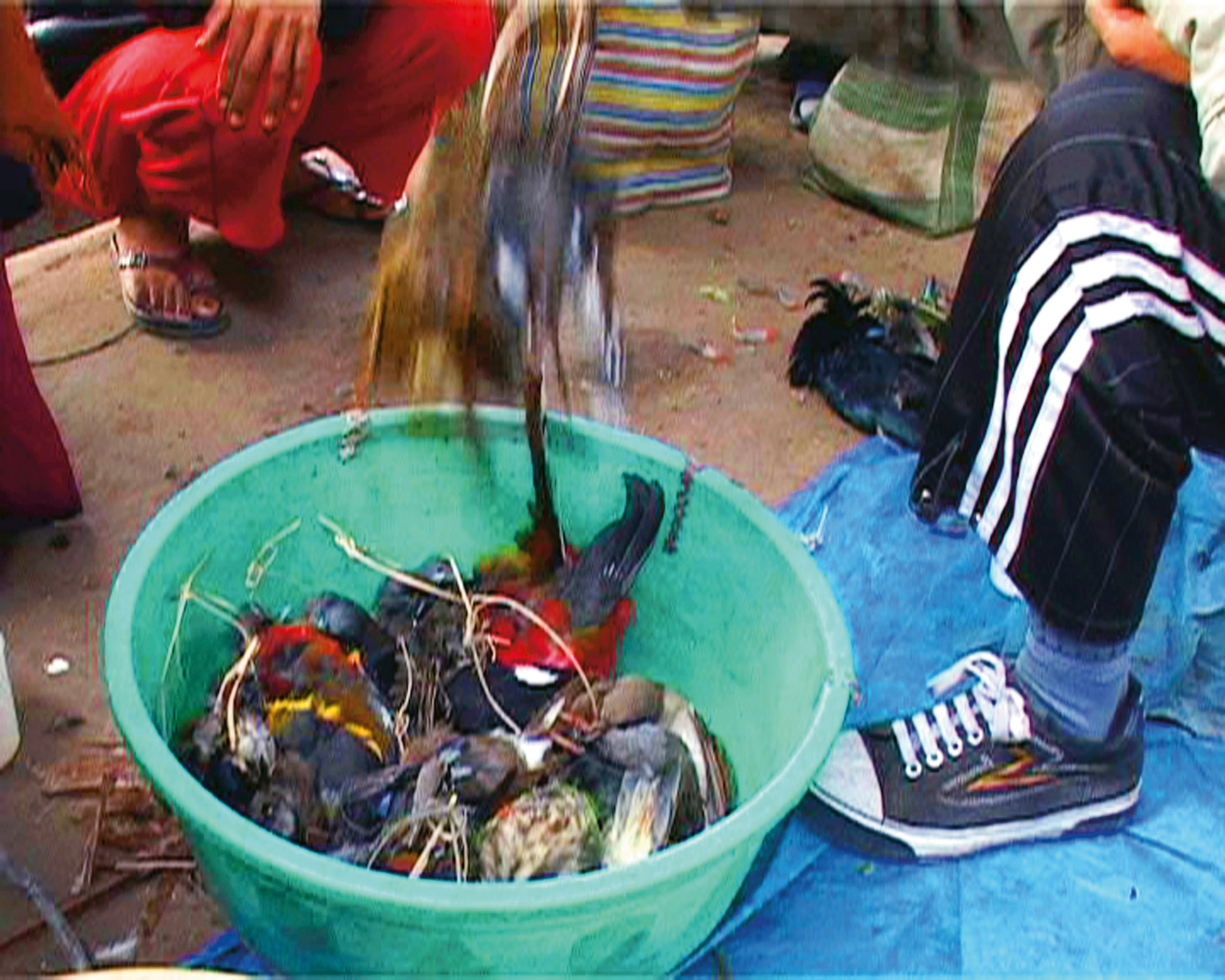 The burgeoning illegal wildlife trade is silencing the forests of the Northeast. Species such as the slow loris Nycticebus bengalensis (banner) are mostly sold for the pot. The filmmakers documented how hundreds of animals from rare birds (above) to civets and barking deer were available on sale in local markets. Photo: Shilpi Sharma.

We continued to film the three young men and walked until evening before settling down at a clearing. Our Nyishi companions brewed black tea and we sat around a small fire. As I gazed into the flames, I recollected how our journey into the Northeast had begun.

In 2002, we filmed the very first rehabilitation of two orphan Himalayan black bear cubs in the Pakke National Park in Arunachal Pradesh. The Arunachal Forest Department and the Wildlife Trust of India were working together to successfully rehabilitate the cubs that had been orphaned by hunting. But sadly, we knew that even with a successful relocation, nothing stopped the bears from being hunted down again as adults.

Hunting is common in all the seven Northeast states of India – Arunachal Pradesh, Assam, Nagaland, Tripura, Manipur, Meghalaya and Mizoram. Over the next five years we criss-crossed through the Northeast in shared jeeps, buses and on foot. Our goal was to document the extent of hunting and to determine whether there was any hope for the future of wildlife in the Northeast.

In the process, we spent time with several tribes including the Apatanis, Chakesang, Nyishis and attended many of their festivals. We witnessed the traditional uses of animal parts – the langur head, the claws of monkeys and cats, the skin of bears and other animals and the beaks of hornbills. On one occasion while filming in a village we came across a young boy who had just returned with a monkey kill. He wanted to use the fur to make a new cover for his ‘dau’ (dagger) case. His reasons were simple – he was attending a wedding and it was a matter of prestige.

In Chizami village, Nagaland, the interviews we did with different generations of hunters, provided an interesting revelation on the decline in wildlife here. The older hunters had intimate knowledge of the animals – their habitat, the food they eat, even their smell. They could identify the animals from the photographs very easily. The younger hunters had much less information on the animals and the teenage boys had hardly seen any mammals.

Hunters like Maga, Tai and Jarjo were now finding themselves wandering further and further afield to find the animals they were seeking.

Hope For The Future?

In January 2007, in Rachi Village they arrived at a consensus: they decided to self-impose a ban on hunting for three years. In some other isolated pockets of the Northeast there are people from the community who are trying to reverse the trend. In Khonoma, Nagaland the youth took upon themselves to ban hunting as their forests were almost silent. Incredibly, they have managed to sustain the ban for 10 years to revive the wildlife population and set up infrastructure for eco-tourism.

Many of the hunters we spoke to were willing to be wildlife guides if they were given a chance to make a livelihood. In Manas, Assam – there is already a successful example where ex-poachers have turned into forest guides and are doing that at a much lesser income because they realise that it is more sustainable.

The making of ‘The Wild Meat Trail’ has been an eye-opening experience. Our film is just a glimpse into the many layers and complexities that shroud the wild meat trade in the Northeast. Most powerful for us are the glimpses of hope in the film – the examples of change, though few, are the first steps towards a more sustainable future. The urgency of the situation, however, cannot be ignored. Much, much more needs to be done and it needs to be done now – before we lose what remains of our wildlife, the spirit of the people, their connection with the forest and our opportunity to forge a new path for India that will set an example for the rest of the world.

The film ‘The Wild Meat Trail’ by Dusty Foot Productions won the ‘Panda Award’  in Wildscreen 2010. Also known as the ‘Green Oscar’, Wildscreen is one of the most prestigious film festivals on wildlife and environment. The author would like to thank Maya Khosla for her editorial inputs.