It was the coldest winter in the Kashmir valley in the last 30 years when I arrived at Srinagar Airport in February 2021. So cold that the Dal Lake was partially frozen during ‘Chillai-kalan’, the harshest period of winter that lasts around 40 days. I was here in search of a rare and elusive wild animal that I had wanted to sight for over three years – the markhor Capra falconeri, the world’s largest mountain goat.

Like most high-altitude Himalayan wildlife, it is easiest to sight these animals when they descend from their summer, mountaintop homes to the valleys in winter. The extreme cold in Srinagar was therefore reason to hope, as the animals would probably be lower down in the valleys. 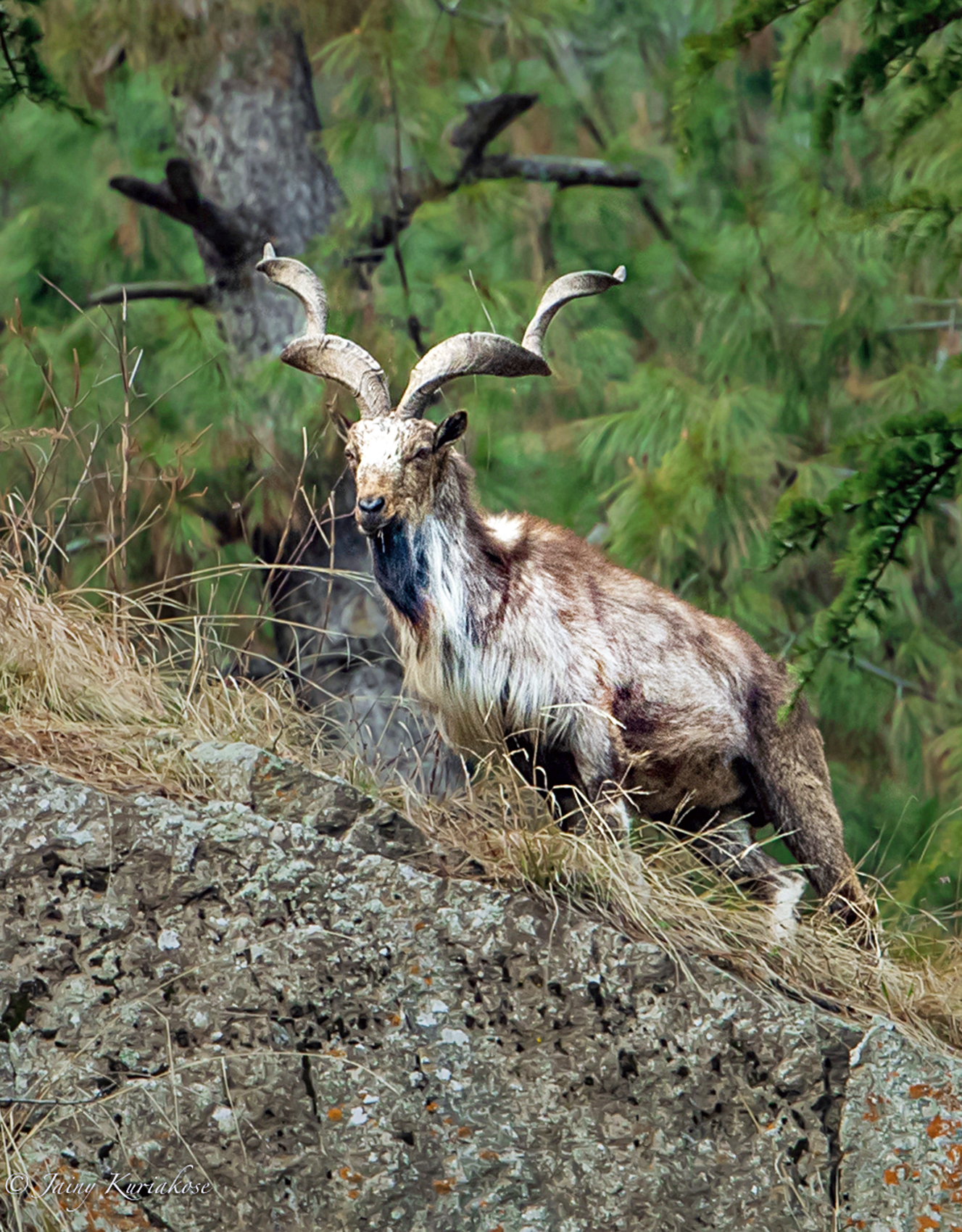 Markhor in Persian means ‘snake-killer’, named so for its mythical power of killing snakes with its horns and eating them. However, like other goats, the markhor is actually a herbivore that grazes on grass and leaves on mountain cliffs and slopes. Adult males can reach a height of 186 cm. at the shoulder, and have large corkscrew shaped horns that can grow to 160 cm.! This coupled with the long hair on their chin, throat, chest and flanks makes the species possibly the most majestic of the Capra genus. Females have much smaller horns, up to 25 cm. long, and have comparatively shorter hair.

Markhor are creatures of the high mountains. Scattered herds are found across the scrublands, open woodlands and mountains of central Asia, Karakoram and the Himalaya in Turkmenistan, Uzbekistan, Tajikistan, Afghanistan, Pakistan and northern India. Here, they are endemic only to Kashmir and found nowhere else in the country. Out of the three markhor subspecies recognised by the IUCN, the astor markhor or flare-horned markhor Capra falconeri falconeri is found in the Kashmir region. It is locally also recognised by another scientific name, Capra falconeri cashmiriensis or Kashmir markhor.

After securing the necessary permits to visit the Kazinag National Park, a markhor stronghold, I headed for Lachipora village in the Baramulla district. This quiet, picturesque Himalayan village, where step-farming is practised on mountain slopes, would be my base for a week. A small stream named Kazinag, originating from the Kazinag glacier, crisscrosses the village until it meanders down to meet the Jhelum river. Largely inaccessible, the high mountains around the village teem with wildlife such as the markhor, musk deer, goral and the apex predator, the common leopard. Soon after settling down, I set out in the evening to explore the stream and scan the mountains in anticipation of discoveries ahead. In the distance, I saw a herd of goral grazing peacefully on a slope, oblivious to our presence. The stream was partially frozen and we trudged through melting snow along a small trail that locals used to fetch dry grass for their cattle in winter. That evening I met Dr. Riyaz Ahmad, Head of the Markhor Recovery Project, for the Wildlife Trust of India (WTI). He has been studying the markhor for over a decade and I was fortunate to be invited to join him on a field visit the next day.

We set off early the next morning in the company of local forest guard, Latif, who has guided several researchers and wildlifers who come by his village. It was a tough climb up the mountain path, but we were rewarded by chance encounters with a small group of Kalij Pheasants and Himalayan Monals that Latif said were common to the area. Himalayan Griffons and Golden Eagles circled the sky above effortlessly, using thermals as large raptors do. Within an hour we were exhausted but glad to reach our campsite after tramping through knee-deep snow. Here we rested, at an inconspicuous wooded clearing where our presence was well hidden. Markhor are most active early mornings and late evenings, so we patiently waited for quite some time. The slopes where the markhor were most likely to be spotted were separated from our location by an expansive deep valley, making visibility and photography near impossible. But this was our best chance to observe the elusive goat, which sensibly stays away from humans whose presence it detects thanks to its incredible sight and strong sense of smell. 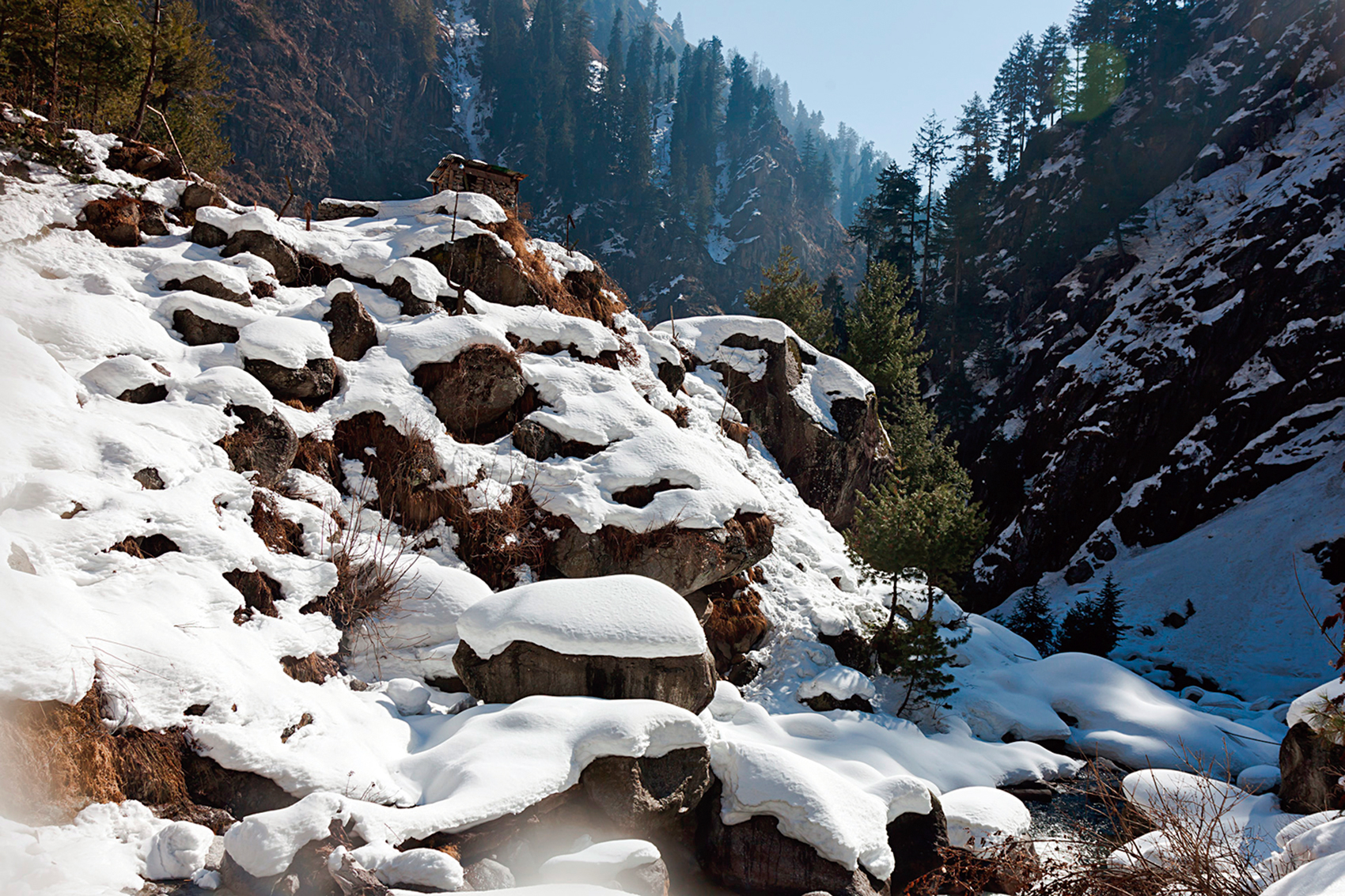 The author visited the Kazinag National Park in February 2021 in winter, when the landscape is cloaked in snow. As with most high-altitude Himalayan wildlife, it is easiest to sight the markhor when they descend in winter from their summer, mountaintop homes to the valleys below. Photo: Samyak Kaninde.

We were blessed. The markhor did indeed make their appearance. First, one sub-adult male, then his small harem of females, with a few young in tow. Exhilarated, we reveled in the rare sighting and though we knew where they were, it took a while to actually spot them. Their incredible brown coat gives them the ability to virtually melt into the mountains. As we watched, we could not help but marvel at the way in which the sure-footed animals grazed nonchalantly on the near vertical mountain slope with intuitive ease. Through our field glasses we watched with bated breath as a sub-adult male used his short hind legs to support himself while reaching far out for a morsel of grass. The young ones never wandered far from their mothers, almost tracing their footsteps, sometimes hesitant, and other times, hopping and skipping playfully about.

The best way to spot them, we learned, was to look out for their prominent black and white legs. Contented to watch the group, we were gratefully taken aback when a huge class four male made his appearance! As with other Capra species, male markhors are classified for their age by the length of their horns. The imposing male that held us in a hypnotic trance sported a huge horn with five twists, demonstrating why their corkscrew-like horns are such prized possessions. While observing him, five other males came into view. They were grazing in close proximity while the largest sat indolently on the slope. It was a rare and wonderful sighting because females most often form small groups with their young and move about, while adult males are solitary, some moving in bachelor groups away from the mixed herd. 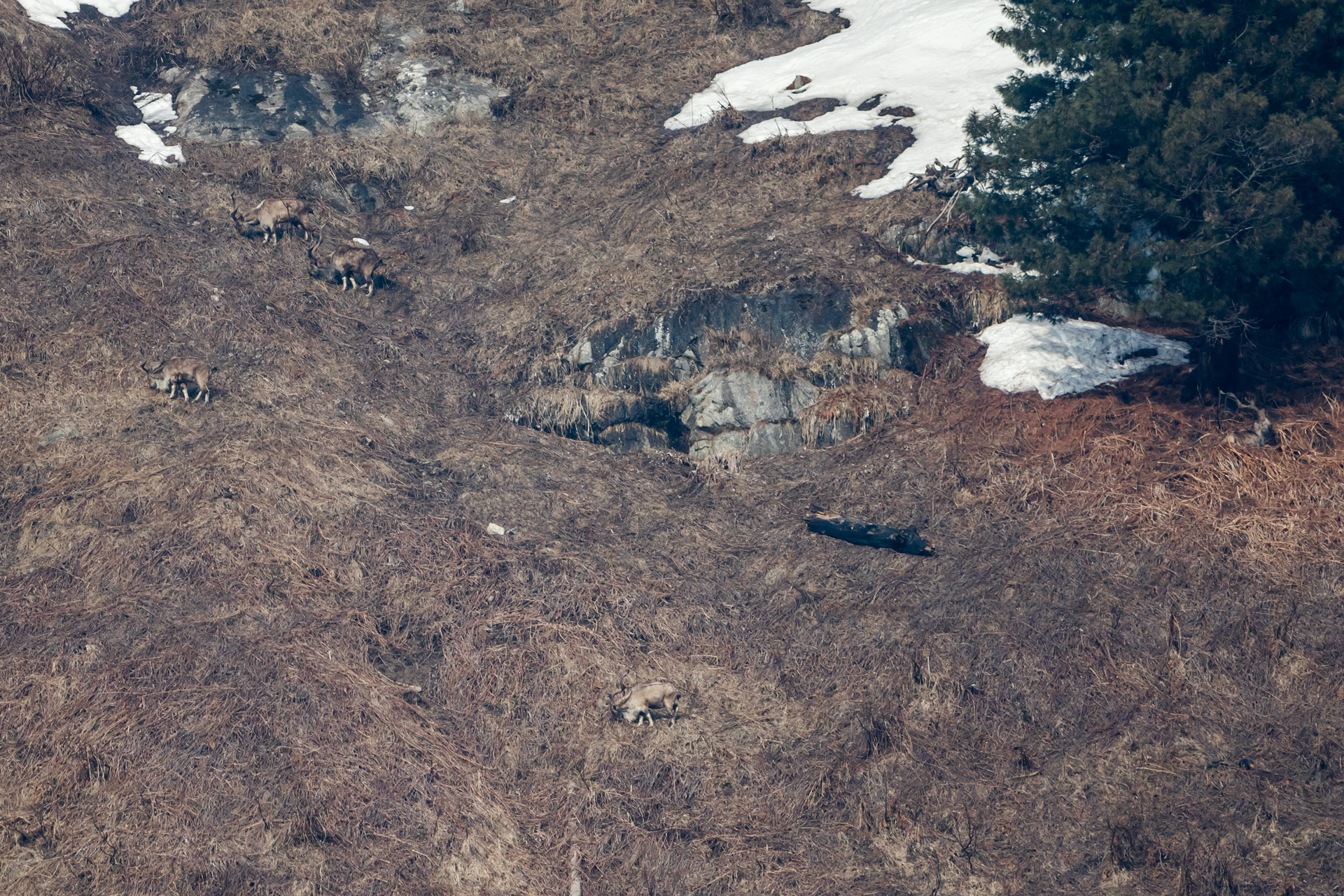 Spot the markhor -- how many do you see? Markhor camouflage so well with their surroundings, they are difficult to spot unless you know how to look for them. Photo: Samyak Kaninde.

Over the next five days, we explored different aspects of the valley and mountains where we saw several markhor herds. One sighting was particularly memorable. We were returning to the valley as excessive melting snow had prevented us from crossing a frozen, slippery stream. Scanning the nearby mountains, we found a lone female with two of her young moving along the vertical slopes, extremely close to where we were. We froze the moment we saw the family so as not to disturb them. Normally, females give birth in summer to a single young, rarely two. By the time winter arrives, kids follow their mothers down to the valley. At one point, we saw a kid stumbling on a rock and the mother immediately nudged her offspring towards a safe foothold. Latif reiterated how lucky we were to observe this family at close range. By now a cold chill had picked up as the sun sank lower on the horizon. Blessed, we looked forward to the warmth and comfort that awaited us after we covered the long distance towards our village camp.

On my last day in Kazinag, I was overjoyed to observe a group of nine strong class four males. This time the climb was tougher as we had to confront a small avalanche on the way. But everything was worth the sight of those magnificent mountain monarchs.

On our return, we were greeted by our host’s grandmother who excitedly confirmed that as many as five markhors had approached the village, pointing to the slope where she had seen them. Peering through my binoculars I soon spotted one, a lone male, grazing peacefully. The others had become one with the mountain. 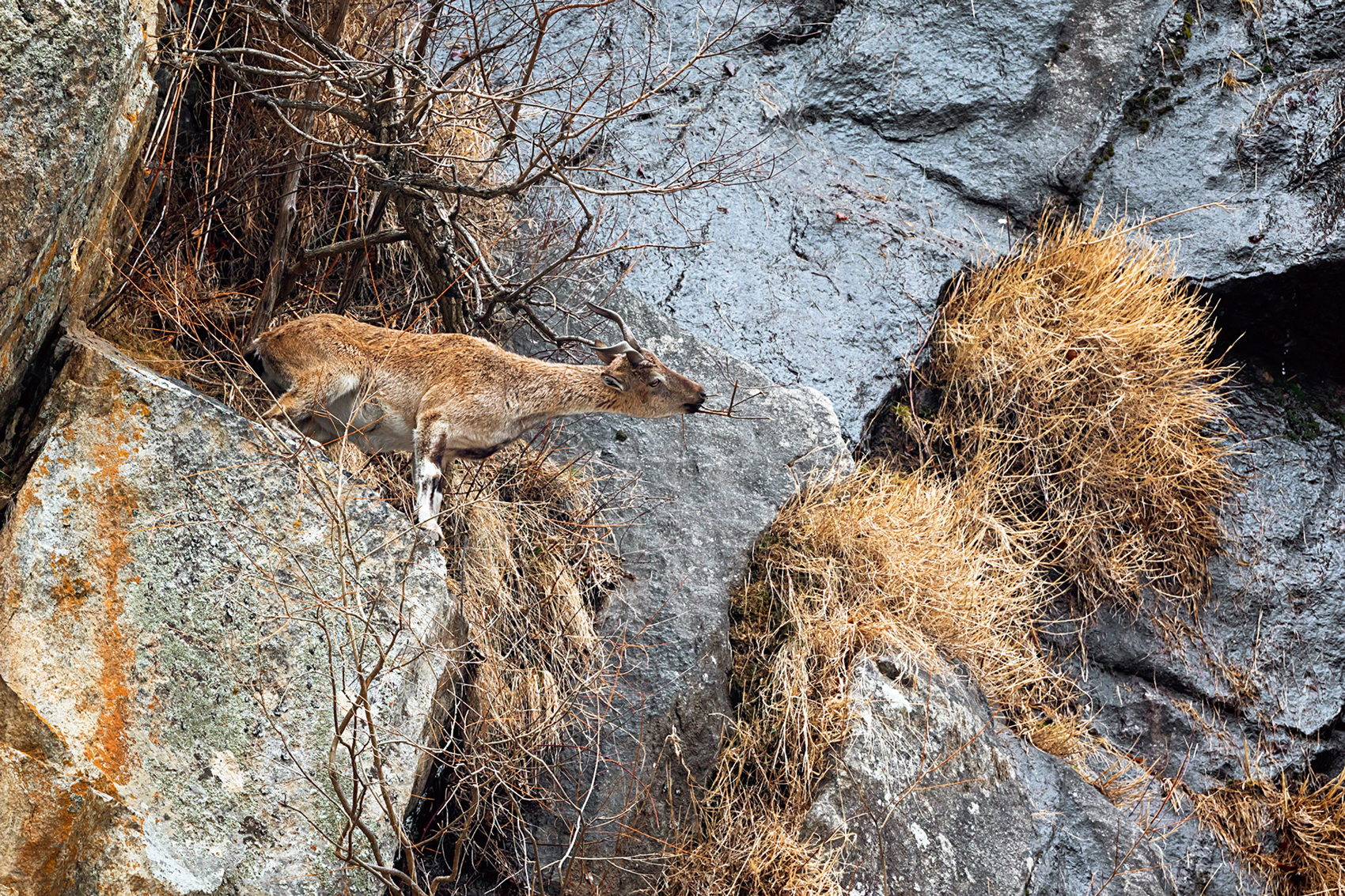 A female markhor, discernible by the smaller horns, navigates a near-vertical mountain cliff to graze with intuitive proficiency. Over the course of a week, the author was fortunate to spot several markhor herds. Photo: Samyak Kaninde.

As I closed my eyes to sleep that night, I could not help but wonder whether the magnificent markhor would be able to survive the trials being placed in their way by Homo sapiens… the ‘wise’ ones. 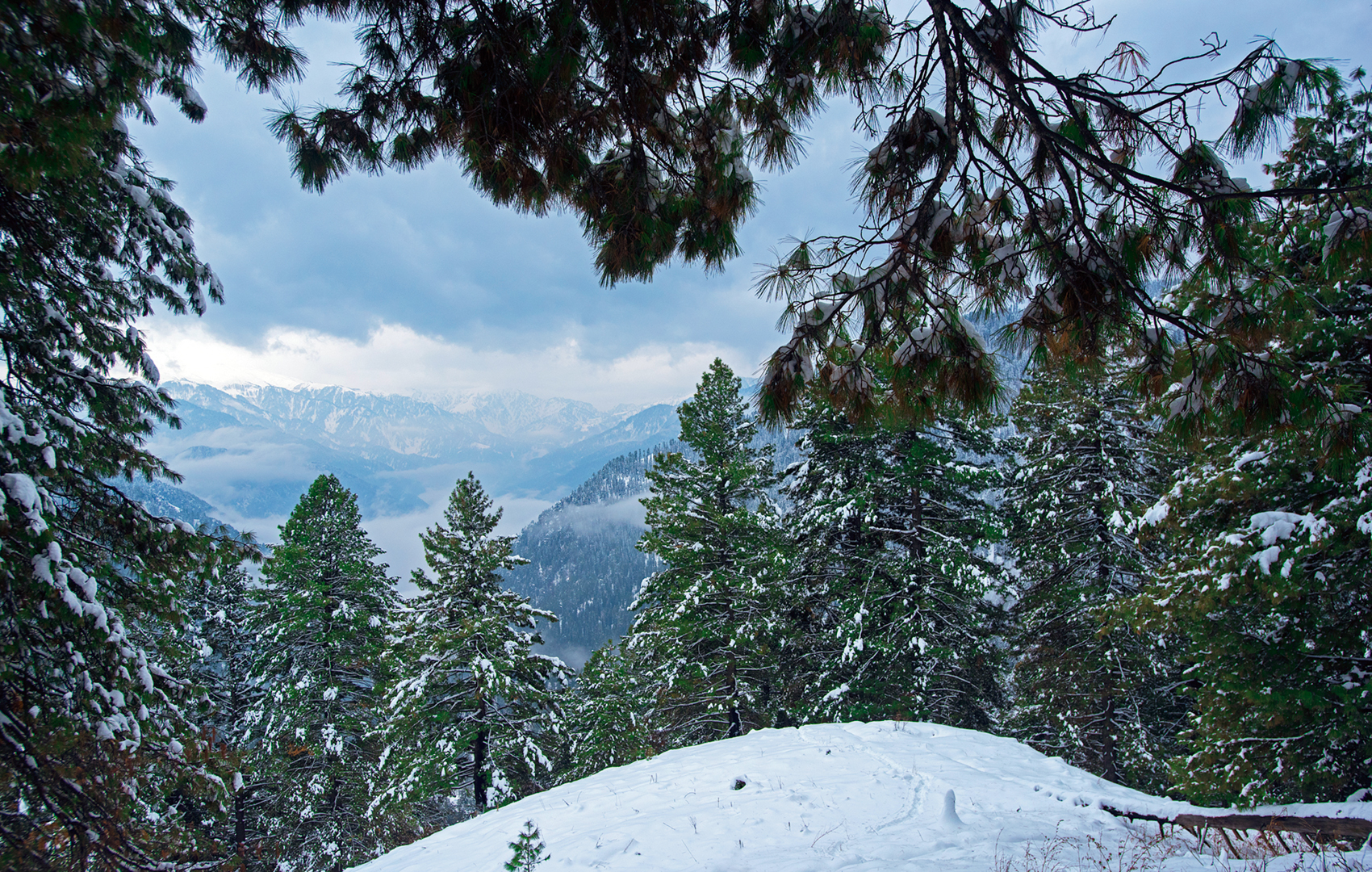 Close to the Line of Control, the Kazinag National Park with its dense deodar, pine and fir forests and elevated cliffs, is one of the last remaining strongholds for markhor in India. About 200 individuals now survive here. Photo: Dhritiman Mukherjee.

The markhor was declared extinct in India in 1997 and believed to be so until the Wildlife Trust of India’s range-wide survey in Kashmir in October 2004 – April 2005 revealed the existence of the species. At present, a significant population of markhor, an estimated 200, are found in the Kazinag National Park (170 sq. km.), an improvement from the 130 estimated in 2005. Found in the Baramulla region, it is close to the Line of Control (LoC) bordering Pakistan, in one of the most hostile political regions in the world with frequent skirmishes with militants. Due to this, hardly any studies or information about India’s markhor were available until the last decade. 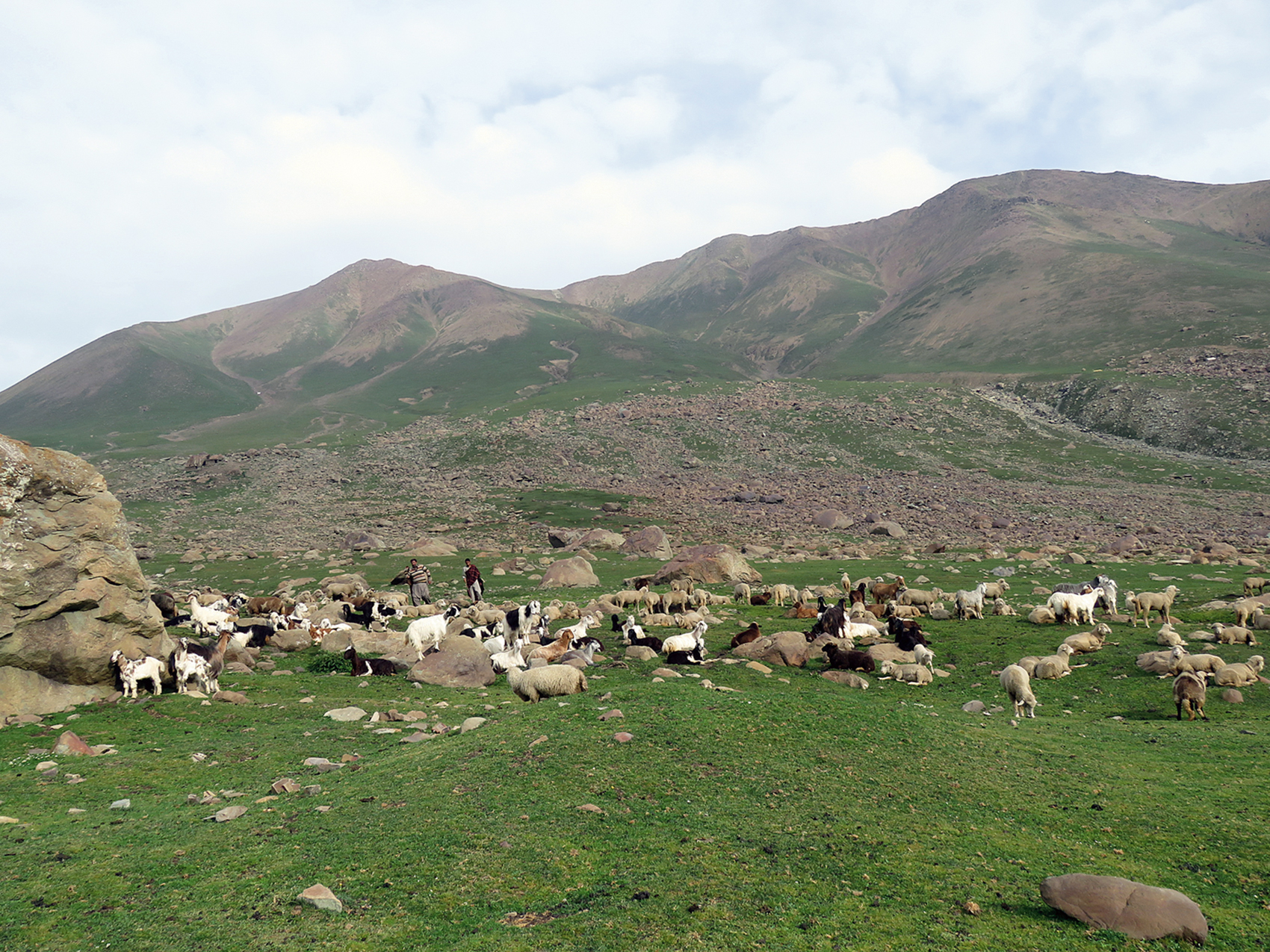 Kashmir’s second home for the markhor, the Hirpora Wildlife Sanctuary witnesses a summer influx of migratory herders and their livestock that graze on the sparse vegetation. The Wildlife Trust of India (WTI) works with these communities to address these and other threats. Photo Courtesy: Wildlife Trust of India/Sameer Khazir.

WTI’s Kashmir Markhor Recovery Project works closely with the Department of Wildlife Protection, Jammu and Kashmir, on both ecological and community conservation measures to save the markhor. In addition to the residential communities on the fringes of Kazinag and Hirpora, hundreds of migratory herders annually visit the year during summer months between late May to October. “These migratory herders, of the Gujjar and Bakarwal communities, come from the Rajauri and Poonch areas. Their livestock grazing causes competitive displacement of markhor from their key habitats. Additionally, timber extraction (of juniper, pine and fir) for firewood use and markhor poaching for meat and horns are significant threats,” says Sameer Khazir, Field Officer of the project. He adds that of late, the migratory communities are also bringing in herds of outsiders and other landlords to graze for additional income, increasing the pressure on the land. “We’re working with these communities to return them to their traditional herding practices. We are also linking them to welfare programmes like the Pradhan Mantri Ujjwala Yojana scheme, to reduce fuel-wood dependency. We recently distributed gas cylinders as well,” he says.

Due to the stable population across different geographies, IUCN has downgraded the status of markhor from ‘Endangered’ to ‘Near-Threatened’ recently. However anthropogenic pressures on the animal including the development of roads (such as the Mughal road recently built through Hirpora, allowing easy access for migratory herders), infrastructure and mining pose new challenges for sustaining this small population.

“We have been able to highlight this species and its conservation in J&K, which has been important. The government is now interested in protecting the animal, and we are trying to work though there are many challenges. There is a lot more to do. For instance, though on paper the Hirpora Wildlife Sanctuary is about 350 sq. km, in reality not one kilometre is free of disturbances. Perhaps if at least 40 sq. km. can be made disturbance-free, it could have a great positive impact,” says Dr. Riyaz Ahmad, Project Head.

Samyak Kaninde is a nature and wildlife photographer who splits his time between the Himalaya and forests around India. He loves to capture urban wildlife around his home.