The future of the gharial, red-crowned roofed turtle, Indian Skimmer and several other species of the Chambal River is threatened by the Madhya Pradesh government’s plan to legalise sand mining on the banks, a crucial part of their habitat.

In December 2021, the Madhya Pradesh (MP) government proposed to the Ministry of Environment, Forest and Climate Change (MoEFCC) that sand mining be legalised at five stretches of the National Chambal Sanctuary (NCS) on an area of 292.39 ha. The standing committee of the National Board for Wildlife (NBWL) is seriously considering this proposal.

The red-crowned roofed turtle Batagur kachuga and gharial Gavialis gangeticus, both critically endangered species, use the sand banks for nesting, making sand mining a significant threat. The endangered Indian Skimmer also uses the sand banks and sand bars for resting. Meanwhile, gharial bask on sand banks. Recently, India has made a proposal to CITES to grant more protection to the red-crowned roofed turtle. 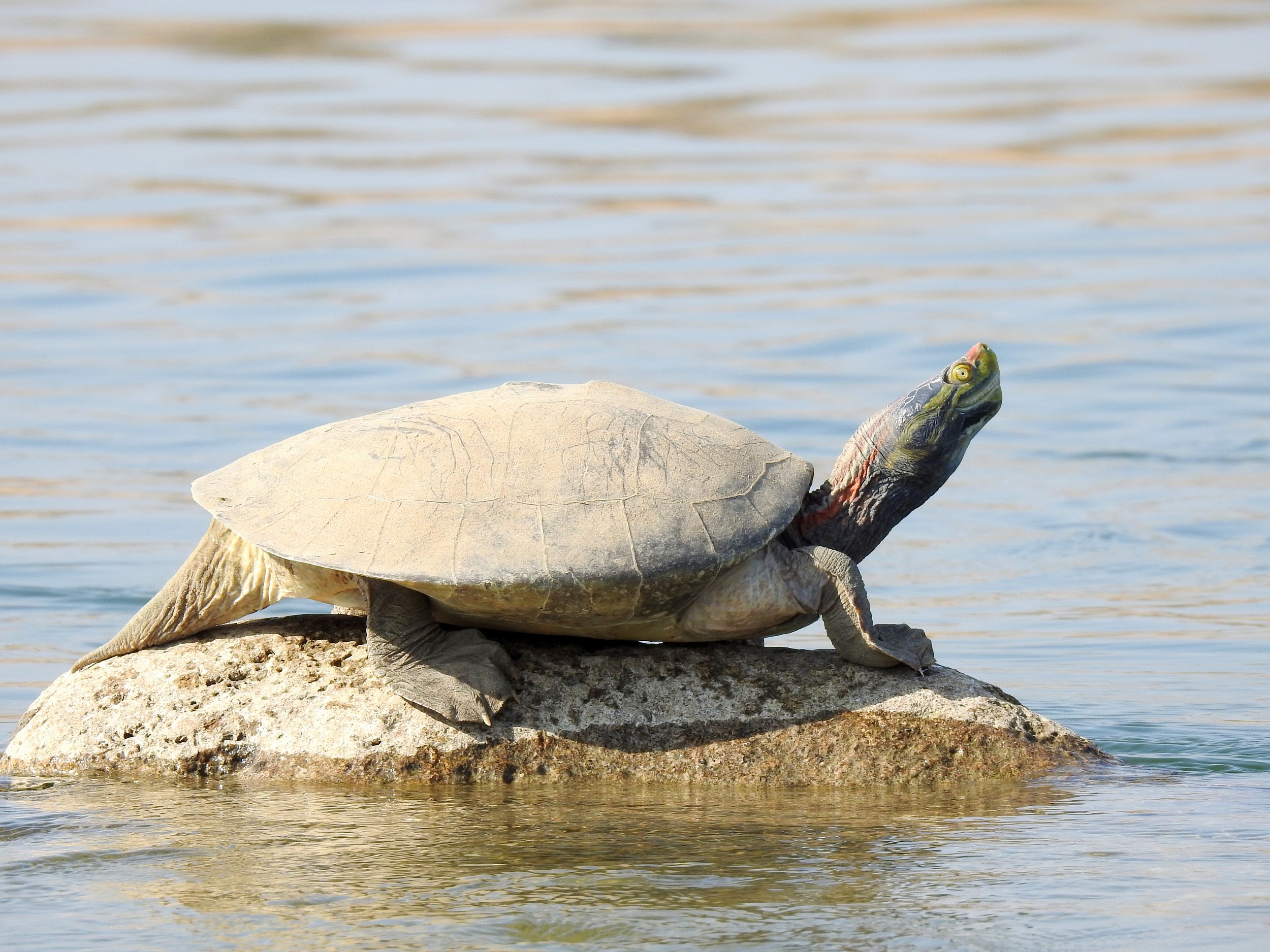 An adult male Batagur kachuga in the National Chambal Sanctuary. The red-crowned roofed turtle is a critically endangered species. India has given a proposal to United Nations CITES (Convention on International Trade in Endangered Species on Wild Flora and Fauna) to move the Batagur kachuga from Appendix II to Appendix I. Appendix I has species threatened with extinction and will ensure more protection from trade. Photo: Public domain

Experts point out that all the stretches proposed for sand mining are not equal in terms of impact. Two of the five selected stretches are upstream on one of Chambal’s tributaries (the Parbati river), two are above Rajghat near Morena, and one is right downstream near Udi Bhind Bridge of the NCS. The Udi Bhind site is a prime nesting area for the gharial, red-crowned roofed turtle and Indian Skimmer, and sand mining at this location will have a far more adverse impact on wildlife than the others. Experts believe that ideally, each site should be considered with respect to its potential impacts, and then the proposal should go forward, but only in the minimal impact areas if all of the other safeguards are exhausted. 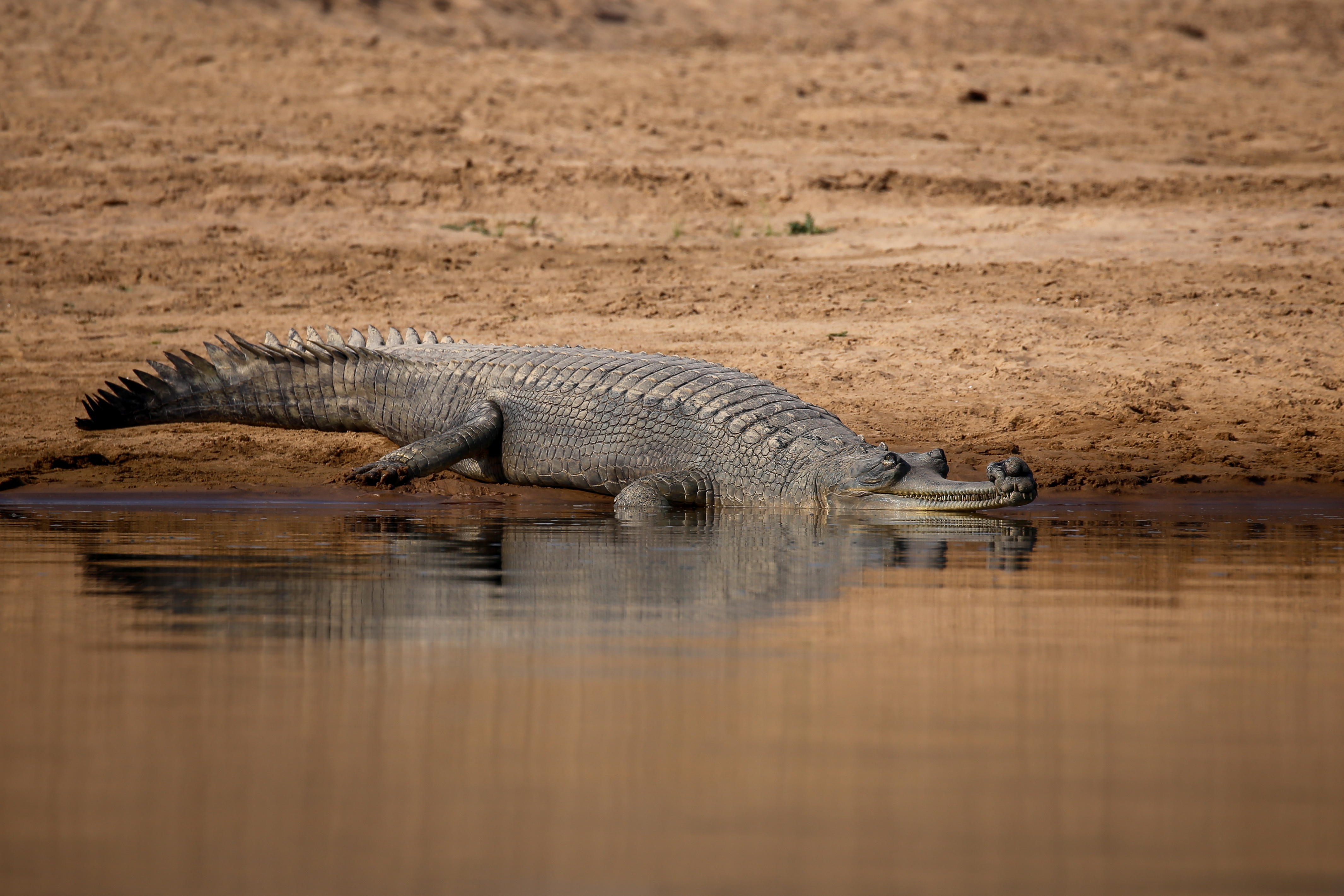 A gharial male on the banks of the Chambal River. Both sexes of the Gavialis gangeticus have a long, narrow snout, and the adult male has a ‘ghara’, a bulbous growth, at the tip. The males can grow up to 6 m.,while the female can grow to 4.5 m. Photo: Saurabh Sawant

Riverside observers report an increase in illegal sand mining at the river over five years. During the COVID-19 pandemic lockdowns, this activity greatly accelerated as people returned to the area and figured out ways to make money. Everyone with a tractor and trolley at the ready, began excavating sand from the Chambal for cash in hand. A SANDRP report notes large-scale illegal sand mining throughout the NCS across shorelines in MP, Rajasthan and Uttar Pradesh.

Meanwhile, India has given a proposal to United Nations CITES (Convention on International Trade in Endangered Species on Wild Flora and Fauna) to move the Batagur kachuga from Appendix II to Appendix I. Appendix I has species threatened with extinction and will ensure more protection from trade.

The gharial, endemic to India, Bangladesh and Nepal, is already listed in Appendix I. The NCS has the largest breeding population of gharial, ten times larger than gharial surviving anywhere else in the world. “The Chambal population is self-sustaining, and our studies over the last 15 years suggest it is increasing year by year,” shares Professor Jeffrey Lang, a conservation biologist and senior scientific adviser for the Gharial Ecology Project (GEP), affiliated with the Madras Crocodile Bank Trust.

Jailabdeen A., a gharial researcher and GEP’s project coordinator adds, “Open, free-flowing rivers with high sand bars, like the Chambal, are crucial for this rare crocodilian species for breeding, nesting, incubation, and successful hatching.” Every year, the estimated 500 nests in over 425 km. stretches of the NCS produce more than ten thousand hatchling gharials. 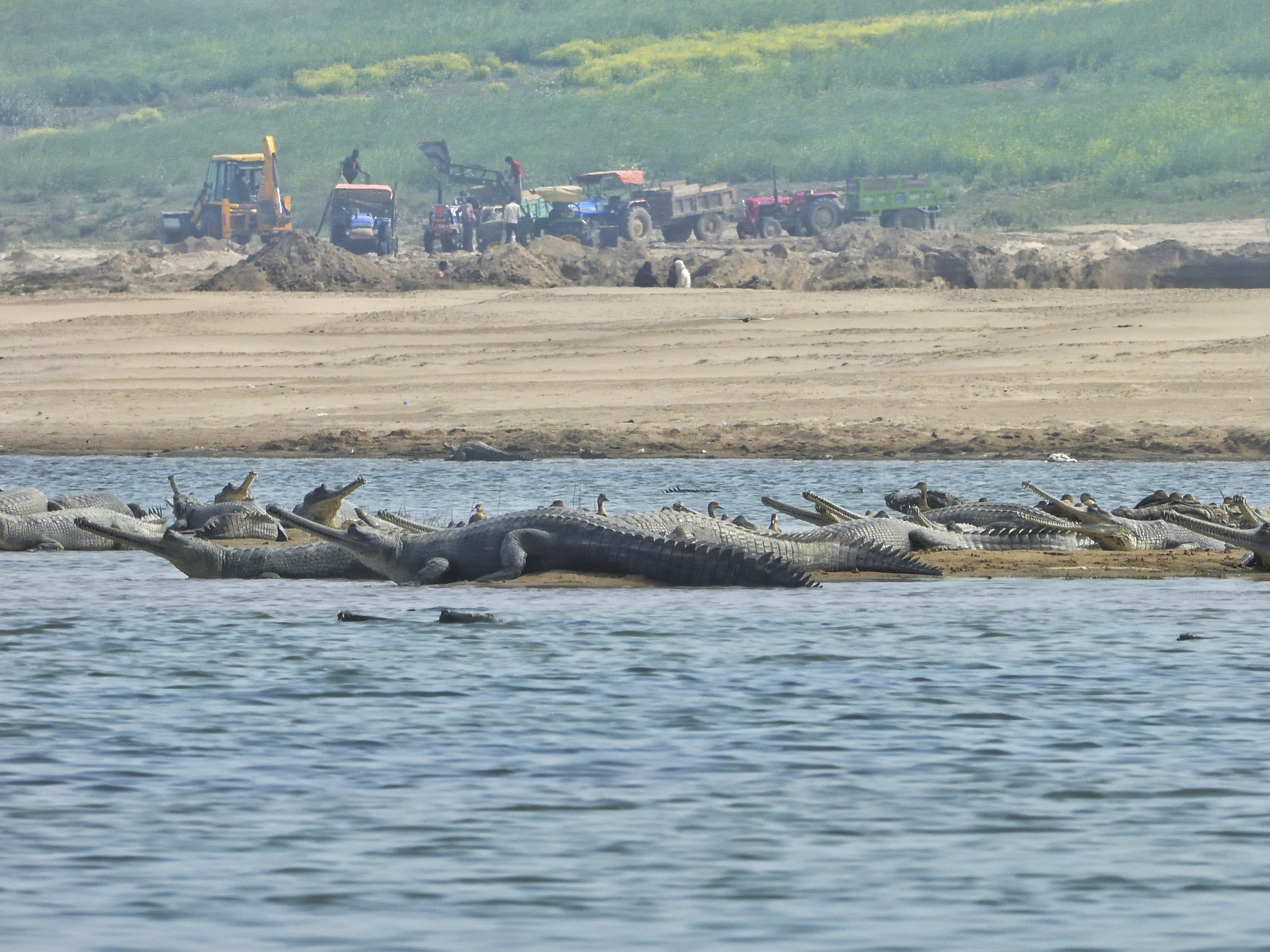 Several gharial were spotted huddled on the banks of the Chambal river in December 2019. This crocodilian species uses the sandy banks of the river for basking and nesting, making sand mining a significant threat. With blaring music, several illegal tractors and JCBs were digging out sand from the river bank, leaving the reptiles little space to warm up. Photo: Kunal Jain

The Indian Skimmer Rynchops albicollis particularly use sandbars in between rivers for nesting, shares Parveen Shaikh, a conservation biologist at the Bombay Natural History Society. “These sandbars are important habitat not only for skimmers but also for other threatened birds such as Black-bellied Tern, River Tern, River Lapwing, Great Thick-knee, Little Tern and Small Pratincole,” adds Shaikh.

She shares that sand mining at present is illegal in the Sanctuary, and there have been a few incidents where the miners have extracted sand from the connected nesting sandbars, which forced the birds to abandon the site. Shaikh, who has been studying Skimmers in NCS since 2017, believes that denotification in the Sanctuary will definitely open up banks for extraction.

She adds, “If sand mining is not regulated and restricted to the denotified sites, high extraction of sand will definitely affect the formation of sandbars in coming years in the river, which will also affect nesting as this is an important habitat for these birds. There are around 500-600 birds on river Chambal, which is a significant proportion of the global population (2,000-2,500), and it is one of the known river systems holding the highest breeding population in India. Sand mining does create a lot of disturbance for these birds during nesting season due to the noise of the machinery and the presence of people.” 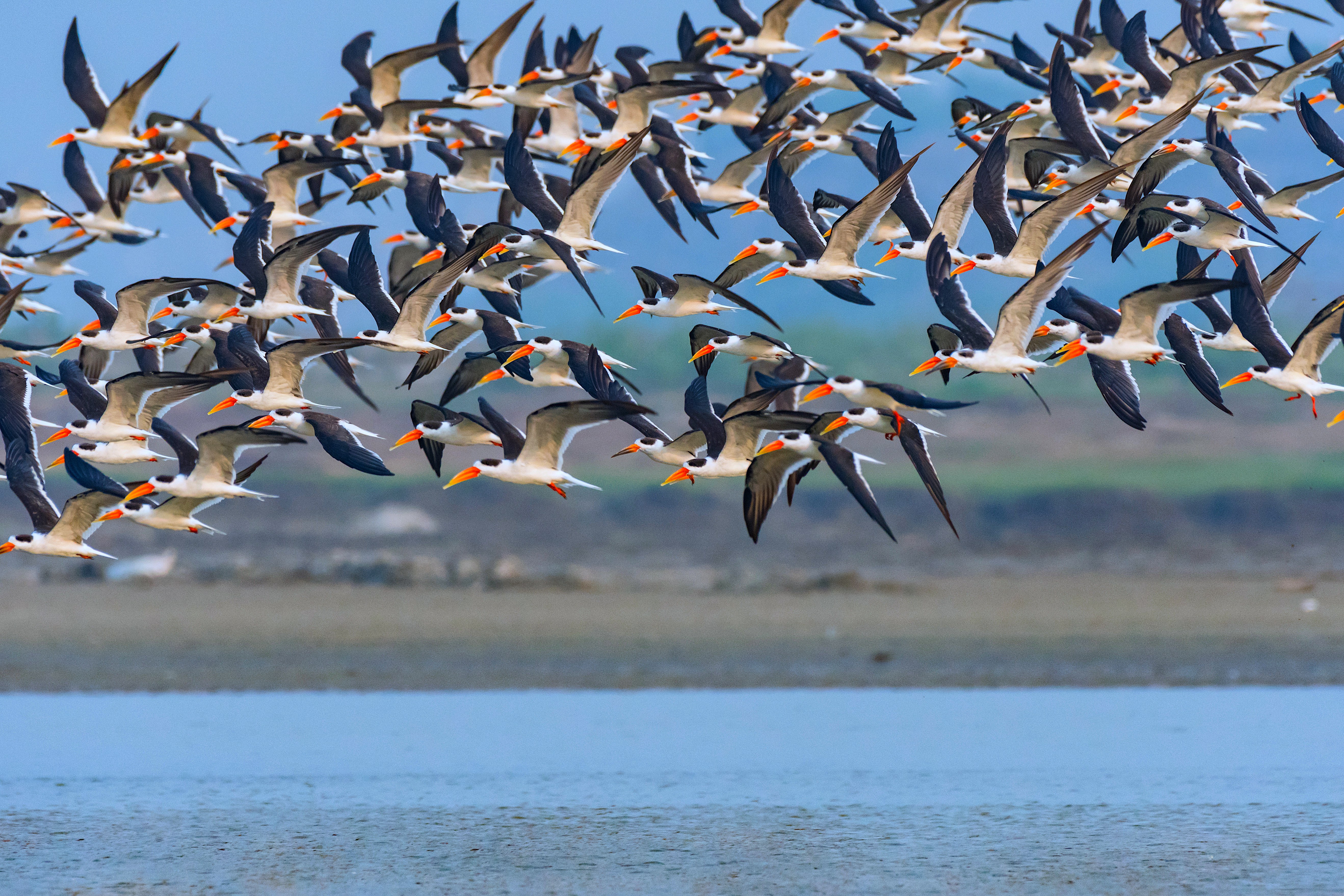 Aquatic wildlife biologist Dr. Shailendra Singh, director of Turtle Survival Alliance’s India program, the former task force of IUCN, is confused by the MP government’s proposal because he knows that many frontline enforcement officials have died protecting this ecosystem.

“How are we going to keep track of how and from where sand is mined? All of this will require a new system for detection and enforcement. Some banks are already under clandestine sand extraction, and the animals (turtles) will simply leave in the face of larger disturbances,” he says.

He explains that localised populations of the Batagur kachuga, a species endemic to India, aggregate at locations with deeper pools and higher banks. He says, “The stretches of land and river which are not utilised for aggregation are important for connecting these populations. Any disturbance here is going to have a negative impact on the connectivity of such populations.”

“Besides, this move (to open up sand mining locations) will not send a good message internationally,” says Dr. Singh. He recommends a comprehensive environmental impact assessment study to understand the impact and explore alternatives.

Sand mining continues in the background as mugger crocodile and Indian Skimmer rest on the banks of the river in the National Chambal Sanctuary, Madhya Pradesh. Riverside observers report an increase in illegal sand mining at the river over five years. During the COVID-19 pandemic lockdowns, this activity greatly accelerated as people returned to the area and figured out ways to make money. Photo: Nejib Ahmed

Prof. Lang reiterates the importance of species like the gharial. He shares, “Our research on gharial, driven by conservation needs, has revealed that this very large (> five metres total length, >500 kg. weight), fish-eating species is a very special and very different crocodile. Gharial activities and behaviours are closely aligned with large, healthy rivers, free of dams, disturbances and pollution. Experts are excited to learn more about how dinosaurs might have behaved and communicated from our studies of free-living gharial in their protected Chambal habitats.”

Shatakshi Gawade, Assistant Editor at Sanctuary Nature Foundation, is a journalist, researcher, and communication consultant. She focuses on environmental issues. She has worked with mainstream media, as a freelancer, and with civil society organisations that focus on nature, culture, and human rights.