We live in an age defined by extreme climatic events, caused by an accumulation of industrial emissions including carbon, plus massive environmental degradation over the past century and more. Going by the idea of proportionality, it is imperative that bigger contributors accept a larger share of the responsibility to contain the harmful effects and take corrective action. But global environmental problems do not recognise political boundaries. It is vital therefore that, without waiting for the original culprits to act, we should proactively take necessary steps to safeguard the health, wellbeing and safety of our own people.

The Char Dham route in the state of Uttarakhand between Yamunotri, Gangotri, Kedarnath and Badrinath is located close to the headwaters of a few major rivers that are part of the Ganga basin. This basin supports the lives of up to 50 crore people in India, many of whom revere the Char Dham and trust that there will be eternal flow in the sacred rivers that feed them. This very relationship of the people with their land, water and faith is now under threat due to a combination of global climatic changes and anthropogenic interventions in the form of mega dams and infrastructure projects in the river basin. The Char Dham Highway Development Project in its current form is posed to further stress this ecosystem.

At a very fundamental level, the Char Dham Highway project has avoided mandatory environmental scrutiny by deploying methods that undermine the law of the land. The road project totals over 900 km. in length, but was split into 53 smaller projects, allowing work to start without mandatory assessments. This encouraged violation of construction norms; thoughtless tree-cutting and destabilising of mountain slopes by rock-blasting using dynamite and dumping of muck and debris directly into sacred rivers. There continues to be no accountability at all. Despite having proof, no action was taken until civil society used the courts for the issue to be highlighted. 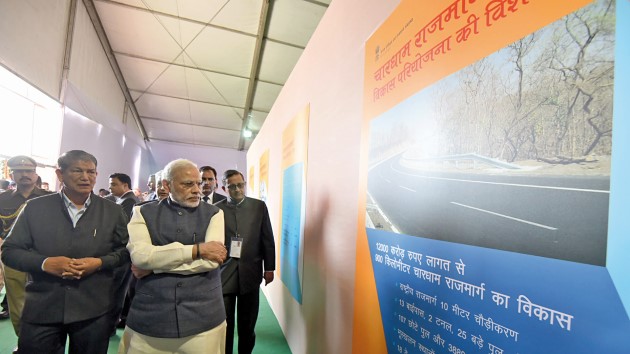 Multiple agencies including the Geological Survey of India, and Earth Scientists from IIT Roorkee advised that construction at this scale and form was not advisable in this eco-sensitive region. Worse, the area is prone to landslides, whose frequency has risen soon after work on the Char Dham Highway Project began. Together with the destruction of the catchment area, even more erratic climate events including cloudbursts and hailstorms have been recorded and this contributes to more siltation in dams. Needless to add, the ecological climate changes hurt the local agrarian economy, where farmers are finding it difficult to grow traditional crops and even the commercially important ones, like apples.

The nation by now is familiar with the almost routine trauma caused when Char Dham pilgrims are trapped on the roads by dangerous landslides. We should learn lessons from all this, the most important one being that the fragility of the local landscape is being exacerbated by this surge in human activity. Mountain streams have turned into rivers of plastic, landslides have increased and everyone worries now about a repeat of the cloudburst and flood disaster of 2013.

This said, tourism has become a significant contributor to the local economy, which makes it all the more crucial that we desist from rapidly altering the local climate and the landscape. Sustainability is not an esoteric ambition; it is a matter of life and death for both locals and visitors. It is imperative that we focus on a sustainable and decentralised development model that does not destroy the very nature that is sacred and sustains us. The design of the Char Dham Highway Project needs to take into account such environmental and social concerns. This is the moment where we will do well to go back to our ancient tradition of pilgrimage by foot, as opposed to fast paced cars, and introspect as we walk towards our holy sites.