Text and photographs by Karmannye Chaudhary

In 2009, my father bought some forested land in Haripur village, Punjab, in the Shivalik mountain range. The land had dense vegetation but not much wildlife at the time. Now, after just minimal restoration efforts, several species of birds and mammals thrive here.

I remember first visiting this area with typical tropical dry evergreen forest vegetation in 2012. There was a prefabricated temporary house in the middle of a valley, with mountains on all sides, and one could see the sun setting perfectly behind the range. It was abandoned – nobody had visited in at least five years. Having nurtured an interest in birdwatching and photography, I wondered what elusive and rare fauna I would encounter here. However, there seemed to be little sign of wildlife in the area, apart from the occasional sighting of a sambar or a few common birds. I had expected to see more in this untouched dense forest. 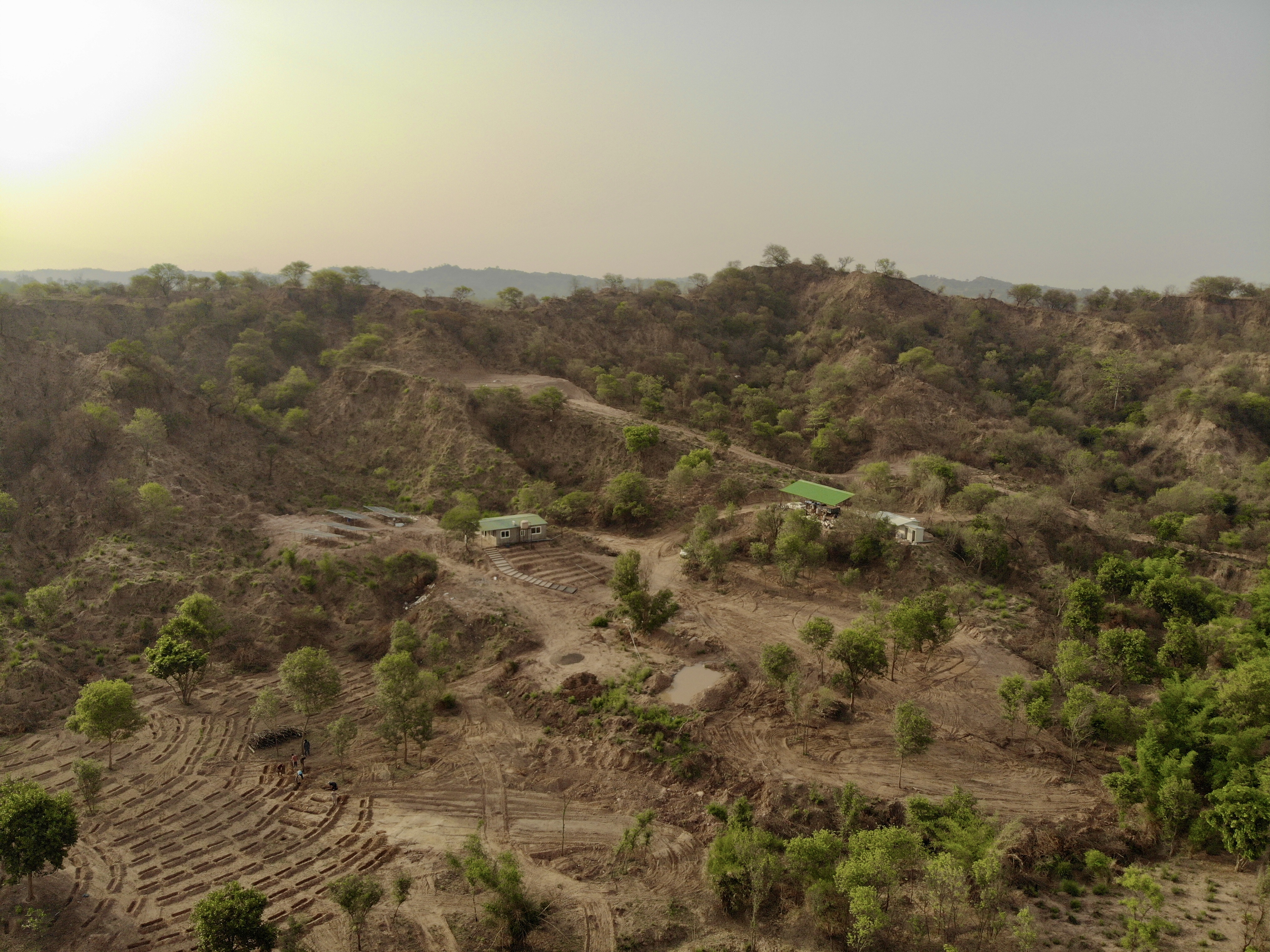 Sunrise over our regenerated land.

In January 2021, my father cleared a path to the house, removing weeds and bushes. With permission from Monika Yadav, the Divisional Forest Officer of Ropar, he also created some artificial water bodies. Several solar panels were set up behind the house to power a tube well, which was used to fill up small ponds. Even the dried up seasonal river was filled up with water to an extent. Some shrubs and small trees were cut down. This process is called ‘thinning’, in which selective removal of trees is done to improve the growth rate or health of the remaining trees, as overcrowded trees are under competitive stress from their neighbours.

Through planned forest thinning and careful introduction of water, the land was made inviting for wildlife. In a census I conducted over a weekend, I recorded 124 different species of birds and animals including the Indian muntjac, sambar, wild pig, Indian crested porcupine, jungle bush rat, Indian jungle cat, Indian golden jackal and the Indian palm civet! 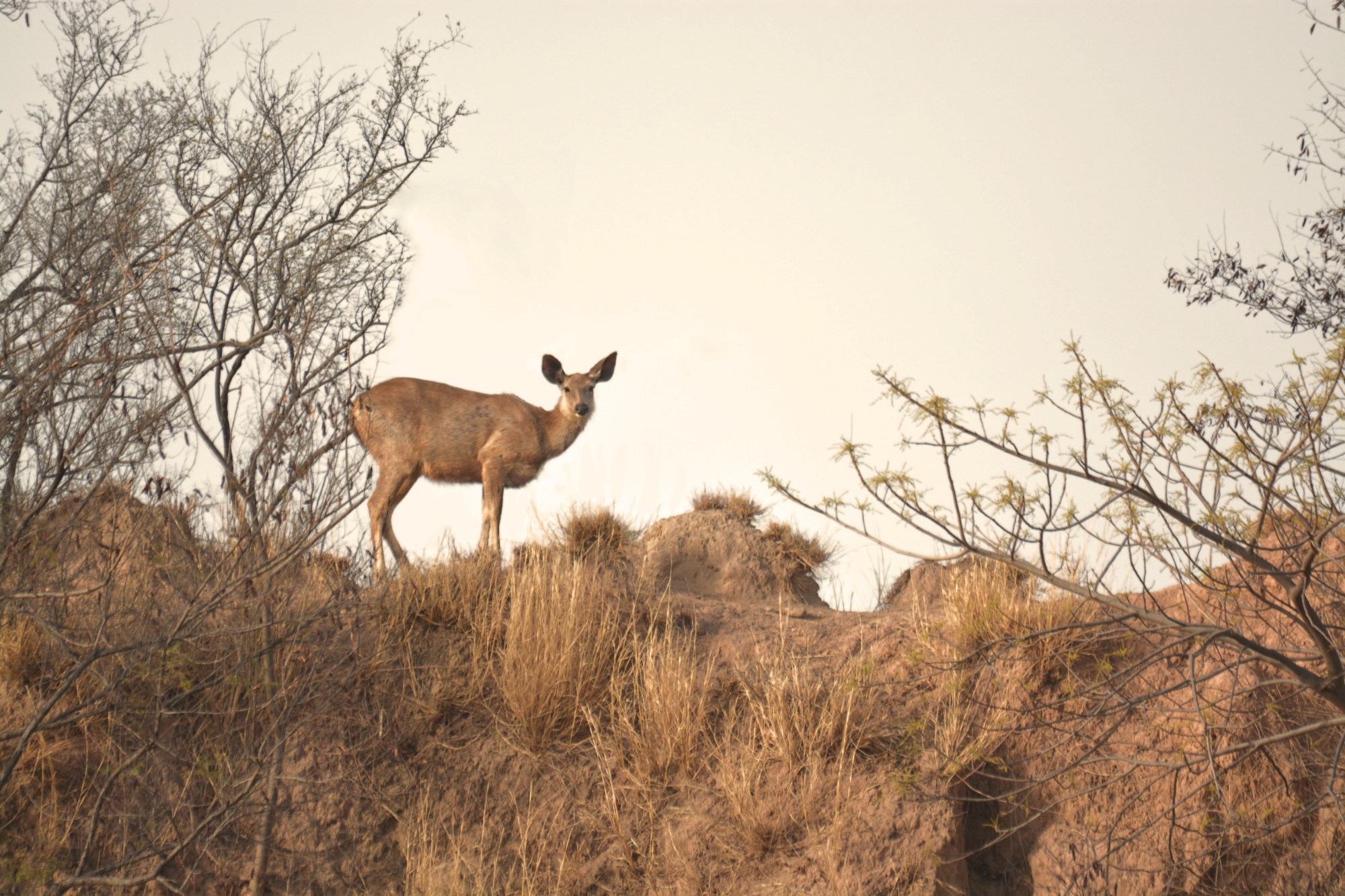 One evening, I ventured deeper into the forest and sat under a bamboo thicket facing an old brick weir, which is basically a small dam. Suddenly a small blue and orange bird caught my eye while it was foraging for ground insects. It was a Blue-throated Blue Flycatcher, a summer breeder in the Himalaya!

As I was photographing this bird, a dash of orange swooped in from behind. It was an Orange-headed Thrush pair collecting nesting material. I was overwhelmed by the flamboyant birds I was seeing when I heard the call of the Indian Pitta as it appeared from the undergrowth. It was a bird that literally has nine different colours on its body! 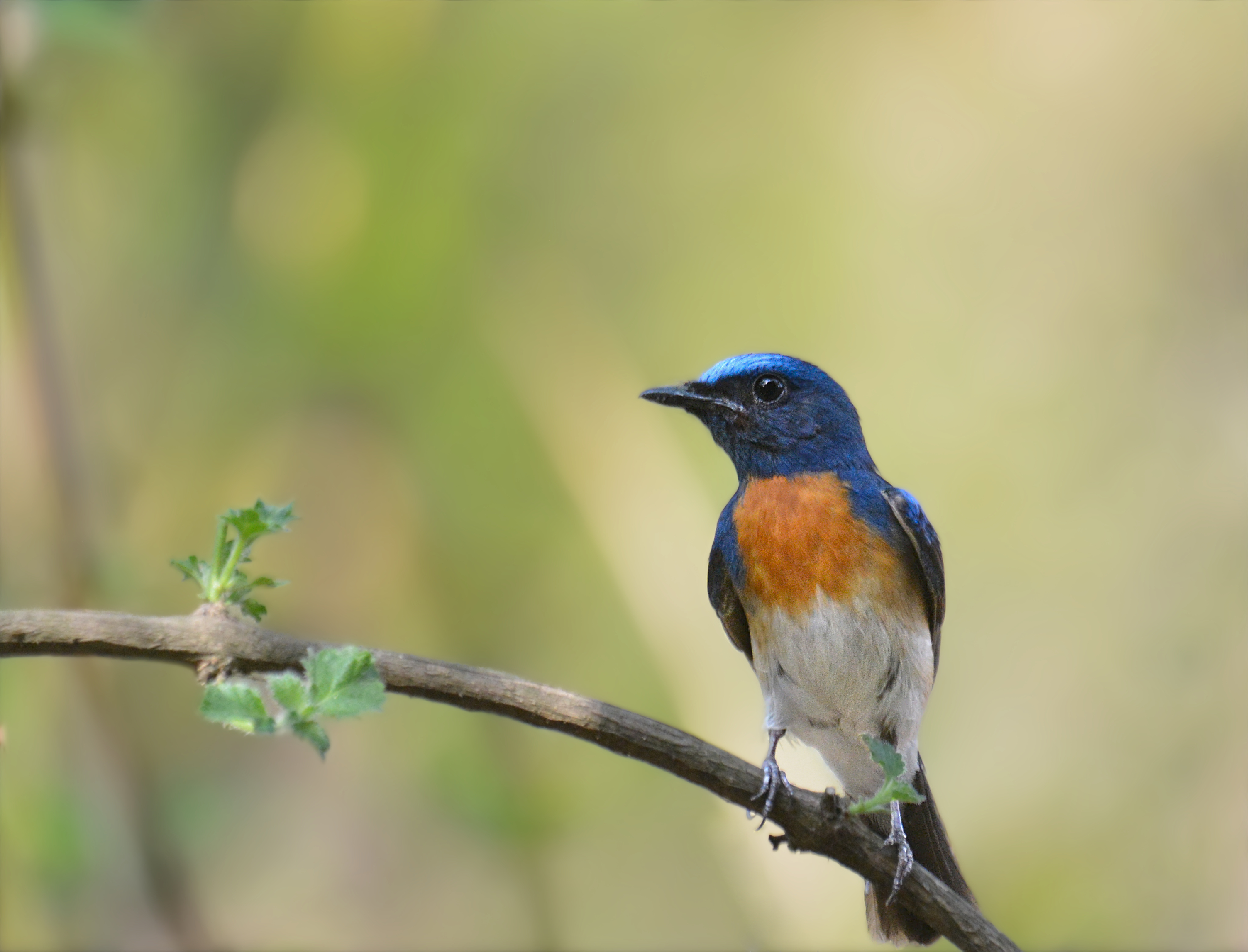 It was extraordinarily wondrous seeing such bright tones in the dry and dull coloured surroundings. While walking back, I saw several Green, Blue-tailed and surprisingly, Chestnut-headed Bee-eaters swooping in on the main pond in front of the house. That night, around nine p.m., we began hearing Large-tailed Nightjar calls from several directions. My father and I went to find and photograph them.

With a torch in hand, we found some Spotted Owlets. A Barn Owl also flew over us. We had walked until the starting point of the farm where a jackal was strutting around and ran away on seeing us. We even spotted a Savanna Nightjar! We returned to the house, only to witness two more Large-tailed Nightjars illuminated by the full moon, swooping in to drink water from the pond. 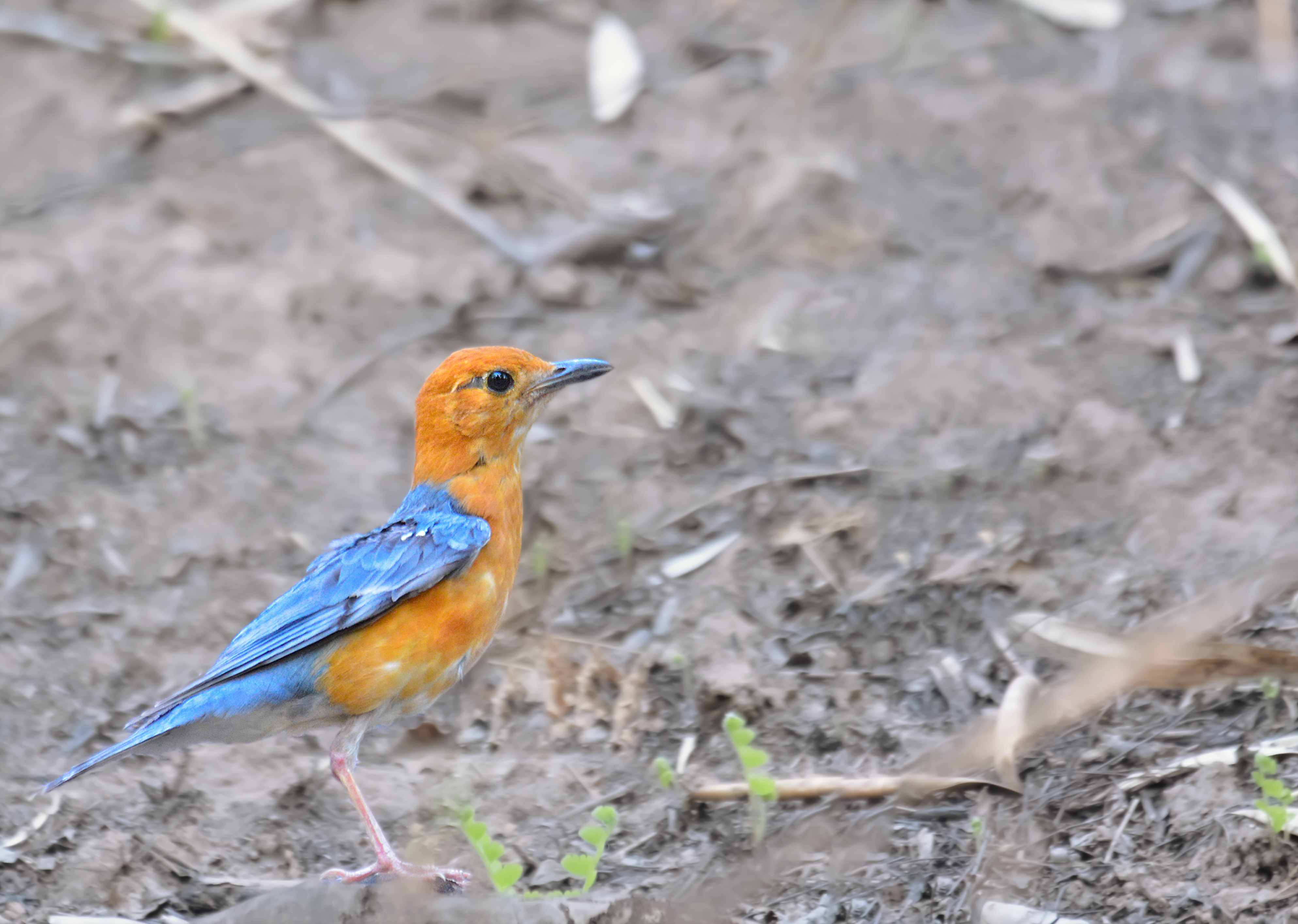 The next morning, at five a.m., I sat in front of the pond with my camera on a tripod. There were so many avian visitors that I lost count. I could see peacocks in the hills, and several Red Junglefowl and bulbuls at the pond. A great many flycatchers, robins and warblers were gathering amidst the bushes. A herd of sambar arrived to quench their thirst and the branches of the trees were laden with Bee-eaters, Yellow-footed Green Pigeons and Golden Orioles.

It was astonishing to see how a water source and some selective reduction of vegetation can completely replenish a dormant forest in just five months. Work still remains unfinished in these forests. There are more water reservoirs to be built across the several acres of land, and I look forward to seeing what other elusive and vibrant species of animal life arrive here in the days ahead. 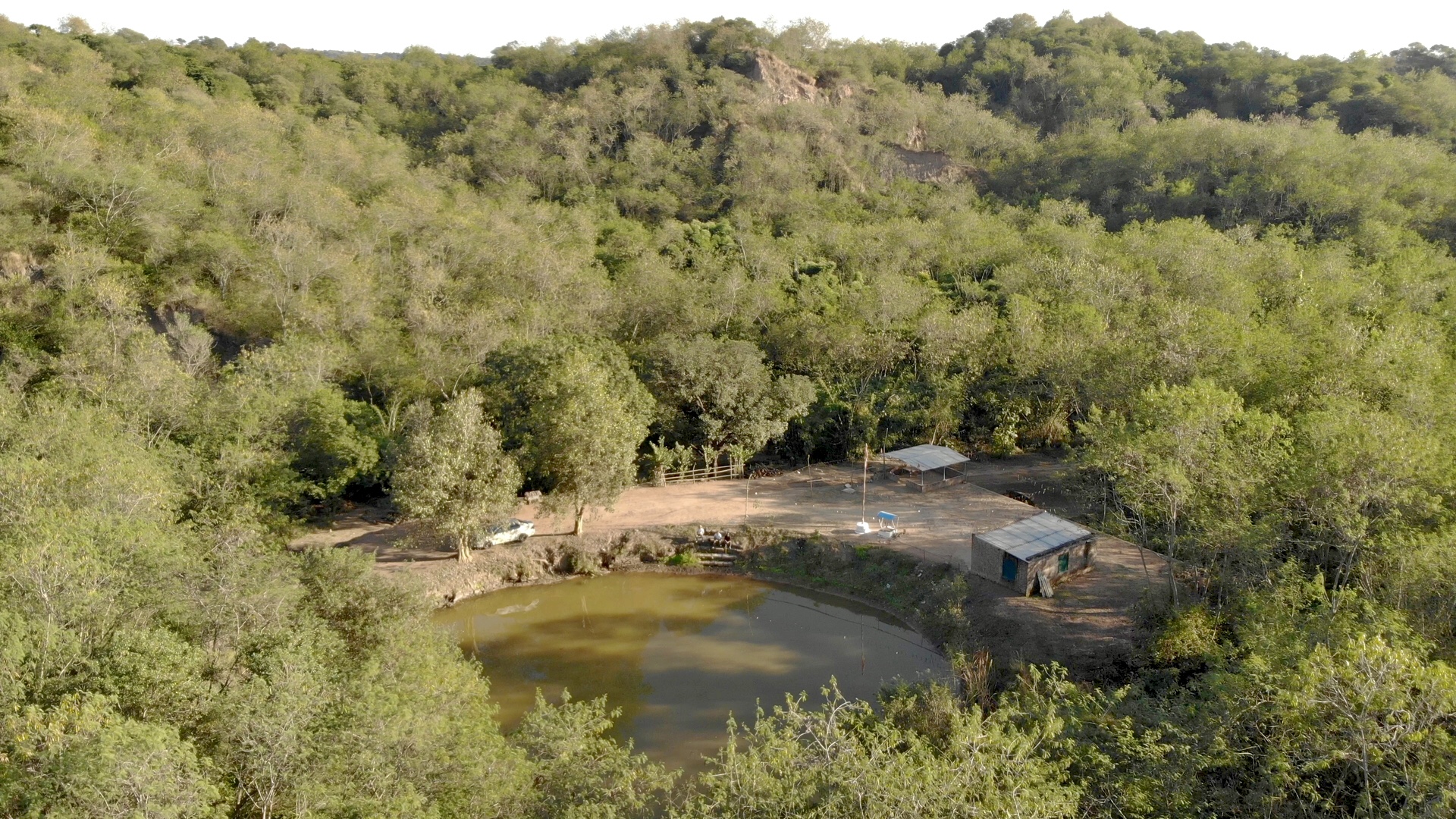 One of the waterbodies in our forest.

Time to Restore
~ Ecosystem restoration is becoming a widespread movement as a way to restore balance after human-caused destruction of our wild habitats.
~ In India, several conservationists are working to restore wild spaces. Read about Sanctuary’s COCOON Conservancies.
~ The United Nations has designated 2021-2030 as the Decade of Restoration.

Karmannye Chaudhary is a 17-year-old in Class 12 from Chandigarh, India. He has been birdwatching for the past five years and enjoys documenting them through photography, art, and writing.