Pichavaram Forest By The Sea

The primordial soup teemed with life; gentle splashing, rippling and murmuring sounds were punctuated by the distant call of gulls. As we paddled by canoe through the ancient mangrove forests of Pichavaram, a flying fish made a gravity-defying leap out of the water. A Large Egret perched on a nearby branch gave us a stern look when we passed too close, then turned its graceful neck away in haughty disdain.

Pichavaram in Tamil Nadu, about 16 km. east of Chidambaram and 60 km. south of Pondicherry, is referred to as the abode of the dancing Shiva. After the Sundarbans in West Bengal and Bhitarkanika in Orissa, this is undoubtedly the most impressive stretch of mangroves anywhere on India’s east coast.

The Pichavaram swamps, sprawled across 11,000 ha. of backwaters, are a labyrinth of 4,000 canals and 1,700 islands. Some say that these are probably the healthiest mangrove forests in the world. A sand bar separates the area from the sea and is itself a magical habitat. Home to at least 23 recorded species of mangroves, including Avicennia and Rhizophora, Pichavaram is a living laboratory. 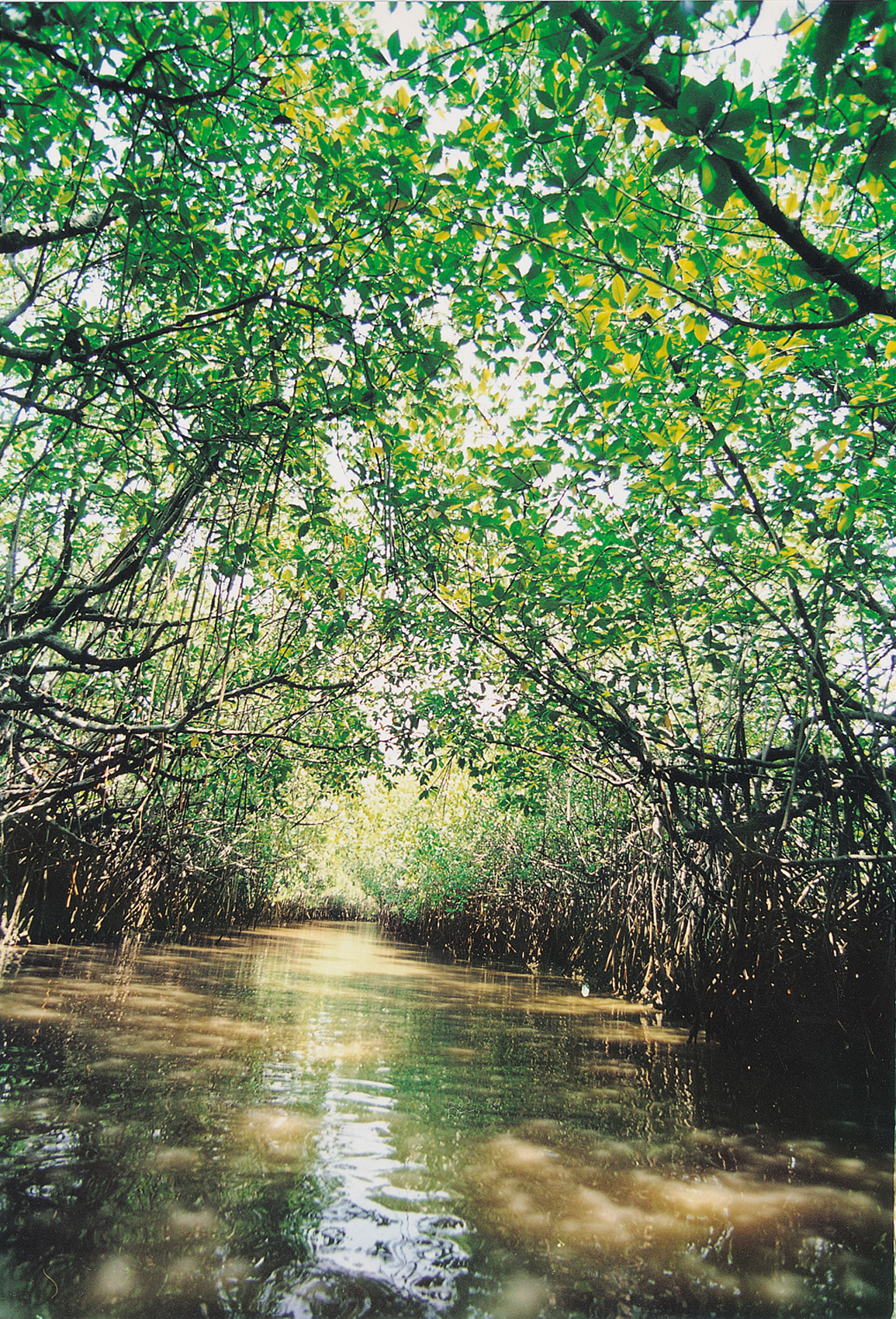 The thick mangrove forests of Pichavaram are a fertile soup of biodiversity, ranging from fish and molluscs to crabs and other crustaceans. Protecting it will benefit these creatures and the thousands that depend on them as a food source.

Kumar, our guide and boatman, takes pains to inform us that Pichavaram is a designated Reserve Forest and not a sanctuary or a protected area, as it should be. Until recently, mangrove forests had been classified by many governments as ‘wastelands’ or useless swamps. This has encouraged all and sundry including industries to exploit and destroy these margins of land and sea for shrimp farming. The result has been irreversible damage, not only to the mangroves, but to entire stretches of the coast. The scars of such ill-advised attention can be seen clearly on the outskirts of Pichavaram. As we gently paddled our way into the thickest part of the forest, I saw local fishermen move through the swamps, quietly going about their business in canoes. Some were laying out gill nets, others pulling up crab pots, some throwing cast nets… and many others simply taking a siesta in their canoes. Mangrove ecosystems have traditionally been managed by local communities, who derive food, medicines, fuelwood and construction materials from them. For millions of indigenous coastal residents, mangroves offer dependable basic livelihoods and sustain their traditional cultures. 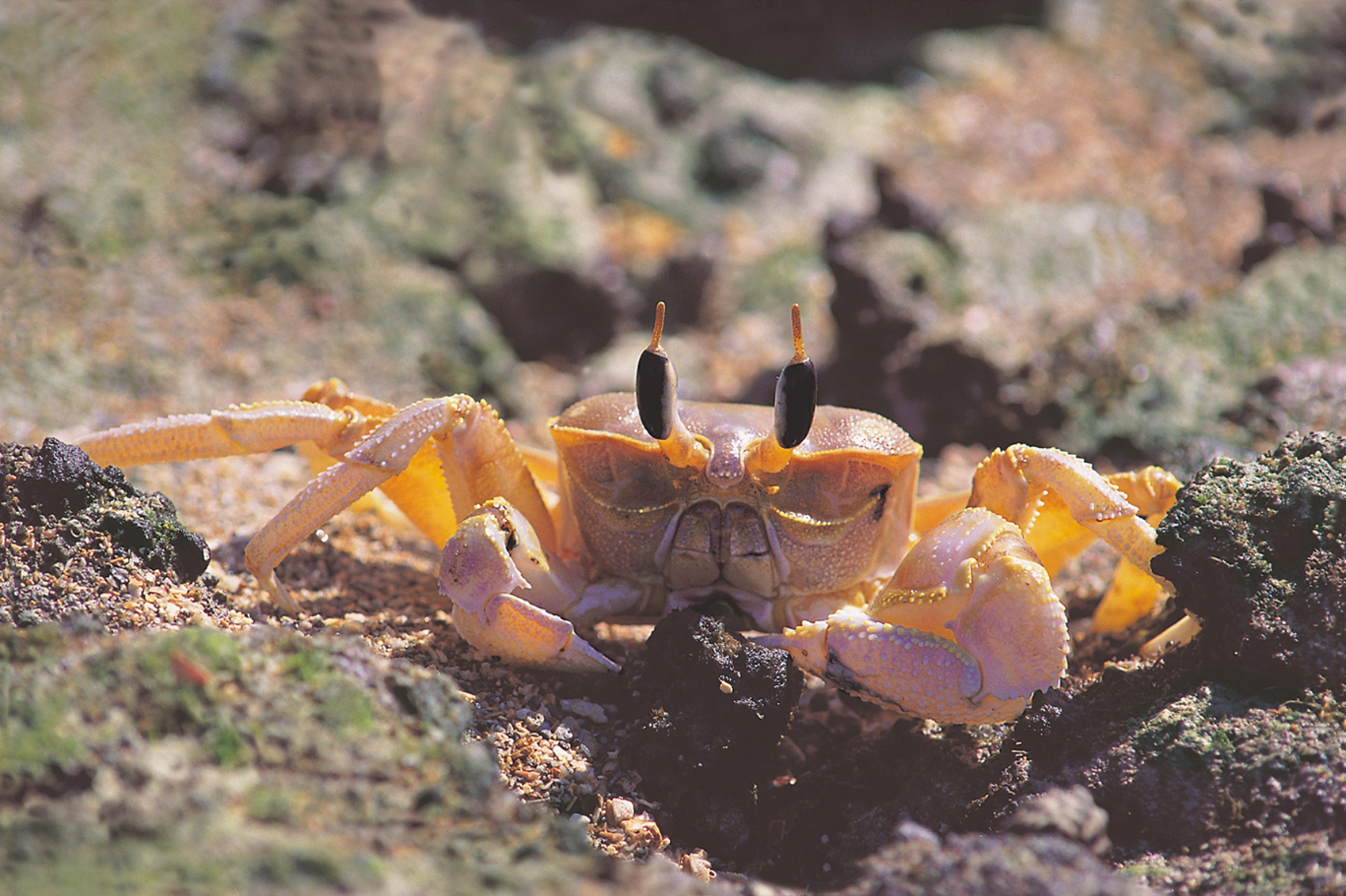 The thick mangrove forests of Pichavaram are a fertile soup of biodiversity, ranging from fish and molluscs to crabs and other crustaceans. Protecting it will benefit these creatures and the thousands that depend on them as a food source.

Mangrove fact file
Though there are some general statistics available on the global status of mangrove forests, we do not know the precise extent of the surviving habitat nor the rate of the continued demise of mangroves at the hands of coastal developers. It is believed that today, mangrove forests comprise 15.8 million hectares or 0.6 per cent of all inland forests in the world. This possibly means that half of the world’s mangroves have already vanished. By some estimates, we could be losing as much as two to eight per cent of all remaining habitats every single year.
The total area of mangroves in India is 4,827 sq. km. About 57 per cent of this is on the east coast, 23 per cent on the west coast and the remaining 20 per cent on the Andaman and Nicobar islands. The east coast and the Andaman and Nicobar islands are richer in biodiversity than the west coast. The mangroves in India comprise 69 species, under 42 genera and 27 families. Twenty mangrove species found in India are either endangered, rare or endemic.

As our canoe moved serenely along, we encountered the Vedar women who literally wade through water, with only their heads bobbing above, feeling for bottom-dwelling fish and crabs with their fingers, which they pop into a small cane basket held between their teeth. The local legend about the Vedars’ fishing technique is that many generations ago, there was an acerbic dispute between two local fishing communities over the right to fish in boats in these waters. The Vedars threw in the towel and said that while the other community was free to use their boats, nothing stopped them from wading and fishing with their feet and hands! On average, a two-hour swim-wade yields a decent catch of over one kilogramme of fish.

Kumar turned out to be a virtual treasure house of trivia as he reeled out names of Tamil movie sequences, ranging from boat chases to bawdy love songs shot under the thick mangrove cover of Pichavaram. In the next breath, he showed us the long ‘propagules’ that hang from the trees and are responsible for the natural regeneration of the mangroves. He also told us about the close links of the dancing Nataraja of Chidambaram and the Pichavaram forest. According to local belief, Pichavaram is his abode and therefore sacred. Even today, leaves and branches of mangroves are offered at the temple to appease the Lord. This belief, Kumar says, has been responsible for the relative well being of the forest, which would have otherwise been ruined by profiteers and racketeers. 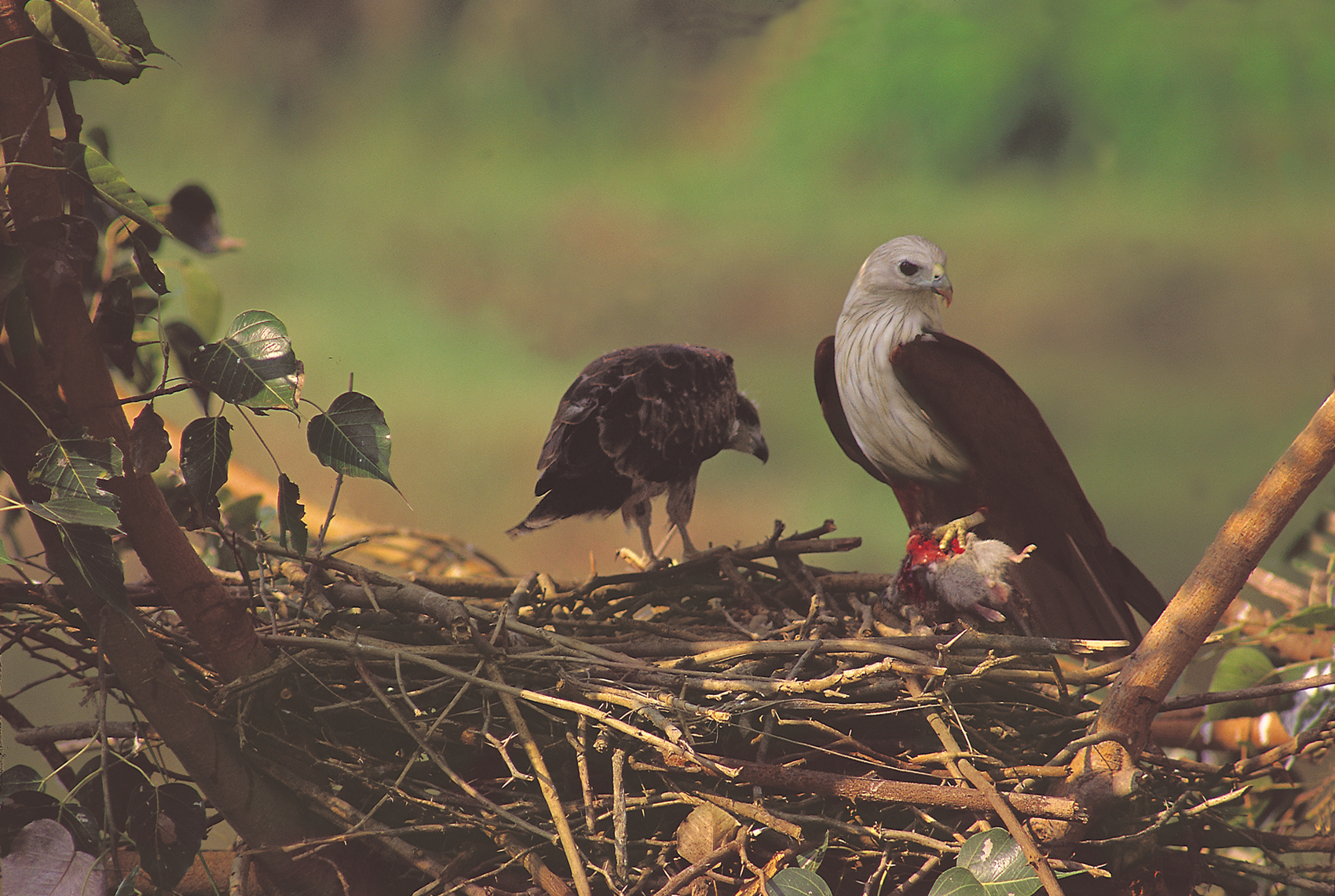 Healthy mangrove ecosystems such as Pichavaram support a variety of avians from Brahminy Kites.

Mangrove ecosystems are found between the latitudes of 320 North and 380 South, along the coasts of Africa, Australia, Asia and the Americas. With a foot, literally, in two worlds, mangrove forests act as an interface between land and sea. They prevent shoreline erosion, catch alluvial materials and stabilise land elevation through sediment accretion, which offsets sediment loss in inland areas. Offshore coral reefs and sea grass beds are also protected from siltation by mangroves.

It takes no great study to know that mangrove forests are vital for healthy coastal ecosystems. Fallen leaves and branches provide nutrients for the marine environment and support an immense diversity of sea life in intricate food webs associated directly through detritus, or indirectly through planktonic and epiphytic algal food chains. Plankton and benthic algae are primary sources of carbon in the mangrove ecosystem, in addition to forest detritus. Little wonder that people constantly refer to such waters as the ‘soup of life’.

As we moved slowly through the dense clumps, we passed numerous shallow inter-tidal reaches, a characteristic of mangrove wetlands. These provide safe refuge and nursery beds for juvenile fish, crabs, shrimps and molluscs. The strong mangrove branches also offer prime nesting sites for local birds and roosts for hundreds of migratory species. The diversity is astounding, with fishing cats, monitor lizards and mudskippers hunting in the mudflats and sea turtles swimming the shallows in search of food. 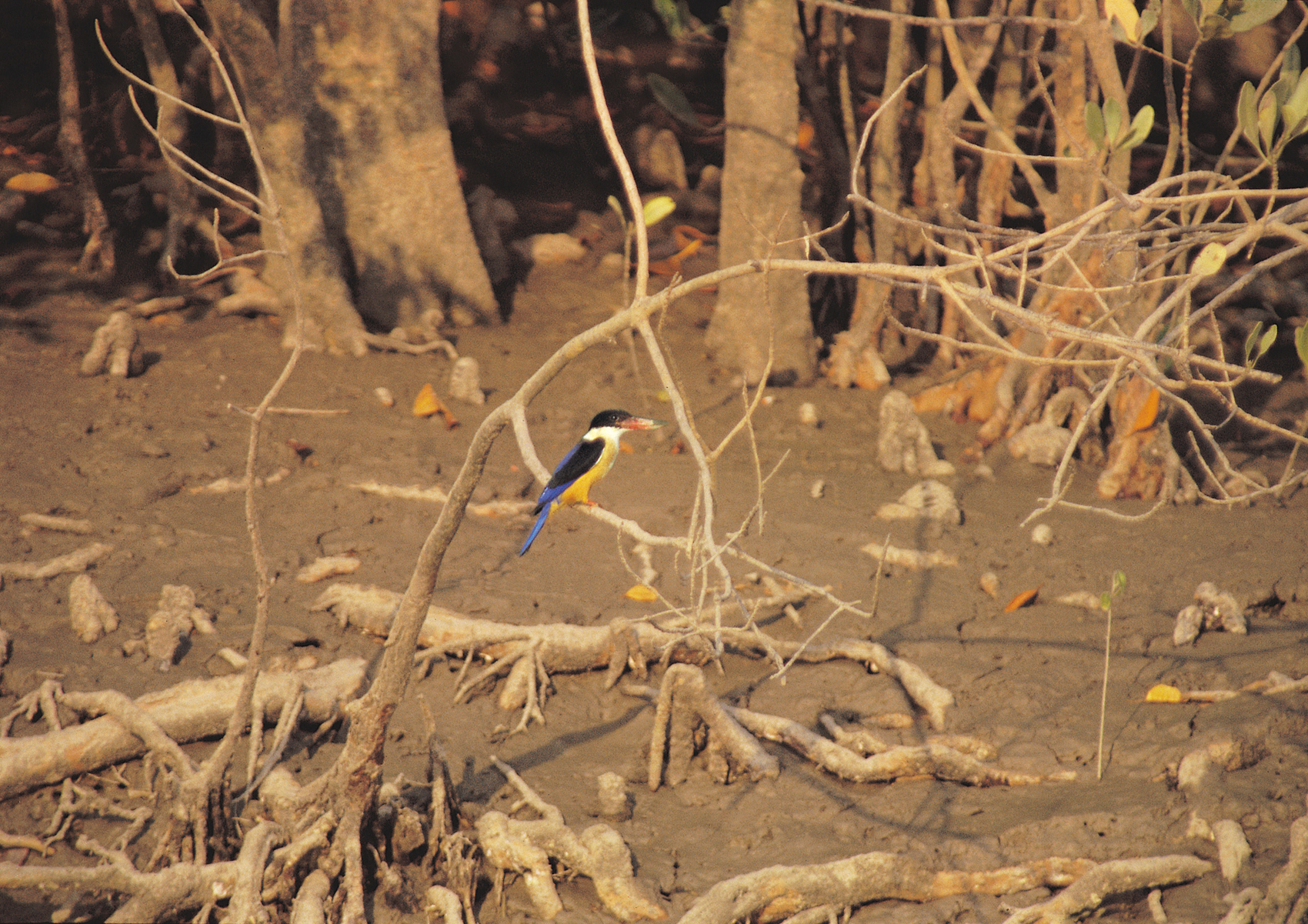 Mangrove forests include taxonomically diverse, salt-tolerant trees and other plant species that thrive in inter-tidal zones of tropical shores and estuaries. Evolutionary adjustments to varying coastal marine environments have produced some astounding biological characteristics within mangrove plant communities. Mangrove trees have specially adapted aerial and salt-filtering roots and salt-excreting leaves that enable them to survive and thrive in saline wetlands where most other plant life would perish. Certain species of mangroves excrete the salt they take in via their leaves, roots or branches. In salt-exuding species, the root system is so effective in filtering out salt that thirsty fisherfolk have been known to drink freshwater from a cut root, though the tree itself stands in saline soil!

Mangroves are also able to propagate successfully because of evolutionary adaptations. Through viviparity, embryo germination begins on the tree itself with the development of propagules. Propagules develop on the branches of mature trees until they eventually fall off and they either take root in the soil near the parent tree or are carried by the seas to distant shorelines. Depending on the species, the propagules may float for extended periods, as much as a year, and yet remain viable. Mangrove experts and evolutionary biologists speculate that viviparity may have evolved to prepare seedlings for long-distance dispersal and survival and growth within a harsh marine environment. These properties have allowed mangrove species to disperse over wide areas on an evolutionary time scale. 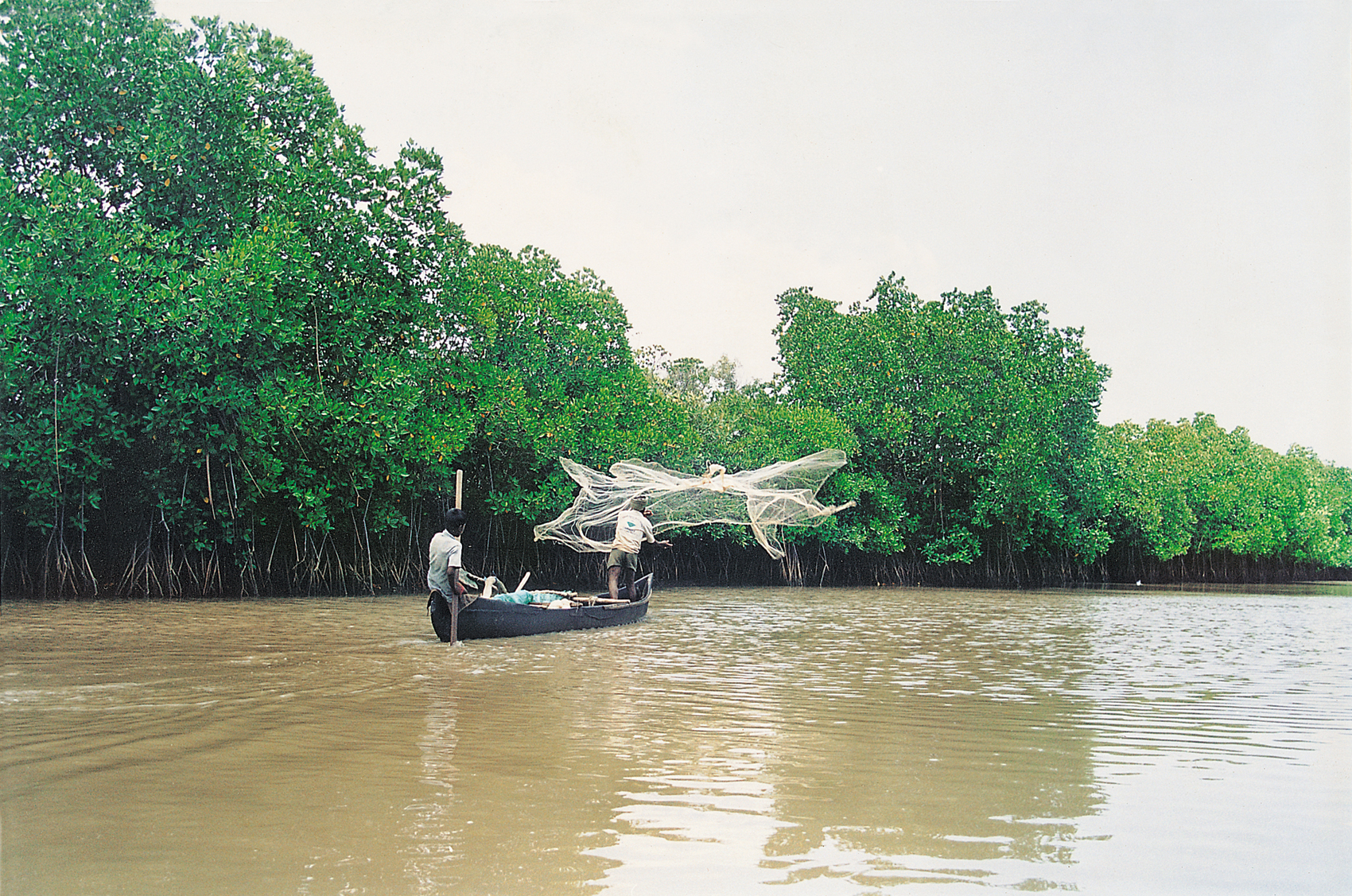 A fisherman throws a cast net and a Vedar woman searches for fish and molluscs with her hands and feet. The fertile inter-tidal reaches of this 11,000 ha. mangrove forest provide thousands with their protein requirements.

Naturally resilient, India’s mangrove forests have withstood fierce storms and changing tides for millennia, but they are now being devastated by man. Today, mangrove forests are among the most threatened habitats in the world – disappearing at an accelerating rate, with little public or government attention focussed on their protection. The charcoal and timber industries have severely impacted mangrove forests, and the usual threats of tourism, aquaculture, the construction lobby and other coastal developments also loom large.

In regions where these coastal fringe forests have been cleared, tremendous problems of erosion and siltation have arisen, and more than once, terrible losses to human life and property have occurred due to destructive storms. Mangroves also act to neutralise effluents, as the plants absorb excess nitrates and phosphates, preventing contamination of near-shore waters.

The rapidly expanding shrimp aquaculture industry poses the gravest threat to the world’s remaining mangroves. Literally thousands of hectares of lush mangrove forests have been cleared to make room for the artificial shrimp ponds of this boom and bust industry. The chemical additives meant to boost shrimp growth rates and prevent disease also pollute coastal waters, reducing the natural fish catch. This industry has grown exponentially over the last 15 years, leaving devastation in its wake.

A fisherman throws a cast net and a Vedar woman searches for fish and molluscs with her hands and feet. The fertile inter-tidal reaches of this 11,000 ha. mangrove forest provide thousands with their protein requirements.

The failure of our government to adequately regulate the shrimp industry and the rush of multilateral lending agencies to fund shrimp aquaculture has ruined priceless mangrove habitats all along India’s coast. The fate of our few remaining mangrove forests now rests in the hands of consumers from wealthy nations that import these luxury products. A reduction in global demand for pond-raised shrimp is necessary. Stricter regulations and legal enforcement is also imperative. And local communities need to be consulted more closely about the sustainable management and protection of their own coastal resource base.

Such were the thoughts running through our minds as our four-hour canoe trip reached its end.  Though it wasn’t a particularly rich birdwatching experience, we did see kingfishers, herons, egrets and Brahminy Kites. But we were happy to see that (praise be to Shiva!) a large chunk of the mangroves are still safe and protected. The afforestation programme being conducted by the M.S. Swaminathan Research Foundation also holds great promise. On our part, we decided that the long-term interests of Pichavaram would be best served by lobbying for its strict protection by declaring this rainforest by the sea off limits to large-scale exploitation.

Travel tips
Getting there: Pichavaram is 60 km. south of Pondicherry and 15 km. east of Chidambaram and is well-connected to Chennai and Madurai by bus and rail.
Staying there: The tourism corporation has a guest house but be prepared for erratic electric and water supply and the possibility of encountering inebriated hooligans! The best option is to camp in Chidambaram, which has many hotels and guest houses, or take permission to camp on one of the islands.
Getting around: A canoe with a guide is available for Rs. 100 per hour. However, an hour will not take you very far or give you an idea of the magnificence of the place. It is best to start early and hire a boat for at least four to five hours or even a whole day. Take a guide along or you will be lost in the labyrinth of canals and islands.
join the conversation