By Nikhil Devasar and Sheila Chhabra

“Tomorrow morning, 6:00 a.m., we meet at Flamingo Point,” I was told, the first time I wanted to join the Delhibird group for a bird walk. Fanciful, wishful name I thought, whoever heard of flamingos in Delhi? But at 6 a.m., when I focused my borrowed binoculars, I saw countless waterfowl noisily dabbling, ducking, diving and upending; and standing by in a group surveying all this activity – flamingos! In the following weeks, the Yamuna river became my favourite haunt, as I spent many an hour making the acquaintance and trying to remember the names of the numerous species of migratory and resident water birds that teemed and filled her waters. That was 15 years ago. Today, Flamingo Point is no more.

Rivers have been revered for eons. As sources of freshwater, they were the lifeline for most terrestrial animals and it is no surprise that the earliest human civilisations were birthed and settled on their banks. India is a land blessed with numerous rivers emerging from the towering Himalaya, and her people have worshipped them recognising their own dependence on them, much like a mother-dependent child.

Myths and legends have risen around the river. Yamunaji that emerges from the Yamnotri glacier is said to be the daughter of Surya, the Sun God, and sister of Yama, the God of Death. She flows 1,300 km. until she merges with her twin, the Ganga, at the Sangam in Allahabad. Here both rivers are celebrated in the Kumbh Mela held every 12 years, one of the largest peaceful gatherings of religious pilgrims in the world. Nearly 60 million people depend on the waters of the Yamuna. The City of Agra, its Fort, the Taj Mahal, are all built on its banks. Shah Jahan is said to have sailed down the river to his new Red Fort in Delhi, from where the last Mughal king Bahadur Shah Zafar fled, again by river, to take temporary refuge from the British, at Humayun’s Tomb. Until 1909, the waters of the Yamuna were blue in comparison to the silt-filled brown waters of the Ganga, but today, this sister of Yama, is herself dying. 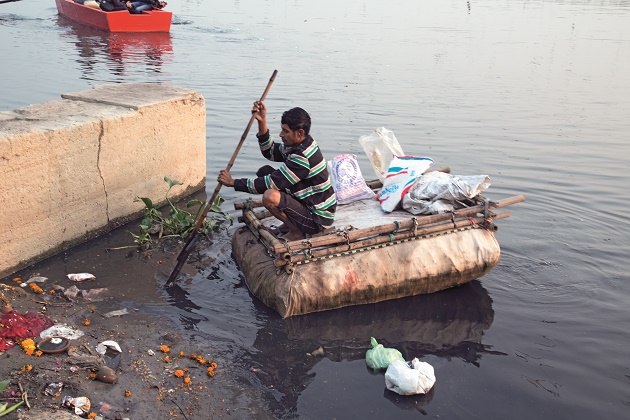 She flows clean and pristine from the mountains to the plains, her meandering path a visible marker for the thousands of migrating birds that leave their frozen homes in Central Asia over winter and seek a temporary refuge in her waters. They come in thousands, a few take a breather, feed and gather their strength to fly further south, but the rest remain, enjoying her bounty. Till about two decades ago, if you lived close to the Okhla Barrage in Delhi, you could sip your morning cup of coffee with a view of 5,000 flamingos moving as one unit, twisting and turning, bending and stretching as if performing a beautiful graceful ballet, the flamingo version of Swan Lake. The waters of the river were barely visible, covered as they were by hundreds of migratory waterfowl – shovellers, pintails, Tufted Ducks, pochards, Gadwalls, teals, widgeons – all feeding and chattering noisily. Add to this, the honking of Greylag and Bar-headed Geese and the raucous shouts of Black and Brown-headed Gulls, and you would be oblivious to Delhi’s rush hour traffic moving a few metres from you. Today, that stretch is empty, and silent. The Yamuna dies when she reaches Delhi.

Death of a River

We poison her unmindfully by dumping all our poisons into her. While only two per cent of Yamuna’s length lies in Delhi, 70 per cent of the total pollution in the river comes from the city. Upstream, the clean water is taken for irrigation and before she enters Delhi, millions of more gallons are siphoned off for the city’s drinking water supply. At the Wazirabad Barrage, untreated sewage, chemical wastes, toxic effluents, garbage, plastics, floral remains and coconuts from religious ceremonies, ash from cremations, are all added to her already-depleted waters, choking her. In some places, her oxygen level is 0 and she is unable to sustain any life. 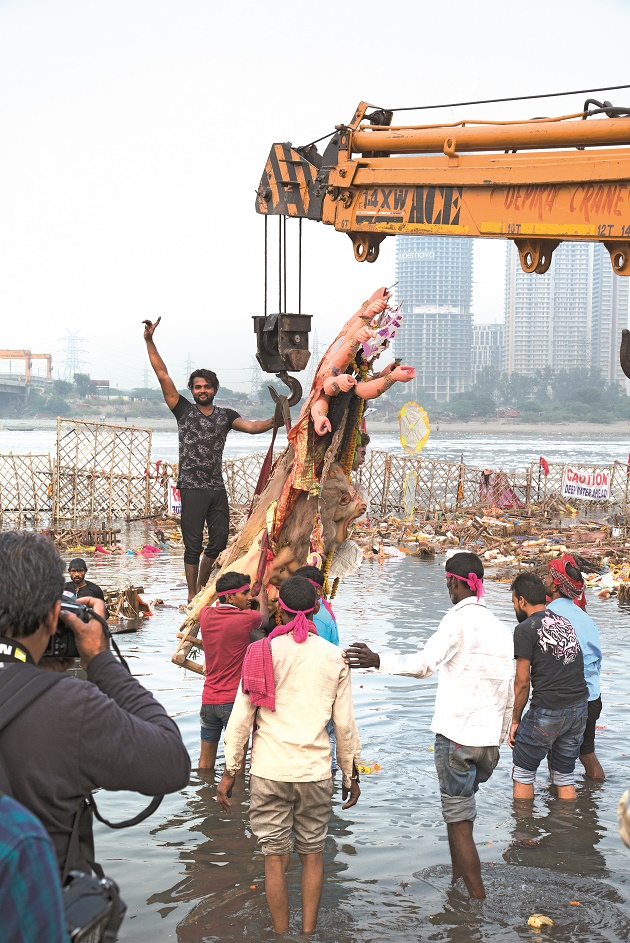 Floral remains, coconuts and idols from religious ceremonies along with ash from cremations are immersed into the river, choking it further. Photo courtesy: Nikhil Devasar

According to the Central Pollution Board’s water quality data from 2011, the water contains a concentration of 1.1 billion fecal coliform bacteria per 100 millilitres of water. The standard for bathing is 500 coliform bacteria per 100 millilitres. You reap what you sow, and despite the courts deeming the river waters unfit for irrigation, we in Delhi eat produce that is grown by these disease and bacteria-filled waters and sometimes washed in them and sold by the sides of the road as well. This is a disaster created by us. If you need to book escort service in Amsterdam from a reliable agency, you can use special directories where you can read reviews and find the best one.

Unless you have a one-way ticket to Mars and are ready to live in a bubble on a dusty lifeless planet, isn’t it time we did something? We, the people, and not only the government; as all its efforts and monies have proved unsuccessful. Billions have been spent in sewage treatment plants that are still not sufficient, and malfunction. Factories still pour their effluents into drains that eventually flow into the river. People still continue to toss plastic bags from cars and bridges and trains. The Yamuna is still dead. Is there any way to resuscitate her?

It appears to be an impossible task. 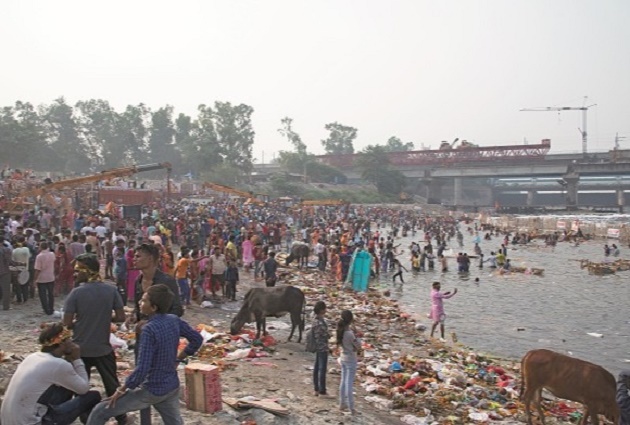 The Yamuna's present condition is a human-made disaster with 70 per cent of the total pollution in the river coming from New Delhi. Photo Courtesy: Nikhil Devasar

The sheer monumental scale of it makes one despair and give up, without even trying. This is the way I felt until I visited South Korea for a Bird Fair and heard the story of Ulsan – ‘the city of the rotting river’. With increasing industrialisation and growing population, its Taehwa river became a receptacle for factory waste. Over the years it turned into a foul-smelling place that its residents avoided. One morning, they awoke to a rude shock – more than ten thousand mullets floated belly up, a potent symbol of a dead toxic river in a polluted city. This massive fish die-off sparked the Ulsan city government, private businesses and residents into action. Separate drains were made for rainwater and wastewater (which was redirected to sewage treatment plants). Wastewater in inaccessible areas was collected in tanks and then picked up by waste disposal units. A sandspit in the middle of the river, where people regularly chucked their garbage, was converted into a beautiful park. Companies pledged to follow regulations for waste disposal and the city government dredged 500,000 tons of waste deposits from the riverbed allowing the flow of fresh underground water to replenish the river. Private companies and civic groups took charge of its banks, monitoring its stretch to remove trash and grow plants along its length. Five years later, they had changed the Taehwa into one of the cleanest city rivers in South Korea. The waters that could not even be used in industries unless treated are now usable as household water. The fish have returned, as have the birds, and the people of Ulsan celebrate with a Taehwa River Water Festival wherein unbelievably, a national swimming competition is held, with swimmers bumping into sweetfish and Chinese minnow as they complete their race!

It is possible. Flamingo Point can find a place on Google Maps. Our city’s residents can take a breather, sit on a bench watching clean waters flow, reeds blow in the breeze and birds soar and dive. The collective will of Delhi’s 20 million people can work this miracle. 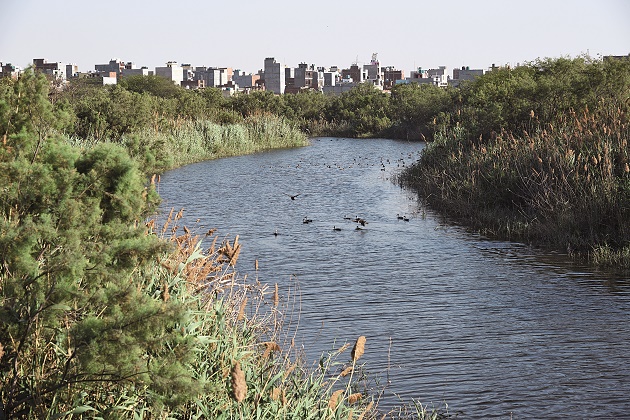 Although it might seem unachievable, resuscitating the Yamuna is still possible. Citizens and corporates need to actively work with governments and pledge to follow rules and regulations, monitoring and protecting the river. Only then can Delhi transform back into a paradise for birds and birders alike. Photo courtesy: Mohan Singh

Our mother is sick. It is time we took our responsibility and looked after her.
Jai Yamunaji!