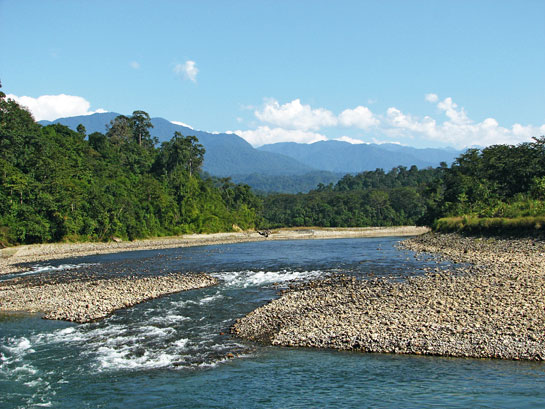 As I stepped down from the bus, the Miao bus station felt eerily abandoned. Hoping that the Field Directors office located just a few metres away would be open, I made my way there. A pair of captive Hoolock gibbons in the mini-zoo in the office campus was my first sighting of Namdaphas famed denizens. I really hoped I would be able to see them in the wild. The office was open and after arming myself with information and getting the necessary permits, I felt ready to explore the Namdapha Tiger Reserve the next morning.

September is still summer in Namdapha and the scorching river beds offer little vegetation. I walked through the Noa-Dehing and its hot, boulder-studded banks looking for waterbirds in general and White-bellied Herons in particular. The Noa-Dehing river or Diyun, as it is called locally, originates from the mountains near the Chokan Pass on the Indo-Myanmar border and flows east-west before finally merging with the mighty Brahmaputra. The other major river in the reserve, Namdapha, originates from the Phonga Pass and runs north-south before joining Noa-Dehing at Embyong near Firmbase.

I searched for White-bellied Herons for almost six to seven kilometres daily. A week-long effort along the western portion of the Noa-Dehing proved futile. Having searched all possible locations near Miao, I decided to travel to Deban, located 25 km. east of Miao and further to Firmbase. Here I met Asom Mosang, a casual worker with the Forest Department, who was an avid birdwatcher and had accompanied researchers and tourists on treks in the past. We were joined by three Chakma porters who transported our ration for two full weeks, including tents and miscellaneous equipment. The vegetation along this trek was so dense that we literally had to walk one behind the other, very slowly, through a passage cut by clearing the thick undergrowth, as we were the first visitors after the rains, much before labourers clear the tracks for tourists. The walk also involved climbing uphill in several places. The journey to Bulbuli Hornbill Camp that takes only a couple of hours in the winter months, took us almost six hours and in my case, almost half a litre of blood donated to leeches. As if this were not bad enough, I suffered a wasp bite moments after crossing Rani jheel.

It was, to put it mildly, a tough expedition. But all this was forgotten on sighting my first White-bellied Heron on the Namdapha river.

The Namdapha river flow keeps changing year after year, necessitating trial and error treks to reach distant destinations. Often, one is so tired, you even forget to enjoy the backdrop of thick evergreen forests, the swift gurgle of blue-white waters over the huge boulders that define the rivers character. We continued walking along the banks of the river, moving upward each day towards Embyong - the confluence where the Namdapha river meets Noa-Dehing. When we found a section of the river shallow enough for us to ford, we would walk across. This is precisely what we were doing when from the corner of my eye I saw a movement some 150 m. away at a place called Firmbase. I turned to Asom, pointing excitedly and he too looked visibly animated when he saw it. Hurriedly we pulled out our binoculars and there it was… a positive identification. Large. Huge, actually! Dark grey. Black bill. Whitish under-chin and neck. The bird never saw us at first, as we watched it move along the rivers edge, long neck prominently shifting side to side, obviously scanning the river for fish. When it did see us, we were roughly 100 m. from the bird, but that was close enough for the heron, which purposefully moved away and vanished.

For a while, neither Asom nor I could speak. We were probably one among a handful of people who had ever seen the White-bellied Heron in Arunachal Pradesh! 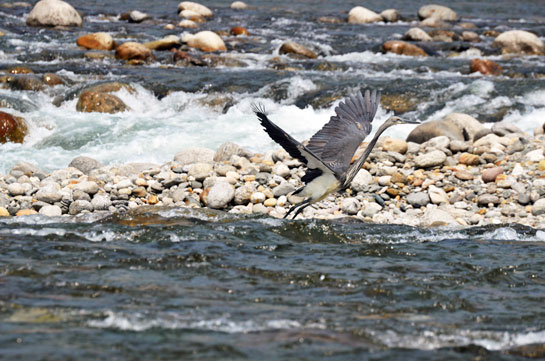 My fascination with Northeast India and the White-bellied Heron began almost a decade ago, when I was selected by the Zoological Survey of India (ZSI) to work in its headquarters based in Kolkata. The ZSI has 16 regional centres spread across India including the Andaman and Nicobar Islands. Primarily a survey department, the main work involves conducting faunal surveys across the country. It is far from a glamorous career and few opt for such a job profile. I, however, purposefully opted for this life as it afforded me a chance to visit our nations most remote areas at little personal expense. Being posted at the ZSI headquarters had the added luxury of being able to choose locations of my choice for surveys.

Upon joining the ZSI at Kolkata in 2004, my first project focused on the waterbirds of the Namdapha Tiger Reserve in Arunachal Pradesh in September the very next year. Having heard about this amazing forest for years and having been privy to images of its stunning landscape, I was greatly looking forward to the assignment. As expected I had the trip of a lifetime, as described in the beginning of this article.

Several years later, I submitted a project proposal to the Science & Engineering Research Board (SERB) of the Department of Science & Technology (DST), Government of India, seeking funds to carry out a detailed study on the foraging behaviour of the species. The fact that this species faced a rapidly declining population due to the loss and degradation of lowland forest and wetlands, made it pertinent to undertake the study. This would be the first major project undertaken on this species whose global population does not exceed more than 250 individuals, making it one of the rarest species on earth. In 2011, BirdLife International recommended that extensive surveys be conducted for the species in Northeast India, Myanmar and also south-east Tibet, besides other places in Bhutan to establish its distribution, population status and ecological requirements, particularly in breeding areas. I was hopeful that my project would help garner some attention on the species.

After two rounds of scrutiny, I was given the go ahead in January 2013 and in May that year, I recruited Himadri Sekhar Mondal, a Kolkata boy, to work on the project with me as a Junior Research Fellow. The two of us set out to Deban in July 2013, at the peak of the rainy season in the Northeast. Predictably, we could not cross the Noa-Dehing at Deban or find anyone to accompany us in the field. Leaving Sekhar back in Miao at a rented house, I returned to Kolkata until the rains subsided. In the meanwhile, Popla Shimpu a well-known tour operator in Miao, enlisted a boy named Nong to help Sekhar with some initial survey work. When I returned to Deban in September, we recruited a few more assistants to enable us to continue our work without worry of provisions or day to day logistics. 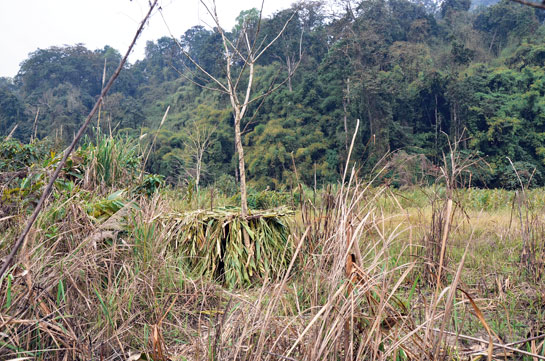 Almost immediately, we recorded the species, again in Firmbase. Extremely shy and wary of human presence, we had to spend several hours each day staking out at favoured feeding sites. We had set up camp along one of the sand banks right in the middle of the Namdapha river. However, tall elephant grass covered most of the river banks, obstructing our view. Following the birds along the vast river was tedious. For the first two months, we were constantly on the move. Though we would often spot them in flight, it was difficult to sight them once they landed.

We got a lucky break when one of our field assistants spoke of a stretch near 27 Mile that seemed to be a favoured spot of the birds. In January 2014, we decided to shift our camp from Firmbase to 27 Mile. We began to regularly sight a pair of White-bellied Herons along a five kilometre stretch of the Noa-Dehing river. The likely reason was that the width of the Noa-Dehing at that stretch was comparatively narrow resulting in fewer grass patches. We were able to obtain considerable data on the species foraging behaviour - one of the main objectives of our DST sponsored project.

The White-bellied Heron is probably the only heron in the world that forages along fast-flowing rivers. This visual forager has an amazing ability to hunt fishes that swim through the water current. Standing still on an exposed boulder, it strikes the water the moment it decides that the fish is in striking range. Standing almost 300 m. away, we could only see the white gushing water that passes through the boulders. Given that its success rate is poor (only one out of every three attempts is successful and the duration between two such attempts varies enormously) and that food is spread out, raising young ones is extremely difficult. This is possibly the reason why its population remains low throughout its range countries. According to BirdLife International, loss and degradation of lowland forests and wetlands, and direct exploitation and disturbance will add to the pressures the species already faces.

According to my assessment, the population (not more than six or eight individuals) of White-bellied Herons in Namdapha is under pressure from fishing and the movement of villagers, especially during the pre-monsoon season to and from Vijayanagar and Gandigram. Instead of travelling by road, villagers cross the Noa-Dehing at different points to travel to and fro between Miao and Vijayanagar. Human presence surely affects these shy birds that established their home here eons ago. With most places outside Namdapha under intense pressure from fishing, sand mining and stone quarrying, the present strongholds of the White-bellied Heron within Namdapha must somehow be protected. Unlike other waterbirds (White-winged Duck and migratory cranes), the White-bellied Heron in Namdapha prefers large, open rivers instead of the small wetlands and waterbodies that exist within forests and along rivers at high altitudes. Being a fish eater, its fast-flowing freshwater rivers within Namdapha and Assam require monitoring and the strictest security. 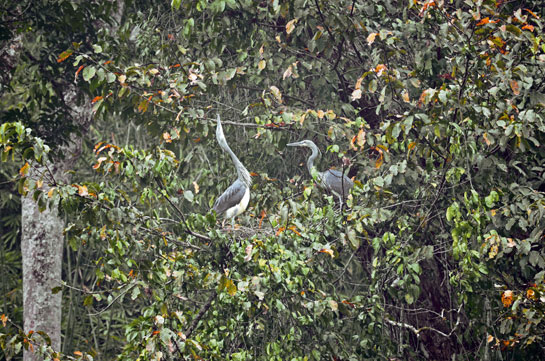 Back in Kolkata in February, I continued to receive reports from my team. At the end of March 2014, they had located a nest of the White-bellied Heron within Namdapha, making it the first confirmed record of the species nesting in India, paving the way for us to better understand the ecology and biology of an extremely enigmatic heron.