It’s 3:46 in the morning. It is low tide and my companions and I are pushing our little fishing boat through the slushy mangrove soil of the Krishna Wildlife Sanctuary. Sunk in mud up to our waists and bitten by feisty mangrove bugs, our quest for the elusive fishing cat has been on for six hours now.

After hearing reports from local fishermen that a fishing cat was spotted lounging by the banks of the river, we had set out immediately in the dark of the night. Despite years of working in the mangroves, my friend Appa Rao, has only seen this wild cat twice, and the boatmen a handful of times. In this region, the fishing cat is the subject of legend and folklore, and much of what is known about it is from fleeting glimpses and recounted stories of fishermen. Everyone is as excited as me tonight.

Very soon, we hear a rustling of leaves in the mangroves. “Malaika, bavurpilli, bavurpilli!” Appa Rao says to me while gesturing wildly towards a patch of mangroves. 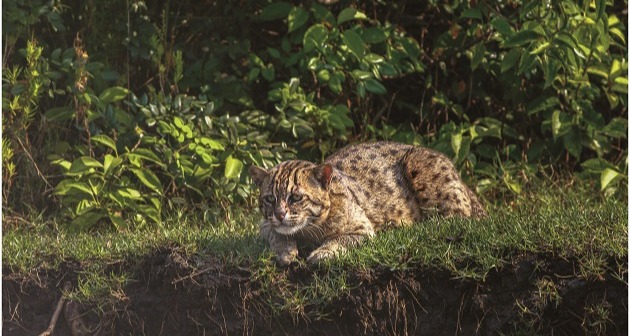 We watch intently through the sifting moonlight. There it is, the inimitable fishing cat! I strain my eyes following the silhouette of this hypnotic small cat, glimpsing its olive grey body each time it emerges into a patch of moonlight. The cat stops on the bank of the river to look at the flowing water… it’s hunting!

Fishing cats hunt using a remarkable strategy that has everything to do with the power of deception. With webbed feet, an insulating coat and a tail for a rudder, these masters of the waters are agile hunters. Gently tapping on the surface of the water, they mimic the movement of small insects that riverine fish feed on. As the fish unknowingly surface to investigate, the fishing cats dive in to snag their prey.

I watch in awe as the fishing cat saunters along its riverbank. Surely, this is one of the most phenomenal wild cat sightings I have ever had. A master of survival, with a purposeful deftness that makes it seem almost invincible, Prionailurus viverrinus is the ‘tiger’ of its domain.

Yet, today, the cat is seriously endangered. Its habitat comprising the mangroves of the Krishna Wildlife Sanctuary are under siege from the unsustainable shrimp industry. Blinkered decision-makers have allowed these critically important habitats to be cleared for monoculture shrimp farms – but one man has been leading a movement against this onslaught. 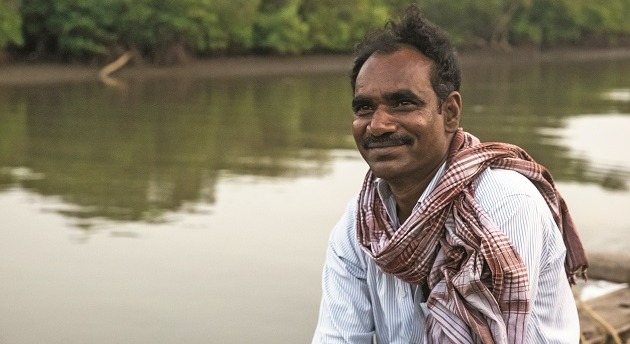 A firebrand conservationist and my guide for the next two weeks, Appa Rao Allarpathi has been regarded as the Mangrove Man of India – a title he detests. He met me as a volunteer for the Fishing Cat Conservancy, the organisation that invited me to observe their compelling conservation and awareness work in the Krishna river delta. Appa Rao’s connection with this habitat began when his work as a consultant for telecommunication companies took him to the surrounding areas to survey locations for what he now says are ecologically-disastrous mobile communication towers. This left an indelible mark on him, as he began to see the destruction of the pristine forest cover of the Krishna district.

Inspired to do something about this, he set out on his motorbike to investigate and research the fascinating mangrove ecology of the region… self-funded. What he saw amazed him – somehow, despite the challenges thrown at them by us, parcels of mangroves thrived. What is more, the ecosystems were home to an abundance of crustaceans, mammals and amphibians – an extraordinary array of biodiversity that depend on these relict wildernesses for their survival. He also began to see how Andhra Pradesh’s fisheries industry relied on the continuing health of the mangroves that serve as a nursery, breeding and feeding ground for fish.

In the last decade, however, possibly three-quarters of the mangroves have been encroached upon by locals and outside investors hungry to set up still more ecologically-disastrous fish and shrimp farms. Large tracts of mangroves therefore continue to be razed brutally to the ground to make way for what can only be a very temporary shrimp industry. A people that once depended on the mangroves to pick out crabs, and angle for fish are now actively participating in the destruction of these life-saving ecosystems. All lured by the commercialized seafood industry and its ever-present, lurking juggernaut freezer ships.

After the 2004 tsunami in the Indian Ocean, the Indian government and many international NGOs realised just how valuable mangroves were as a first line of defense against coastal calamities. After decades of funding and being complicit in their destruction, the World Bank and the Andhra Pradesh Forest Department began funding a mammoth initiative to reforest mangrove land.

At the helm of this effort was Appa Rao. Leading the project with his team of 5,000 people from the surrounding communities, he began replanting mangrove saplings in encroached mangrove mudflats. Through a rigorous process of planting methods – digging fish bone channels, decreasing soil salinity and monitoring growth for five years - the results are now visible. The project has assisted nature in the restoration of around 10,000 hectares of degraded, encroached mangrove habitat. Today, the tracts of land that fed low-cost marine organisms into freezing units for export, have seen a resurgence of ecologically crucial species like fishing cats, smooth-coated otters, jackals and a profusion of avian life.

“I’ve only done 25 per cent of the work here, the remaining 75 per cent has been replicated by nature. Once you begin the process of restoring mangroves, nature lends its full support in time,” Appa Rao tells me.

The Importance of Mangroves

As I travel through the Krishna mangroves, everyone from local politicians to fishermen speak of Appa Rao with high regard for his impactful work. In this river delta, he is no less a celebrity than any Telugu actor. In 2016, Appa Rao received the Disney Conservation Hero award in recognition of the global relevance of his mangrove mission.

Months after my field visit, I call to congratulate him for this award. He quickly dismisses my compliments and begins telling me about his sighting of two smooth-coated otters near the reforested mangroves.

As with any successful local conservation effort, this mangrove rejuvenation project has succeeded in mobilising the support of the community, including previously-evicted shrimp farmers. This process of remedying the loss of mangroves will prove vital to providing the local community with truly sustainable livelihoods. The sea-forest will also protect their families from future storm surges, even as it shores up their food security.

Little-known to most people, mangrove forests can sequester up to five times as much carbon as tropical rainforests. Conversely, when they are destroyed, the carbon stored within them is released, pumping greenhouse gases into the atmosphere. Given the impending dangers of climate change, this can be likened to punching holes in the hull of a leaking ship.

Today, as India deals with the crippling effects of climate change, passionately protecting and restoring mangroves will be a vital part of our ecosystem-based climate change mitigation and adaptation strategy. Restoring these habitats through community led initiatives such as Appa Rao’s will help build resilience against coastal calamities by reestablishing the natural barriers that always stood between coastal people and potential storms, cyclones and coastal erosion.

A John Sawhill quote encapsulates the spirit behind one of the world’s largest mangrove restoration projects: “In the end our society will be defined not only by what we create but by what we refuse to destroy”. For the communities living in the Krishna river delta, they will find an undying ambassador in Appa Rao– whose life’s purpose is to protect this lifeline.