Life Near The Fence

“And when all the wars are over, a butterfly will still be beautiful." - Ruskin Bond

Punjab is the land of the five rivers - Sutlej, Beas, Ravi, Chenab and Jhelum. The network of rivers along the international border with Pakistan has created waterlogged habitats and niches that provide refuge to many species of birds, mammals, and reptiles. BSF personnel work around the clock to stop smugglers from crossing the border, but they can do little to stop wild animals, which do not recognise human-made boundaries.

On either side of the ‘zero line are tall grasses of kahi Saccharum spontaneum and Erianthus munja, agricultural fields near river beds and block forests comprising monocultures of eucalyptus trees. Of all the creatures found here, reptiles are undoubtedly the most feared… and misunderstood. 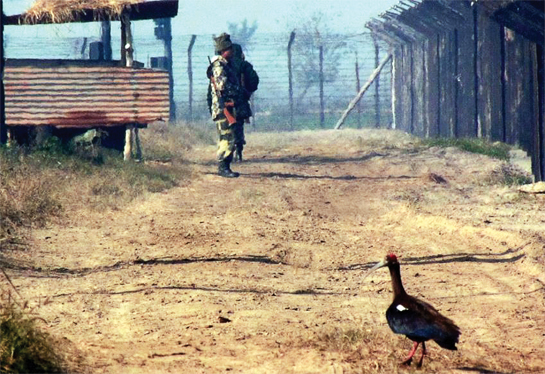 Traditionally the agricultural powerhouse of the country - Punjab has seen groundwater levels plummet in recent years to meet ever-increasing irrigation demands; a classic example of human consumption exceeding nature's ability to replenish itself. There is no dearth of food grains in the vast fields adjacent to the border, which offer ideal habitats for rodents to breed. While humans know their place, snakes can routinely be seen crossing the border and purposefully scanning waterbodies in pursuit of prey, primarily rats, voles and frogs. In summer I have encountered rat snakes, red sand boas, spectacled cobras, checkered and striped keelbacks, saw-scaled vipers, Russell's vipers, Indian rock pythons and common kraits. Expectedly, rat snakes are often misidentified as cobras. Monitor lizards too are frequently seen in the tall grasses bordering ponds and water courses and river bunds. I was once witness to rat snakes fighting along a river bund, when my driver remarked, “Let's put them in a gunny bag. They will lead us to a great fortune." I don't know about ‘fortune but fortunately for me I was carrying my camera and was able to record this rare natural history moment before they disappeared into the bushes. 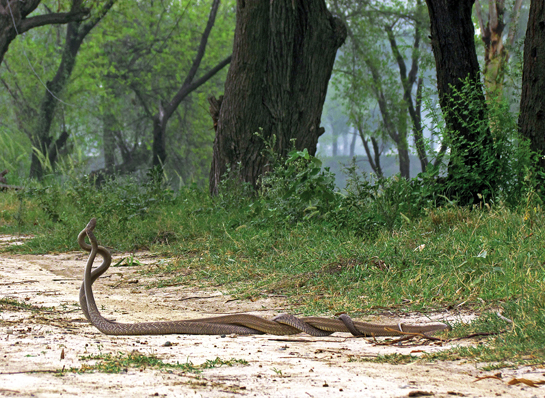 Though I have an equal affinity toward all species, mammals have always drawn my keen interest. I remember being charged by a porcupine on a chilly winter night while sitting in a block forest during an operational ambush. Sitting unobtrusively under a big tree, I heard the sound of rustling leaves… getting louder with every passing second. And then, two large porcupines passed me and stopped just about two metres away. Both surprised by the sudden encounter and feeling threatened, they charged at me with quills erect. I narrowly escaped being injured by a creature I considered anything but an enemy. The following morning, one of my officers told me that he had seen large-antlered deer emerging from the forest to forage near the border fence. Sambar, I thought to myself. Knowing that it would be difficult to spot one near the fence, I placed camera traps to record their presence.

Observing wildlife became a part of my daily routine. These eventually revealed Indian crested porcupines and Indian jackals, moving through the fence, which provided absolutely no obstacle to small mammals.

Though I have not been able to photograph one, on a winter morning while on horseback patrol, I did sight a large stag near a canal. The skittish male moved quickly into the cover of nearby tall grasses. I am not sure how many live in this belt, but sighting a large mammal here was no less an experience than sighting a tiger in a national park. Night patrols offered glimpses of small Indian civets and jungle cats, whose population is thriving in the absence of large predators. Hunting restrictions on the Indian side and religious considerations on the Pakistani side have resulted in a sizeable number of wild pigs. Large sounders of pigs of all sizes, in groups ranging from five to 100 individuals, can sometimes be spotted traversing the barbed border fence, as though asserting their dual nationality.

Frequent crop-raiding by wild pigs has led some states in India to declare them as vermin to allow their killing. In Punjab, where agriculture is a major source of income, permission has to be sought from the state government to cull wild pigs. Across the border, however, wild pig killing drives are organised, where villagers gather with nets and beating sticks accompanied by hunting dogs to chase and corner them.

Another mammal, the Indian hedgehog, can be seen foraging near the fence by a keen nighttime observer. The slow-moving, curious, nocturnal animal inhabits vacant burrows and when threatened will quickly roll into a spiny ball, exposing just its nostrils to breathe. 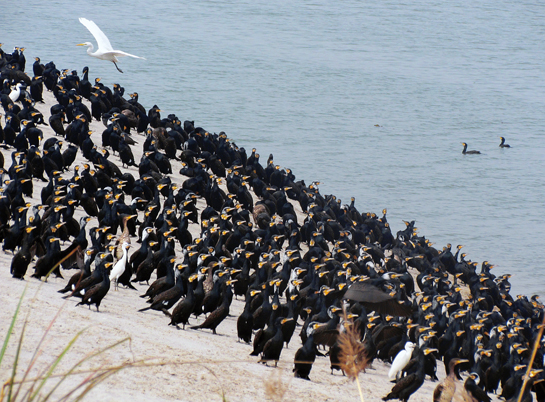 Birding at the Border

This frontier region provides sanctuary to birds migrating to India in winter. Watching Bar-headed Geese as they stopover during their migration is a heart-lifting sight. Black-headed and Brown-headed Gulls are passage winter migrants that spend relatively longer periods in the waters of the Sutlej. The gathering of three major cormorant species - the Little, Indian and Great Cormorants overshadows all else, offering an awe-inspiring spectacle. It is difficult to differentiate Gull-billed Terns in this period when they are part of the mixed flocks.

Painted, Woolly-necked and Asian Openbill Storks can be seen sporadically throughout the year in smaller aggregations. Spend some time near a riverbank, and one might see an agile Pied Kingfisher, diving like a heat-seeking missile, only to emerge with a tiny fish in its beak, a behaviour replicated by River Terns in winters. Ubiquitous Indian Grey Hornbills can be seen on fruiting trees along the border posts, as can Black-rumped Flameback Woodpeckers.

The paradoxical peace of the border also provides refuge to many species of owls. The magnificent Eurasian Eagle-owl is common along river banks on trees and rocks and is mostly sighted in pairs. The Collared Scops Owl and Barn Owl prefer woods near farmlands. The Spotted Owlet is the most common of all, and uses the border fence as a nighttime perch. Border Outposts (BOPs) provide safe havens for many breeding owl species and with luck, one can sometimes spot juveniles peeping curiously from the safety of their nooks.

Early mornings and evenings are best for birding, especially near waterbodies, fruiting trees, marshes, open fields and suitable perches. Political boundaries and physical obstructions hold no meaning for birds and small mammals and should not influence their movement. Unfortunately, however, different human attitudes towards wild species and different laws across the International Boundary do affect wild animals.

Restriction on fishing by villagers has resulted in a good density of testudines. The Indian flap-shell, brown-roofed and Indian softshell turtle are commonly seen. Despite restrictions, however, subsistence fishing does see turtles sometimes end up on platters. I recently worked with local fishermen to ask for their support in not allowing turtles to be trapped and killed in their nets. 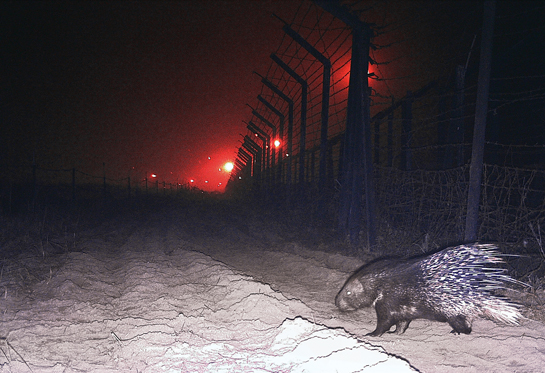 One thing is clear. Wildlife conservation is not possible in the absence of legislation and enforcement, but this must be coupled with awareness. The impediment is shortage of trained manpower and a lack of political will. The future of wildlife and nature conservation in India depends on effective cooperation and networking between varied enforcement agencies. This would not only act as a force-multiplier, but also increase awareness. Security personnel, especially forces guarding borders such as the Border Security Force (BSF) along Bangladesh and Pakistan, the Sashastra Seema Bal (SSB) along Nepal and Bhutan, and the Indo-Tibetan Border Police (ITBP) along the Chinese border, could easily form a wildlife and nature cell to deal with wildlife crimes in their ‘area of responsibility. If such agencies were to liaise with the Wildlife Crime Control Bureau and state Forest Departments, some of our finest biodiversity havens may prove to be lands that are least hospitable to humans. But this is a big task and can only be decided at the highest level of decision-making.