Who does one turn to when the government fails to uphold its own laws? As the country faces a national lockdown, India’s Ministry of Environment, Forest and Climate Change (MoEFCC) appears to be on an ugly environmental clearance spree for industrial and infrastructural projects. All reports indicate that the Ministry is in fact bending over backwards to make clearances for such projects as resistance-free as possible.

In a glaring example of its callous attitude towards the environment it is meant to protect, the Standing Committee of India’s National Board for Wildlife (NBWL) gave the nod to North Eastern Coal Fields, a subsidiary of Coal India Ltd. (CIL), to continue mining in the Saleki Proposed Reserve Forest (PRF), that is part of the larger Dihing Patkai Elephant Reserve in upper Assam. 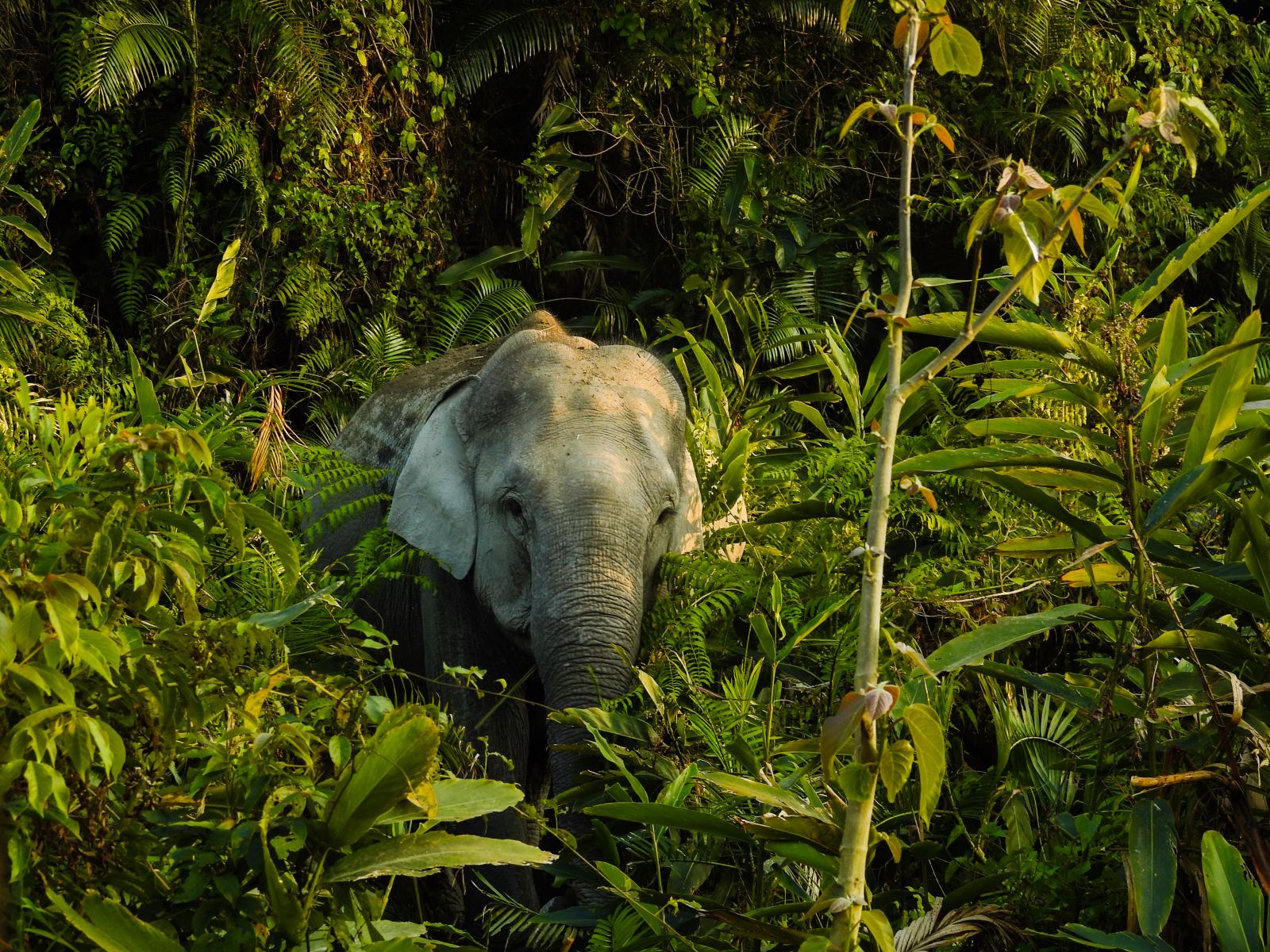 The Dihing Patkai Elephant Reserve is home to a significant population of the Asian elephant and 40 other mammal species. Photo by: Bitupan Kolong.

Shockingly, this approval granted by the NBWL comes in the wake of its own claims of “clear evidence of rampant violations of local forest laws and Forest (Conservation) Act, 1980, by the North Eastern Coal Fields". In essence, the NBWL has rewarded the company for illegal mining by approving its future operations.

In a letter written to the Additional Chief Secretary (Forests) of Assam, on November 25, 2019, the Deputy Inspector General of Forests, MoEFCC, wrote that there is “… clear evidence of rampant violations of the Forest (Conservation) Act, 1980, in the proposed site.” This letter was written in response to the site inspection of the CIL’s Tikok Open Cast Project that was carried out a month prior by the  MoEFCC’s Regional Office, Shillong. CIL has now sought a diversion of 98.59 ha of forest land in Tikok area, in the Saleki PRF. Curiously, CIL’s subsidiary, the North Eastern Coalfields, has been mining in the area since 1973. According to CIL officials, a 30-year mining lease was granted to CIL in 1973. Though the lease expired in 2003, CIL only applied to the MoEFCC for lease renewal nine years later, in 2012. All this while, coal mining continued illegally in the area. 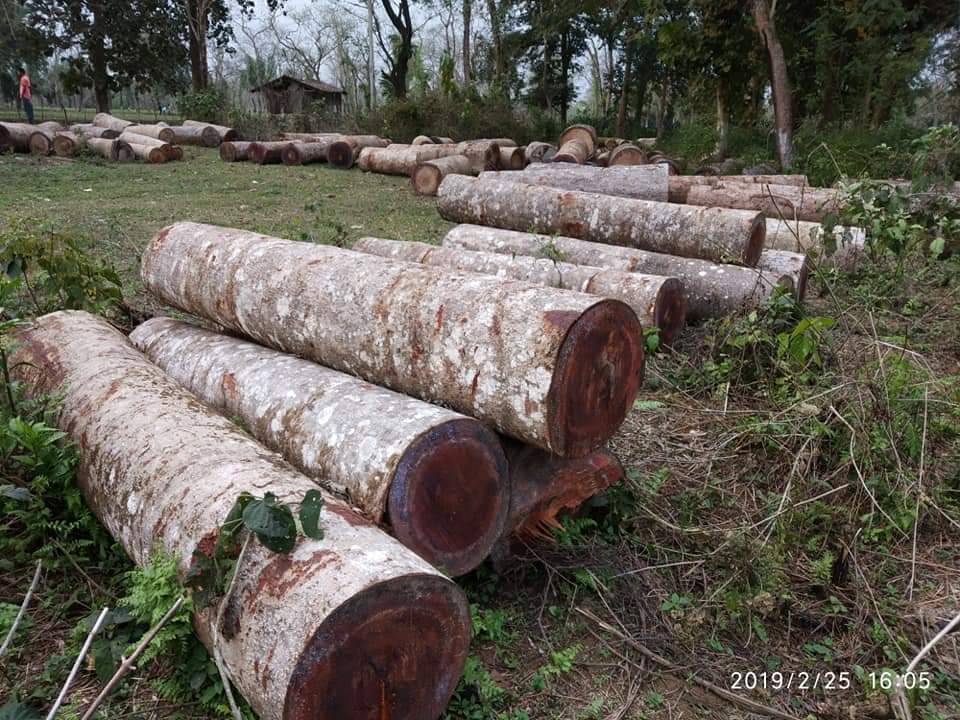 Of the 98.59 ha. of forest land sought for mining, 12.93 ha. was broken up for mining by 2003, and another 44.27 ha. was broken up between 2003 and 2012. Then CIL applied for lease renewal for mining 41.39 more hectares in 2012. No fresh mining should have been carried out until the lease was granted. Yet, not only did the coal mining allegedly continue unabated, official correspondence and reports between government functionaries indicate that the Assam State Government and many senior forest officials were privy to these violations.

“Despite my incessant attempts at obtaining information from the Assam Forest Department with respect to illegal coal mining in upper Assam, through repeated filing of Right to Information (RTI) applications, the Forest Department would not do so, citing confidentiality. Request for inspection of the file on illegal coal mining was also denied. The Principal Chief Conservator of Forests and Head of Forest Force also failed to furnish the enquiry report submitted by the committee constituted to conduct a field-level enquiry into the illegal coal mining within Digboi Forest Division, even after 10 months of putting in a request, which it is legally bound to respond to under the RTI Act, 2005. The only conclusion I can draw from this is that the Assam Forest Department is trying to cover up and protect the coal mafia and complicit officers,” states RTI and environment activist Rohit Choudhury. 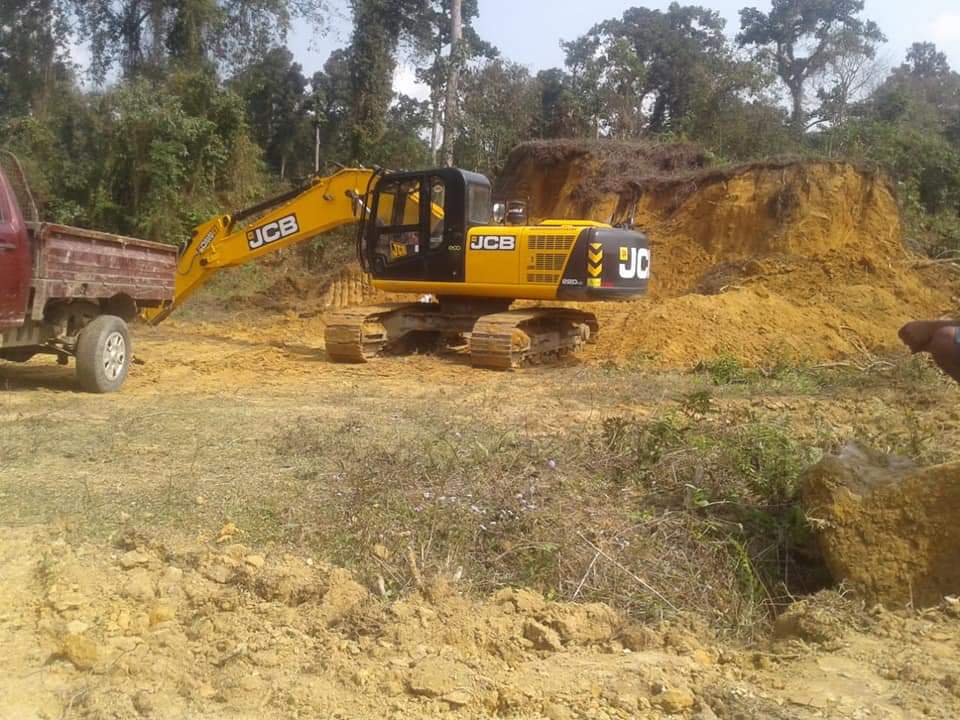 Though CIL's 30-year mining lease, granted in 1973, expired in 2003, a lease renewal application was only submitted nine years later, in 2012; all this while, coal mining continued illegally in the area. Photo by: Debajit Moran.

In the publicly available minutes of the meeting of the Forest Advisory Committee (FAC) held in June, 2013, the FAC acknowledged that no forest clearance or renewed lease was granted to the CIL in 2003 or at a later period, but mining operation continued in clear violation of the Forest (Conservation) Act, 1980.

In one of its letters to the Principal Secretary (Forests) of Assam in 2019, the MoEFCC reprimanded the Assam State Government for its lack of response and failure to furnish documents to the Central Government. The MoEFCC even directed the state government to share the list of senior forest officers who held various posts between 2003 and 2019, and CIL officers appointed to North Eastern Coalfields during the same period, for the purpose of taking action against them. The Ministry also sought information on any action that the state government might have taken against the perpetrators for violating the Assam Forest Regulation, 1891, and the Forest (Conservation) Act, 1980. No action was taken, until as recently as May 2020, when the Assam Forest Department levied a fine of Rs. 432.5 million on CIL for illegally mining coal in the reserve forest.

However on April 7, 2020, in an inexplicable turnaround of the Ministry’s own stance, the Standing Committee of the NBWL “recommended for approval” CIL’s Tikok Open Cast Project. The very project that has grossly violated the law of the land. 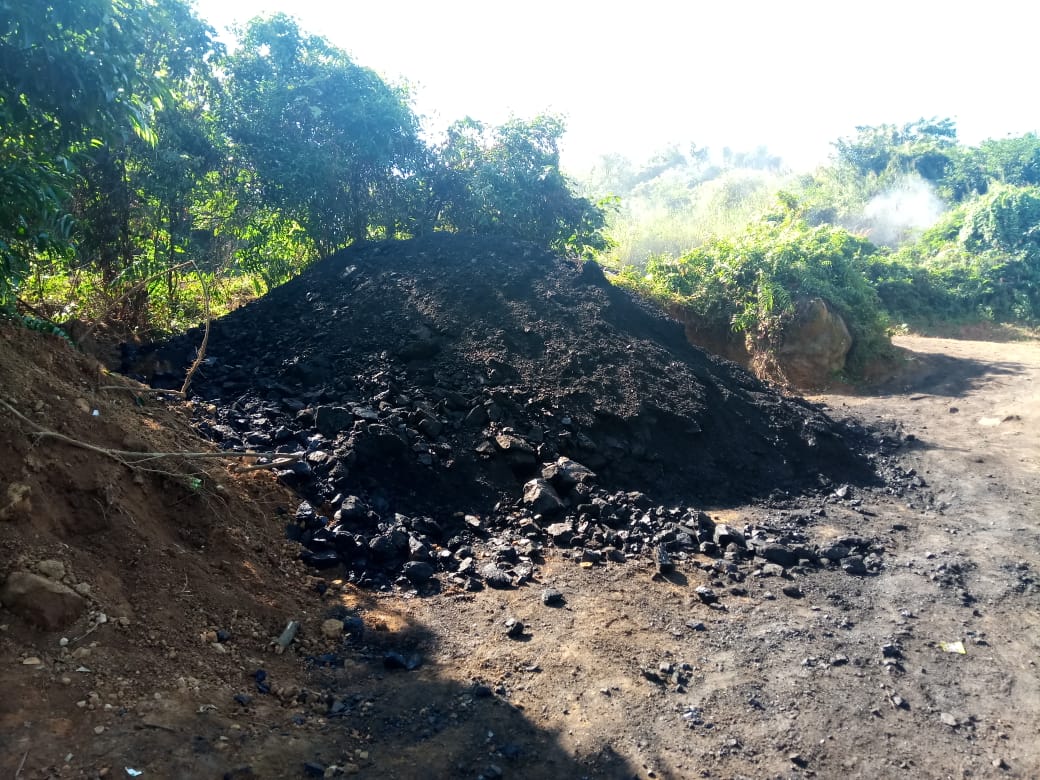 Coal mining is one of the most environmentally damaging human activities - it destroys forests, causes pollution, affects freshwater systems, and adds to climate change. Photo by: Debajait Moran.

The questions that now arise are - how is project approval permissible when the user agency is being investigated for environmental crimes and has been charged with multiple violations? Why is the project proponent being allowed to legally exploit the land which it has already abused with full impunity? And, how is the NBWL continuing to make policy-level decisions without the board having met even once since 2014, when it is mandated to meet at least twice a year.

According to elephant ecologist Raman Sukumar “a sizeable population of elephants” inhabit the Dihing Patkai Reserve which is under threat from the mining project. Sukumar was a member of the committee instituted by the NBWL in July 2019 to look into the CIL proposal and assess the mining area. The Dihing Patkai Wildlife Sanctuary is part of the elephant reserve and covers 111 sq. km. of lush rainforest. The sanctuary hosts over 40 species of mammals including the endangered hoolock gibbon and the Asian elephant; more than 300 species of birds; over 100 species of orchids, some of them extremely rare and endangered; more than 150 species of butterflies; over 40 species of reptiles; and large old-growth trees from over 60 different species. This forest is part of the vast, rich and indispensable biodiversity vault that is India’s Northeast region. These forests are coming under increasing threat from various ecologically destructive industrial and infrastructural projects which have been granted environmental clearance on baseless and botched biodiversity assessments. 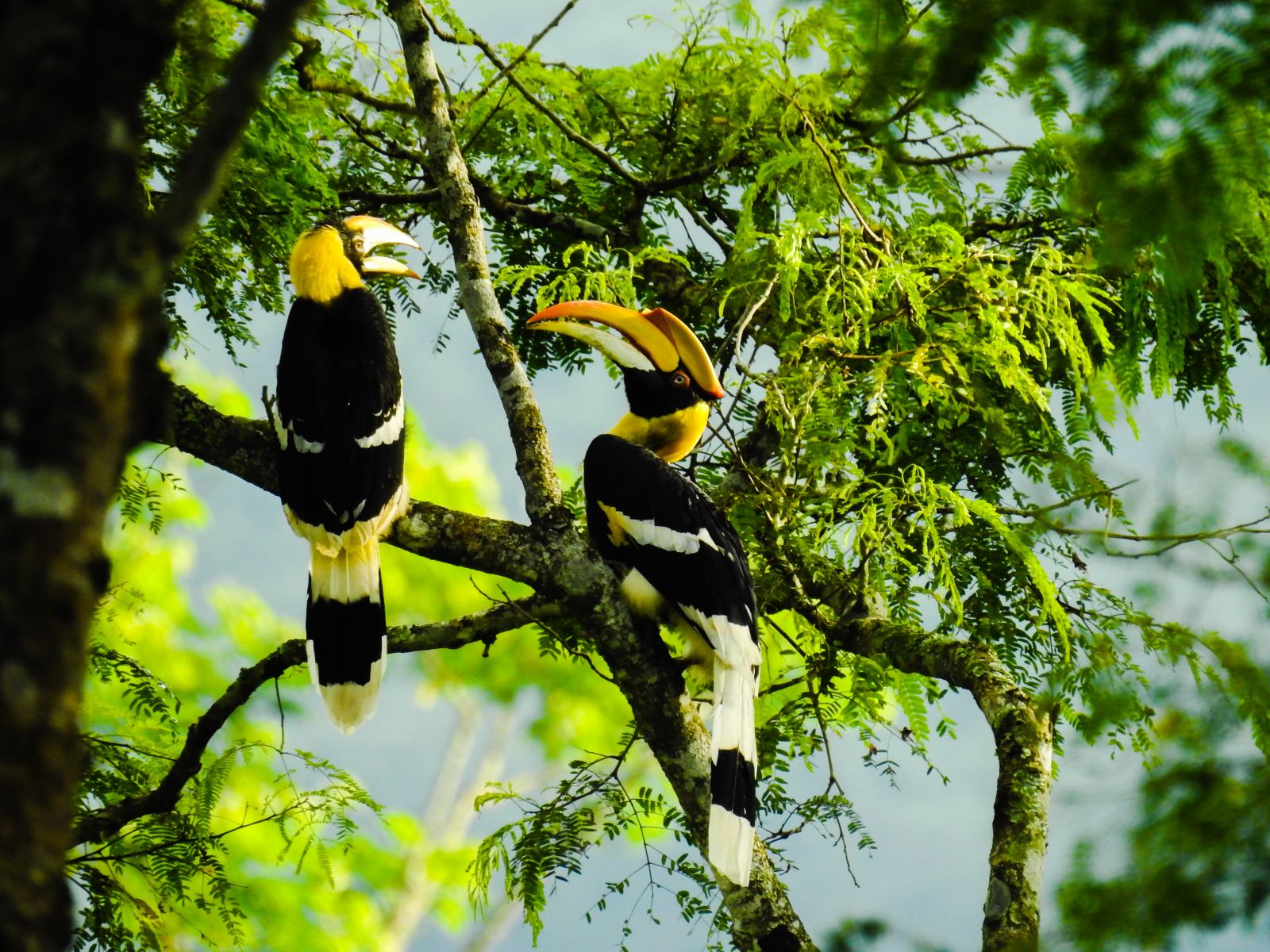 More than 300 species of birds have been recorded so far in the Dihing Patkai Wildlife Sanctuary, including three species of hornbills. Photo by: Bitupan Kolong.

Upasana Ganguly, who heads the Wildlife Trust of India’s Right of Passage: Elephant Corridors Project conveys the significance of this elephant habitat. She explains, “The Dihing Patkai Elephant Reserve together with the adjoining Deomali Elephant Reserve supports a population of around 600 elephants (Varma. S and A.A Goswami (2019)-ANCF). There are two crucial elephant corridors present in the Dihing Patkai Elephant Reserve spanning across the Digboi and Doomdooma Forest Divisions facilitating the regular movement of elephants throughout the year. Dihing Patkai is also one of the last strongholds of the endangered White-winged Duck, Assam’s state bird. The elephant habitat and corridors in the region are already affected by agricultural expansion, tea plantations, industries, and linear infrastructures like highways and railway tracks. The proposed open cast mining might further aggravate these threats.”

A study covered by Mongabay-India states that the Asian elephant is set to lose over 40 per cent of its present habitat in India and Nepal in the next few decades. This is only going to put more pressure on the already imperiled wild elephant populations and will exacerbate the burning issue of human-elephant conflict in the country.

"The NBWL has committed a big mistake by allowing extraction of coal from within the Dihing Patkai Elephant Reserve in Assam. While local communities need better livelihood options during these testing times, it is important to note that coal is a non-renewable resource. Destruction of a natural ecosystem, for temporary monetary gains, will push the local communities towards a deeper crisis in the future. Additionally, it is known that coal mining is one of the most environmentally damaging human activities - it pollutes air, pollutes river systems and pollutes land; destroys forests; causes mercury deposition, affecting freshwater systems, and adds to climate change. While the world is making giant strides in moving towards a coal-free economy, clearing a gravely destructive project, especially in one of the most pristine habitats of India, is a regressive step on the part of an apex body such as the NBWL," cautions Anish Andheria, President, Wildlife Conservation Trust.

At a time when biodiversity loss and a changing climate are posing an existential threat to the human species, it is essential that India reconsider environmentally destructive projects, especially those within primary forests and Protected Areas. At a time when the lockdown has made it difficult for citizens, activists, conservationists, environmentalists, lawyers and indigenous communities to place their opposition on record, the MoEFCC is clearing developmental projects one after the other. What will it take for the Ministry to respect its mandate and turn to the protection and not the sale of India’s natural assets?

Purva Variyar is a conservationist, writer, and editor. Her true passion lies in science communication. She currently works with the Wildlife Conservation Trust. Purva has previously worked as a Senior Editor and Science Communicator with Sanctuary Asia magazine. She has also worked on human-snake conflict mitigation and radio-telemetry of Russell’s vipers under The Gerry Martin Project.

Read more on how an Assam based NGO, Green Guard Nature Organization, is calling for the NBWL to reconsider allowing coal mining in the Reserve.