From The Rooftop Of India

After crossing majestic mountaintops and fast-flowing streams, on July 19, 2015, we arrived at Sarchu, a small, temporary settlement at 3,000 to 3,650 masl. Entering Ladakh is a dramatic spectacle – the green valley gradually gives way to brown, and then grey, gigantic, granite and gravel. This rain shadow region of the Himalaya is called the cold desert. In winter (November to April), the region experiences frequent snowfall (its main source of water) and remains cut off from the rest of the country. Summers are short, bright and favour short-term cultivation. Recent climate trends are, however, causing unusual rainfall and flooding, even as glaciers retreat. With every passing day the land turns more fragile.

In the last few years, we travelled across eastern Ladakh, including Pangong Tso, Tso Kar wetland, Tso Moriri, and Hanle. Armed with permits from the Deputy Commissioner of Leh, we left at dawn on August 2, 2015. In Zingral, an army camp, we watched the antics of the rufous-grey, furry marmots outside their deep, interlinked burrows where they hibernate in winter and store food. Shy of humans, the large rodents would dash into their burrows when we inched closer. We also spotted a male Chukar Partridge Alectoris chukar emitting feeble calls to a female foraging nearby, its neck outstretched and eyes shut. Close by we also spotted a Little Owl Athene noctua that flapped its wings and took off before we could photograph it. 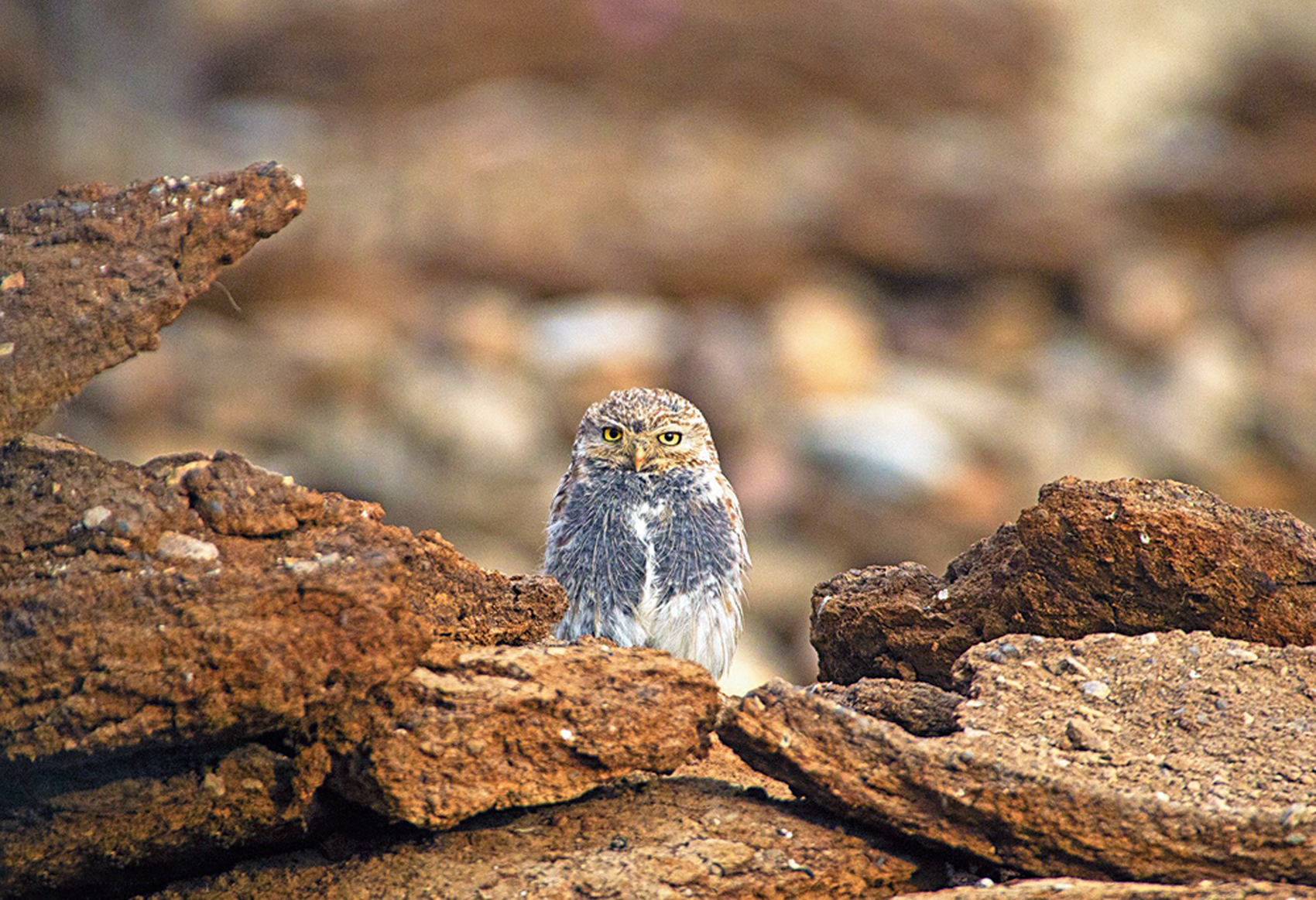 On the way from Tangtse to Pangong Tso, we passed Muglib, a marshy area often favoured by Black-necked Cranes Grus nigricollis for foraging and when we reached the lake, we spent an amazing hour on its western shore. Pangong Tso, at 4,350 masl., is a magnificent endorheic lake (one that does not drain into the ocean), which extends across 604 sq. km., and is surrounded by scattered patches of dwarf vegetation. Roughly 60 per cent of the lake lies in Tibet and despite its salinity, the lake freezes over in winter. The brackish water supports very low micro-vegetation, but is a vital breeding site for a diversity of birds, such as Bar-headed Geese, Brown-headed Gulls, Common Terns and Ruddy Shelducks. Additionally, kiangs, mountain ungulates and Himalayan marmots also find sustenance in this austere paradise.

At such heights the weather is fickle at best and en route to our return journey back to Leh, our vehicle broke down near the army camp at Tsoltak. By the time we hitched a ride from a local, it had begun to rain heavily, followed by landslides. The night of August 3 was harrowing, but we finally reached Tso Moriri after a few days, on August 8. Fortunately, the highway had been cleared and we were able to find accommodation and food in temporary tents set up in Debring. A narrow, broken road then took us to a valley where we spent time observing kiang, the native wild asses of the Tibetan plateau, as they foraged on sedges and meadow grasses. 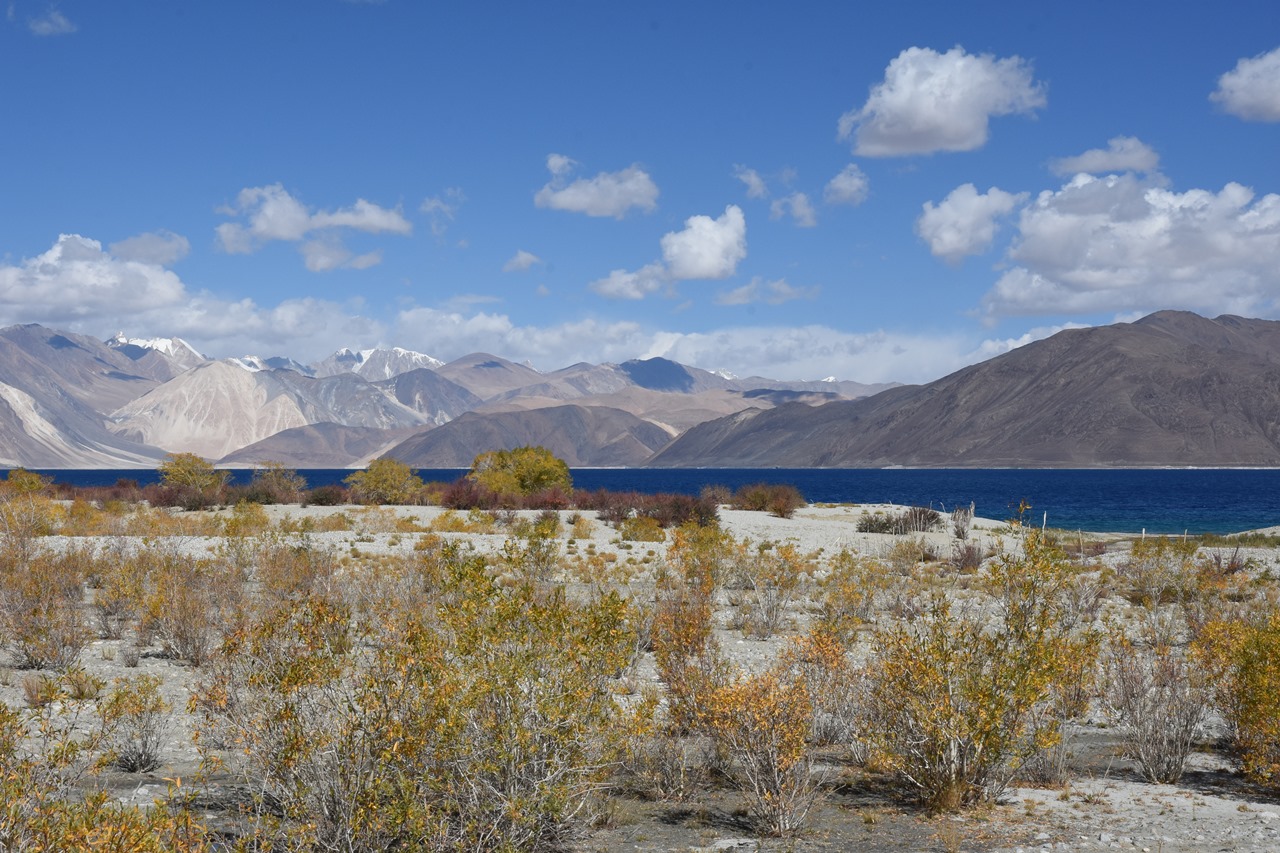 Later that day we arrived at Tso Kar, a brackish lake framed by bare, snowy tipped mountains. We were blessed here, with our first-ever sight of Black-necked Cranes! Anil, slowly and carefully waded knee-deep through the waters to obtain a low-angle shot of the distant and exceedingly graceful birds. The Tso Kar wetland is an otherworldly, mesmerising landscape. The two lakes here, Tso Kar and Startsapuk Tso extend over an area of about nine square kilometres, connected by an inlet stream. Interestingly, while Tso Kar is saline, the adjoining Startsapuk Tso holds freshwater.

The peaks of two mountains towered over the adjoining More plains – Thukje (6,050 masl.) and Gursan (6,370 masl.). The nomadic settlement of Thugje is located about three kilometres to the north. The microclimate is extremely varied, with winter temperatures plummeting to a bone-chilling -400C, while summer temperatures may rise above a toasty 300C, with extreme day-night fluctuations being the order of the day.

This isolated wonderland, which forms the basin of Tso Kar lake and the More plains, is one of the most important habitats of kiangs, or Tibetan gazelles, Tibetan wolves and foxes. We had a rich day, with sightings that included silver voles, Himalayan marmots, blue sheep and a flock of Bar-headed Geese en route to Tso Moriri.

The Eurasian Magpie Pica pica bactriana is often seen in gregarious flocks near human habitation. An intelligent bird, it is one of the few non-mammals that can recognise itself in a mirror!  Photo:Anil Kumar.

Often referred to as ‘Mountain Lake’, Tso Moriri in the trans-Himalayan biogeographic region of Ladakh is flanked by bare, rocky mountains, wide sandy patches and sparse vegetation. Located at 4,522 masl. in Changthang plateau, it is an oligotrophic lake (having alkaline water) spread across 135 sq. km., which makes it India’s largest high-altitude lake exclusively within Indian Territory. The waterbody is recharged by springs and melted snow, much of the water flowing in from two major streams from the north and southwest. Expansive marshes sprawl at the confluence of the premises and this attracts kiang that foraged on meadow grasses.

Though we intended to stay for several days, locals’ warnings of further rainfall and landslides compelled us to leave Tso Moriri the very next morning on August 9. One night of traversing this tough landscape in unforgiving terrain had been enough adventure for a lifetime! In the course of the day, we were gifted another sighting of a Black-necked Crane pair at Puga and then another at Tso Kar. Puga is a small marshy area, about a square kilometre in size, fed by a small snow-fed stream. The few water-logged areas, salt puddles and scrub vegetation supported both wild species and a few isolated agricultural fields, interspersed between barren lands.

The next year also saw us visit Hanle via Pangong Tso, Chushul, Loma and Rongo Track. On September 24, 2016, we reached Pangong Tso where we had a field day birding. We moved on to Chushul, where we observed still more avians – Bar-headed Geese, Common Mergansers, and Crested Grebes. At the Tsaka La valley, which connects with the Indus river valley at Thangra, we were greeted by finches, gulls, wheatears and waterfowl. We proceeded to Loma, located at the confluence of Indus and Hanle rivers. It is a huge marshy area surrounded by rocky, sandy mountains and is a breeding ground for Black-necked Cranes of which we spotted five individuals (no young), and noted with dismay the presence of feral dogs. 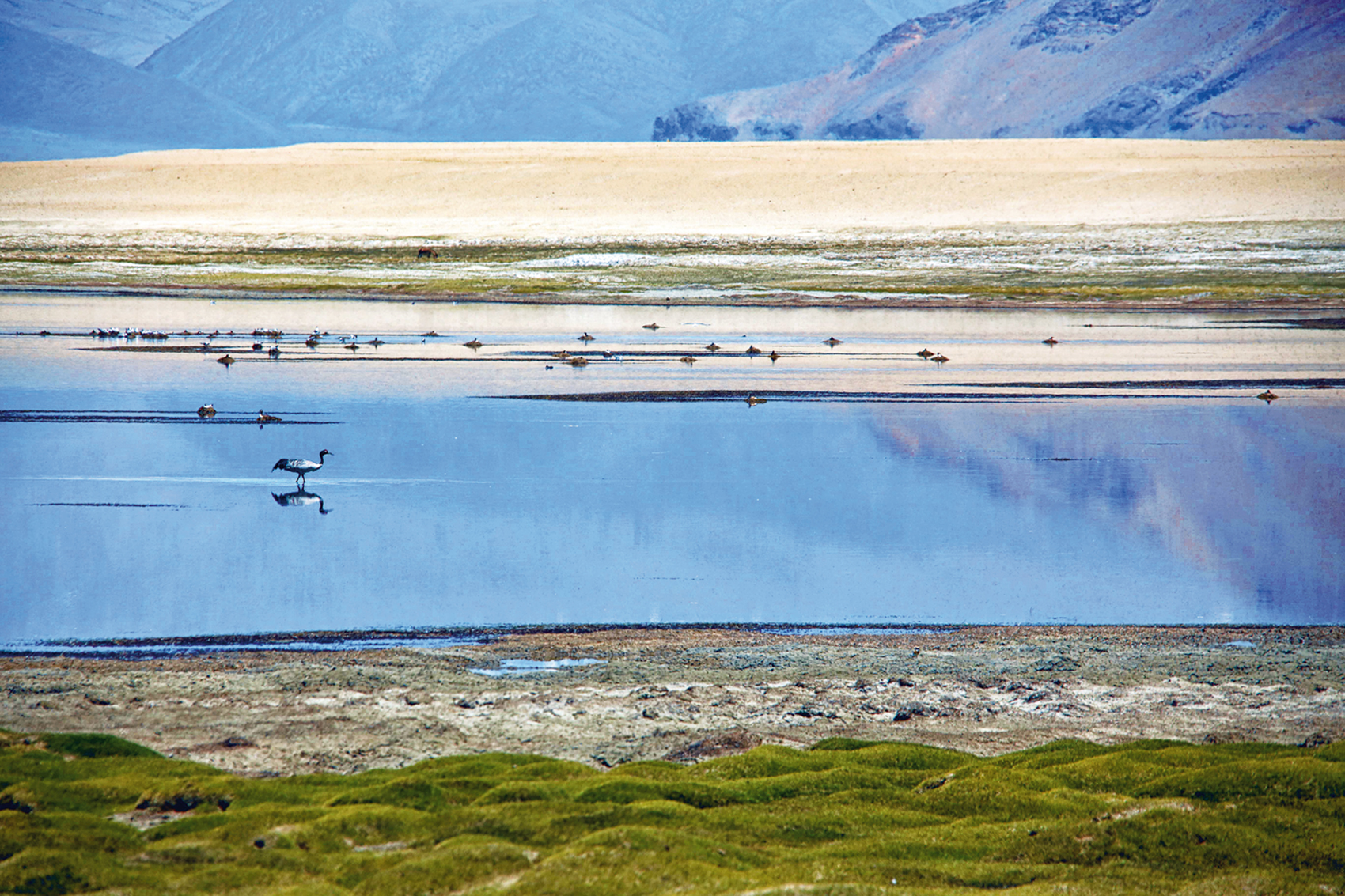 The marshy patches along Hanle river also support aquatic birds such as waders and ducks, while nearby rocky and sandy areas were preferred by wheatears, finches and other arid zone birds. Lal Pahari wetland between Loma and Hanle hold waterfowl and Black-necked Cranes. Hanle is an ancient human settlement, best known for its iconic Hanle Monastery (gompa). Here the vegetation is thin, comprising willow and xerophytic dwarf bushes. The marshes act as an important breeding ground, inviting Bar-headed Geese and Brahminy Duck in summers, and also mammals including Pallas’s cats, kiangs and marmots.

We were fortunate to sight six Black-necked Cranes, including two young ones – two at the Startsapuk and Tso Kar lakes, and four at the Tso Kar wetlands. Towards Puga, three kilometres away, we saw silver voles and a small flock of Tibetan Partridges. Inching close to get a better look at the shy Tibetan Partridges, we suddenly noticed a huge pair of eyes close to us and spun around and instinctively shot off a few frames. It was a woolly hare! Motionless at first, it soon bounded away into the safety of some rocks. What an abundance of birds we saw – finches, sandpipers, wheatears, redstarts, pigeons, Brown-headed Gulls, Pallas’s Gulls and Little Owls. Tso Kar and Puga also act as major breeding grounds for Black-necked Cranes, Bar-headed Geese and Ruddy Shelducks. How climate change is likely to impact such species and their migrations is what we need now to study and monitor, so as to come up with effective conservation plans.

We made one last trip to this stunning landscape before the pandemic upturned life as we know it. On May 24, 2019, we headed towards Tso Kar from Leh, surveying the Sindhu and Shey marshes, birding along the way. We were thrilled to see a pair of Ibisbill just about 30 m. away at the Indus river near Sindhu Ghat. We then proceeded to Rumtse village, the last human settlement before Tanglang-La Pass, a vast deserted plain where the only greenery we saw were small, perennial shrubs and herbs, mostly Herasieum pinnatum, Caragana versicolor and Echinops cornigerus, so crucial to kiang. We stopped to watch 16 of these magnificent animals in two loose groups near Debring before making our way to the Tso Kar wetland. Along the way we sighted the highly endangered Saker Falcon, so victimised by the illegal wildlife trade and the steady loss of its habitat. 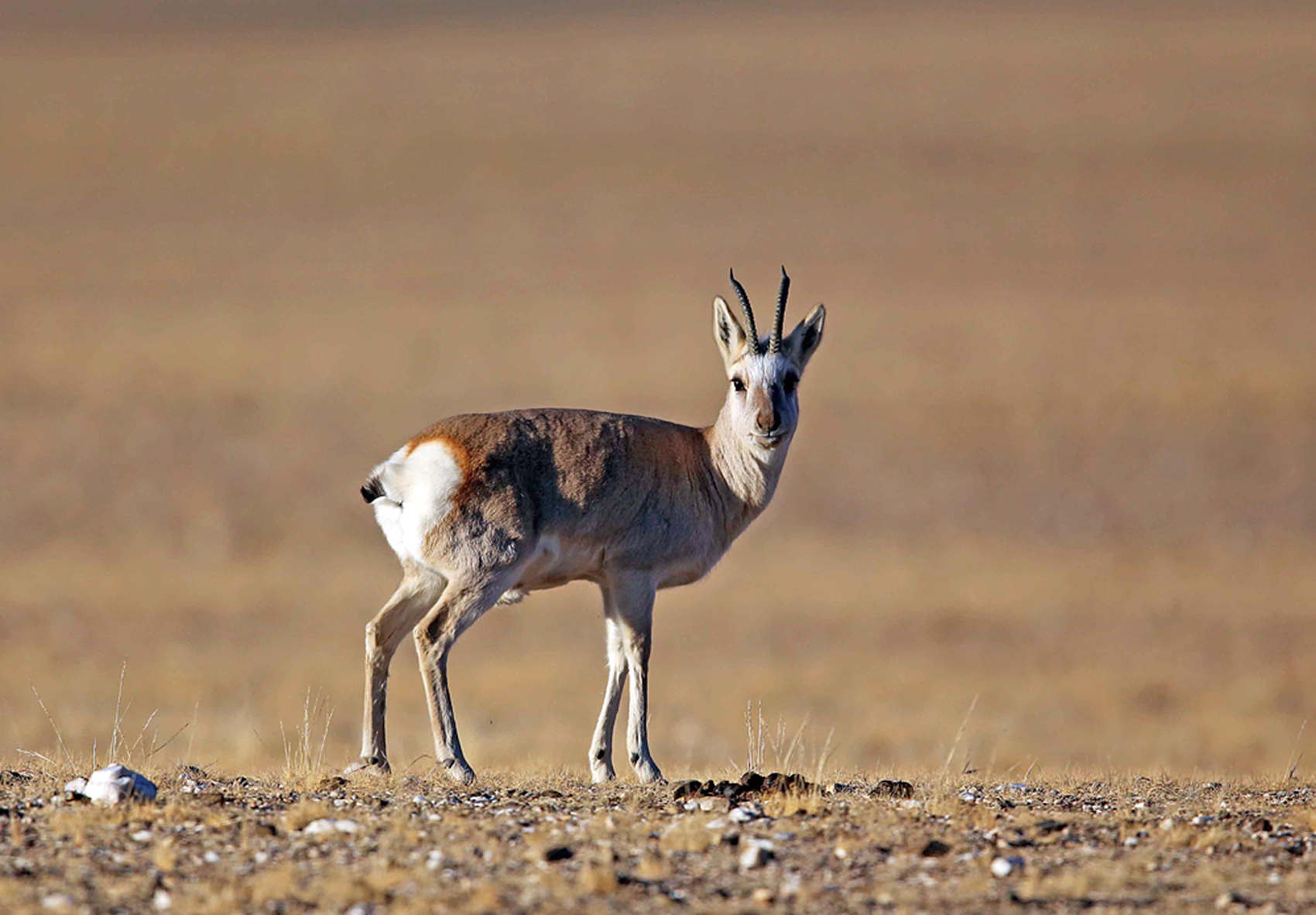 On May 25, 2019, while birding near Tso Kar lake, about a kilometre’s walk from our homestay, we heard the distant call of a Black-necked Crane and began walking towards it. After climbing a sand cliff, we spotted not one, but a pair of Black-necked Cranes and on our return were blessed by the sighting of a Little Owl, a stealthy hunter and a very quiet flier.

Ladakh is anything but a ‘barren’ land. To witness its diversity requires patience and an understanding of its ecological value. But as we sit here to pen this for Sanctuary, we realise with concern that virtually every species we saw and have written about here is vulnerable to the climate crisis. Quite literally, Ladakh is changing right before our eyes. 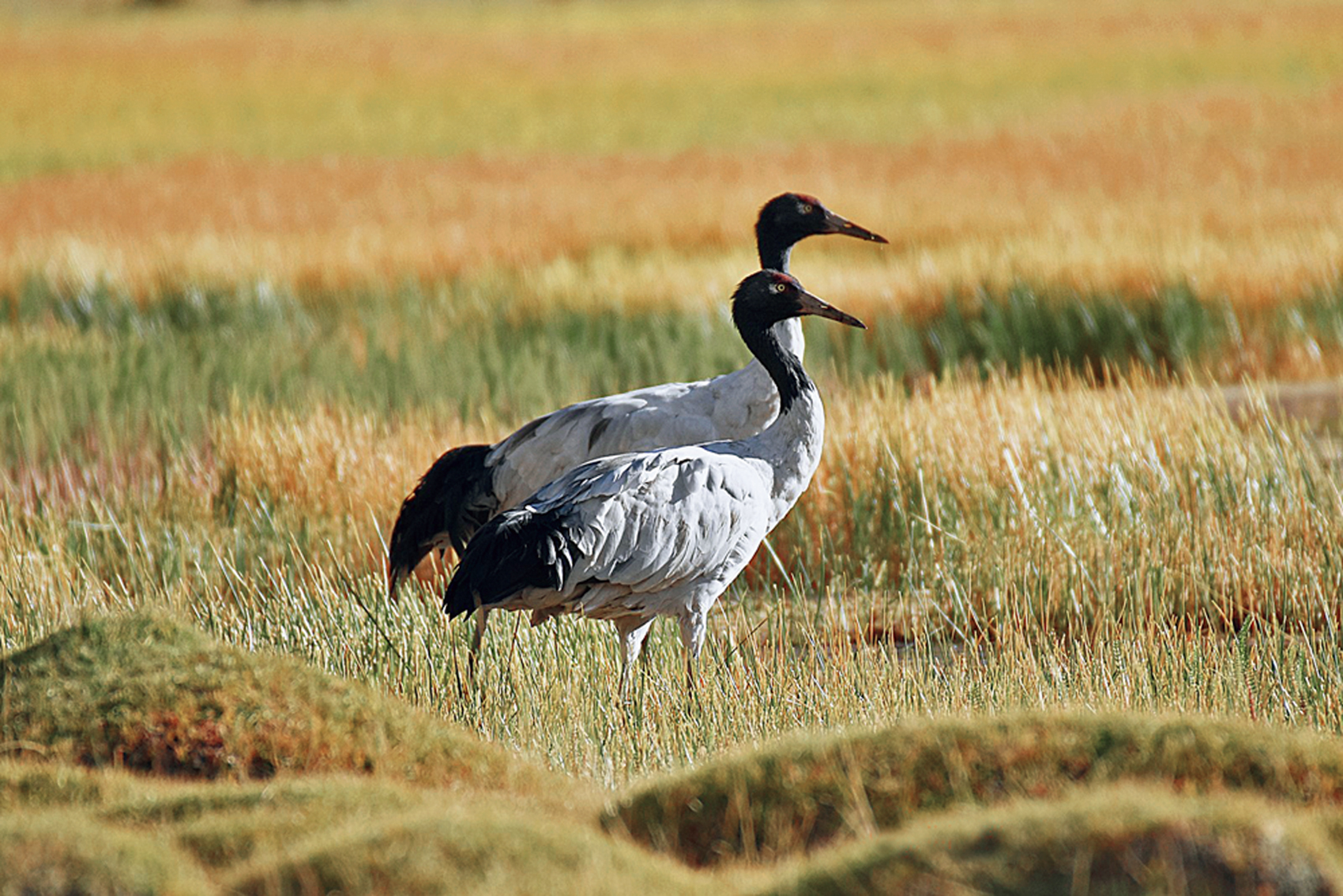 A pair of Black-necked Cranes at the Loma marsh. Photo: Anil Kumar.

Distributed across Asia, it mostly breeds on the Tibetan plateau, including some wetlands in eastern Ladakh, and winters mainly in remote parts of the trans-Himalaya in India. The estimated global population of the Black-necked Crane is around 8,800-11,000. The species is listed in Schedule-I of the Wild Life (Protection) Act, 1972 and is listed ‘Vulnerable’ under the IUCN Red List. In selected wetlands in eastern Ladakh, the birds are often seen congregating in small groups. Anil Kumar recorded about 23 individuals. The authors’ discussions with locals revealed that the local population may be around 51 individuals. Urbanisation, fencing around wetlands, shrinking of lakes, expanding agriculture and feral dogs threaten the population in Ladakh.

Anil Kumar is a senior scientist working with the Zoological Survey of India, Dehradun. He has been investigating the avifauna of western Himalaya, and behavioural biology of birds including acoustic communication. Iqbal A. Khan is a doctoral candidate, working on the behavioural ecology and distribution of the Eurasian Magpie in Ladakh. He has been closely associated with the wildlife census and awareness campaigns organised by Department of Wildlife Protection, Ladakh.