Hundreds of birds - Spot-billed Pelicans, Grey Herons, Asian Openbills and Black- headed Ibises - lie dead on the floor. Scattered among the carcasses of birds are smaller mammals - monitor lizards, Indian hares, jungle cats, palm civets and even jackals. This is Puducherry or Pondicherry, specifically, a small stretch of road between Villianur and Koodapakkam.

S. Prasad, writes here of thousands of wild animals meeting a grisly end every year. Thousands of birds are caught every week from the Oussudu Lake Bird Sanctuary and sold for their meat at roadside stalls on Koodapakkam road, Odiampet road junction and Villianur road.

These shaky images, taken from a moving motorcycle, to avoid physical threats from the perpetrators of this trade, are enough to give any wildlife enthusiast, or indeed anyone concerned about Indias ecological future, sleepless nights.

Oussudu is home to countless migratory birds that visit between October and May, plus a host of resident birds and mammals, many highly endangered, which survive here all year round.

Their nemesis is a nomadic tribe, the Narikuravas, who struggle in vain, but with deadly effect to lift themselves from poverty by stripping this biodiverse region of its animals.

Interestingly, the name Narikuravas means “the jackal people", derived from their uncanny ability to trap the elusive animal. Jackals are trapped by building a netted enclosure, whereupon the hunters mimic the calls of a jackal. Inquisitive to a fault, the jackals tend to approach close to the net, where they are clubbed to death. Also called Kuruvikaran - the bird men, these extremely effective hunters, traditionally used domesticated partridges as decoys to attract wild ones, which are then caught and sold for meat.

Today, they live close to the sanctuary, enter surreptitiously at dusk and use country-made guns to telling effect. Food laced with the banned pesticide, Endosulfan, is also dusted on water plants, which quickly kills unsuspecting birds and causes the death of an untold number of aquatic organisms.

The heartbreaking sight of these baby parakeets torn from their homes is only one of the devastating scenes witnessed by the author. The plunder of Oussudu must stop, to the benefit of both people and wildlife. Photo: S. Prasad.

Laws exist to prevent such hunting practices, including fines of Rs. 25,000/- or imprisonment or both. But the only ones caught are hapless wild species. The hunters manage to get away scot-free despite bringing down hundreds of birds every day.

Prices for the contraband range from Rs.100 a kg. for Great Egrets and Purple Moorhens to Rs. 400 to Rs. 500 per kg. for Spot-billed Pelicans, Grey Herons, Asian Openbills and Black-headed Ibises. Additionally, monitor lizards and Indian hare fetch over Rs. 600 per kilo.

A local ornithologist, on condition of anonymity, told the author: “We got hold of several birds including the Common Coot, Purple Moorhen and Spot-billed Duck recently by interacting with the Narikurava tribes and pretending to buy them. Though the author alerted the Forest Department, it turned counter-productive with the officials berating us and abusing us for repeatedly and ‘needlessly reporting such issues."

So who buys the birds? Local villagers… blissfully unaware that with this ‘bush meat they are ingesting deadly toxins that could kill their own families.

When contacted, the Deputy Conservator of Forests, Anil Kumar, said that the Forest Department had in fact arrested some Narikuravas for poaching a few times, but the tribals said “they had no other source of income."

Following recent articles on the poaching, the Forest Department has undertaken some raids and seized the birds. However, no arrests have been made nor weapons/traps seized. 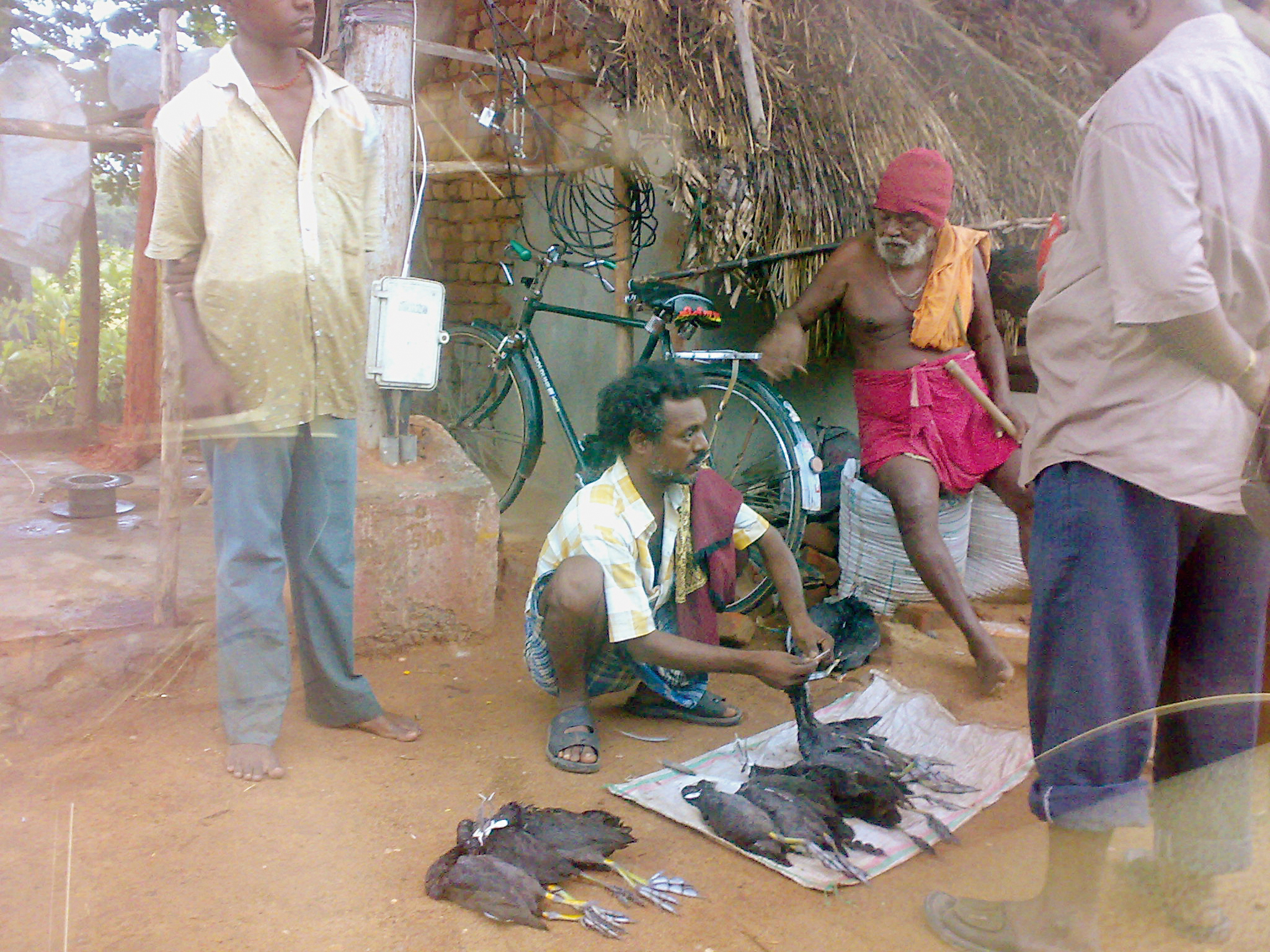 Food laced with the banned pesticide, Endosulfan, is dusted on water plants, which quickly kills unsuspecting birds. Local villagers are blissfully unaware that with this ‘bush meat’ they are ingesting deadly toxins that could kill their own families. Photograph by S. Prasad.

Light at the end of the tunnel?

With poaching on the rise, and the number of birds steadily dwindling, it is only a matter of time before the poaching comes to an end because there will be no more birds left.  It is therefore in the interests of both wild animals and the Narikuravas that alternative employment opportunities be found for them.

Like all other indigenous communities around the world, Narikuravas have incredible insights into the ways of nature - their knowledge of wildlife and their talents could be put to such good use as field staff for the Forest Department. Skilled craftsman, they could also very easily produce bead jewellery and other artifacts through self-help groups  that could wean them away from their deadly livelihoods.

Away from the national spotlight, the fate of both the wildlife of Oussudu and the future of the Narikuravas depends on how quickly we are able to negotiate and implement an effective solution.