India's Forest Advisory Committee is deliberating on granting forest clearance to the Etalin Hydro Project that will involve the devastation of an estimated 2,70,000 trees in the Dibang Valley of Arunachal Pradesh. With the fate of these biodiverse old-growth forests hanging in the balance, four reputed scientists place on record the unique and irreplaceable global value of this ecosystem.

To
The Director-General of Forests,
Chairperson and the Esteemed Members of the Forest Advisory Committee,
Ministry of Environment, Forests and Climate Change,
Government of India.

Subject: Petition to the Forest Advisory Committee re. the Etalin Hydro-Electric Project

To the Esteemed Members of the Forest Advisory Committee,

We would like to respectfully submit the following points for the kind consideration of the FAC and we hope that the esteemed committee will consider these issues before arriving at a final conclusion:

1. UNDERVALUING THE COMMUNITY-FORESTS OF DIBANG VALLEY
One of the interpretations regarding community-managed forests (Unclassed State Forests) outside Dibang Wildlife Sanctuary is that they are ‘degraded’, and therefore of limited value for conservation. However, an independent camera-trap based study cited by your committee (F. No. 8-20/2014-FC) found that these community-managed forests hosted a much higher diversity of mammals than Dibang WLS. Further, using a large sample of camera-trap data, this study also estimated that the landscape of Dibang Valley could harbour as many as 52 (22-144) adult tigers, a large majority of which are likely to hold permanent home ranges in the district’s community forests. Further, and as we have highlighted in our previous submission to the esteemed FAC members, these studies have also found eight different individual tigers and eight individual clouded leopards in these community-managed forests.

Further, the Factsheet (24.vi in F. No. 8-20/2014-FC) considered in the deliberations of the FAC meeting dated 28th February 2017 states that “The land in which the project is proposed is in pristine forests with riverine growth that once cut cannot be replaced”. This assessment of irreplaceability is also corroborated by the Site Inspection Report of the Regional Office, Shillong (dated the 3rd and 4th of December, 2014) within which they state that “The forest area in which the project was proposed is in luxuriant USF [Unclassified State Forests]”. The report further states that “In one of the sampling plots, two trees of Toona ciliata of >800 cms gbh were seen”. As per the Factsheet considered in the deliberation of the FAC, forests with trees of eight metre in girth are irreplaceable; in this light, we request your kind reconsideration regarding the irreplaceability of these forests that may be lost permanently.

2. UNIQUENESS OF BIODIVERSITY OF THE AREA
Multiple sources of evidence point to the outstanding richness of biodiversity of the area, much of which is yet to be thoroughly studied. The biodiversity assessment surveys by the Wildlife Institute of India (WII) that were conducted between the altitudes of 600 to 1800 found 21 mammal species and 230 bird species from the Etalin-Hydro Electric Project study area. Further, a rapid assessment survey in a comparable elevational range (conducted between 28th August, 2015 and 4th September, 2015) near Etalin recorded 24 mammal species over 100 species of birds in just 8 days (Athreya and Sheth, 2016). Further, the basin of the Dibang River has a high degree of endemism. Of the 16 range-restricted species in the Eastern Himalayas, six were found in the study area. WII’s report clarifies that, “Four of these habitat specialists were present along the Dri river while all six species [were found] along [the] Tangon river” (WII 2019: 106).

3. UNDERESTIMATION OF BIODIVERSITY VALUE OF THE AREA
Athreya and Sheth (2016) note that the 24 mammal and 100 bird species that they recorded in a mere eight days are likely to be a serious underestimate. They add that the “actual bird list within a 10 km radius of [the] Etalin-Damro road is more likely to be closer to 300 species including some rare ones like Blyth's Tragopan, Rufous-necked Hornbill, Ward's Trogon, Hodgson's Frogmouth, Beautiful Nuthatch, Wedge-billed Babbler, Mishmi-Wren-babbler, etc”. To put this in context, the entire country of Norway, 42 times the size of Dibang Valley district, hosts around 282 resident bird species. Both Athreya and Sheth’s observations and our own work from a similar elevational gradient to the proposed dam site (400-1500 m. ASL) in Arunachal Pradesh confirm the occurrence of extremely high biodiversity richness in this elevational band. Finally, many researchers have noted that a majority of biodiversity documentation has focused in the western parts of Arunachal Pradesh, with vast areas of Dibang Valley still scientifically understudied, with potential for the discovery of new species. From our long-term onground engagement with residents, We would further like to note that in parts of Arunachal Pradesh, including in the Mishmi Hills, wildlife- and bird-based tourism currently does—and has the great potential to be—a sustainable source of income for communities that manage these forest lands.

In its meeting on 28th February, 2017, the FAC recommended that an internationally credible agency be appointed to conduct multiple seasonal replicate studies on biodiversity assessment as “the current study (EIA) is completely inadequate in this regard”. Following up on this suggestion by the FAC, a four-month single-season study was conducted by WII; a multi-season study, as required by the FAC, is certain to have recorded much greater biodiversity than this single season study. Indeed, the WII report itself states that, “the study was a rapid assessment and only for four months covering only parts of different seasons” and that “...this could not be the true scenario as the study was only for four months and did not cover all season fully (pp. 102)”. The report adds that the study did not contain an adequate assessment of the importance of the project area for wildlife, particularly for migratory species (pp. 102-103). Furthermore, in a three-year camera trapping study conducted by WII, nine adult tigers were camera-trapped in the Dibang Valley. Over a separate four-month survey of 1,552 trap nights, WII’s report concurs that “tiger presence and movement in the project area cannot be completely ruled out based on this few months’ survey, as they are long-ranging species.” We respectfully submit that making a decision based on an incomplete assessment of the extent of impacts on the area’s unique biodiversity, including tigers, would run counter to the FAC’s original recommendation for a full multi-season study. 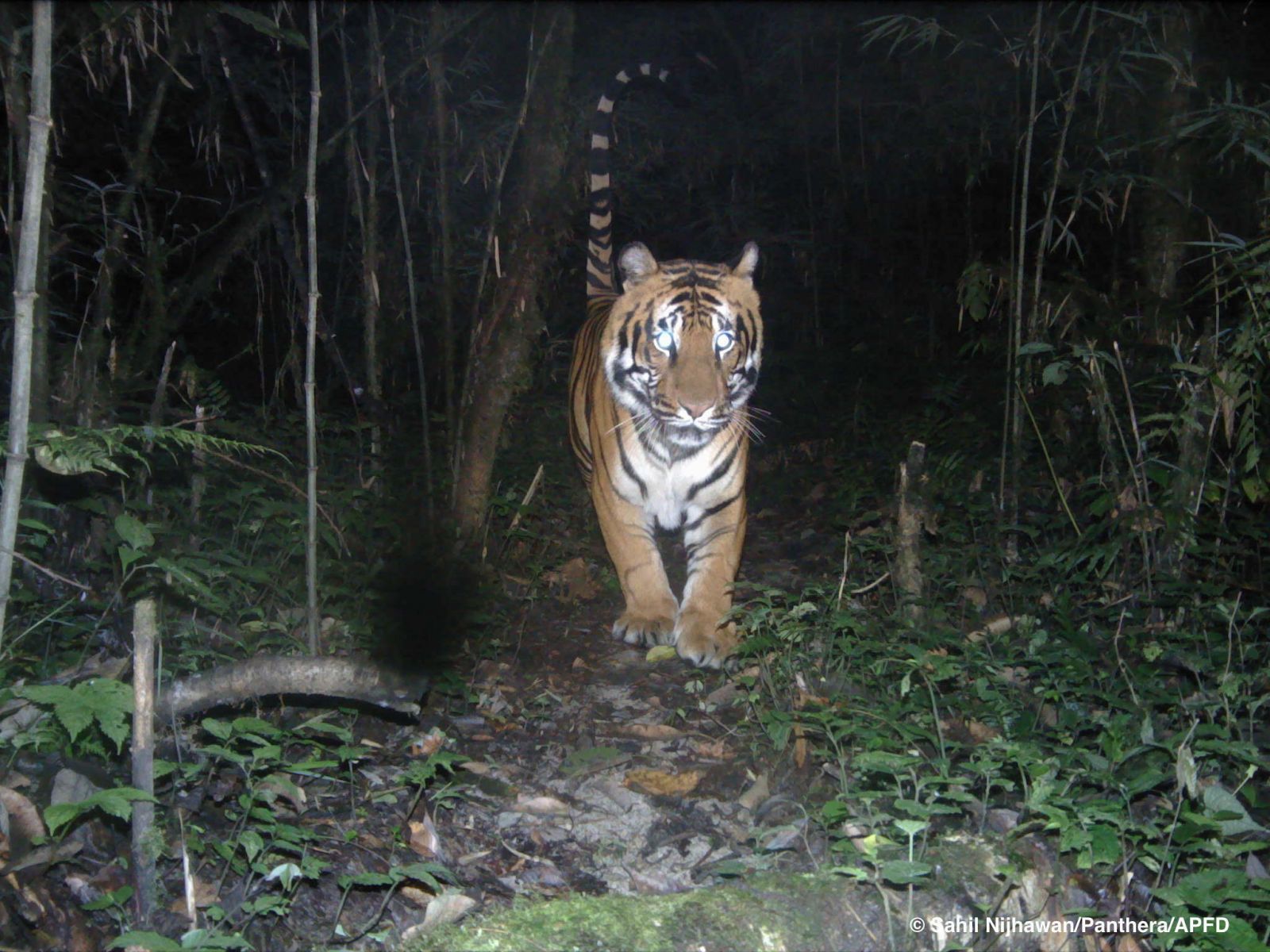 Studies have found that the unclassified, community-managed forests of the Dibang Valley host a higher diversity of mammals than the Dibang Wildlife Sanctuary. Species found here include  tigers such as this one. Photo: Sahil Nijhawan
4. CUMULATIVE IMPACTS OF HYDRO-POWER PROJECTS
In our earlier submission (dated 23rd April 2020), we suggested that there must be a cumulative assessment of the biodiversity impacts of multiple hydro-power projects planned in the Dibang Basin. Most notable of these are India’s two biggest projects – the 3097 MW Etalin and 2880 MW Dibang Multipurpose project. We respectfully submit that the impacts of multiple projects placed in close proximity on the same river limb must be assessed together, because these impacts will be cumulative and not independent. This applies in particular to the breaking up of 3097 MW Etalin project and 22 MW Anonpani project as separate diversion proposals. The FAC, in its letter dated 28th February 2017 contended that “two different proposals for diversion of forest land in favour of same user agency…shall be combined and one comprehensive proposal with total land requirement shall be placed before FAC for further consideration”. The smaller Anonpani project is being built by the same developer mainly solely to provide construction power for the 3097 MW Etalin project. Therefore, the forest land required for the Anonpani project is an integral part of the Etalin project, necessitating that their impacts be assessed jointly. Additionally, we submit that the biodiversity impacts of another proposed project located only a few kilometres upstream from these two projects on the same river (Tangon/Talon limb), the 680 MW Athunli Hydropower Project, must also be considered jointly.

5. COMPENSATORY AFFORESTATION AND THE FOREST (RIGHTS) ACT
In the Factsheet considered in the deliberations of the FAC, the 25 patches identified for Compensatory Afforestation of 1841.32 hectares in Dibang Valley (pt. no. 47) have only been assessed through satellite imagery (from Google Earth), with no indication of whether Gram Sabha consent has been obtained. If this were indeed the case, this would result in non-compliance of the Forest (Rights) Act of 2005, given that forest diversion under the Forest (Conservation) Act, of 1980 requires Gram Sabha consent for "compensatory and ameliorative measures" (MoEF F. No. 11-9/1998-FC, 3rd August, 2009).

6. ADHERING TO INTERNATIONAL COMMITMENTS
India is a signatory to several key international commitments for the protection of biodiversity. Most notable amongst these are the Convention of Biological Diversity (CBD) and Convention on the Conservation of Migratory Species of Animals (CMS) that are relevant to the protection of species found in Dibang Valley. WII’s report (WII 2019:102) states that, “it is evident that the study area and both the rivers provide habitat, also for bird species that visit in different seasons, either for nesting (summer season visitors) or feeding (winter visitors).” Dibang Reserve Forest and its adjacent areas, along with Dibang Wildlife Sanctuary are officially recognised as globally Important Bird Areas (IBAs) harbouring globally threatened range-restricted species. The destruction of the habitat of the many species of migratory birds that utilize the project area is likely to undermine India’s commitment to CMS.

Importantly, India is not only a signatory to the Global Tiger Initiative (GTI), but also its founding member. Peer-reviewed research by the WII scientists, published in Global Ecology and Conservation, concludes that the entire area of Dibang Valley has a genetically distinct population of tigers that “merit the status of a special population unit of high conservation value.” India’s commitments to the Global Tiger Initiative mean recognising that “undervalued tiger ecosystems are degrading and disappearing”, and that “...tiger landscapes are significantly undervalued in national and global agendas” (pp ix).

As wildlife scientists and conservationists working in Arunachal Pradesh, and not least as citizens of India, we respectfully request that the FAC kindly deliberate upon the above concerns prior to making their final decision. We would especially urge you to kindly consider the global uniqueness and value of this land, as well as India’s international commitments to the protection of globally important forests and biodiversity. Indeed, scientists from WII have stated that the “Mishmi Hill ranges are now documented to have more tigers than other designated tiger reserves in Arunachal Pradesh”.

Across government and non-government institutions, there is unequivocal evidence of the local, regional, national and global uniqueness of Dibang Valley. We are at the juncture where it is possible to put forth an exemplary partnership-based Idu Mishmi model of wildlife conservation, not only for Arunachal Pradesh, but as an example for the entire country and the world to follow. We implore you to choose this option. India can once again lead the world as a true ecological champion in this time of unprecedented social and ecological crisis.

Once again, thank you very much for your kind consideration.

Read the initial submission made by Nandini Velho and Umesh Srinivasan to the FAC on April 23,2020, here.