How about travelling to Nagaland to conduct a training programme?” asked Dr. Ashwin Viswanathan on the phone one morning. A Research Associate in the Education and Public Engagement Programme at the Nature Conservation Foundation (NCF), and one of the lead members of Bird Count India, he had been contacted by Dr. Sahil Nijhawan, a Research Associate in the Eastern Himalaya Programme at NCF, for assistance in conducting a training programme for locals in Thanamir, Nagaland on bird monitoring. I instantly agreed.

The Thanamir village council was eager to understand the status of birds in their community-owned forest and if they should alter existing forest management regimes based on scientific information to better protect them. These regimes included hunting bans in various parts of the forest – in some areas, hunting is completely banned and in some seasonally (April-September), while in others, hunting is allowed throughout the year (with species-specific bans). Sahil’s colleague Ramya Nair and her field collaborators were already working with the village council and the Wildlife Protection Society of India (WPSI) to conduct bio-cultural research through ecological surveys, using camera traps and social science surveys. Now it was time to look at Thanamir’s avian life. 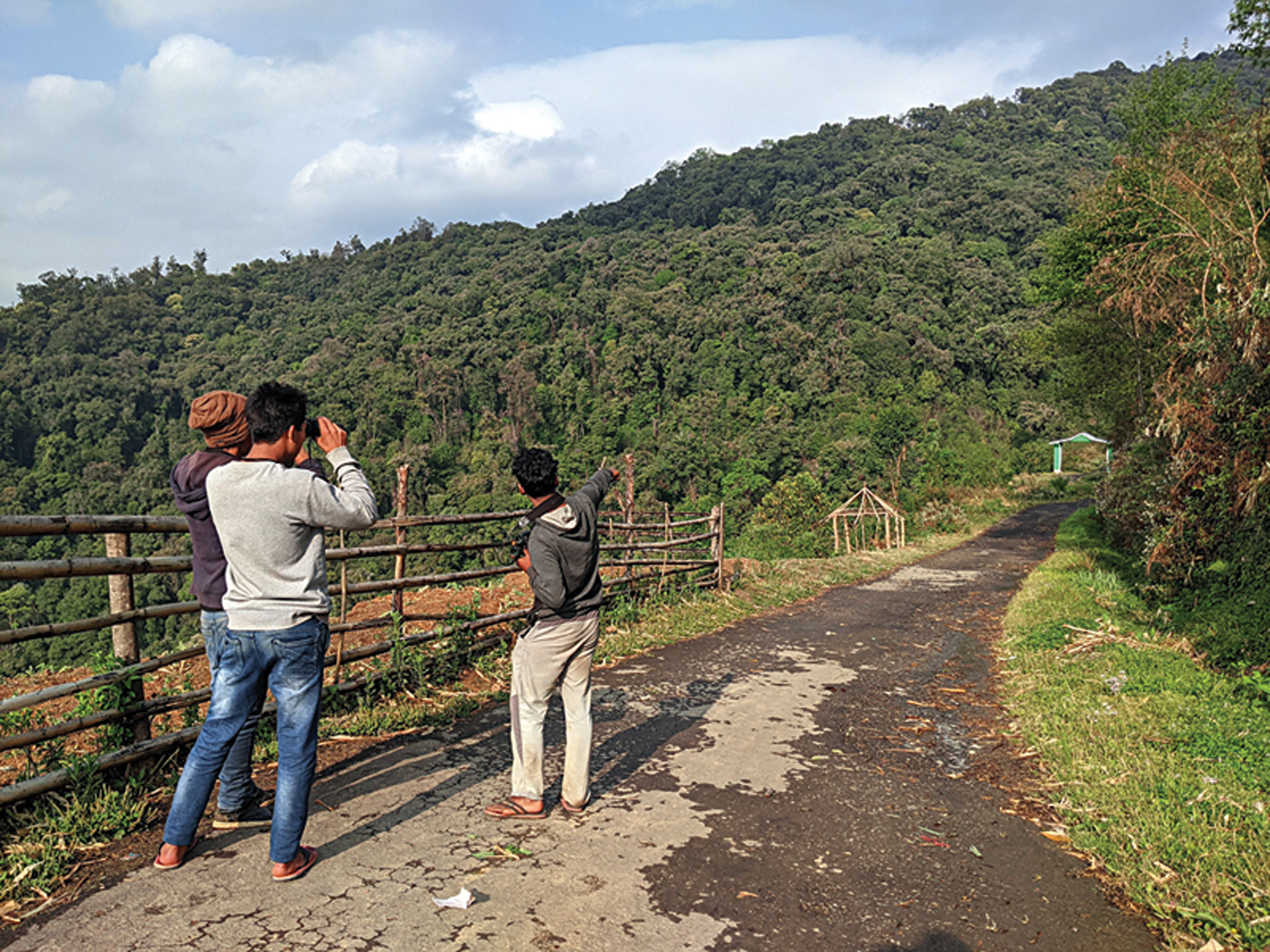 In addition to Ramya, the Thanamir team comprised seven members from the village belonging to the Yimkhiung community: Kiyanmong, Rethsuthong, Alemba, Yapmule, Rethsucham, Hankiumong and Jona. Coming from a community of traditional hunters, the team impressed me with their knowledge about biodiversity, especially birds. From March-April 2021, I helped them learn the theoretical and practical aspects of birding and bird monitoring and in turn, learned much from them. 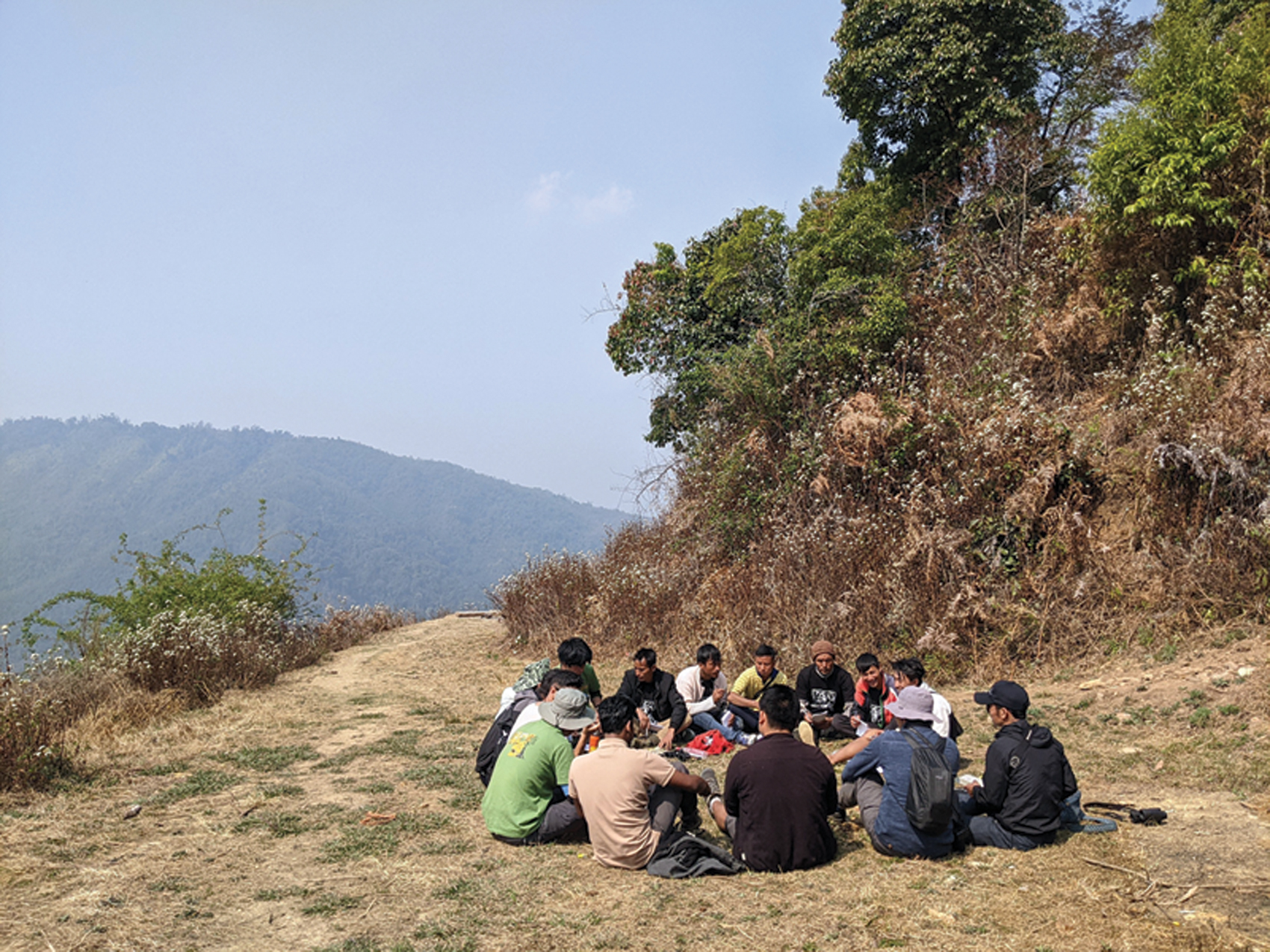 After a birding session, the team would sit together and peruse through field guide illustrations and photographs of the birds they spotted that day. Photo: Ramya nair.

Of Bird Calls And Local Names

I arrived in Thanamir, the last village of Nagaland, on March 11, 2021 and was mesmerised by the stunning landscape. Situated in the high hills at an elevation of 2,060 m., Thanamir is home to a forest of about 65 sq. km. until its border with Myanmar. While these dense forests are majorly oak, the ridge tops and higher elevations host rhododendron and blueberry bushes lightly interspersed with pine. Apart from the forests, the old jhum cultivation had formed scrubby slopes, with older ones regenerating into forests. With such varied landscapes, I knew that birding and training the locals was going to be fun!

We started by getting the team comfortable with using binoculars and field guides during short birding sessions. We would try to identify birds and take notes. The team knew some birds well and even had local names for them. I also helped them identify birds that were unfamiliar to them. 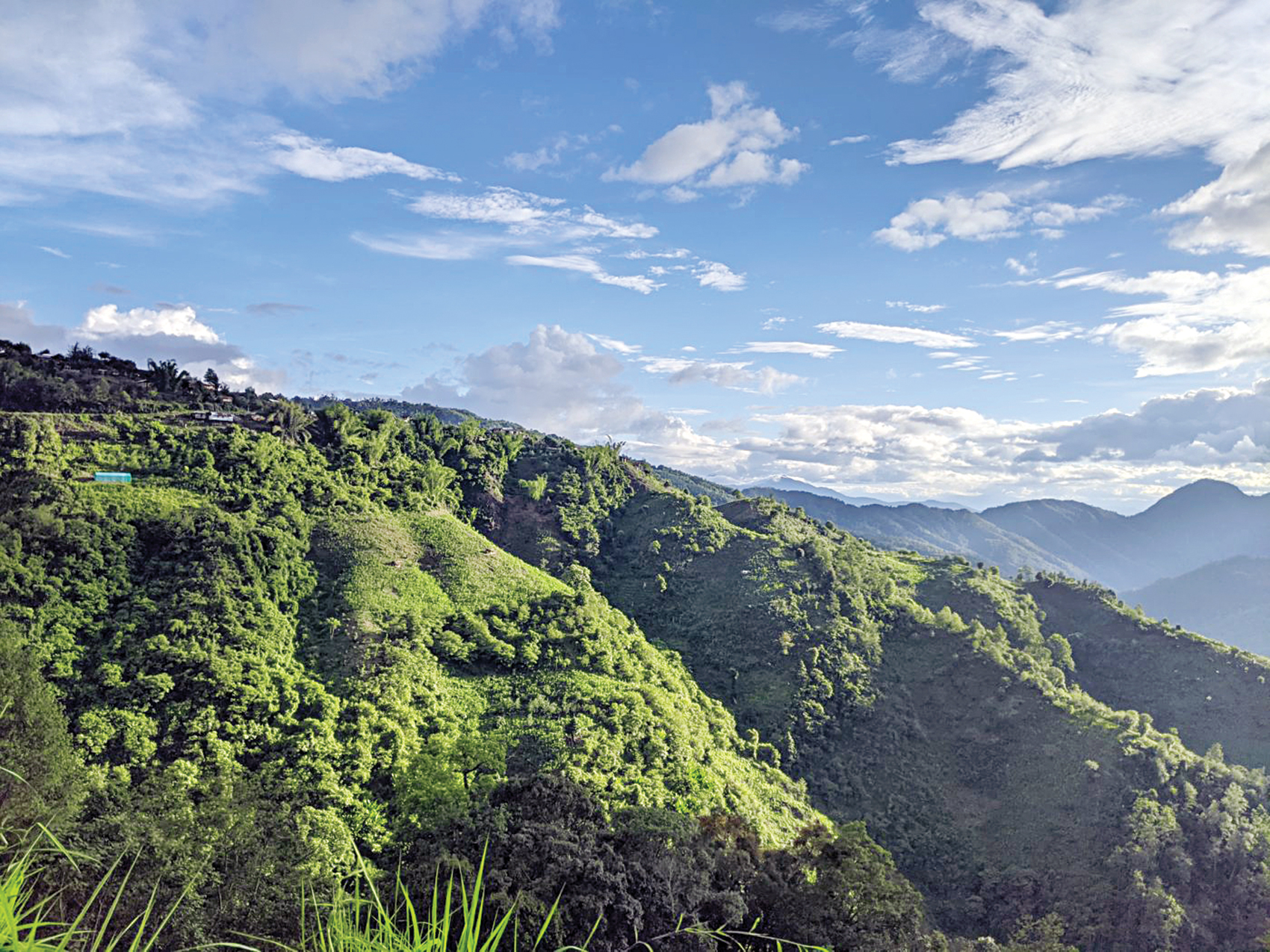 Being new to the traditional way of life and birds in this region, it was a constant learning experience for me. After a birding session, we would sit together and pore through field guide illustrations and photographs of the species we had seen that day and discuss the features and characteristics to help easy identification in the field. If we spotted the same birds again, we would revisit the discussion until everyone could identify that species easily. Thankfully, I had brought along a curated photo booklet  of Thanamir’s birds, because the village did not have electricity for a month and my laptop served no purpose.

Any kind of birding and monitoring activity requires creating a checklist of the species seen or heard. Since team members were not comfortable with writing and remembering the English names of the birds and preferred doing so in the local dialect, Chirr-Yimchunger or Langa-Yimchunger, we decided to let each person make notes according to their comfort. If a bird did not have a local name, we gave it one after consulting village elders. This proved to be an important and useful step to make this training programme a successful one. 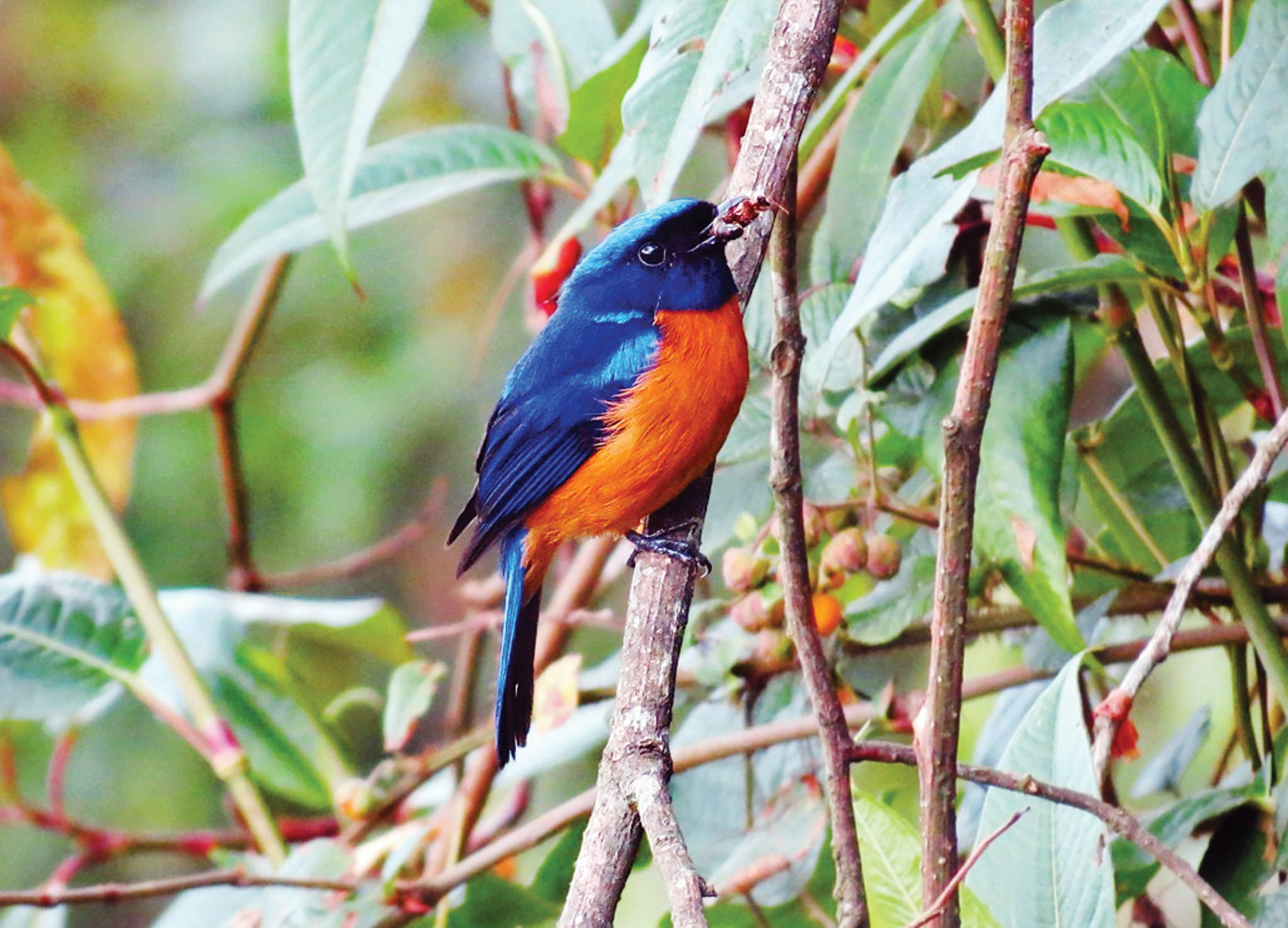 The Rufous-bellied Niltava was a special sighting for the team along with the Black-eared Shrike Babbler, Spot-breasted Parrotbill and Common Kestrel (which was the 200th bird that the group recorded for Thanamir). Photo: Public domain/Soumyadeep Chatterjee.

The local names were also helpful in another important aspect of birding: learning bird calls. Birds such as Crested Finchbill is called Khorbibi because of its call. Similarly, the Green-backed Tit and Great Barbet are called Sin-Sin que-que and Tsango respectively. Such local names allowed us get into the routine of noting and remembering bird calls and soon the team was adept at identifying several birds by their calls!

Avian Wonders of Thanamir
Despite hunting pressures, Thanamir hosts a remarkable amount of birdlife. The forests are home to rare birds such as Hume’s Pheasant, Blyth’s Tragopan, Rufous-vented Laughingthrush, Himalayan Owl and Hodgson’s Frogmouth. Apart from the rare birds, it is one of the best places to see a wide variety of bulbuls and blue flycatchers. The scrubby slopes are equally rich in birdlife. They are great sites to spot Crested Finchbills, Grey Bushchats, Black-throated Prinias and even Spot-breasted Parrotbills. The chorus in the morning is nothing short of a concert; Large Nilatavas, Lesser Shortwings, Sibias, Sunbirds and Fulvettas fill the morning with metallic notes while the Barbets and Cuckoos provide a background score. Birding here in this beautiful and remote part of Nagaland is a completely different experience.

As the identification improved, we made sure that creating systematic bird checklists became a habit. Along with identification, essentials such as date, time, location, and observer names were mandatorily recorded. We also introduced tally marks to record bird counts. With regular practice, the team grew confident and it was time to consider placing transects to monitor the birds. We explored new trails for birding including Mount Saramati (the tallest peak of Nagaland).

During this time, the ‘Dibang team’ – Sahil and his Idu Mishmi colleagues (with whom he has been working for a decade in Dibang Valley, Arunachal Pradesh) joined us in Thanamir. I planned fun joint classroom sessions for both teams along with birding sessions and new explorations. We discussed bird identification, bird families, good birding practices in detail and lastly, the theory behind transects and how it aids in monitoring birds. We also discussed how trained birdwatchers can act as guides, which would enhance their income in the future.

Ramya and I introduced the team to the eBird app as a tool to make lists and monitor the birds in Thanamir and several team members registered on the app. After the Dibang team’s departure, we set out to mark transects across different habitat types and hunting regimes and conducted systematic birding sessions there.

After the training programme, the team recorded the Rufous-necked Hornbill (right), Hodgson’s Frogmouth and Chestnut Munia. They had begun listing their findings on eBird, which soon resulted in Thanamir becoming the third-best birding hotspot in Nagaland on the app. Photo: Hirak Mazumdar.

On April 13, the team conducted a bird transect independently without Ramya and I, and returned with a solid and detailed checklist. I was elated that my purpose at Thanamir had been achieved! We ended the programme having recorded over 200 species in Thanamir. Our efforts of over a month and 10 days also made Thanamir the third-best birding hotspot in Nagaland on eBird.

It has been 10 months since the birding programme and the team has been regularly submitting checklists on eBird, expanding the birdlist and have even found unrecorded bird species for the region.

Similar training programmes in other remote areas in the country can allow interested local birders or bird enthusiasts to contribute to the overall science, enhance income and aid in conservation. I look forward to seeing local communities using their inherent knowledge of their region in such creative, wonderful ways.

Kaushik Sarkar is a wildlife biologist in the making. He has finished a Masters in Wildlife Biology and Conservation from the National Centre for Biological Sciences, Bengaluru, and is interested in avian ecology. This work was part of his tenure as a Project Assistant at Bird Count India. He currently works as Executive-On-ground Projects at The Habitats Trust.