Burmese Bush-tit!” called out our guide Htay Ngwe, triggering a frantic sprint to see the last of the endemics of Mount Victoria. We had spent half a day scouring the favoured pine tree habitat of this tiny “masked bandit” bird: turned out he had only heard, not seen it. We threatened to confiscate his lunch! In the event, our patience was eventually rewarded with one sighting and record photos of this charismatic, endemic bird that rounded off our must-see list for Mount Victoria.

We were in Myanmar, a country with unbelievably varied habitats: to the west, the north-south hills (the Naga and Chin Hills and the Rakhine range) are an extension from the Himalaya, to the east is the Shan plateau while in the middle, the Ayeryawady (Irrawady) meanders its way to the Indian Ocean. Our destinations were Mount Victoria in the western hills, on whose slopes we hoped to rack up a sizable count of typical East Himalayan species, the Ayeryawady itself, Lake Inle in the eastern plateau and finally the surrounding lower altitude hills at Kalaw.

We landed in Yangon and headed straight from the airport to Hlawga Park on the outskirts. A Scarlet-backed Flowerpecker showed off its flaming scarlet in bright sunlight, followed by the dainty Racket-tailed Treepie, looking more like its namesake drongo than a treepie. A couple of dozen other species we were familiar with from India kept us busy until it was time to catch our flight to the sleepy airport in the historic central town of Bagan. 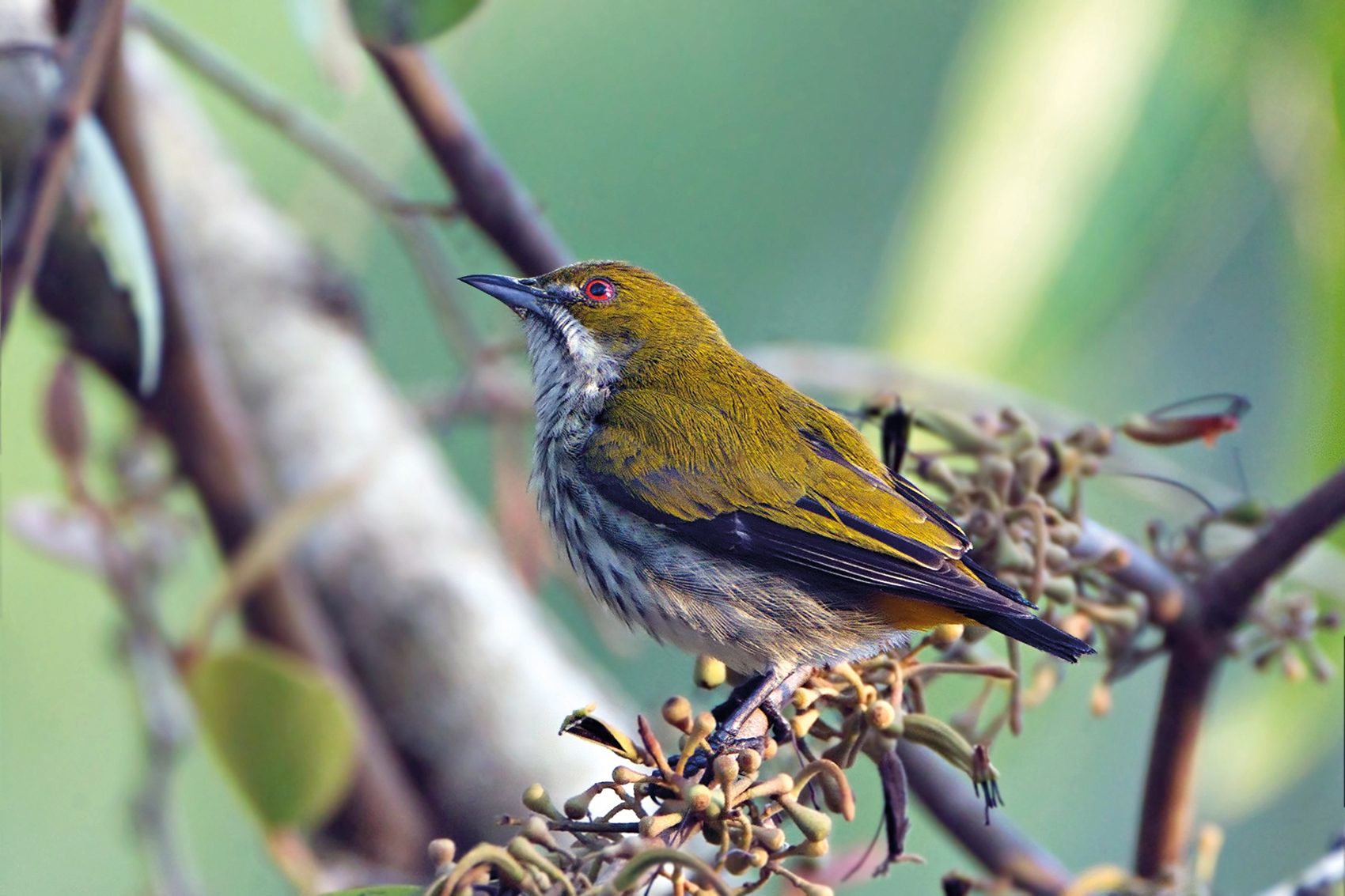 Tick Off the Birds

The rising morning sun gradually lit up the ancient pagodas all around. Hot air balloons above created a near-magical backdrop to morning birding in the dry scrub area around Bagan, an archetypal habitat for endemics. The White-throated Babbler, Ayeyarwady Bulbul and Burmese Bushlark were photographed with glee, but the highlight was undoubtedly the relatively rare Jerdon’s Minivet, showing off its orange breast in bright sunlight! With four of the 10 birds endemic to Myanmar already ticked, the Burmese Shrike, Burmese Collared-dove, Rufescent and Grey-breasted Prinias rounded off a list of some 20 odd species, before we found ourselves driving west across the Irrawady into the mountains.

We stretched the five-hour drive to Mount Victoria out to eight, birding intermittently along the way. A Yellow-vented Flowerpecker gave us a “bottoms up” to enable us to admire its bold stripes and yellow bottom. As the plains gave way to undulating hills, a flock of noisy Blossom-headed Parakeets squabbled for the same branch with two pretty leafbird species, the Blue-winged and Golden-fronted. When they finally settled, they were joined by Grey-headed Parakeets, leading to transitory chaos and Red-breasted Parakeets that finally crossed overhead to complete a trio of the parakeet clan.

The sun rose slowly above the clouds and painted the Nat Ma Taung National Park into varying shades of red and orange: we were close to the top of Mount Victoria at 2,500 m. and the spectacular sunrise and many photographs were well worth the 5 a.m. start in the biting cold to reach there at daybreak. We were after the iconic Mount Victoria Babax, whose loud call belied its shy and secretive nature, obliging us with just a brief sighting and record photos of its distinctive striped face and body. A Chestnut-vented Nuthatch exhibited its vent to the photographers with its endemic cousin, the White-browed Nuthatch soon following suit. Yellow-breasted Greenfinches posed in the morning sun and distracted us from our breakfast. It was a moment of pure joy when a Rusty-fronted Barwing, which had been playing hide and seek in the undergrowth, suddenly decided to pose in bright sunlight. A rare Brown-capped Laughingthrush suddenly popped up close by. One fruiting tree yielded three barbets (Great, Blue-throated and Golden-throated) while Chestnut-flanked White-eyes gorged on a nearby flowering one. A single tree was the evening hangout for several handsome dudes: Red-faced Liocichla, Striped Laughingthrush, Silver-eared Mesia and Crested Finchbill.

Say no to Playback
Playback refers to the use of birdsong recordings to draw out rare and elusive bird species. Earlier limited to scientists or to a few serious birders, it has now grown into a widespread trend. Some birders use it to complete their birdwatchers list, tour guides to earn a hefty tip from wide-eyed tourists and wildlife photographers another award-winning picture. Research suggests that this practice has substantial negative impacts on bird species. Responding to call-playback can be harmful as it can cause stress, serious expenditure of energy and pair-breakups in bird species, leading to disruptive social systems. Call playback during breeding season can distract adults from courtship, territory defending and other tasks pertinent to successful breeding. 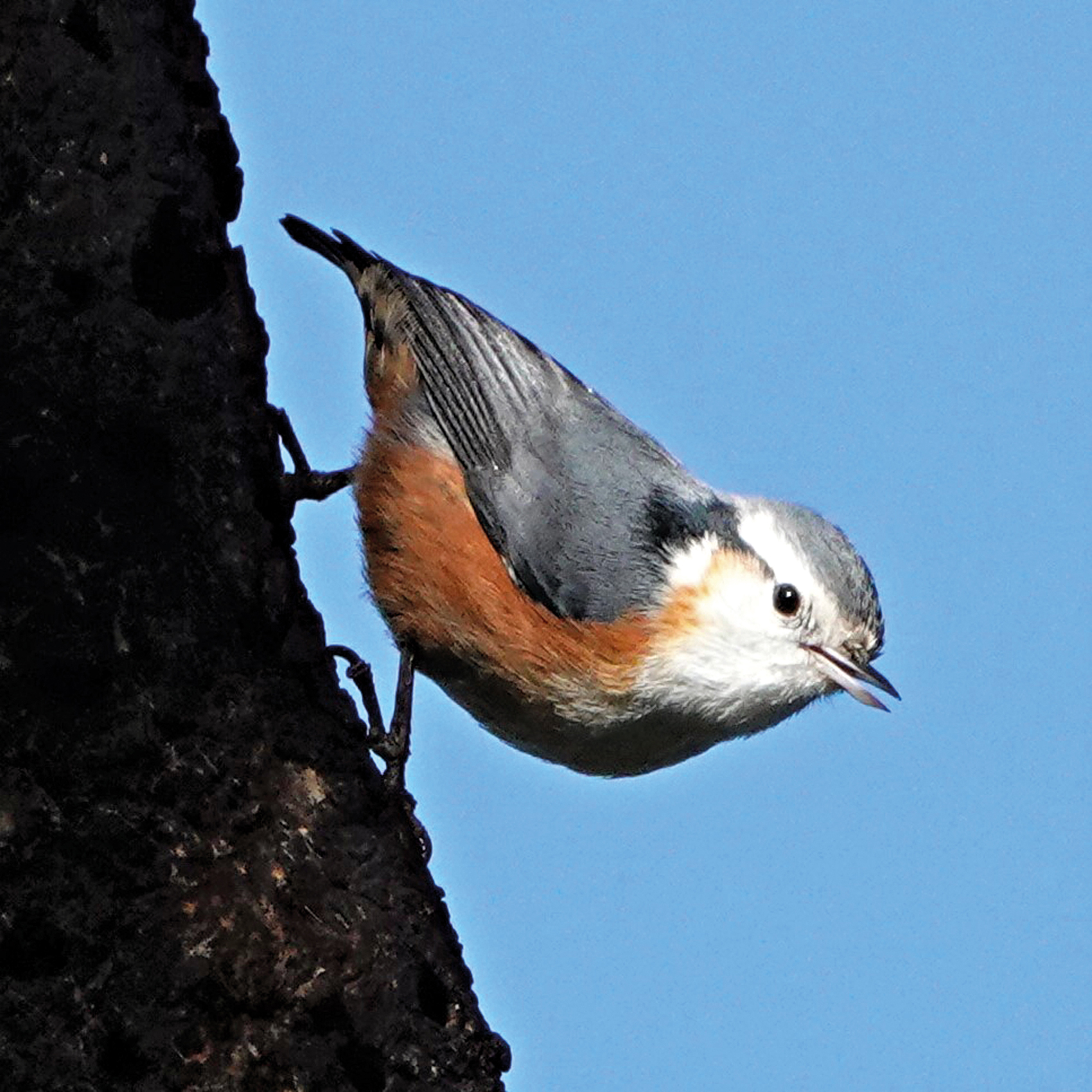 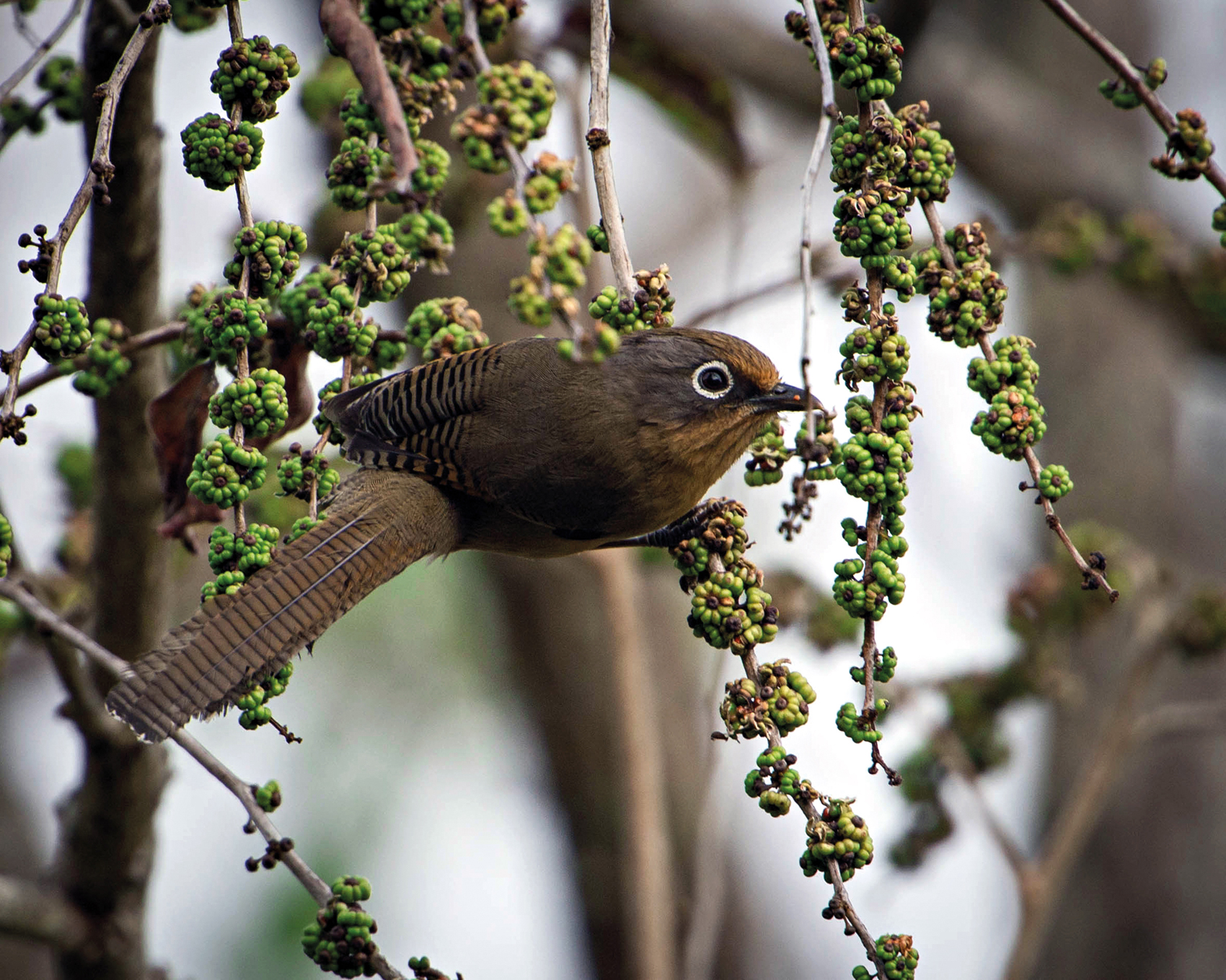 The next morning, a Crimson-breasted Woodpecker chose to greet us in the morning sunlight, while a group of 25-30 Eyebrowed Thrushes took off from a nearby tree. Our attempt to differentiate it from the Grey-sided Thrush, also on the same tree, was interrupted by a Black Eagle swooping directly overhead. Streak-breasted Scimitar Babblers and Red-faced Liocichlas waved us goodbye before we discovered it was time for the drive back to Bagan. On the way down, we had the privilege of an unscheduled appointment with the princess herself: the exquisite White-rumped Falcon with her gorgeous rufous head that rendered her far prettier than the male (a rare exception among birds!). Her Majesty allowed us just enough time to photograph her before curtsying off. We also photographed the Neglected Nuthatch, now the Burmese Nuthatch.

Want to know the guaranteed cure for all types of stress and anxiety? Go birding offline without a mobile or internet connectivity for four days, as we did!

Back in Bagan, the morning sunlight turned the red bricks of the ancient pagodas (there are 12,000 of them in Bagan alone) into deep ochre: we were of course interested in the dry scrubland in between them, given a lifeline from developers on account of the intervening ancient ruins and heritage status. A metallic cackle left us scrambling excitedly to spot three shy, endemic Hooded Treepies, with their handsome black heads and grey bodies. A pair of Laggar Falcons, typical predators in this dry habitat, were masters of all they surveyed from their nest atop the crest of a pagoda. When we saw the Brown Prinia, the last remaining endemic bird of Bagan on our list, we were ready to head off for a lazy lunch overlooking the sun-drenched banks of the Irrawady. 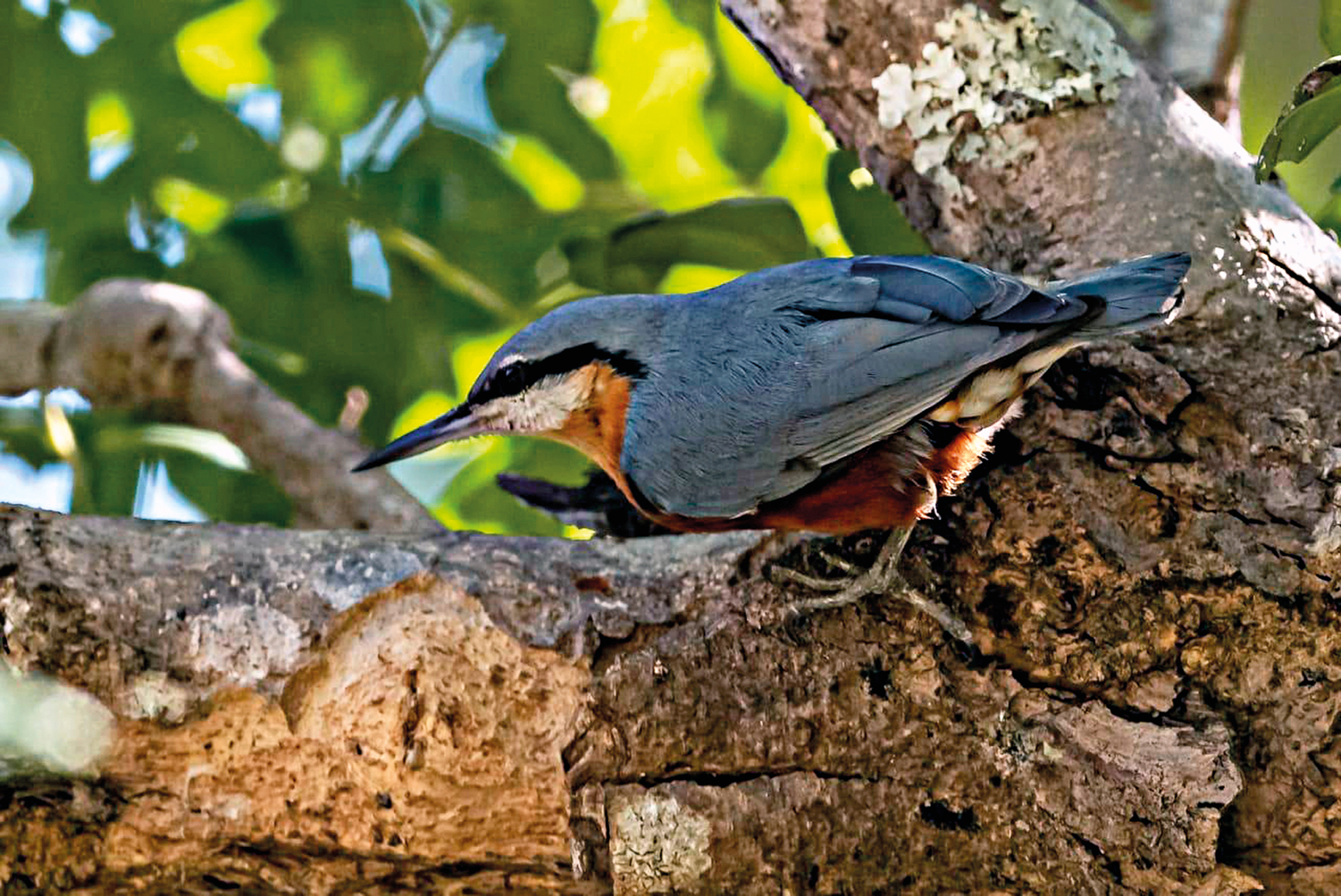 The Burmese Nuthatch Sitta neglecta, whimsically also referred to as the Neglected Nuthatch, is similar to the Chestnut-bellied Nuthatch, though their ranges barely overlap. Males can be told apart by a white patch extending from the throat to the cheeks. Photo:P.B. Balaji.

Birding along the Irrawady

We sipped tea to ward off the soporific effect of the diesel motor and the soothing sound of the Irrawady as it lapped at our boat in the afternoon sun, and marvelled at the ancient temples from the 12th century that dotted the shores. We would have loved to see the freshwater Irrawady dolphin, but we were told it is seen only in the river’s northern reaches. We stepped out periodically on to the riverbank where sandy shore and grass specialists like the Yellow-bellied Prinia, White-tailed Stonechat, Sand Lark and Striated Babbler reminded us how nature has beautifully adapted each bird to its unique habitat.

The wind chill had us hurriedly reach for our pullovers, despite the bright sun and cloudless sky above. Having flown from Bagan to Lake Inle, we found ourselves on a motorboat on the picturesque lake, flanked on both sides by hill ranges. Walking on a mound among the marshes was like watching a play: the star actors were the Jerdon’s Bushchat and Chinese Grassbird with Yellow Bitterns, Pond Herons, Intermediate Egrets and Common Snipes forming the supporting cast. The vast expanse of the lake was dotted by an audience: Common Coots, Brown-headed Gulls and Little Cormorants. Three myna species (Crested, Great, Collared) were the props and Eastern Marsh Harriers directed the play from above with an iron hand, tolerating no indiscipline amidst the ranks. A play much enjoyed by us!

Our final day was at Kalaw (1,300 m.), a former British hill station replete with quaint cottages and the obligatory golf course: sounds familiar? Once we left the boring pine plantations (again familiar?) with just a Japanese Tit sighting, true broadleaved evergreen forest birding began. We thought the White-browed Scimitar Babbler had overdone her eyebrows, but the rare White-browed Laughingthrush easily outdid her. The Black-backed Sibia was the local ‘soup of the day’ here, keeping up a day long metallic call quite indistinguishable from other sibias. A Crested Goshawk in flight was identified by the white mini skirt-like feathers at its tail base. Seeing the Burmese Yuhina, one of the last of Myanmar’s remaining endemics on our to-see list, deserved a special celebration. Warblers are mostly frustratingly unidentifiable, but Bianchi’s Warbler was an exception with its yellow eye-ring, grey head and typical call. A Silver-breasted Broadbill perched stationary for quite some time, fulfilling a decade-long desire to see and photograph one. Remember, our group leader Nikhil Bhopale had us on a strict no call playback birding policy (see box on page 90), which makes birding more challenging, but far more ethical and satisfying. A flock of Black-collared Starlings on a field rounded off a near-perfect day, with a close-up of the Spectacled Barwing literally providing us ‘one for the road’ before we boarded our flight back to Yangon.

With a count of almost 250 species – including nine endemics – without using bird call playback even once, Myanmar was a fantastic birding experience. Book your tickets! 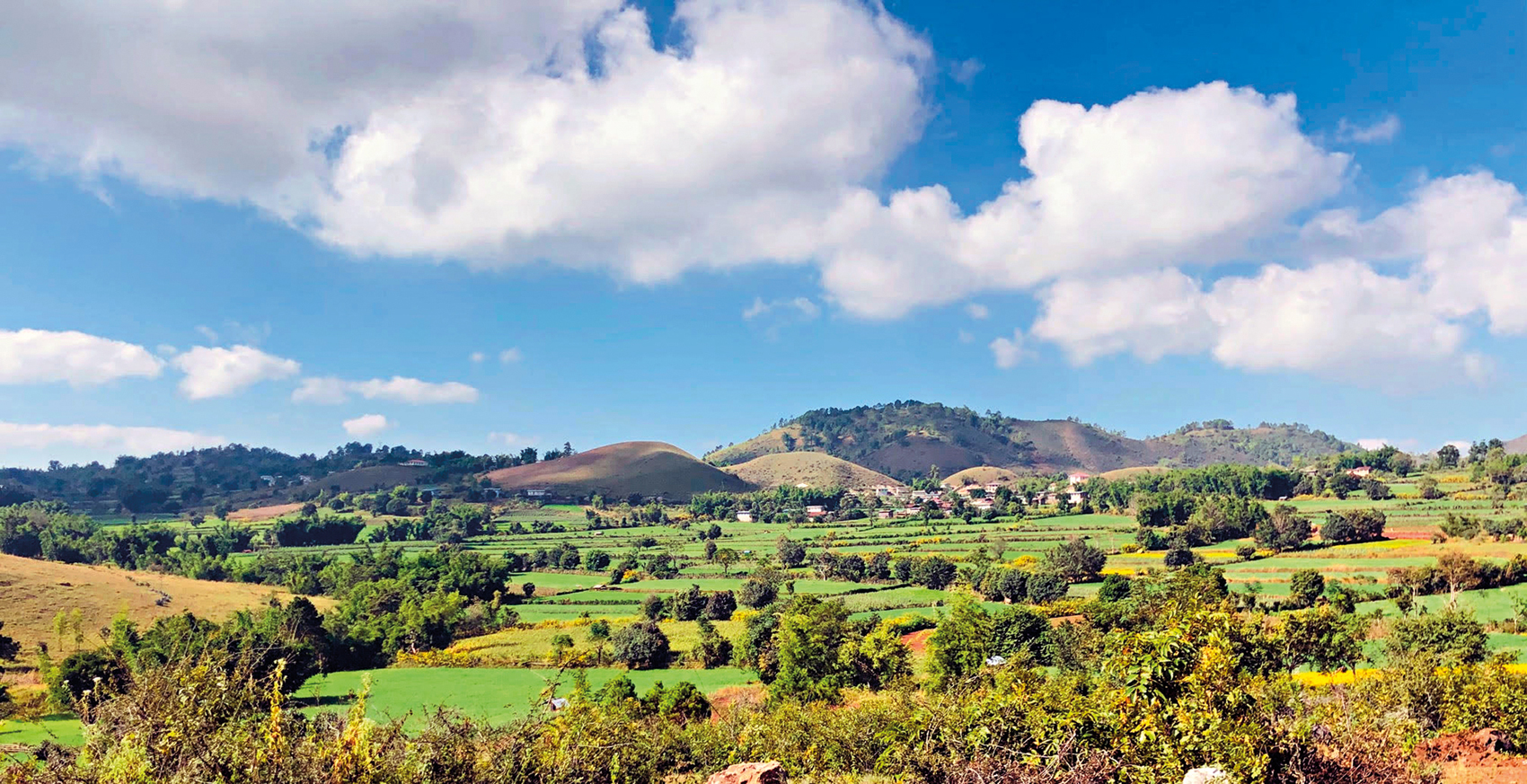 A panorama of the picturesque rolling, lower altitude hills in the eastern Myanmar town of Kalaw, a popular birding and hiking destination with a high volume of endemics. Photo:Shelly Zohar/Public Domain.

How to Get There
Myanmar (erstwhile Burma) is in Southeast Asia. For much of the latter half of the 20th century, post its independence from Britain in 1948, the country was under martial law. Today, Myanmar is a democratic country open to travellers and popular with backpackers and birders. With more than 1,100 birds that occupy varied habitats, the country offers myriad opportunities for birders. There are also direct flights from Delhi and Kolkata to Yangon. Visitors from India can travel to Myanmar even by road, directly from Imphal in Manipur. Local taxis will ferry you from Imphal to Moreh village (India). One can then cross over to Tamu village (Myanmar) on foot and catch a bus to Mandalay, from where other areas in Myanmar are well connected.

Dr. Ram Gopalakrishnan loves to get away from his medical practice to go birding in remote locations. By writing about them, he hopes to stimulate interest in nature conservation in this era of vanishing natural resources and climate change.