Beasts of a Different Stripe

"Tigers, except when wounded or when man-eaters, are on the whole very good-tempered.”

Over the past few years, India has witnessed a surge in the frequency of human-wildlife conflict in its varied dimensions. Attacks on humans by large carnivores inevitably garner the most attention and Forest Department officials are often pressurised into a frenzy of reaction by the public and local politicians. When attempts to address a conflict situation are unsuccessful, they can culminate in acts of violence and outrage by the public – almost always directed at the Forest Department. Many a time the conflict animal is also cornered, killed and mutilated.

An increase in cases that ‘go awry’ has a detrimental impact on a species’ survival prospects in the long run. When the species involved is a national icon like the tiger, things get even more complex.

Since the 1970s, India has made relentless efforts to protect the tiger – not just as an icon but as an umbrella species, an apex predator that ensures the well-being of entire ecosystems that it resides in. A party to the Global Tiger Recovery Programme endorsed in 2010, which aims at doubling the world tiger population by 2022, India surpassed its set goal of 2100 tigers in 2014 itself. Tiger numbers have continued to rise, but with less than five per cent of the country's landmass remaining as the tiger’s last refuge, an increase in breeding populations can only translate into escalated human-tiger conflict.

Tigers involved in conflict with humans are invariably portrayed by the mass media as vicious, bloodthirsty beasts that pose a serious threat to human survival. Such slanted, sensationalised narratives that tarnish the creature’s public image have foreseeable long-term negative impacts on tiger conservation and thus on the species’ very survival in India. News of human-tiger conflict is widely appealing not just due to the tiger's brilliant and formidable appearance, but also because somewhere deep down it reminds us of our 1.8 million year old wild ancestral relationship: of man as prey!

Tigers have preyed upon humans opportunistically as long as we have shared space. A few of them down the millennia have become – almost obligate – human predators, or man-eaters as we call them. But what is a man-eater? And how can one distinguish between intentional man-killing or man-eating incidents and mere accidental encounters? To understand this we must first explore tiger behaviour and some of the drivers of human-tiger conflict. 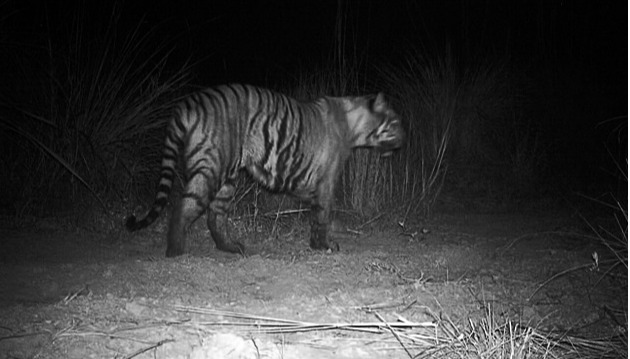 A camera trap photo of a tigress that travelled over 200 km. southwards from Pilibhit Tiger Reserve to the swampy banks of the Ganga, just 30 km away from Kanpur, in February 2015. COURTESY: WTI

Tigers naturally disperse from their natal territories to establish their own home ranges as they come of age. They may also move in search of more prey-rich areas, or in the quest for a mate. Old individuals may also gradually be pushed out of their territories by younger and stronger adversaries.Left to itself, a healthy breeding tiger population will inevitably spill out of a Protected Area into adjoining patchy and unprotected forests, which sometimes provide prey-rich habitats with species like chital, sambar, nilgai, wild pig, blackbuck and hog deer. Within the rest of the tiger distribution range outside protected forests, domestic and feral livestock are also consumed. Artificial habitats like sugarcane belts, which also provide good cover and prey, act as extended forests for large carnivores.

Many of these areas are today classified as territorial forests and are also units of functional tiger corridors.With a lot of unprotected habitat being destroyed, fragmented and converted to human-use in the recent past, this is largely where tigers and humans face-off, sometimes with fatal results.

Consider the Dudhwa-Pilibhit landscape in Uttar Pradesh, where Wildlife Trust of India (WTI) runs its Terai Tiger Project in association with the U. P. Forest Department and with support from the U.S. Fish and Wildlife Service. With a little over 110 tigers and over a thousand villages huddled along its jagged periphery of disconnected forest patches, the landscape has witnessed 114 attacks by tigers on humans since 2002. Of these 83 have resulted in human deaths – but in very few of these cases have the tigers even consumed human flesh, let alone been true man-eaters.

Tigers commonly prey on livestock outside Protected Area boundaries. As they disperse and go on to establish their own home ranges or are ousted by younger, stronger tigers, they may enter unprotected areas that could also include artificial habitats such as sugarcane belts and fields. Photo Courtesy: Augustine Prince

Man-eaters or man-killers are much like the spine-chilling human serial killers we hear about: the stuff of good stories, frightening, and extremely rare. In reality, few tigers that for a variety of reasons find themselves hunting in human-use areas actually kill humans – and even if they should in the course of chance encounters happen to do so, few stick to the chronic killing of humans. Most return to the forest to hunt their natural prey, sometimes even after extended forays into human territories.

Take, for example, a recent case from the Pilibhit Tiger Reserve. In early August this year, about 30 km. from the Mala Forest Range, a young male tiger encountered and killed three men amidst vast sugarcane fields. These fields had ample waterbodies and at least four documented species of wild ungulates. From the first two human victims the tiger consumed sizeable portions. It also killed a nilgai and a buffalo calf, though the Forest Department disposed of both carcasses to prevent the tiger from being poisoned by locals. Tranquilising and trapping attempts were made, but failed as the tiger shied away from the faintest human presence during the month-and-a-half-long operation. Subsequently, people were kept out of the area as a precautionary measure, allowing the tiger to gradually move back into the forests of Pilibhit.

In another instance in October 2014, an adult tigress travelled over 200 km. southwards from Pilibhit to the swampy banks of the Ganga, opposite Kanpur city. She thrived on feral cattle, nilgai and hog deer, evading all capture attempts for nearly six months, after which she began moving northwards to Sitapur and disappeared. Monitored through her pugmarks and infrared camera traps, she appeared to be a healthy tigress, completely active at the dead of night and utterly shy of human presence. In an earlier case in 2012, a sub-adult male had been caught on the outskirts of Lucknow city and released back into Dudhwa National Park. He had grown into a full-sized male by 2015, not coming into conflict with humans again after his release.

The Infirm and the Inexperienced

It is believed that physically impaired or infirm tigers that fail to hunt fleet-footed wild prey are most likely to be inclined towards easier prey like livestock, and sometimes humans. In his observations on man-eaters, Jim Corbett wrote of a number of tigers and leopards that bore grievous injuries from porcupine quills, with humans becoming the prey of choice out of compulsion.

On August 31, 2016, a tiger was captured by our Rapid Response Team (RRT) and the U.P. Forest Department at the southern tip of the Mailani Range of the South Kheri Forest Division. It had killed eight people, including two minor girls, between January and August 2016. Only the seventh victim was consumed. As in the previous three kills, villagers gathered swiftly and scared the tiger away to recover the victim’s corpse. In each of the last four kills, many of them spoke about how the tiger stubbornly stood its ground beside its kill, in one instance even following them for sometime as they carried the victim’s body away.

After the tiger was successfully tranquilised by our RRT in the forest patch around which it was hunting, a quick physical examination revealed key missing pieces to the story. This three-to five-year-old male had a broken canine and severe cataract in his right eye. He had probably been pushed out by resident tigers from the richer forest patches, after which he survived by eating cattle and other livestock and feral animals. By this time his cataract had perhaps begun obstructing his sharp binocular vision and he began mistaking crouching humans as prey and attacking them. With extended bouts of hunger, he would have soon realised that these creatures could also be hunted and eaten.

Top An aerial photo of a nilgai killed by a tiger in a sugarcane field near the Pilibhit Tiger Reserve in August 2017. Photo Courtesy:Mayukh Chatterjee/WTI

This ‘theory of infirmity’ can also be extended to individuals with poor experience in hunting, like cubs that have been separated from their mother too early. The case of the man-eater ‘Mallu’ from the Deoria region of Pilibhit exemplifies this. When Mallu was captured he had no deformity of any sort that could have impaired his skills at hunting fleet-footed prey. He seemed more like a young, inexperienced tiger who had discovered and decided to stick to fast food!

Mallu had killed seven people by the time he was captured on February 11, 2017. He had begun attacking and killing humans back in November 2016, but the nature of his attacks at the time showed no clear intent and little finesse. Towards the end of his free-ranging tenure, however, he made four attempts on human lives within a month, all when victims were sleeping on cots inside mosquito nets, and despite livestock being present on the scene as an alternative. He had grown audacious by then, and adept at lifting people from their homesteads; 45-year-old Manjeet Kaur, the only survivor of his attacks, recalled how he had refused to back away even as her family members screamed, beat at him with sticks and pelted him with stones. He even made a bold second lunge at her, injuring her grievously before disappearing into the night.

Several such meticulously documented cases in the Dudhwa-Pilibhit landscape strengthen the understanding that man-eaters are a rarity, and that many tigers that are not man-eaters can and do occasionally consume human flesh. Thus, every instance of human flesh consumption does not give birth to a recalcitrant man-eater; only detailed information gleaned from pugmark dimensions, camera trap and other photographs, situational details of attacks, nature of wounds inflicted on the victims, and regular movement patterns during conflict situations can help piece together case studies, and possibly through them the motive of the animal. 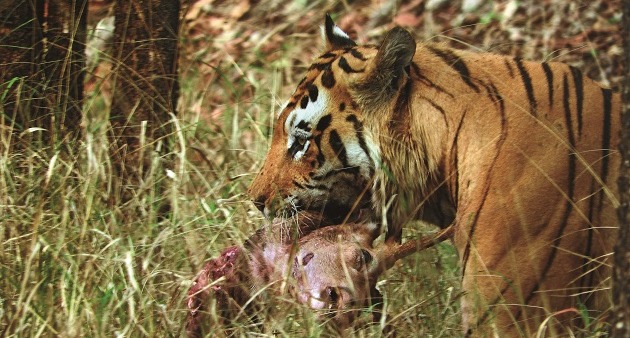 Such insights can greatly inform conflict management strategies and decisions. To ensure detailed documentation and aid in conflict management on the ground, communities can be integrated into the process in the form of well-trained and equipped Primary Response Teams (PRTs), such as those formed by WTI in Uttar Pradesh. These PRTs and the specialised RRTs, working in unison, can constitute a major conflict mitigation support to state Forest Departments across tiger landscapes in India.

Finally, positive media engagement at multiple levels is crucial to ensure that factually correct, less sensationalised media reports are published, and that the tiger’s long-term image is not caricatured into that of a white-fanged creature with bloodshot eyes, out to get you and me.