The Arannya Environment Research Organisation (AERO) aims to bridge the growing disconnect between youth and their environment.

Though the smallest state in India, Goa contains a rich biodiversity and and is home to a variety of ecosystems – from the forests of the Western Ghats to the beaches of the Konkan coast. The first human inhabitants created a culture here that paid close attention to nature: to the seasons, the tides and the other species they shared the land and water with and depended on for survival. There has been a huge shift in the past few decades towards ‘developing’ this semi-agricultural state in a manner that destroys nature, and with it, younger generations have lost touch with their environment. 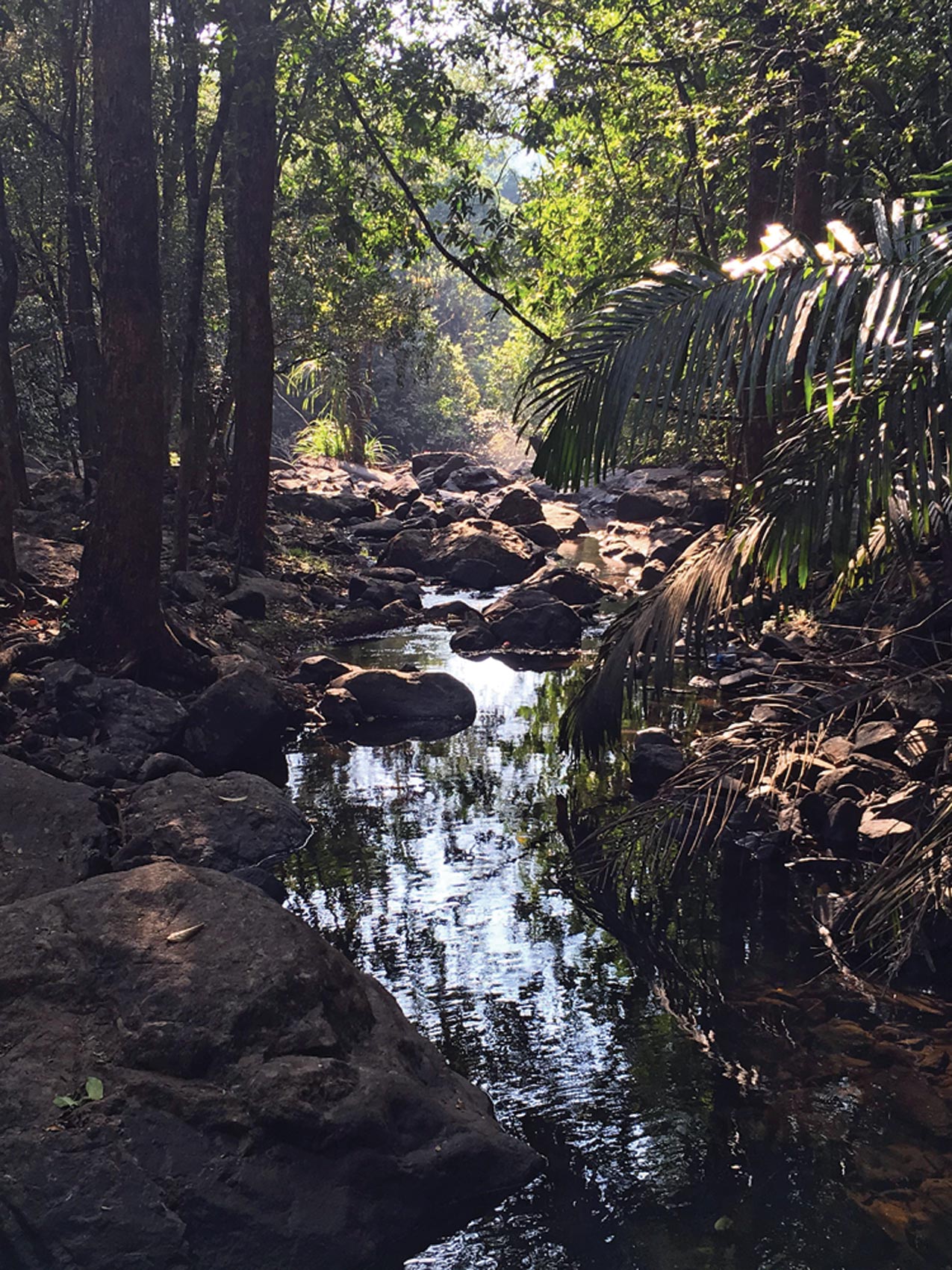 Goa’s forest cover extends over 30 per cent of its landmass. The tiny, biodiversity-rich state is home to six wildlife sanctuaries and one national park. Photo: Public Domain/Shefali Kumar.

The Arannya Environment Research Organisation (AERO) aims to bridge this growing disconnect between youth and their environment.

The idea for Arannya grew out of co-founder Harshada Gauns’ experiences while doing her B.Sc. from a local college in Sankhali, a village in Goa’s far north, where she was born and raised. Once, her professor took her entire class to the wetlands in Carambolim to observe the avian life there. Harshada realised that she could see the same species in her own backyard! For her graduation project, she studied and documented the birds in her village’s wetlands, a total of 143 birds in one year. She also recorded many butterflies and amphibians. She submitted a report based on her findings to the Royal Society for the Protection of Birds. Thanks to these efforts, the Society declared the Navelim-Sankhali wetlands as an Important Bird Area (IBA). The realisation that a mere college project could create such significant change inspired Harshada to begin her own organisation. Years later, as a lecturer in the same college, she noticed that when the Goa Bird Conservation Network conducted their annual bird walk in the Netravali Wildlife Sanctuary in South Goa, students from Sankhali would have to leave their house at 4:30 a.m. just to arrive on time at 7 a.m. She felt that efforts to improve the environmental literacy of students should be localised, and spread across the state. That’s when she and her teammates from her B.Sc. project created Arannya.

Founded in 2017, it is now run by a group of eight Goan environmentalists, all with a background in ecology, wildlife biology or conservation. Harshada is the co-founder and head of the organisation. Shubham Rane is Secretary, Triveni Gauns is Treasurer, Pronoy Baidya is Joint Treasurer, Diksha Satarkar is Joint Secretary, Mayur Gawas and Jalmesh Karapurkar act as Executive Board committee members, and Saish Pirankar is an advisor. The organisation aims to bolster wildlife conservation efforts in Goa through education, research, outreach and action across schools and colleges in the state. Since its inception, it has collaborated with over 50 educational institutions, organising nature camps, biodiversity walks and conducting courses on forest ecology for students.

Though Harshada was born and raised in a village and was always connected to nature, as a young student, she faced many challenges. As the only girl on her B.Sc. project team, she received several negative comments from her family and from others in her village. A little bird, the Red Avadavat, changed all of that one day. Her team reported the first sighting of the bird in Goa – in their very own village wetlands. The story of this finding soon appeared in local newspapers. Since this incident, villagers have been contacting her for help with local environmental issues! 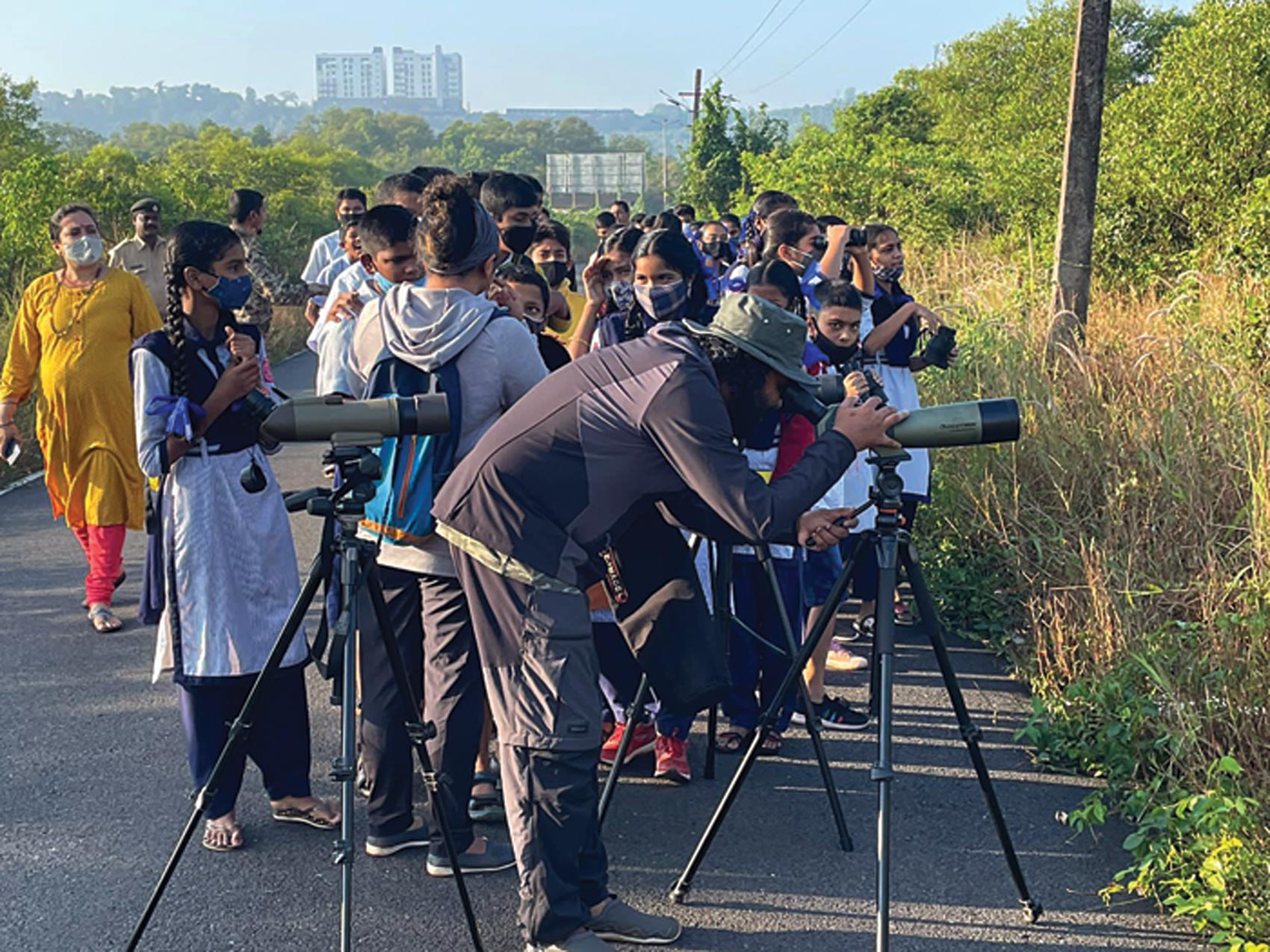 The Arannya Environment Research Organisation (AERO) team on a nature trail with students. The organisation has conducted nature-based learning activities for over 50 schools since its inception in 2017. Photo: Shivcharan Gauns.

Besides educational programmes for students, Arannya has worked with local communities, documenting traditional nature-based practices, local biodiversity, and preparing solid waste management plans for villages. It also began a programme called ‘Research Matters’ for second-year students on the cusp of entering their final year, where they were taught how to conduct effective research for their final year project. Another interesting initiative piloted by the organisation was its ‘adopt a school’ programme, where the team worked closely with schools to create an outdoor-based, environment curriculum that prioritised studying local biodiversity.

Arannya also started the No-SUP (single-use plastic) campaign, where volunteers sensitised street vendors to the dangers of using single-use plastic and distributed pamphlets to hang at their stalls, discouraging plastic use. The organisation has approached hundreds of shops as part of this campaign.

Since the COVID-19 pandemic hit, many of Arannya’s on-ground projects and activities have been forced to a halt and the organisation has had to change track. After schools went virtual, it decided to conduct online sessions in the form of workshops, talks and competitions for the 150 students – from primary school to college – that it works with. While the pandemic-related restrictions have been a challenge, it has also provided new opportunities. Arannya launched ‘Burgeon’, a programme that provided college students studying wildlife and conservation-related subjects a platform to showcase their research and interact with a field expert in their chosen field of study. Part of Harshada’s motivation to start this programme was that she was tired of the repetitive format of online talks during the pandemic. She wanted students to enjoy interactive sessions and so far, the team has conducted eight such sessions in Goa. 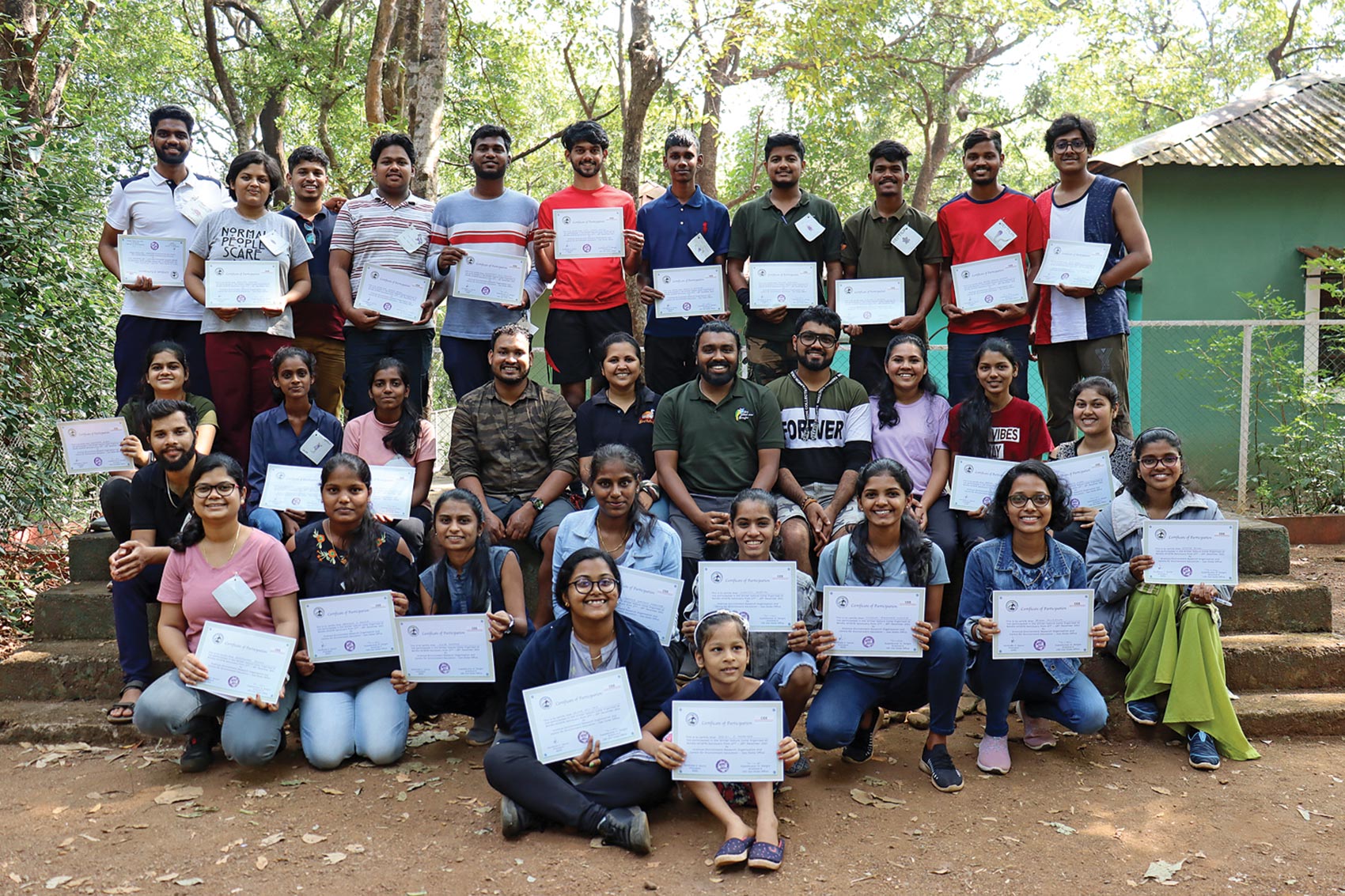 Young participants at the Bondla Nature Camp in the Bondla Wildlife Sanctuary, which is home to gaur, sambar, leopards, porcupines and a variety of fauna. Photo: Shivcharan Gauns.

With schools reopening, since March, Arannya has been conducting bimonthly biodiversity walks which explore varied ecosystems, floral and faunal groups. Its next area of focus is ocean-based nature camps, to expand from its existing forest-based ones. Harshada hopes that through these camps, students will learn not just about the ecology of the places they visit, but also engage with the problems faced by local communities.

Arannya’s future plans involve giving hands-on, field-specific, small-scale training to those who are doing wildlife research and citizen science.It also intends to revive its Research Matters programme and its No-SUP campaign, which had seen a huge success before the pandemic. With a long-term vision of helping create a society that lives sustainably, Harshada and her team hope that they can empower people to act on a small, local scale to create long-lasting ripples that eventually lead to bigger changes.

Learn more about Arannya’s work via its website. To get regular updates on its initiatives, follow the organisation on Facebook.
For more details, you can write to arannyaero@gmail.com
join the conversation