An Extract from Exotic Aliens - The Lion and Cheetah in India

The truth about lions (and cheetahs)

Captain Thomas Williamson, the author of the epic book about Indias animals, Oriental Field Sports, says that in the 1780s, while pig-sticking, you were only likely to encounter tigers that had strayed into the open, but never lions, or for that matter, cheetahs. He went on to state that, after spending the last two decades of the 18th century roaming the wilderness of India, he believed that there were no lions in Hindostan. For me, this was an excellent clue regarding the state of the lion during that time, which was, then, a much debated topic. 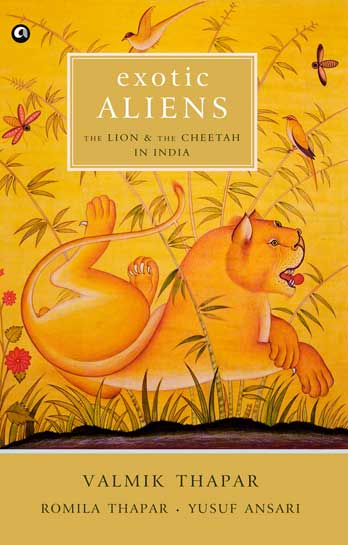 In his book, Wild Animals in Central India, published in 1931, A. A. Dunbar Brander writes that there were no lions in central India and goes on to say of the cheetah that, “The hunting leopard Cynalurus jubatus has now almost entirely disappeared from the province without apparent reason, and I only know of three animals having been procured in the last 20 years." As we will see in the course of this book, it is likely that what Brander referred to must have been three trained cheetahs imported from Africa. Why is it that the comments about lions and cheetahs and their rarity remain unchanged over hundreds of years, especially from people who travelled across India in search of game? Why is it that there are hardly any pictures of lions as hunting trophies and the few that exist tend to have been taken after 1886 in Gir? Where are the cheetahs in the hunters bags? After all, according to commentators, hunters were responsible for destroying both these species.

As I researched my thesis, I grew convinced that I had stumbled upon the biggest myth perpetrated about these two species in India. Tigers and leopards were everywhere in the historical record, whether written, photographed or depicted in other visual forms, but lions and cheetahs were almost invisible. Even on those rare occasions when lions and cheetahs were seen, their behaviour appeared forced and unnatural compared to what I had witnessed of both species in Africa. As with the lion in India, I believe there was never an ‘Asiatic cheetah. Rather, this animal was an imported royal pet that escaped into the wild on several occasions and may have sometimes created small feral populations. The evidence that my co-authors and I have unearthed in the course of our research and study, has duly underlined the basic premise that I began this book with -that the Indian (or Asiatic) lion and the Indian (or Asiatic) cheetah are not distinctive subspecies, but are exotic aliens that live (or lived) in the land of the tiger. For me, this fact was made amply clear as I ploughed through hundreds of books and research papers on both the animals. The numbers just didnt add up; I found lesser and lesser encounters with lions and cheetahs the more I read.

Descriptions of both species were rare, and both seemed to lack a ‘tradition in India. Tigers and leopards were all over the place; lions and cheetahs in comparison were barely visible in the pages of history. This book is the story of our search and raises serious questions about the ancestry and place of the lion and the cheetah in their natural state in India.

Exotic Aliens - The Lion and Cheetah in India