A Pulicat Story: The Lagoon That Protects a City

Our boat floats further into this cradled marine space, the silhouettes of fishermen cast their nets into the water. Whimbrels sashay onto a long spit of sand and wait for us to pass. Some men wade neck deep, setting up a seine or catching prawns. A young White-bellied Sea Eagle perched on a wooden pole, stares into the ripples. A whirring cloud of Sand Plovers pass over head before descending to blanket an exposed mudflat. Red ghost crabs vanish into their holes. The morning horizon shimmers pink with long lines of Painted Storks and Greater Flamingos. Yuvaraj, my boatman, is a fisherman-guide who takes tourists and naturalists through the astonishing Pulicat lagoon, the second largest brackish waterbody in India after Odisha’s Chilika lake. Over the years I have seen Yuvaraj evolve, his ability to identify waterbirds and waders from afar, just by their flight or stance, continues to amaze me.

A seine-net tightens and the water flutters with beating fish. What looked like an islet of white in the distance, morphs into a mixed flock of gulls and terns, to the accompaniment of frenzied squawks. The birds tail the net being reeled in, plummet into the water to pounce upon the frantic fish. 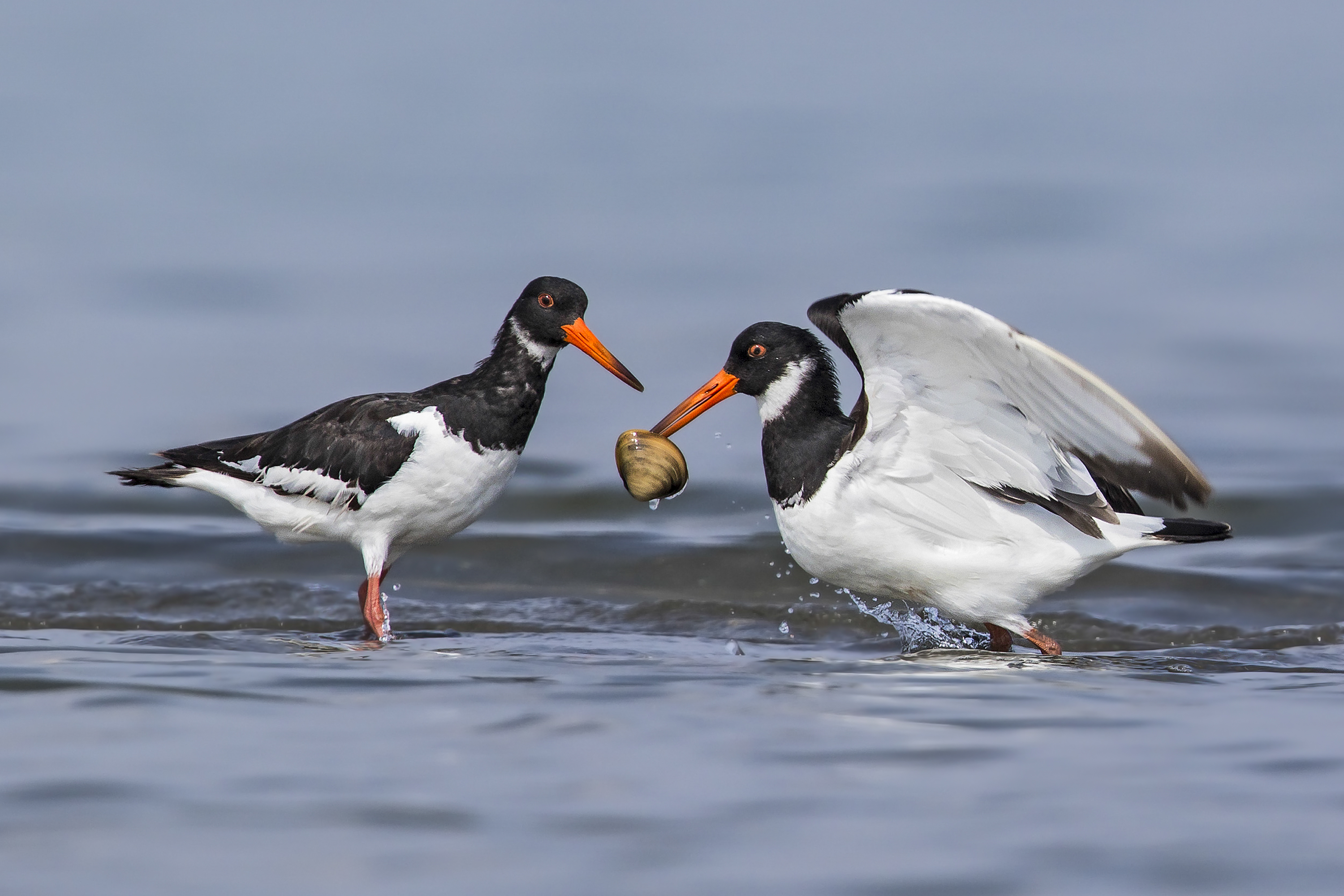 Oystercatchers are among the region’s migratory visitors that depend on the abundance of oysters, mussels and gastropods found here. Photo: Sambath Subbaiah.

Pulicat’s continuum of ecologies defies our divisional notions of diverse ecosystems. Three rivers flow through the region – the Kosasthalaiyar, Arani and Kalangi. They branch, broaden and then gradually empty into the brackish waterbody. The lagoon’s salinity fluctuates with tidal movement and seasons. At the monsoon’s peak, the salinity may drop to zero as freshwater inflows fill the lagoon. The nature of this living space vacillates to its own rhythm to create a rare confluence of ecologies. Many habitats meet and merge to form what is called the Ennore-Pulicat coastal wetland complex spanning some 8,000 acres in the north of Chennai. In this enchanting place occur coastal dunes, riverine distributaries, backwaters, creeks, saltpans, mudflats, mangroves, tropical dry evergreen forest, scrub, grassland and, of course, the 700+ sq. km. lagoon that spills into and is fed by the ocean.

On a map, this waterbody is a garland of fishing villages. Over a hundred thousand fisherfolk draw their livelihoods from these waters, which support over 200 species of birds protected by the Pulicat Bird Sanctuary and its surrounds. Migratory studies conducted over decades confirm that it is a vital stop-over location on the Central Asian flyway. Perhaps its most admired attractions are its Greater Flamingos, over 15,000 of which are to be seen here. Predictably, Pulicat is also a crucial breeding ground for plenteous fish species and other marine life.

Beyond this staggering biodiversity, this bio-region is also a lifeline for Chennai city, which draws between 75 and 100 million litres of freshwater every single day from the ‘well-fields’ of its river basins. Pulicat saves lives too. When cyclones hit the coast, the lagoon wetland-complex plays its role as a massive floodwater catchment. The Pulicat barrier island and associated sand-systems also act as critical cyclonic buffers and barricades against tidal and storm surges. 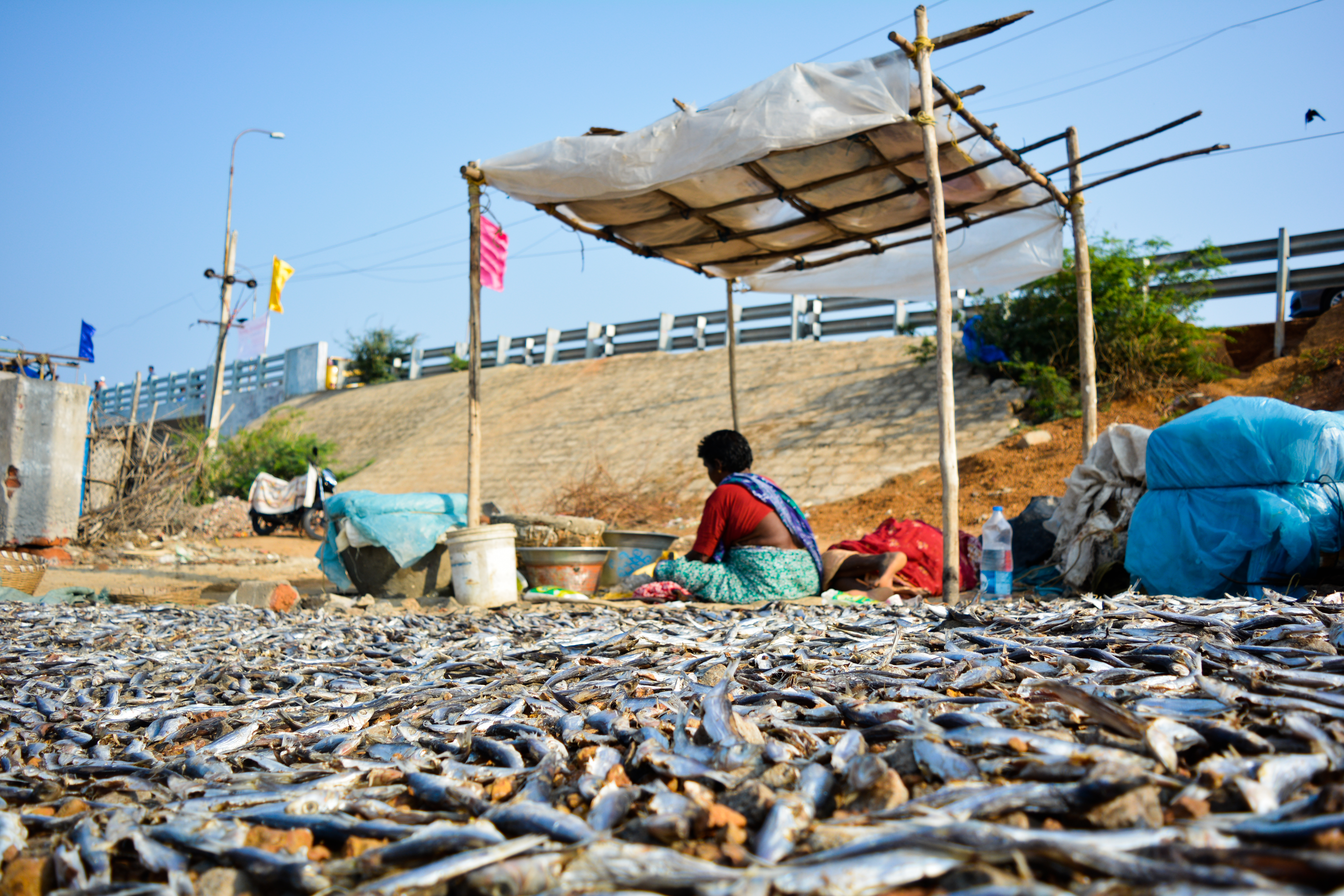 The brackish waters of Pulicat lake are breeding and nursing grounds for diverse fish species including milkfish, sea mullet, and Indian catfish. Over one lakh fisherfolk derive their livelihood from this productive ecosystem. Photo: Abinaya Kalyanasundaram.

The Ennore-Pulicat wetlands have been systematically encroached down the ages by all manner of people. North Chennai has a dark and difficult history. ‘Black town’ was the way the British described the area. The people living here are largely made up of fishing, tribal and scheduled caste communities. Most live hand to mouth, dependent on land and sea. As in the past, they continue to be easily overpowered, both financially and politically, vulnerable as they are to discriminatory development. Here the city’s first harbour, chemical industries, pharmaceutical factories and thermal power stations were built. Chennai’s largest landfill in Kodungaiyur, sprawling over 270 acres, houses the garbage of its more ‘well-to-do’ residencies.

The seashore is not a static and fixed strip of land. Shores are dynamic edges, liminal spaces constantly being remodelled and reshaped by sea, wind and lifeforms. It’s a throbbing, breathing, living space. Many of the climate traumas that afflict Chennai today are a direct result of tampering with this coast that has protected the city for centuries.

Few city planners truly understand the workings of the coast-shaping longshore currents on the Indian coastline. These currents move parallel to our beaches, driven by our unique monsoon pattern. For most of the year, along the eastern coast, the currents flow south to north, daily shifting tons of sand across all segments of the shoreline. The displaced sand is continually replaced by incoming currents. When a large infrastructure like the Chennai port is built on the beach, it blocks the path of these currents, resulting in sand accretion to the south, and coastal erosion to the north. 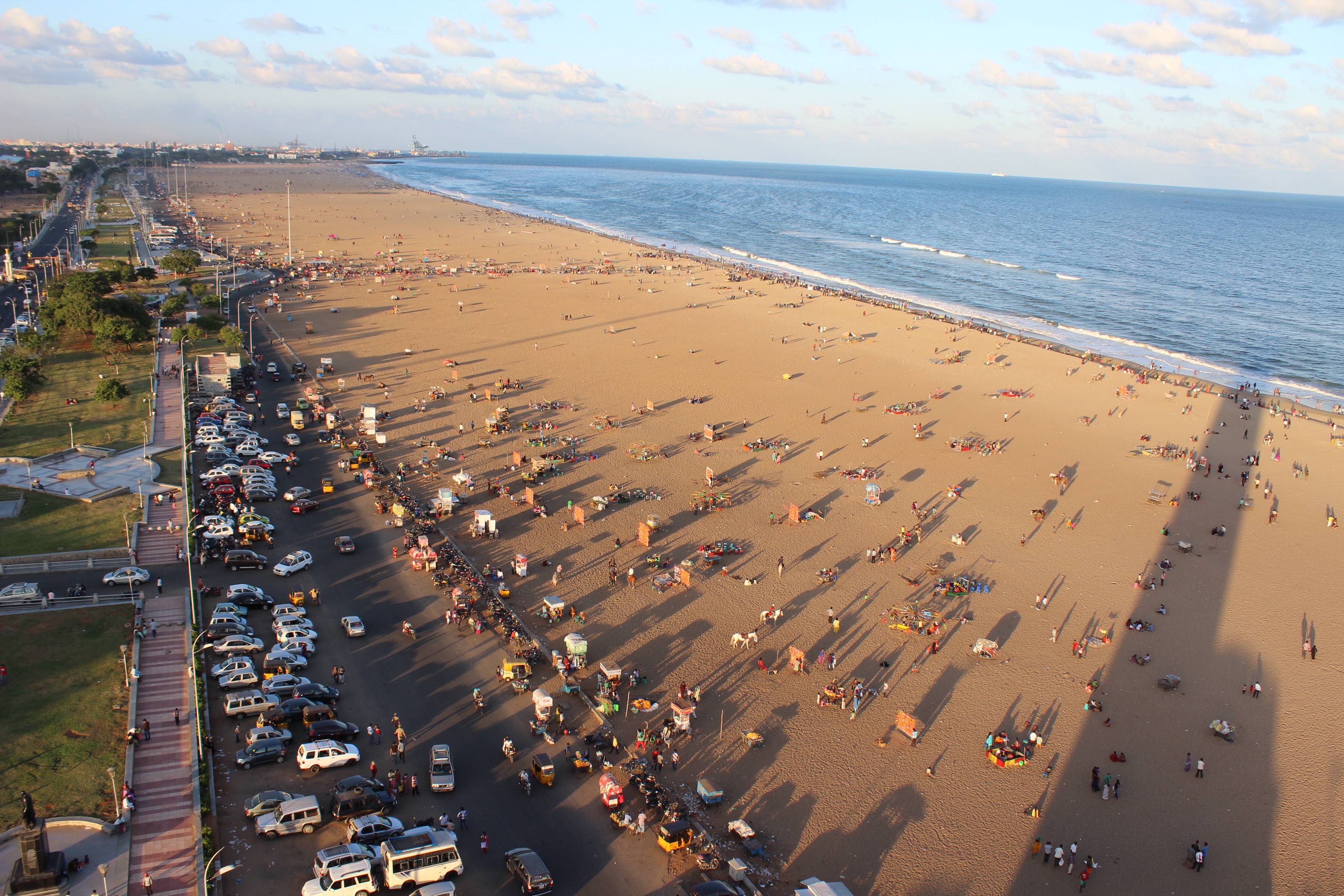 Marina beach, known to be the world’s second-longest, was formed by sediment accumulation after the construction of the Chennai port (formerly the Madras port) in 1881. Meanwhile, in Ennore to the north, 600 acres of coastal land were eroded. Man-made structures, such as ports, disturb the natural movement of coastal sediments from south to north during the monsoon, leading to accumulation in the south, and erosion to the north. Photo: Public Domain.

The ‘Shoreline Change Atlas of the Indian Coast’ released by ISRO, mentions that the famous Marina beach resulted from the accumulation of sediment south of the Chennai port. To the north, in Ennore, where a natural beach once existed, the Bay of Bengal has taken away more than 600 acres of coastal land. The document further states that this section of coastline continues to suffer severe erosion. With such ecological disruptions saltwater intrusion was inevitable and has rendered aquifers in several neighbourhoods unusable. Ignoring such clear consequences, the Kamarajar port and the L&T shipyard were built here, against all warnings, and, predictably, further erosion and the needless displacement and pauperising of large numbers of people were the price paid.

However, all these projects are virtually insignificant, when compared to the massive commercial port proposed here by Adani Port Limited. Planned in the village of Kattupalli, just south of the Pulicat lagoon, this will expand across the L&T shipyard, to claim 6,108 acres, up from its present 330 acres. Defying signals sent by rising seas and a worsening climate crisis, over 2,000 acres of this area will flatten land-based ecosystems, another 2,000 will claim rich, biodiverse coastal and intertidal habitats, and yet another 2,000 acres are to be ‘reclaimed’ from the ocean by dumping dredged sea sand and soil quarried from the Palaar river. Understandably, fragile coastal habitats within this massive area will be damaged beyond repair. A total of six kilometres of beach is likely to be paved and privatised. Whole villages of fisherfolk will be ousted. 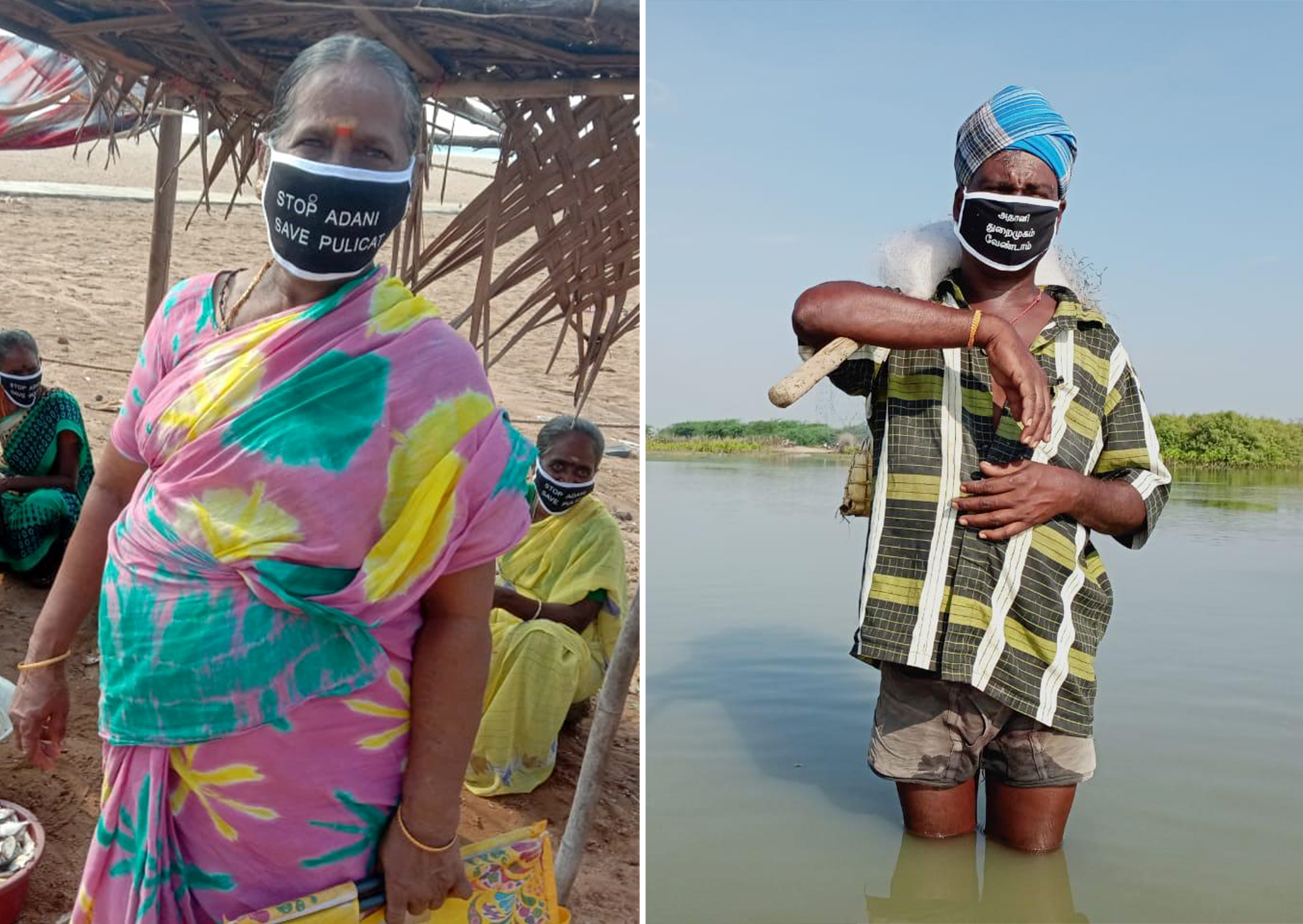 Fishing community members wear black masks to protest against the 6,108 acre megaport proposed by Adani Port Limited in the village of Kattupalli, just south of the Pulicat lagoon. If built, this will irreversibly damage the biodiverse region. Photo: S. Palayam.

All this is beyond comprehension, given what we know about the impact of climate change on human safety. But possibly the greatest danger may come from the choice of location. Planned to be India’s largest port project, it could obliterate much of Pulicat, and perhaps erase it from our maps. Expert, environmental and social advocate Nityanand Jayaraman says:

“The proposed port will trigger erosion of the sand barrier island, merging the Pulicat lagoon with the Bay of Bengal. And if the eroding effects spread further North, the sea will get close to the launching site of the Indian Space Research Organisation, which is merely 800 m. from the waterline on Sriharikota island.”

The consequences for Chennai could be more than its people can bear. Saltwater intrusion into coastal aquifers, will extinguish an unspeakable quantum of the city’s water security, at a time when the city is already acutely water-stressed. Moreover, a long stretch of the coast will be directly exposed to cyclones, without the natural land and sea barriers such as sandbanks, mangroves and beaches, leaving over a million citizens living in five constituencies at enhanced flood risk.

A peoples’ movement has been brewing over the past year in Chennai, with citizens and concerned groups staging their dissent over the Adani port. Increasingly aware of the downplaying of climate impacts on their lives by ‘developers’, on September 22, 2019, Chennai held its first climate strike. Over 1,500 people gathered at Elliot’s beach. The focus: ‘Stop Adani, Save Pulicat’. A month later in October, Pulicat’s fisherfolk conducted a massive rally within the township, asking for the port project to be cancelled. In February 2020, the Chennai Kalai Theru Vizha (Chennai Street Arts Festival) brought people together at Pulicat from different parts of the city. This included school children, who walked with locals and naturalists through Pulicat in a unique citizen-science exercise to survey the bird, aquatic and shore life. A heritage walk through the historic Pulicat township, studded with Dutch monuments and other archaeological structures dating back to the 15th century helped weld the value of our living and non-living heritage. Later in the evening, the locals staged a concert for all who had gathered, celebrating life and exuding the positivism India so badly needs today. Traditional theatre and dance forms including villupaattu, kolattam, paraiyattam and kummi underscored the fact that all cultures, religions, and customs were deeply braided with nature and the landscape.

Peaceful and creative, through such initiatives, people are rallying behind governments, politicians, scientists, economists and corporates to ask that our country’s national development ambitions be in sync with the imperatives of the biosphere. And that is the singular mission behind the thrust of the Pulicat story. The campaigns of the fisherpeople continue in novel ways. During the COVID-19 lockdown, across the Chennai coast, fishworkers and locals wore black masks, which said – ‘Stop Adani, Save Pulicat’.

Across the Oceans, the impact of the Adani Carmichael coalmine in Australia, threatens the Great Barrier Reef

The Carmichael coalmine project in Queensland, Australia plans to extract coal from areas sprawled across 200 sq. km. in the ecologically-rich Galilee basin. December 2018 saw thousands of people taking to the streets of Australia in protest. Nevertheless, the project, was approved in June 2019, with the Queensland government stripping the area of the legal status enjoyed by the indigenous people who lived there long before Australia was colonised. Experts have opined that the Carmichael project presents a great threat to the Great Barrier Reef, one of the few living-structures visible from space. The reef will be exposed to damaging coal ship traffic, excessive groundwater extraction and high amounts of thermal pollution that will accelerate coral bleaching. The Australian Marine Conservation Society (AMCS) says, “We’ve seen the evidence, when Adani exceeded its permitted pollution discharge limit into the Great Barrier Reef World Heritage Area by more than 800 per cent at the Port of Abbot Point.” The AMCS adds, “The Carmichael coal mine would add 4.7 billion tonnes of carbon pollution over its lifetime”, which itself is 0.5 per cent of the global carbon budget to limit warming to 2°C. In February 2020, the corporate was criminally convicted over the Carmichael project, for giving false information about clearing of land area. Plans for mining, though, are set to go on.

M. Yuvan is a naturalist, writer, educator and activist based in Chennai. He has spent many years developing Earth-centric and child-centric education curriculum in schools and has been part of various social and environmental campaigns across India. His book A Naturalist’s Journal is a collection of essays about our countryside wilderness.