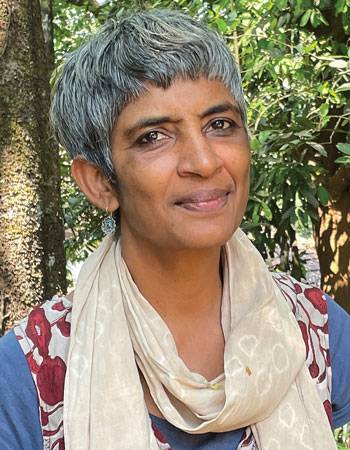 Since childhood, Suprabha has experienced a deep sense of belonging with the natural world. Encouraged by her family and together with various peers, she explored wild places throughout her youth. She read and wrote on the subject, prepared appeals to save wildlife, and routinely rescued injured and orphaned animals. She also organised hikes and nature activities for younger kids at school.

After obtaining her degree in Earth Studies from the U.K. in 1989, Suprabha spent the next two years travelling in search of wildness and wildernesses. When she eventually returned to India, with a few friends, she visited the Gurukula Botanical Sanctuary (GBS) – a community-led conservation centre in Wayanad, Kerala. Founded by the late Wolfgang Theuerkauf, GBS focuses on the rescue and protection of endangered plant species of the Western Ghats. Scheduled to spend 10 days there in the winter of 1992, she discovered she had found her calling in life – “rainforest conservation”. She and her friends extended their stay. As for Suprabha... she never left!

Today, as a long-term custodian of GBS, she undertakes much of its educational and outreach activities, including supporting various restoration initiatives in the Western Ghats. She is one of the co-founders of GBS’s School in the Forest, a broad collaborative initiative with educators across the region. A creative and enthusiastic educator, Suprabha has also been a core member of a team that runs ‘Landscapes and Lifeskills’, a five-month programme for young adults, many of whom have embraced vocations in restoration and conservation.

Suprabha is devoted to protecting old growth forest and to recovering degraded land to forest. She and her colleagues have painstakingly nursed a rainforest habitat with a myriad plant species back to life, and speak of their work as “ecosystem gardening”. Every such recovery contributes to restoring the micro-climate and raising the water table. As the rewilding process unfolds, rare native animals, birds, and insect species – many highly endangered – have begun to return. Members of local communities, who are still intimate with the natural world, discover how they too can further contribute to, and benefit from, such self-sustaining ecological nurturance practices.

Through her life, Suprabha has designed and directed several  research and restoration projects, both at GBS and at other botanical wonderlands such as the famous Mukurthi National Park and the Tala Cauvery Temple Sanctuary. She is now working on a ‘Canopy Care’ project, focusing on the tender plant species of the rainforest canopy. For her missionary work, Suprabha received the prestigious Whitley Award in 2006, which she accepted on behalf of the Gurukula Botanical Sanctuary.

Proof of the regard with which Suprabha is held by her contemporaries can be gauged by the many roles she plays with different environmental organisations and collectives: She is a co-founder of the Munnarakkunnu Trust in 1996 and since 2014, its Managing Trustee; she is the Coordinator of the Green Phoenix, an outreach wing of GBS that works on public and common lands, on river, forest, wildlife, community and food issues. Since 2009, she has also been a Trustee at The Forest Way Trust, Thiruvannamalai, Tamil Nadu, and a Trustee at the Environmental Support Group – India, Bengaluru since 2016. She is a member of the IUCN Western Ghats Plant Specialist Group and of the Coalition of Environmental Justice of India. She is also a Fellow with Ashoka Innovators for Social Change and serves on the Steering Committee of the newly-formed Ecological Restoration Alliance-India.

This resolute nurturer of India’s wilds has spoken regionally and internationally about the ecological basis for a healthy planet. She invites us all to explore life as part of a community with non-humans, and passionately underscores the two contrasting aspects of nature that ecosystem gardeners know well and work with: resilience and fragility.