Text and Photographs By Ian Lockwood

East of Mumbai and a lifetime away from the megacity’s hustle and bustle is a natural treasure that was once visible on clear days at Colaba. A thick cocktail of industrial smog now obscures the range of mountains known as the Sahyadris. There was a time when these rugged mountains played a vital role in Maratha history. The forts that still crown some of the most remote hilltops bear testimony to Chatrapati Shivaji and his remarkable understanding of the Sahyadris. In modern times, they have become the refuge of remnant wildlife populations as well as naturalists, rock climbers and trekkers.

Though the term ‘Sahyadris’ is sometimes used to describe the entire Western Ghats, it is more accurate to associate the Sahyadris with the hills running from the tri-junction of Goa, Karnataka and Maharashtra northwards to the Tapi River near the Gujarat border. Conservation International has designated this entire chain of mountains, along with Sri Lanka, as one of 34 global biodiversity hotspots. The Sahyadri range is narrow, about 10-20 km. wide from east to west, and about 640 km. long. The western face rises dramatically from the moist Konkan Coast while to the east they fall more gently into the expansive and arid Deccan Plateau. The average height is roughly 1,000 m. with the highest point, Kalsubai, reaching 1,646 m. near Nasik.

The beauty of the monsoon mist is captured in this stunning image of a leafless tree photographed in Mahabaleshwar. Here, near the crestline of the Sahyadris, the moisture laden air of the southwestern monsoons encounters cooler temperatures and deposits much of its rainfall.

The geological composition of the Sahyadris is their defining element. These mountains are volcanic in origin and only about 60 million years old. In contrast, the ranges and lofty plateaus of the southern Western Ghats are older Pre-Cambrian formations. The Sahyadris and the entire Deccan Plateau were created by one of the largest incidences of volcanism recorded in history. It is speculated that there was an unprecedented burst of volcanic activity as the Indian plate drifted over a mantle hotpot on its way to collide with the Asian plate. The popular view points in the hill stations of Matheran or Mahabaleshwar give you a sense of the dramatic volcanic activity that lead to the formation of the Sahyadris. At these points, a vast panorama of ridges drop precipitously down to the Konkan Plains. Dark lines of vegetation separated by vertical basalt cliffs appear to create evenly separated ‘steps’ on the slopes. It is little wonder that early observers called them ‘Ghats’. These steps or traps represent basalt flows that are the most dramatic remnants of the formation of the Deccan. 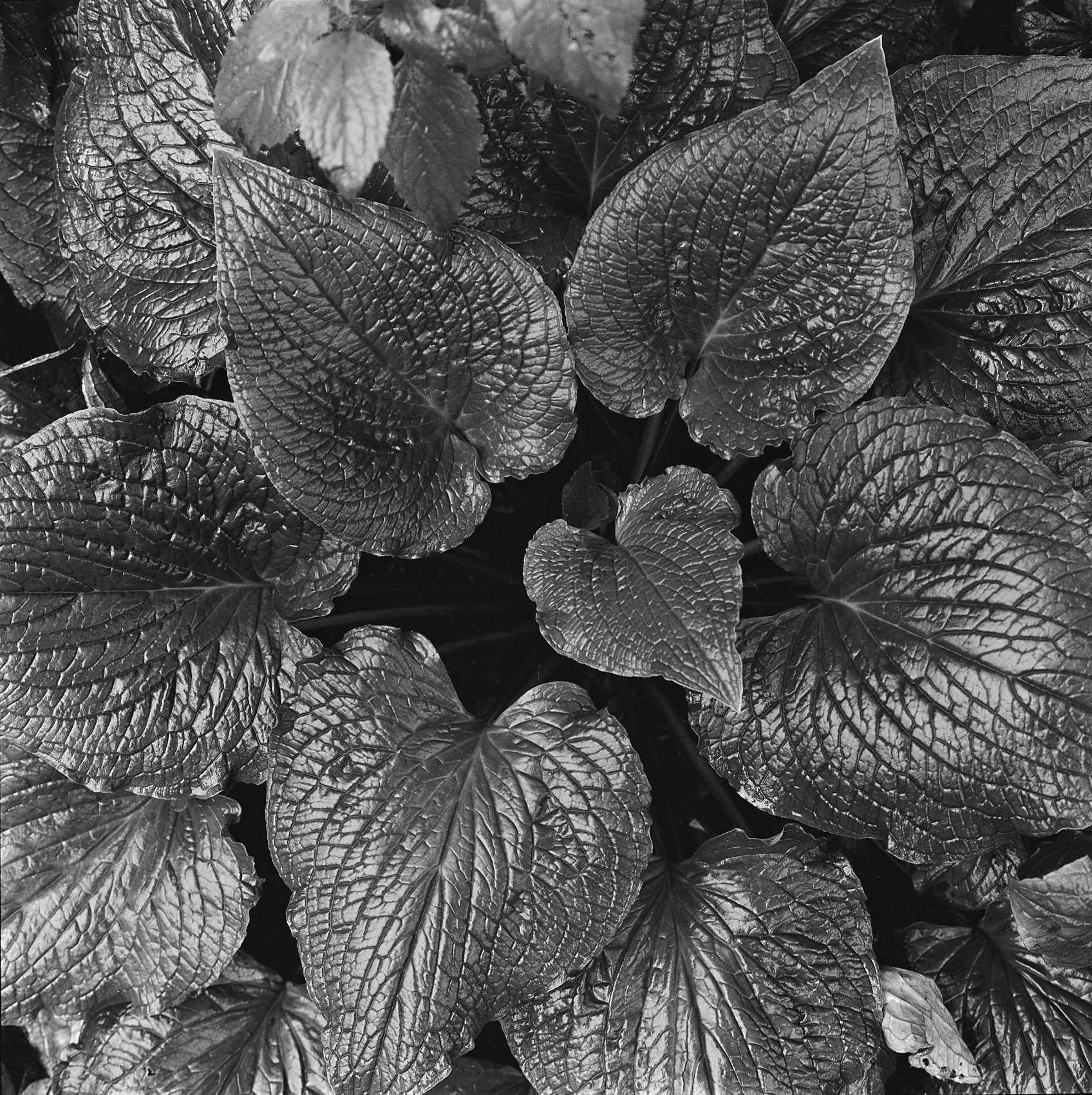 A medium-sized low shrub Paracaryopsis coelesina with cabbage like leaves is a common sight during the monsoons in the high Sahyadris.

The vegetation of the Sahyadris is largely determined by the mountains’ altitude and proximity to the western coast. The mountains act as a barrier to the annual monsoon, forcing a high volume of rain to fall on the crestline where annual rainfall measurements vary from 4,000 to 6,000 mm. Lying in the rain shadow, the eastern slopes of the Sahyadris receive significantly less rainfall, yet the hills serve as a critical catchment for key eastern-flowing rivers such as the Godavari and Krishna. Evergreen forests dominate the wet areas along the crest. Places like Amboli in southern Maharashtra have excellent wet evergreen forests and host typical rainforest species. Most of these are fragmented and there are only a few large contiguous forest areas left. Drier areas further east have moist-deciduous and dry-deciduous scrub forests mixed in with grasslands where the soil is shallow. 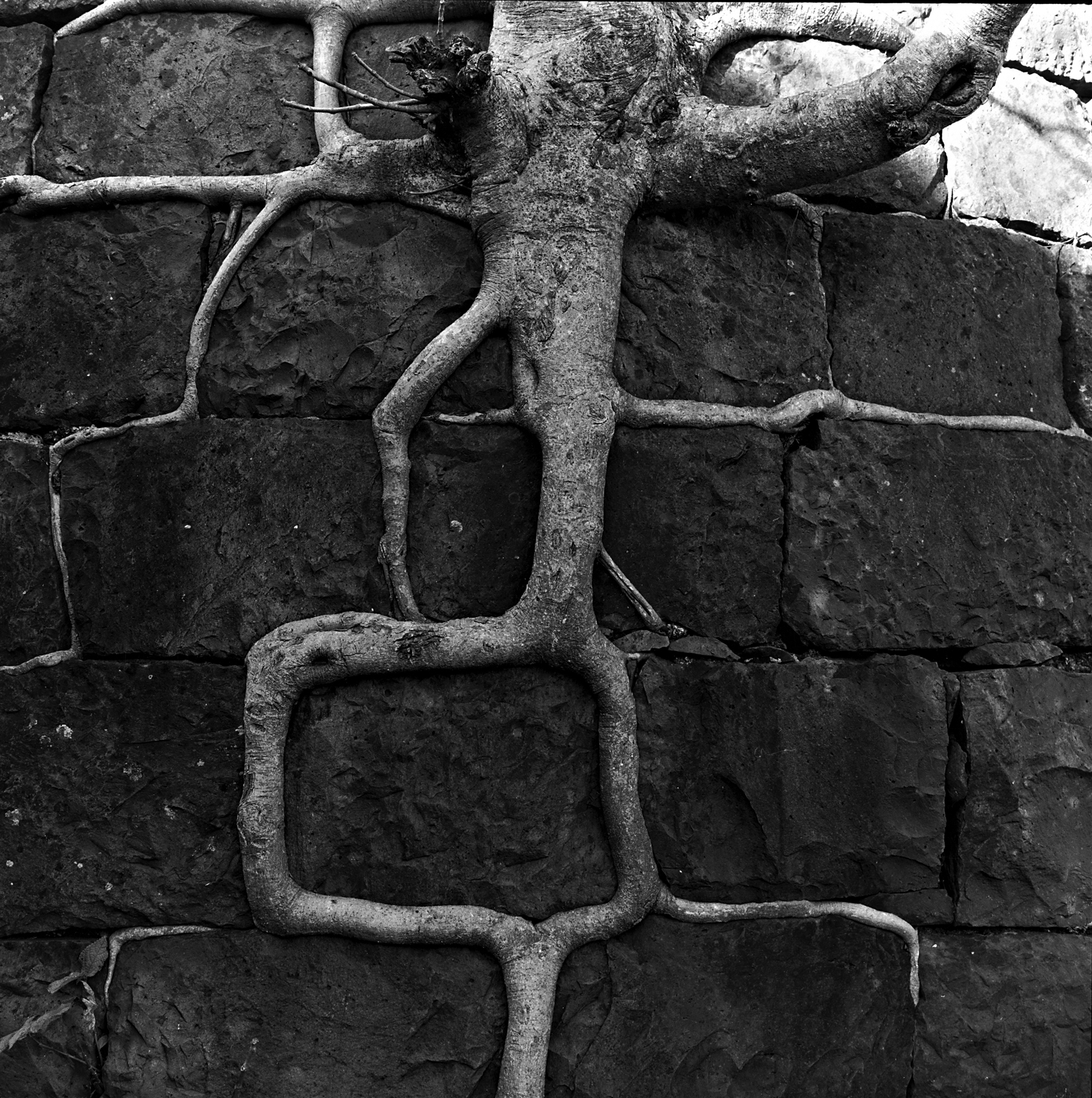 The roots of the Ficus arnottiana tree grow around ancient blocks on Shivaji’s Tikona fort.

Annual cycles of burning and grazing have occurred in most of the range for hundreds of years. This has dramatically altered the vegetation and the wildlife it supports. A first impression of the mountain vegetation would be of large expanses of grassy hills with scattered trees and clumps of forest. Hydroelectric, irrigation and water supply projects have dammed up many of the river valleys. Thankfully, the presence of dev rais (sacred groves) throughout the Sahyadri range serve as veritable time machines. These ancient forests, protected by generations of local communities for spiritual reasons, retain a sense of the past. The canopy height, plant and animal diversity of a dev rai, usually gives a good indication of the vegetation the entire area would have supported in the past! The continued protection of dev rais is a crucial foundation of conservation based on local knowledge and efforts. 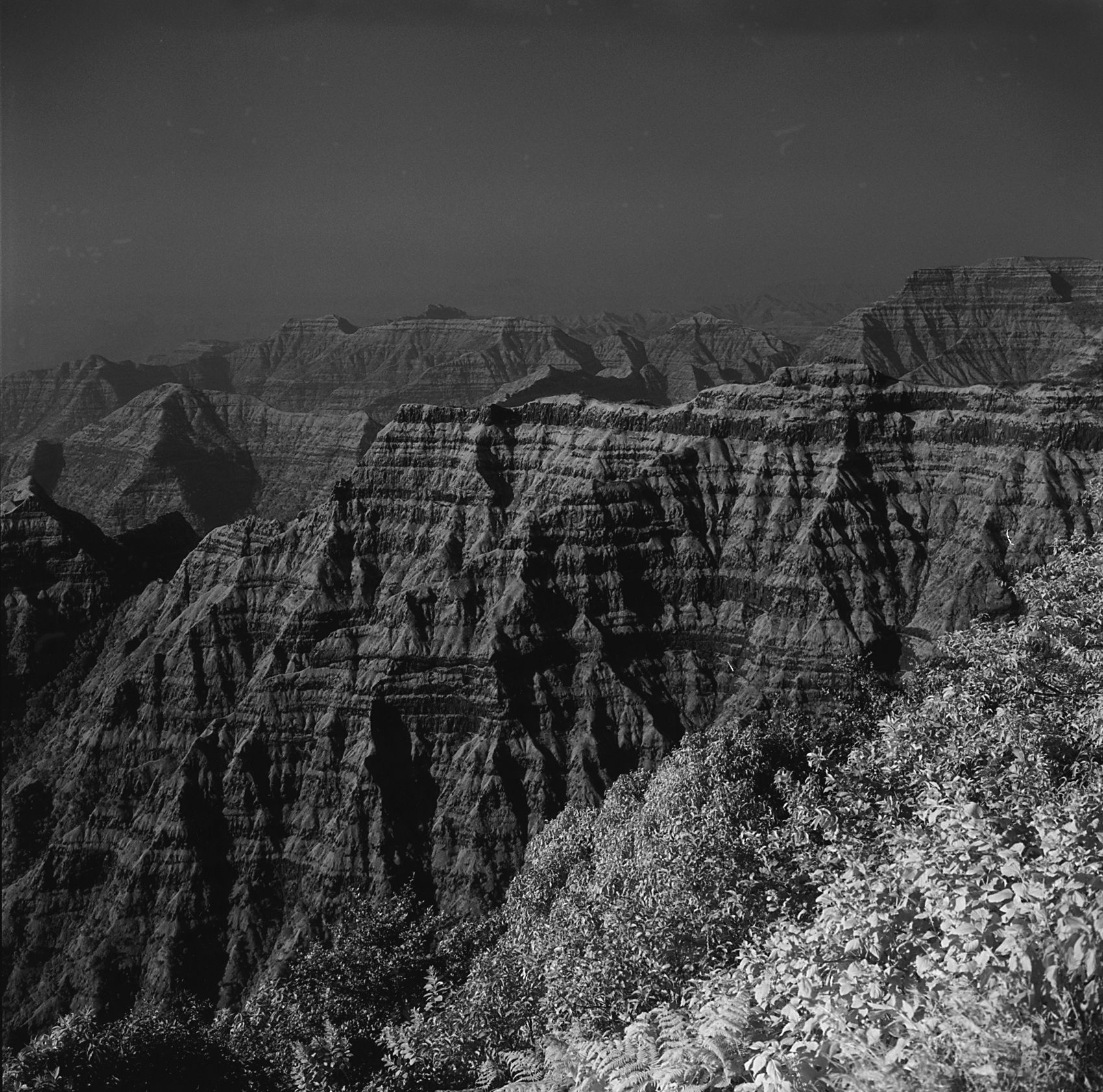 Remote and forgotten forts such as Tikona offer excellent opportunities to experience the wild Sahyadri. Breathtaking views of the dramatic Sahyadri landscape such as these traps can be seen from Elphinstone Point, Mahabaleshwar. Here, lava flows have created veritable steps that drop from the 1,400 m. high plateau to the Konkan coast.

There are several formal Protected Areas in the Sahyadris but much of the range remains un-notified. Bhimashankar, north of Lonavala, is an important wildlife sanctuary as well as a pilgrimage site and dev rai. It has excellent moist-evergreen forests and is well known for its populations of shekru, a subspecies of the Indian giant squirrel Ratufa indica elphinstoni. The mixed forests around the amazing fortress of Harishchandragad are protected, though few pilgrims and trekkers visiting the area know it. Further south, near a large artificial reservoir, the Koyna Wildlife Sanctuary hosts healthy populations of gaur and other animals. Tigers are extremely rare, but recent sightings north of Mumbai give hope of the possible return of the great cat. Leopards Panthera pardus fare much better and are well distributed in the Sahyadris. A recent forest department proposal seeks to link Koyna with the Chandoli National Park to establish a tiger reserve in the Sahyadris.

The extensive forests that still crown some of the hills in the Sahyadris can be seen from Arthur’s Seat (below) in Mahabaleshwar.

Interestingly, most of the animal species endemic to the Western Ghats are absent in the Sahyadri ranges. There are no lion-tailed macaques, Nilgiri tahr, Nilgiri marten or Nilgiri langur in the northern ranges of the Western Ghats. Having gazed down the incredible cliffs of both the southern Western Ghats and Sahyadris, I have often wondered how long ago it was that the Nilgiri tahr bounded around in what seems like a perfect habitat. There are also no wild elephant populations left here (with the exception of  stray reports from the southernmost tip of Maharashtra and adjoining areas in Goa), perhaps due to the absence of large tracts of forest. Endemic birds such as the Nilgiri Wood-Pigeon Columba elphinstonii, Malabar Grey Hornbill Ocyeros griseus and White-Bellied Blue Flycatcher Cyornis pallipes are found as far north as Bhimashankar. There are also several snakes and amphibians found only in the Sahyadris including a handful of endemic shieldtails. 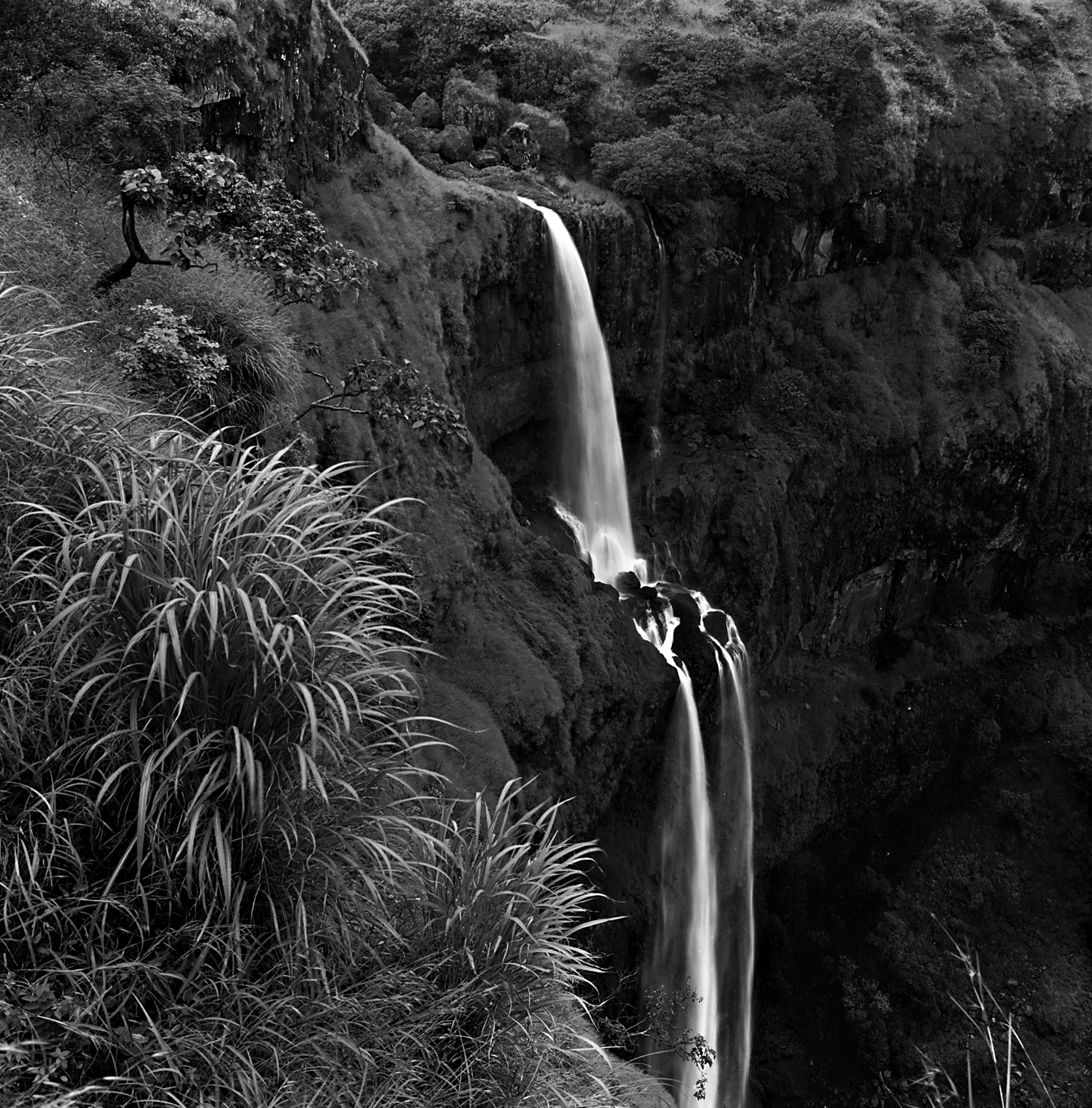 The Venna falls is fed from such expansive forests and an artificial lake on the Mahabaleshwar plateau. This is an ideal location to sight Malabar Whistling Thrushes Myiophonus horsfieldii in the monsoons.

An intriguing feature of the Sahyadris is the impact they have had on the culture of the local people. Although the Sahyadris were a formidable barrier between the coastal plains and the upper Deccan, early inhabitants developed several important passes and trade routes at places like the Nane and Bor Ghats. Today, people commuting between Mumbai and Pune on the six-lane expressway are unlikely to realise the historical significance of the ghat section that traverses the Sahyadri near Khandala. More than 2,000 years ago, the same area was an important trade route that supplied cotton, timber and spices to coastal cities. Roman traders came to several Konkan ports, including Kalyan, to buy goods produced in the interior, transported across the Deccan and down the ghats. Wealthy Buddhist patrons paid for the excavation of caves and hermitages along the way. Karla, Bhaja and Bedse caves near Lonavala all bear testimony to this activity. The interesting use of animal motifs (elephants, lions, tigers, various birds, etc.) suggests a time when the area abounded in wildlife.

Excellent forests clothe Harishchandragad, a huge mountain with a crumbling remnant, 600-year-old-temple and Buddhist-era caves. Its western face drops down several hundred metres to the Konkan plains at a dizzying cliff called Konkan Kada. However, most of the valleys in the Sahyadris have lost much of their forests and only the mountain slopes and hilltops still retain some green cover. Large reservoirs such as Mulshi Lake have been built to generate hydroelectricity and supply water for irrigation to farms.

The Sahyadris were a critical defensive asset for the Marathas in their numerous wars with outsiders. Many of the mountains have flat tops and precipitous sides making them ideal defensive strongholds. A tradition of fort building took hold as much as two millennia ago and many peaks and ridges were developed as fortresses. Shivaji, more than any of his predecessors, was a prolific fort builder. Forts like Shivneri, Rajgad, Sinhagad, Raigad and numerous other lesser-known battlements still dot the Sahyadri peaks. Today, these forts are remote, difficult to reach and can mostly only be accessed on foot, a fact that has saved much of their wildlife and forest wealth. For the wandering naturalist, they offer some of the best exposure to the Sahyadri landscape, natural vegetation and wildlife. The critically endangered Gyps sp. of vultures can still be viewed from many forts. In the last three years, I have observed active nests of the Longbilled Vulture Gyps indicus on Harishchandragad, Rajgad and Torna. Many of my other significant wildlife and bird sightings were made on similar expeditions to forts along the Sahyadri crestline. 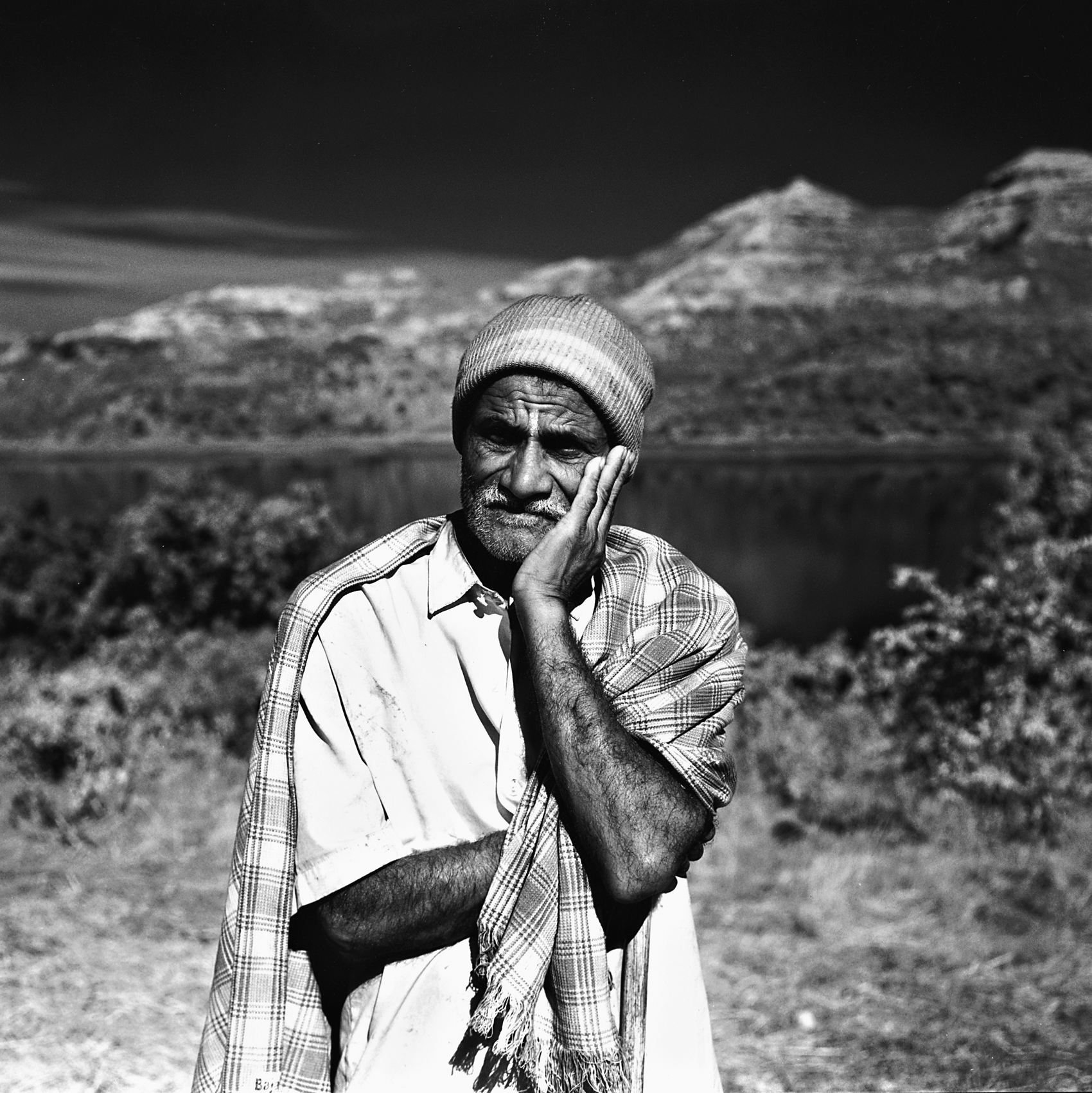 A farmer pauses to take a break from threshing rice.

From a purely anthropocentric point of view the Sahyadris serve a crucial role in providing nearby cities with a perennial water supply. With an eight-month dry season, the presence of healthy natural forests to absorb and retain monsoon rains is crucial. Mumbai, more than any other city, is completely dependent on reservoirs and catchment areas provided by the Sahyadris. Other large cities such as Pune and Nasik, as well as cities along the Godavari and Krishna, all benefit from the protection of the natural forests in the hills.

The monsoons are a time of abundance and immense beauty in the Sahyadris. Evergreen forests absorb much of this rainfall and play a key role in recharging aquifers. These forests are home to the most spectacular plant and animal diversity in the Sahyadri ranges.

The future of conservation in the Sahyadris remains somewhat uncertain. Sheer inaccessibility has for the most part prevented their development and surprisingly large tracts still have a refreshingly unblemished feel to them. However, there has been a shift with the construction of new roads and the development of resorts in once remote rural areas. There are plans to ‘develop’ once inaccessible forts with cable cars and other means of transport that would jeopardise the wildlife and aura that the forts now have. The mountain areas around Lonavala and Pune have both witnessed a flurry of construction in the past few years. Many areas along the Ghats’ crest do not have any formal protection. Mining remains a problem in several of the hill ranges south of Mumbai. A wider appreciation for the ecological role of these hills is needed if they are to be protected for posterity.