When the diminutive Lindok Rongpi appeared before a magistrate in Assam on October 23, 2012, his statement blew the lid off one of the worst kept secrets in wildlife law enforcement in India. Lindok confessed before a magistrate that he had poached six rhinos under the instructions of a member of the Kuki National Liberation Front, an armed outfit from Karbi Anglong in Assam (though the KNLF has since denied the involvement of its members in any poaching of rhinos). He also led the police to Dimapur in Nagaland, long identified as a major hub in the illegal wildlife trade, only to find that the main buyer, believed to be a Chinese national, had fled.

The increasing use of automatic weapons such as AK series rifles in recent poaching incidents has only reinforced the active interest and participation of militant groups in the illegal wildlife trade. But then, this is not the first time such linkages have come to light. In the eighties, several important Protected Areas in Assam such as the Laukhowa Wildlife Sanctuary and Manas National Park lost their rhinos allegedly to local militant outfits that saw this as an easy option to raise money for their activities.

In 2001, while conducting an investigation into elephant poaching in the Corbett Tiger Reserve, several sources in Assam and Arunachal Pradesh had voiced their concerns to this author on the close links of some of these poaching outfits to militant groups across the Myanmar border and the barter trade in wildlife and weapons amongst them.

The illegal wildlife trade is no longer small, sporadic and inconsequential. In its new avatar, it is like any other mainstream criminal activity - well-organised, well-funded, ruthless and transnational.

In the early 2000s, the CITES Secretariat, in close collaboration with the U.N. Office on Drugs and Crime (UNODC), identified key indicators that clearly illustrated the involvement of organised crime in illicit wildlife trafficking. These included detailed planning, significant financial support, use of threat of violence, international management of shipments, sophisticated forgery and alteration of permits and certifications, well-armed participants with the latest weapons and opportunity for massive profits.

Given the very high profits from such illicit activities along with the relatively low probability of detection, poor conviction rates and light punishment received by those convicted, these crimes are very appealing to professional, organised criminals. They find the wildlife trade less risky than other high-value black markets, including the narcotics trade, because the penalties associated with wildlife crime tend to be substantially less severe, while the profits are comparable to other crimes. Globally, such signs have been long recognised. Criminals engaged in the illicit trade in tiger and bear products between the Russian Federation and China are known to collaborate with the Russian mafia to smuggle contraband across the border. A large part of the illegal trade in caviar is also believed to be controlled by the Russian mafia.

A 2008 report of the U.S. Congressional Research Service prepared for members and committees of the U.S. Congress acknowledges links of wildlife crime to other organised crime. It also mentions that numerous sources point out that organised criminal syndicates, insurgency groups and military units are among the primary actors involved in large-scale, commercial-sized wildlife trafficking. 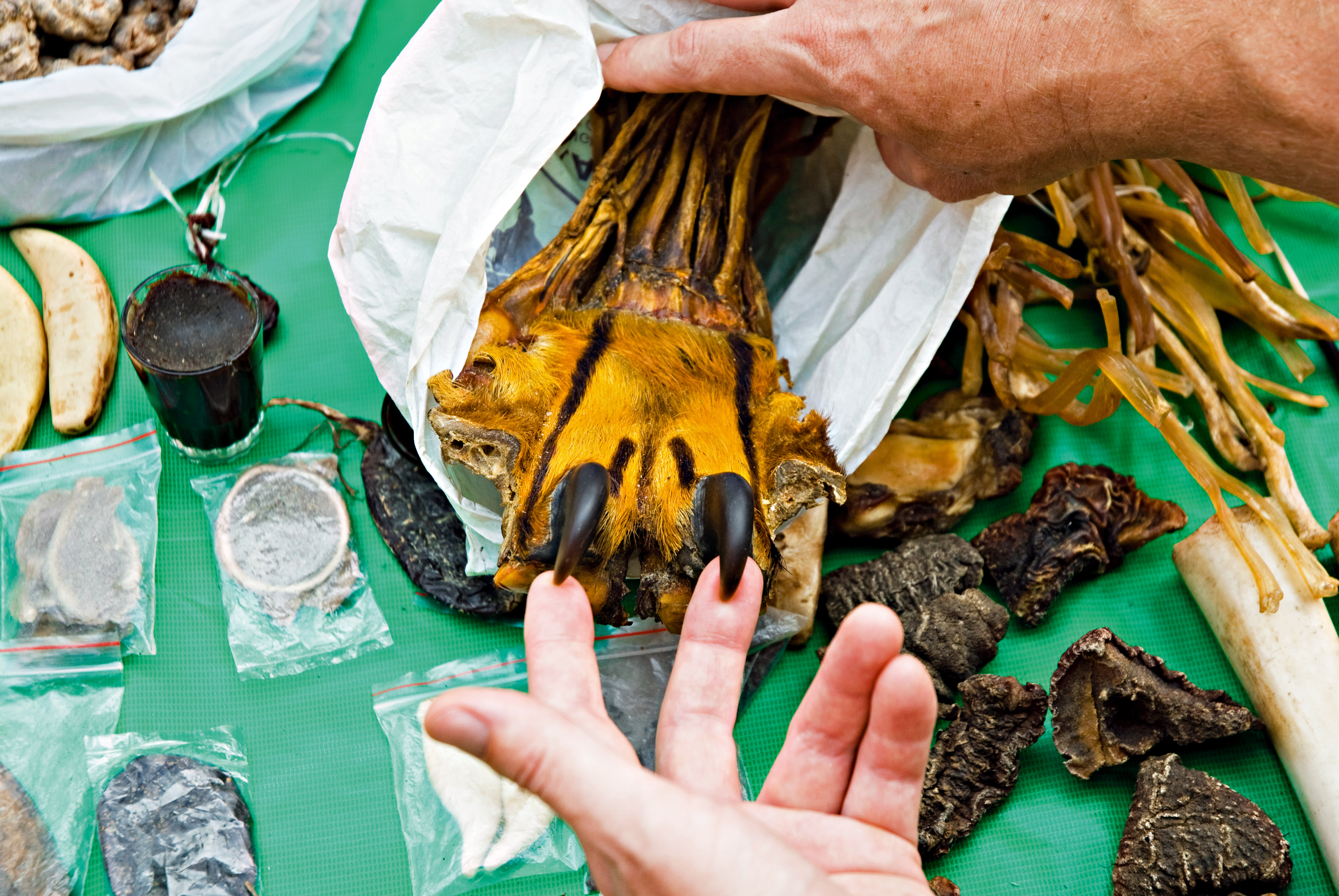 A typical market day in Mong La, Shan State in Myanmar, where tiger paws, teeth and other wildlife body parts are available for sale. Surveys by TRAFFIC, the wildlife trade monitoring network, revealed skin and bones, canines and claws from almost 200 wild cats, including at least 107 tigers, in Myanmar’s wildlife markets. Photo: Dan Bennett/ Foter.com/CC BY.

It's not just horns and skins that are traded. Red sanders, a timber species endemic to India is being smuggled out to China and other destinations in Southeast Asia and East Asia. Many a time, forged custom papers are used, sometimes the consignment is concealed and misdeclared. In one case, the seals of the container were replaced and the contents changed, in another the entire container was replaced with one carrying the same serial numbers! All this clearly reveals a level of planning on the part of criminal rings that must surely be a cause of worry for enforcement officials.

Very little is known about the trade in medicinal and aromatic plants (MAPs) across India's borders, but anyone looking carefully enough will come across indications of rampant misdeclaration. Many high-value and regulated species find their way out under the name of common species.  Globally, the value of the illegal wildlife trade has been estimated by various agencies and experts to be between U.S. $5-20 billion annually, making it one of the most lucrative international criminal enterprises. However, as the UNODC points out in a recent report, “the environmental impact of this crime is much greater than the relatively small income it generates for criminals." Testifying at a hearing of the U.S. Senate Foreign Relations Committee in May 2012, John E. Scanlon, Secretary-General of the Convention on International Trade in Endangered Species of Wild Fauna and Flora (CITES), stated that, “INTERPOL and the United Nations Commission on Crime Prevention and Criminal Justice have both recognised the increasing involvement of organised crime syndicates in wildlife crime."

The role of armed rebel militias in organised poaching and trafficking of wildlife is also increasingly being reported from various parts of the globe. Adrian Levy and Cathy Scott-Clark, writing for the Guardian, U.K. in May 2007 mentioned that militants affiliated to al-Qaida, with bases in Bangladesh are operating in the vicinity of important wildlife areas in some of Indias Northeastern states. Their links with organised crime syndicates in China, Nepal and Thailand are well-known. Many men behind this illegal trade, often Bangladeshi in origin, are linked to militant groups in need of money and are eager to get into this trade. The names of Harkat-ul-Jihad-al-Islami (HuJI) and Jamaatul Mujahideen Bangladesh were mentioned in the article.

In September 2012, world leaders at the sixty-seventh annual meeting of the U.N. General Assembly voiced concern about poaching and the illicit trafficking of wildlife products as severe threats to the rule of law, governance and economic development. The U.S., as a Permanent Security Council member, concurred about “the harm caused by wildlife poaching and trafficking to conservation efforts, rule of law, governance and economic development." France emphasised the severity and negative impacts of wildlife crime. One of the strongest indictments came from Gabons President Ali Bongo who said, “Such organised crime is increasingly affecting the environment and biodiversity through poaching and illegal fishing. Gabon intends to strengthen its criminal justice system to combat this phenomenon. But such efforts will require a greater international legal cooperation."In response to record levels of elephant poaching in Africa, President Bongo directed the burning of Gabons seized ivory stockpile in 2012 after a full audit supported by the World Wide Fund for Nature (WWF) and TRAFFIC, the wildlife trade monitoring network.

The tremors of this illicit economy are increasingly felt across the globe. At the 16th meeting of the Conference of the Parties to the Convention on International Trade in Endangered Species of Wild Fauna and Flora (CITES CoP16) held in Bangkok, Thailand, on March 3 and 4, 2013, member states addressed a wide-range of issues, including: ensuring high-level political engagement; enhancing international cooperation; coordinating enforcement support at global, regional and national levels; deploying a wider range of operational techniques and enhancing enforcement effectiveness. 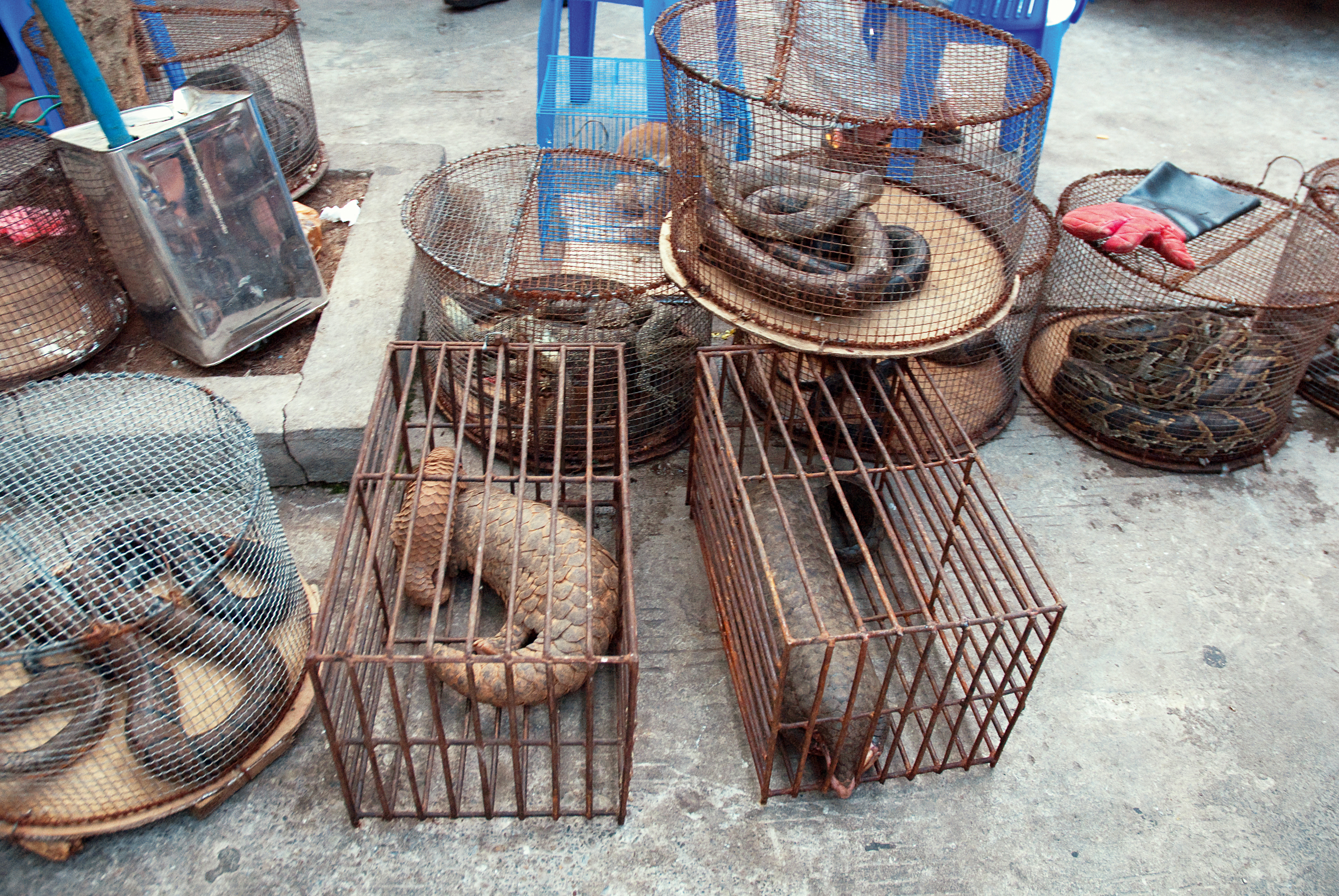 Chinese tourists often travel to Myanmar to eat at restaurants where you can choose live wildlife that range from sun bears and pangolins to snakes kept in cages on the sidewalk and then ask the chef to kill and cook it. Most are endangered species from Myanmar’s vast tracts of virgin forest though some are even trafficked from as far away as India and Nepal. Photo: Dan Bennett/ Foter.com.

In India, at the state level, it is primarily the Forest Departments that must address such threats. However, they are not fully attuned to, or adequately prepared to meet the new dangers that such crimes present to national security. Besides, the Forest Departments and most other agencies have little orientation as to the serious nature of such wildlife crimes. And they lack the training and experience critical to counter such crime effectively. In the absence of intelligence-driven enforcement, theirs is largely a hit-or-miss affair. Nor are their levels of institutional support any real match for the high-risk players on the wildlife crime roulette circuit. A visit to most anti-poaching camps across the country reflects this lack of priority and poor infrastructure.  Arms and ammunition, if provided, are not sufficiently backed by legal and administrative protocols for their use, leading to situations where staff has refused to carry weapons provided to them, for fear of reprisal.

Despite Indias rich biodiversity and the harsh challenges faced by frontline staff and field officers, there is no national-level reward and/or acknowledgement for those who constitute the nation's first line of defence against the plunderers of our natural bounty. For the police and other agencies in the law enforcement business, wildlife crimes are perhaps at the bottom of the priority ladder. Yes, there are signs of changed attitudes in recent times, but not nearly fast enough to make a significant dent in the illegal wildlife trade.

Nevertheless, India is the first country in the region to have established a Wildlife Crime Control Bureau at the national level, though the Bureau is still in its infancy. Agencies like the Directorate of Revenue Intelligence (DRI) of the Department of Customs have done some valuable work in tracking such wildlife criminals and disrupting their networks. Hopefully, we will see more cooperation and coordination among enforcement agencies.

Clearly, these cameos by themselves are not enough. The highest levels of law enforcement administration in the country need to clearly acknowledge the severe threat that illegal wildlife crime poses to national security and gear up all institutions and agencies to respond appropriately. Collaboration with neighbouring countries, which serve as transit points and markets for wildlife products from India, is vital. The recent establishment of the South Asian Wildlife Enforcement Network (SAWEN) to strengthen regional wildlife enforcement should be an important step forward in this direction. India needs to lead this process. 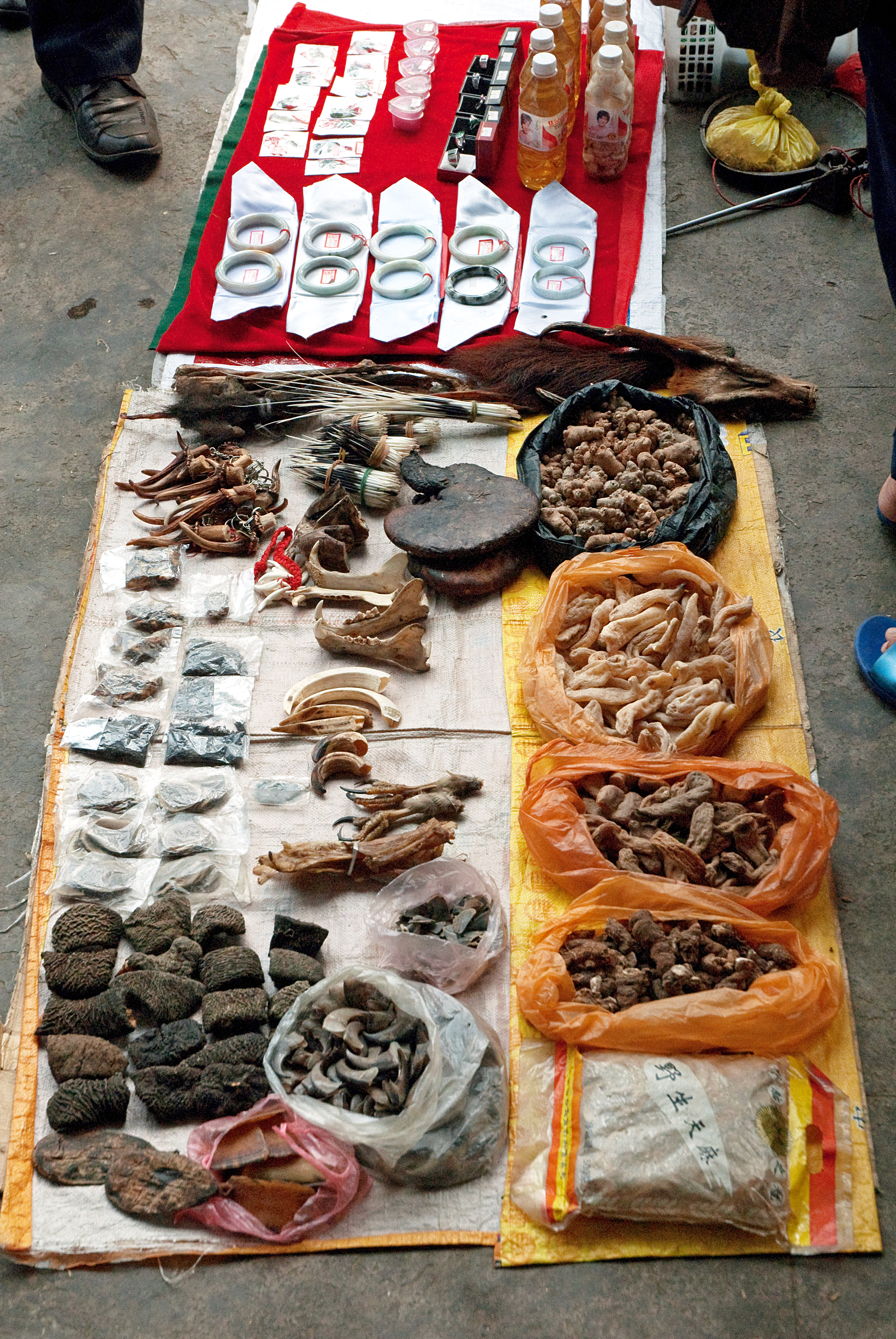 Once poaching was mainly small, local, sporadic and for the pot. Today, it transcends national and international boundaries, and like any other mainstream criminal activity, is well-organised, well-funded and ruthless. Photograph by Dan Bennett/ Foter.com/CC BY.

The International Consortium on Combating Wildlife Crime (ICCWC), comprising the CITES Secretariat, INTERPOL, the U.N. Office on Drugs and Crime (UNODC), the World Bank and the World Customs Organisation (WCO), is another significant, global effort to bring coordinated support to wildlife law-enforcement agencies on the regional, and sub-regional level. India must engage proactively and take advantage of such efforts.

It stands to reason that organised crime needs an organised response. We cannot continue to fight 21st century crime with a 19th-century mindset or tools.