Khaara Village, Madhya Pradesh
One of the central aims of the Stop Slaughtering Wildlife campaign has been to recognise grassroots conservationists and communities, each of whom are contributing steadfastly to biodiversity conservation and community engagement to create awareness about the impact of degradation of habitats and the commercial trade of wildlife species.

We’ve recognised four such villages and communities, one of whom we’ll tell you a little about in this update! 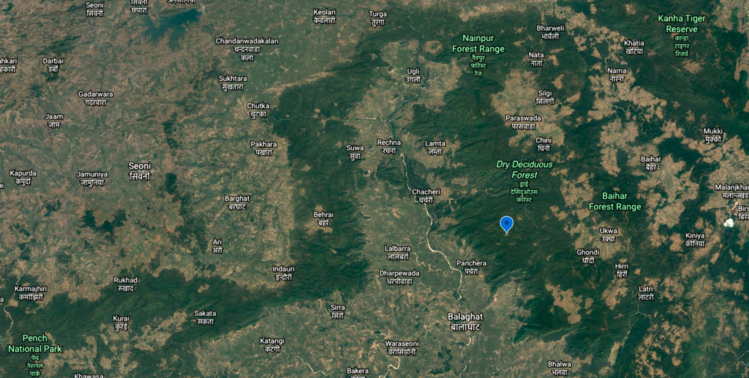 The corridor between Kanha and Pench Tiger Reserves, popularly referred to as Kanha–Pench corridor (KPC), covers an area of approximately 16,000 sq. km. It lies in three districts of Madhya Pradesh – Balaghat, Seoni and Mandla. More than half of Balaghat district is covered with dense forest making it the district with the highest forest cover in the state of Madhya Pradesh. These forests have presence of tigers, leopards, sloth bears, dhole and hyena (Jena et al., 2011). The corridor is actively used by dispersing tigers (Sharma et al., 2013), and has been identified as a refuge for other mammals including the leopard, dhole, gaur, sambar, and chital (Vattakavan, 2010).

Collection of Non-Timber Forest Produce (NTFP) is one of the common income generation activities in this corridor, with established market linkages in place for a number of products such as tendu leaves, mahua flowers, sal seeds, and bamboo harvest. Collection of these requires the local communities to venture into the forests for several kilometres, increasing the chances of encounters with wild animals. Other domestic activities, such as grazing of cattle, collection of fuelwood, wood collection for building houses, and bushmeat hunting also increase the risk of confronting wild animals. Depredation of livestock by big cats and crop-raiding by wild herbivores and wild pigs often result in retaliatory measures being adopted by the local communities.

The remoteness of these areas, lack of primary healthcare, inadequate connectivity with nearby cities and lack of easy access to developmental schemes has created an environment where local communities feel neglected from the main stream and thus are often made easy targets by the poaching mafia. Unless these communities are provided with sustainable alternatives to earn livelihoods that are not dependent on the exploitation of forest resources, the future of these communities and wildlife in these areas is bleak. Khaara is one such village nestled in the dense forests of the Kanha Pench Corridor in South Balaghat Forest Division. It is a small village of around 25 households of the Gond community. The village is 25 km. off Balaghat-Laugur Road, which is accessible through mud road that passes through beautiful and dense forest which as good as the core zone of Kanha Tiger Reserve.

Gaur, four-horned antelope, barking deer, sambar are seen in good numbers clearly indicating its potential as a tiger habitat. Khaara villagers only practice paddy cultivation in the meagre land they own. This crop is prone to crop raiding as the village is entirely surrounded by forests on all four sides. However, this disadvantage can be turned into an advantage by promoting a community-managed tourism venture. The village has a lot of enthusiastic youth. The Corbett Foundation runs its medical programme in this village (and other five villages in its vicinity) and have often discussed this option with them. The good news is that this community has shown interest in being a part of this venture.

This village has the potential to be a model of responsible wildlife tourism that is managed entirely by the local youth (women and men) in collaboration with the Madhya Pradesh Forest Department. There will be a host of various livelihood trainings imparted to these youth that will help them earn sustainably through the year.

We have appointed Dikesh Chaudhary - Project Officer (Sustainable Livelihoods - Kanha) with The Corbett Foundation as the campaign coordinator in the Khaara Village. He has a Master's in Social Work and and an experience of over three years in livelihood-generation and in working with communities living in and around the Kanha Tiger Reserve.

Your support means a lot to us. Do share this campaign with people you know, they can read about it here. We know these are difficult, unprecedented times, no amount is too small, and every contribution matters!