This graphic account of a tribal hunt is not a pretty story. In fact, it is downright disturbing, particularly to those who understand that ‘traditions’ based on the existence of virtually endless forests are now adding to the press of extinction for species whose habitats have been whittled down by urban demands, including mines, dams, roads and altered land use.

The call came in on  December 16, 2011, at 2:45 p.m. A group of Santhal tribals from the Hooghly district of West Bengal were about to embark on a wild cat hunt. I had long heard of these hunts and was curious to know why they hunted and what their modus operandi was.

On joining them I realised that my mental picture of ‘tribals’ was completely outdated. Yes, they were Santhals, classified as a Scheduled Tribe in India. Yet their attire was no different from most of us. By the time I caught up with them, the group had already identified the burrow of an animal, which was being closely inspected for clues. Three young boys were part of the hunting team, but they said that they were not really there to learn how to hunt, rather they just wanted to experience the thrill of the chase.

Once they established that the burrow was actually occupied by an animal, they began piling up dry leaves and other vegetation on the entrance. The idea was to smoke the animal out into the open and identify other emergency exits.

Sure enough, the tell-tale smoke revealed another strategic exit, which was promptly guarded by men armed with sharp sticks.

In addition to sticks, Santhali hunters use unique bows and arrows with the string drawn from bamboo strips, not the intestine of an animal. The arrow tips are crafted from cheap cast iron. 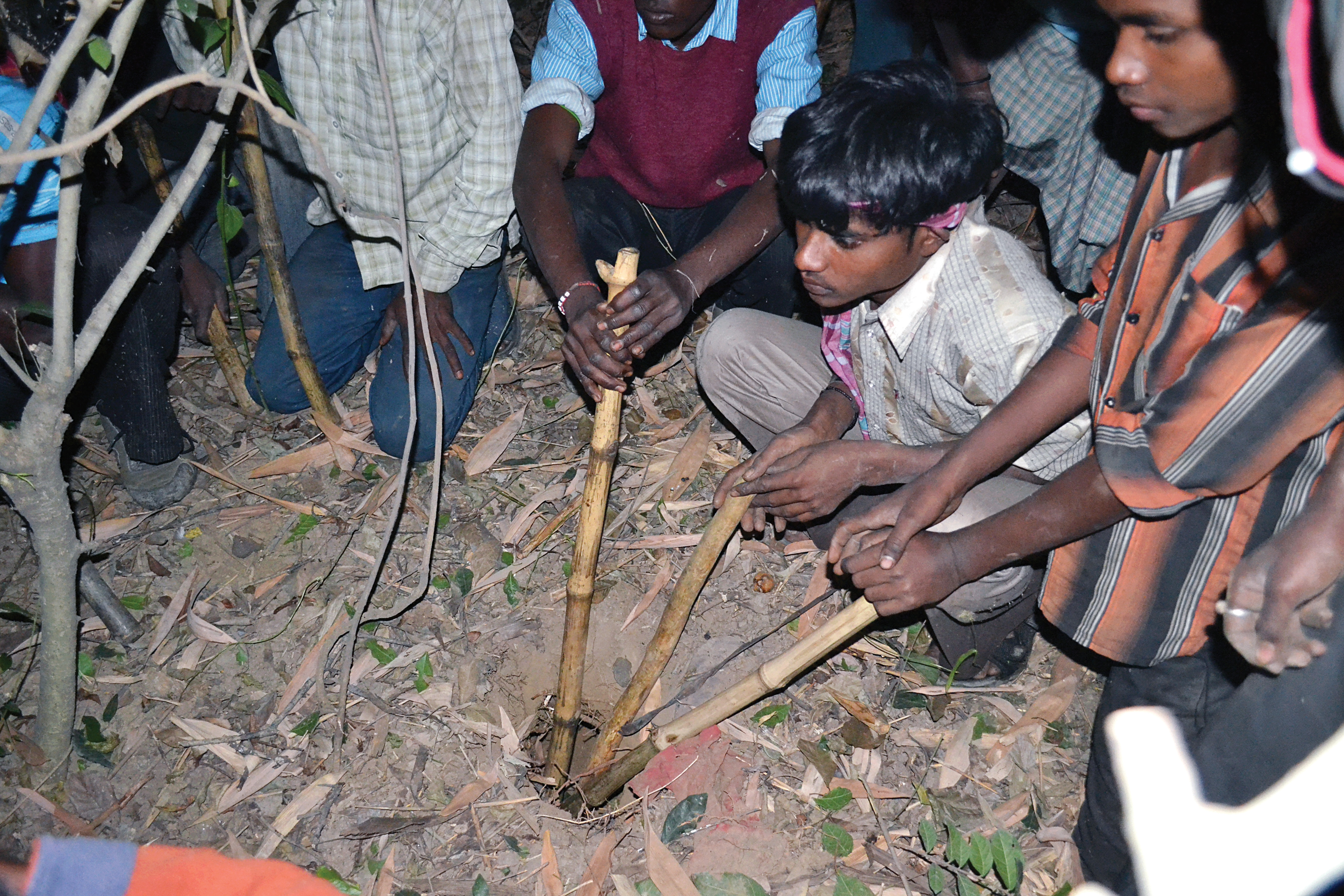 Machetes and spears are thrust into the burrows of unsuspecting animals until the animal has no choice but to leave its hideout. The hunting team crowds around the burrow, ensuring that there is no escape route for the animal. From their vantage point, they can see the hapless cat thrashing about in its burrow and can anticipate its next move.

The hunt, I noticed, was all about patience. The men had no option but to wait for the animal to emerge. In between, they would thrust a spear deep inside the burrow in all directions and then inspect the metal tip for signs of blood, or fur. To confirm that the burrow was actually occupied, a thin stick was inserted into the hideout and if it moved, the animal was clearly ‘at home’.

In this case, the animal refused to be flushed out, so the group began to dig into the burrow, with eyes trained on all possible escape exits. Soon the hapless animal could be seen moving desperately about below the soil, and its head and face were visible. It was a jungle cat Felis chaus! The group made way for their best ‘spear man’ while another wielded an axe as ‘back up’. The cat bit on the metal shaft of the spear in a vain bid to escape. But it had no chance at all. The spear did its job ruthlessly, quickly. And a magnificent creature was lost in the name of tradition and festivity.
With the spear still embedded in its belly, swift blows to the head with a bamboo pole were administered ‘to make sure it was dead’.

I had gone willingly to witness the whole process, but was shattered by the casual ease and was left wondering how many such ‘traditional hunts’ across our country continued to take a daily toll on our vanishing wildlife. 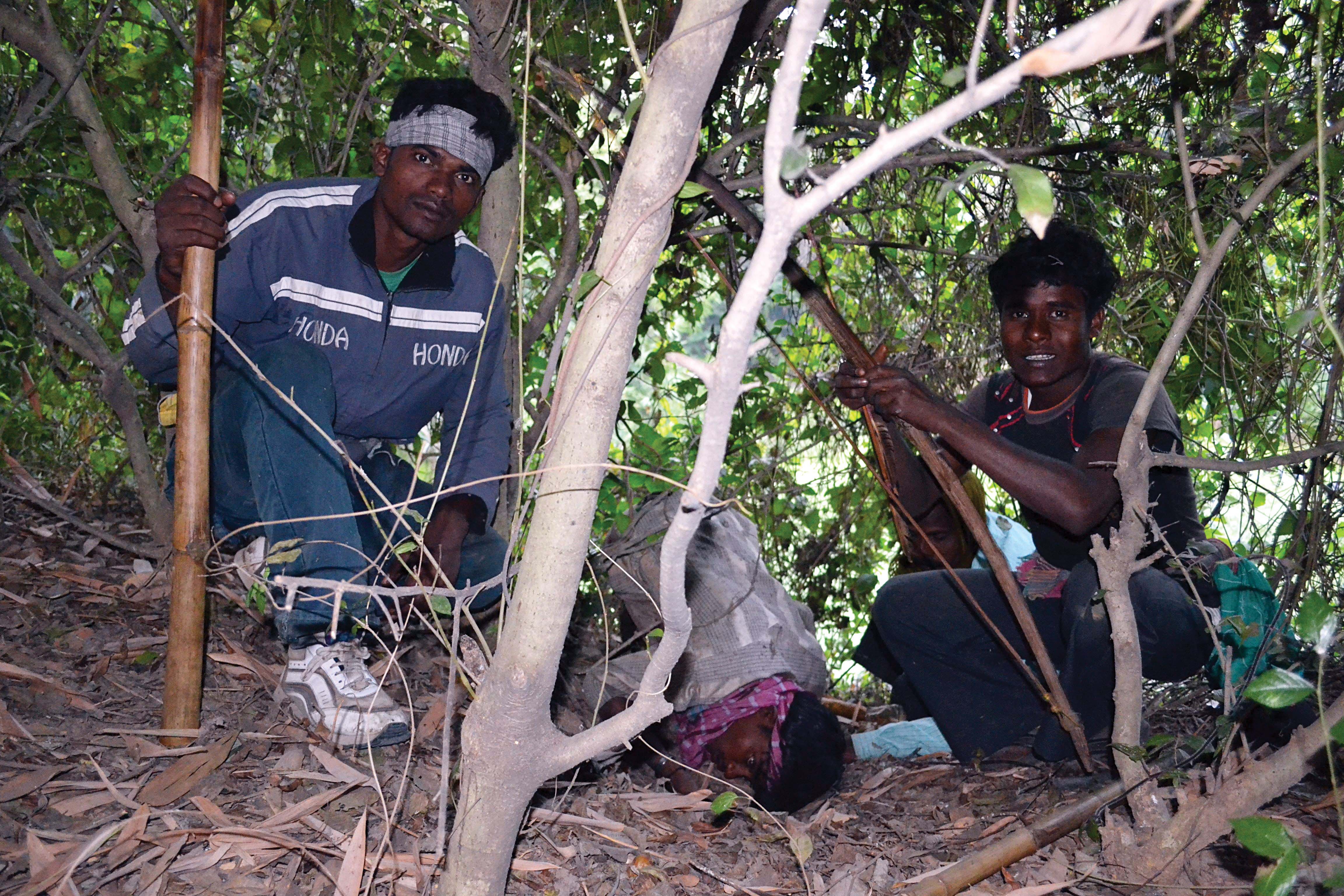 The hunting party of Santhals first identified the burrow of an animal and closely inspected it for clues and prepared their game plan. These three boys who came with the hunting group claimed to have joined just for fun. Hunting, they say, is all about patience and the thrill of the chase. The goal is no longer sustenance; it is only for the adrenalin rush of a successful hunt.

What can be done?

I run a wildlife conservation NGO, Simultala Conservationists, which seeks to create awareness on the issue of snake bites, wild animal rescues and to offer education to rural communities on conservation. We also try to engage and dissuade tribal communities from indulging in such hunts.

In 2008, I had confronted a large hunting party of Santhals at the Nalikul Railway Station, in the Hooghly district of West Bengal. Six adult wild jungle cats, three less-than-one-month old jungle cat cubs and one mongoose were confiscated from them. The problem of bush meat collection cannot be curbed, leave alone stopped, by the mere promulgation of the Wildlife (Protection) Act, 1972. I took the hunting party to the nearest police station, hoping it might intimidate them, but it had little or no effect. The hunters knew nothing about the Wildlife (Protection) Act, or why a particular species was listed, or why its conservation was important. One Santhali boy asked me what I was doing about wild cats that they saw run over by vehicles each year, probably twice the number the Santhali hunted in the same amount of time. I had no answer.

After seizing their hunting equipment and their day’s trophies, I filed a report with the Forest Department Officer in my area, informing him that an autopsy of all the animals killed would be carried out the next day under the supervision of a Government Veterinary Surgeon. The autopsy performed by Dr. Gautam Kumar Nandy at Nalikul was an education unto itself. 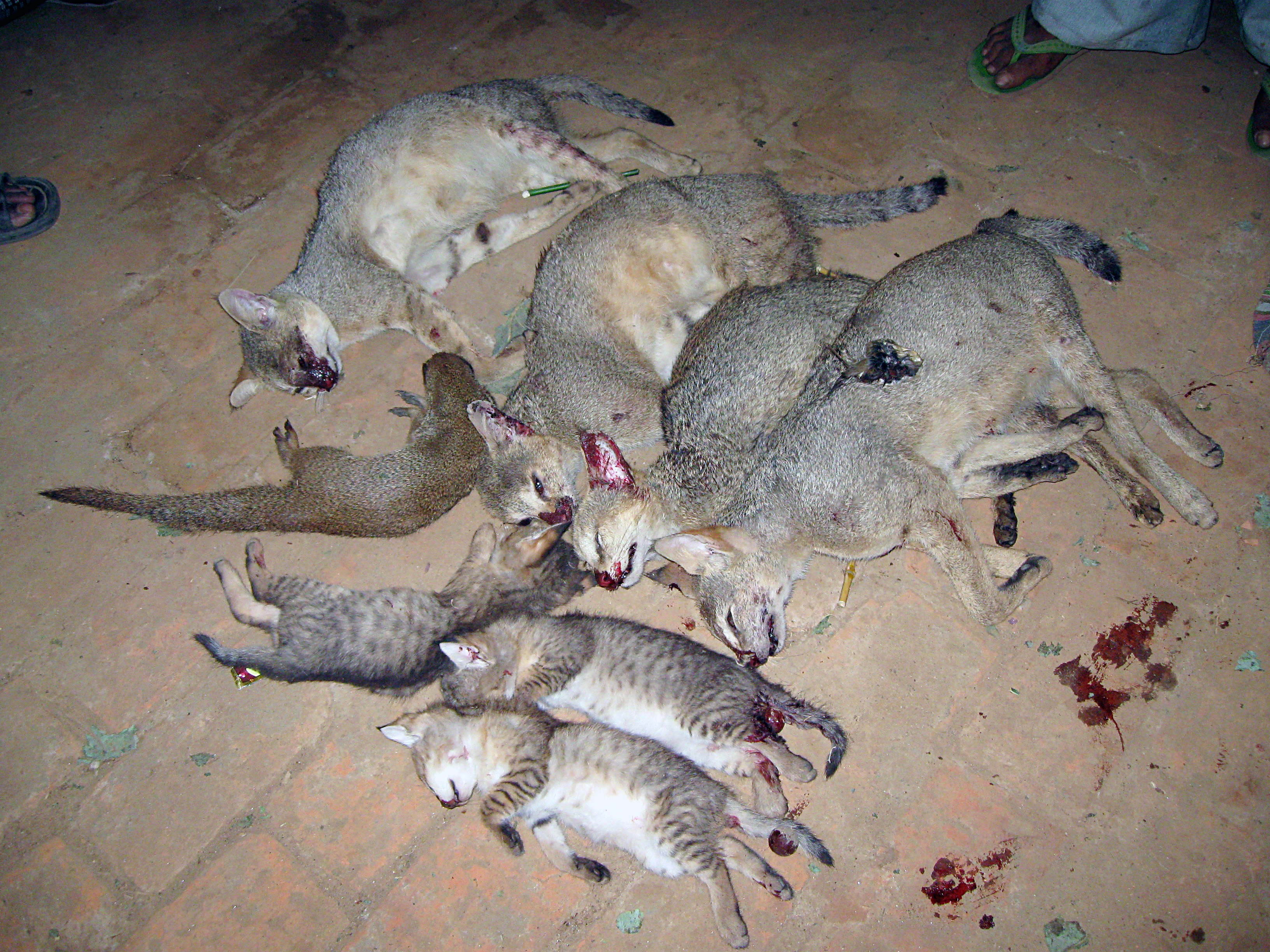 In 2008, the author had confronted a large hunting party of Santhals at the Nalikul Railway Station, in the Hooghly district of West Bengal. Six adult wild jungle cats, three less-than-one-month old jungle cat cubs and one mongoose were confiscated from them. Autopsy reports revealed that 85 per cent of the stomach content of these wild cats contained rodent bones, highlighting their role in keeping the rodent population under control.

The carcass revealed rodent bones that highlighted the role of wild cats in controlling rodents in and around agricultural fields. I have kept track of such autopsies and found that 85 per cent of the stomach content of wild cats contained rodent bones.
A major problem with the hunting traditions of the Santhali tribes of West Bengal is the fact that their hunts coincide with the breeding season of wild cats. Without let or hindrance, nursing mothers or pregnant females, even kittens, are slaughtered.

I guess there is really no way to stop this. At best we can engage them, explain to the younger lot about the true impact of what they are doing, while simultaneously working to ensure that their youth are educated and gainfully employed.